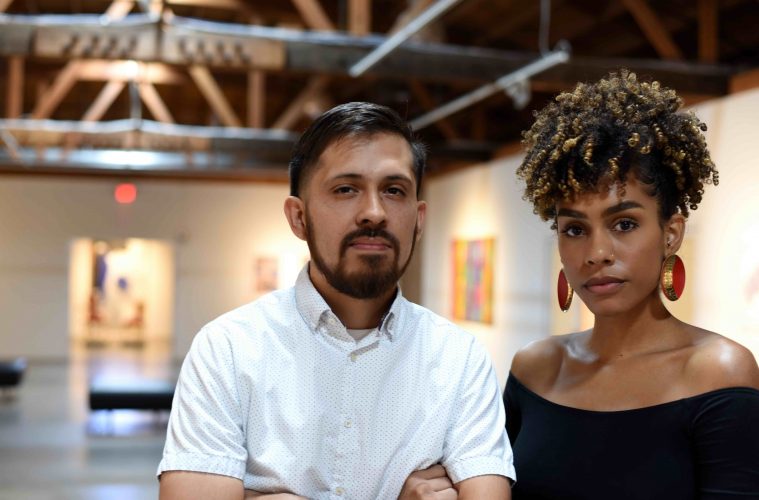 As Roosevelt Row undergoes drastic changes, Modified Arts has been a bedrock, although not without going through its own evolution. Founded by longtime community leader Kimber Lanning, it embodies the spirit of downtown Phoenix in its ability to persevere and adapt.

Modified Arts started out as a music and performance venue in 1999 and transitioned to an art gallery in 2010. Local First Arizona and its offices took residence in the space in 2013, allowing the gallery to be open full time. In 2018, it went through renovations that would define the storefront gallery as what it is now.

Through it all, Modified Arts has shown some of the best contemporary art in the Valley. This is thanks to the people who put in the hard work behind the scenes. It continues to evolve and looks to the future by entrusting its programming to two individuals with diverse backgrounds: Merryn Alaka, a transplant from the Midwest, and Miguel Monzón, a first-generation Mexican-American who grew up in Phoenix.

As such a young city, Phoenix is not burdened with tradition like other major metropolitan areas. These two up-and-coming artists/curators in the local scene embody the forward thinking that Modified Arts has always been known for. Both fresh out of art school, they have been learning on the job, with a knowledge of the past and bright eyes toward the future.

Merryn Alaka was born and raised in Indianapolis, Indiana. Her Nigerian father was in the pharmacy program at Purdue University when he met her American mother, then studying nutrition and dietetics. They would marry and have three kids, with Merryn being the youngest. Her immediate family was more into the hard sciences than the creative arts. However, Alaka had an aunt, a practicing artist, who made an impression on her as an adolescent. “I didn’t have a direct art influence in my immediate family,” she said. “Growing up, I always wanted to be really close with my cool aunt. She is actually an artist. I definitely admired her – I thought she was really great. She mostly did collage-based work. I looked up to her and was inspired by her.”

Alaka became even more interested in art when she attended a high school specializing in the arts. Eventually she would enter the Herberger Institute for Design and the Arts at Arizona State University. She was attracted to the quality of the program and the fact that it was far from home. She would be challenged by her professors to create work that she cared about. “I had a critique in class once,” she said. “My teacher just totally tore my work apart and was like, ‘This doesn’t even seem like something you’re passionate about.’ After that critique, I cried.”

Alaka would grow as an artist in school by overcoming adversity. She would look within herself to examine what she was passionate about. Her father always had an appreciation for art, especially art from his hometown of Lagos, Nigeria, such as rugs and textiles. Alaka began exploring her heritage diligently and would be inspired to make work about her unique background.

After her parents divorced, Alaka grew apart from her father, but her renewed interest in her family history rekindled their relationship. She would take old family photographs and incorporate them with African motifs, creating pieces that were aesthetically seductive but evocative of a deeper personal history.

Being a transplant, Alaka was not yet aware of the thriving art scene in Phoenix and saw Modified Arts as a way to get involved. She started working at the gallery just as Miguel Monzón was taking over as director for the space. “Miguel and I, we get along really well,” she said. “I think we make a good pair at Modified. We kind of had the same idea for the type of work we wanted to show at the gallery. We wanted something unique each month or something different. We didn’t want to just have painting shows or drawing shows. I mean, we do those, but we also wanted the work to have some conceptual meaning.”

Miguel Monzón was born in San Bernardino, California. His parents came to the U.S. from Mexico, making him a first-generation American. His family moved to Las Vegas for a couple of years, then on to Phoenix for good. Monzón grew up in the Valley and feels much affection for the area. “When people ask me, ‘Where you from?’ I’m just like, pretty much I’m from Phoenix, man. I grew up here. All my youth was spent here. I was on the streets skating, you know – Phoenix is home.”

He drew voraciously growing up. He would render people and creatures from real life as well as his imagination. After high school, Monzón started attending community college. He knew he had the talent for art but that things wouldn’t come easy. “It was that whole period of what are you going to do with your life?” he said. “I was aware that art was not an easy path. It was going to be a lot of work. You’re going to have to be self-motivated to do this. No one’s going to make you do anything. I just decided to go with art and follow my passion. I started trying to learn about art as much as possible. Honestly, I didn’t set foot into a museum until I was like 18.”

This delayed exposure to the arts would not deter Monzón, it would just make him even more determined. He started watching documentaries about art, reading books about artists, and, of course, going to art museums. He came at art with a fresh outlook. He learned about the tradition of painting and the masters, but he was attracted to the ideas conveyed by the work.

“I realized that I was more interested in the concept or what was behind the work,” he said. “What is it that made you make this piece? What does it mean? So because of that, I chose to go into intermedia. Then also, I had learned about these other artists that were doing work that’s not just something on a wall. I was interested in learning more about non-traditional art, so that’s when I transferred to ASU.”

Monzón as a maker is not tied to any medium. He works in all kinds of media, from drawing to printmaking to video. He chooses the medium that will best express his ideas for each body of work. This leads to the creation of diverse artworks. He is always experimenting with materials and ideas, relentless in his pursuit of a higher truth, but always remembering where he came from.

Alaka and Monzón took all the knowledge learned in school and put it into practice when they started working at Modified Arts. They both had a willingness to learn and a positive attitude of wanting to contribute to the art scene. Kimber Lanning took a chance on them, and they’ve been paying dividends since then.

“I was basically assisting Connor Descheemaker (Modified’s former gallery director),” Monzón said. “Trying to absorb what it’s like to run an art gallery. At the time, he was working for Local First also. He was just inundated with work, and then he was doing Modified on the side. Anything I could help with – that was what I was there for.”

“It’s been great to have the support from Kimber Lanning,” Alaka said. “She leaves a lot of the things to us, but she’s always been so supportive. She wants us to use the space however we see fit.”

They put forth their vision of what they want to show at the gallery in a thoughtful manner. The first show Monzón fully curated was called Within and Without, a printmaking group exhibition that explored the artists’ inner visions and how they relate to the external world.

Alaka curated one of the most important shows in Phoenix last year, Americana. It featured artists of African lineage, all based in Arizona, who were exploring racial identity in the context of our current political climate.

In the meantime, Modified Arts will be celebrating its 20th anniversary through a historical exhibition of photographs and memorabilia, along with a showcase of artists who have shown there in the past. It will be a celebration of the gallery’s standing in downtown Phoenix, but also an opportunity to speak about the changes that are occurring and what they mean for the future of the arts in the Valley.

“If there’s anything I can say about Modified,” Monzón said, “the name’s perfect. That’s what we are. We are adaptable. We are fluid. We are very open, and I think that has to do with the fact that Kimber Lanning is the owner. I think since she runs Local First, and she’s so focused on local community and helping people in the local scene, it’s almost more about the community aspect of it. It’s more about allowing or helping people that maybe don’t have access to or know where to go to see local art to have a place to go. I think that really kind of captures what Modified is.”