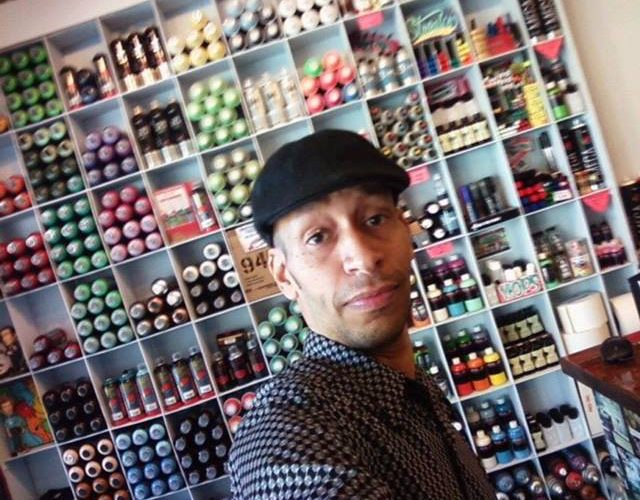 In Memory of Jules Demetrius 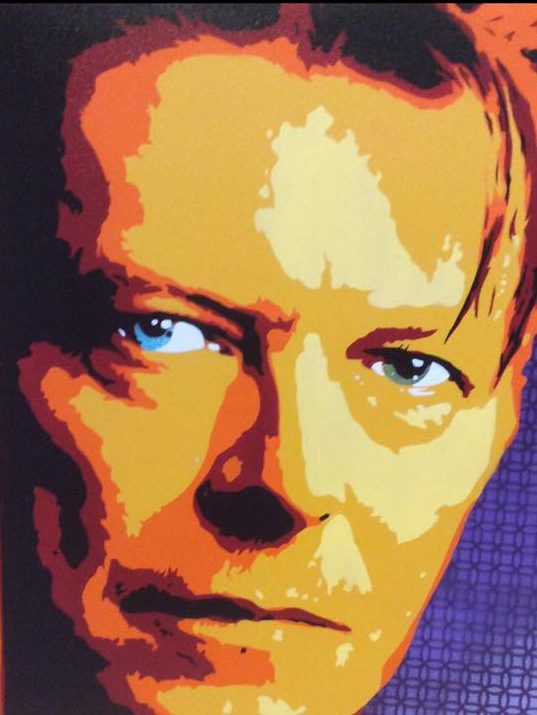 I sit in a room every night and write with a portrait of David Bowie watching over me. It was painted by Jules Demetrius shortly after Bowie’s death and since then has hung in whatever room I’ve written in. At the time I bought the painting, I had been following Demetrius’ work for a couple of years, but I only got to really know him during his final year.

You can know some people your whole life and they have little impact on you. Others you meet for 15 minutes and they change you forever. Jules fits into the latter category: a man who could shift your perceptions, even about his own imminent death, in a single afternoon. It was not only his art that spoke to people, but his dedication to his lovely partner, Shona, and his children, a love that was foremost in his thoughts while pursuing his artistic vision. Demetrius was dying the entire time I knew him and knew about him, but the man was magical, and this quality is reflected in his artwork. On December 3, 2016, Jules Demetrius lost a long struggle with cancer, but before he did, he gave us more gifts than we were worthy of receiving. 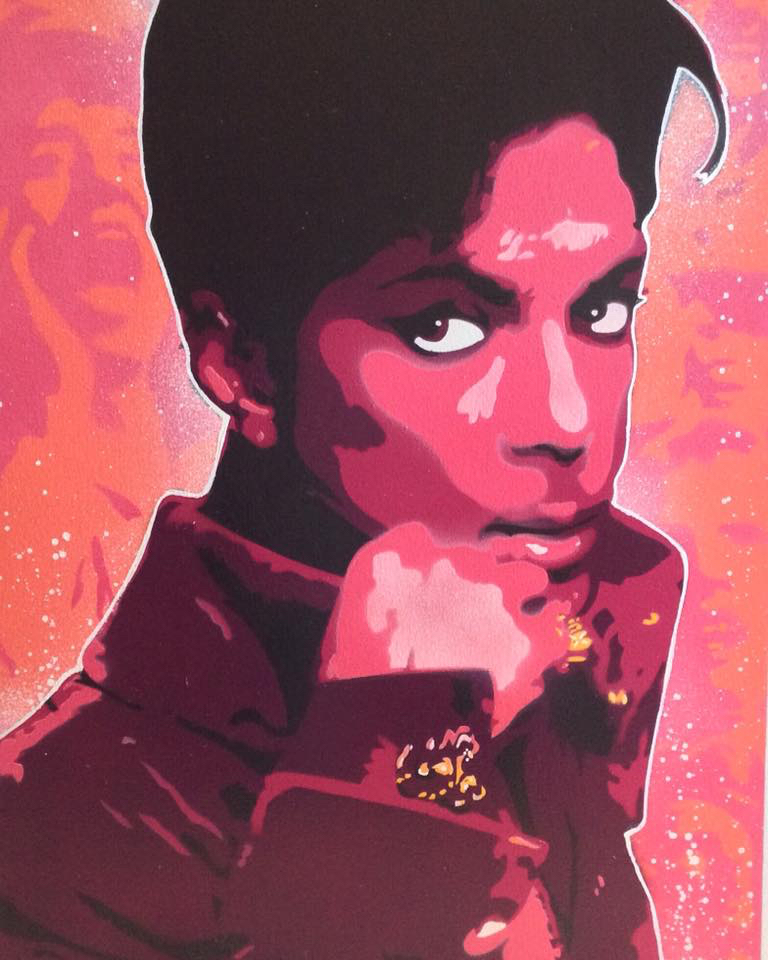 As a writer, I have a natural affinity for the arts, and while I mainly write about music, I have a similar passion for art, cinema, dance and theater. Although I don’t possess any musical talent, I am a painter and an artist (only secondary to being a writer), and I find the art that I like best is art I would want to make myself. Artists like Abe Zucca, Travis Fields and, yes, Jules Demetrius create works that I can relate to, because I identify not only with the finished product but with the process it took to get there.

Much like music, I suppose we gravitate toward art that we’d like to be able to produce ourselves.

Visual artists have the advantage that the meaning embedded in their work becomes emotional and symbolic to their audience. I have always loved Pop Art, and Demetrius was the master of that genre here in Phoenix. Considering my near worship of Andy Warhol, Roy Liechtenstein and the like, Demetrius’ spray paint and stencil work was sure to grab my attention. 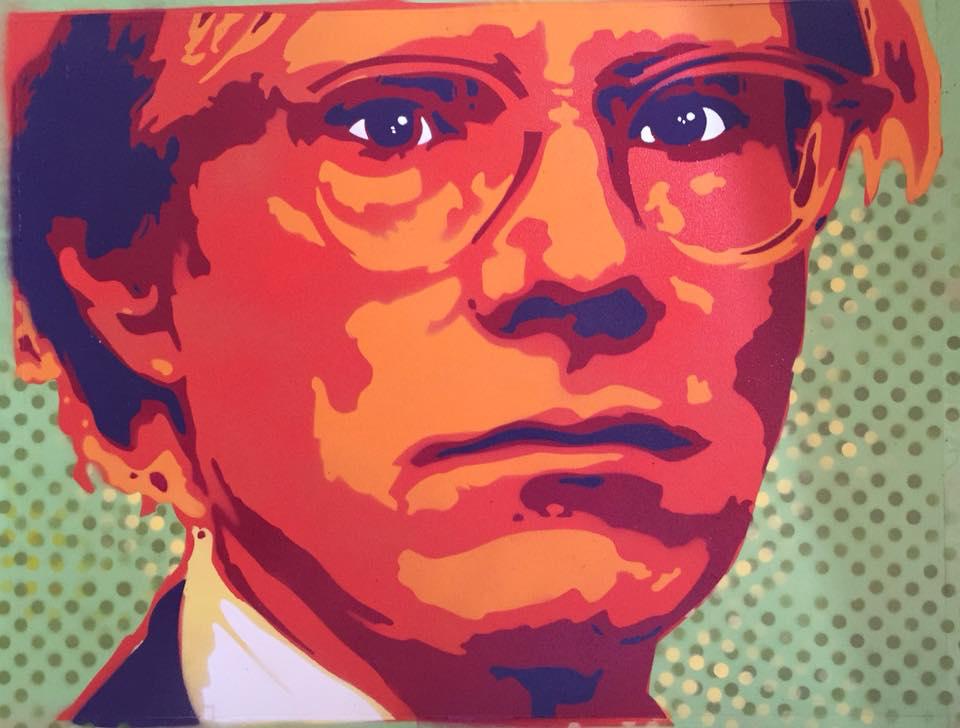 Demetrius didn’t just make Pop Art, though. He created original Pop Art in the way Warhol did, by making it political, expressing wry commentaries on society through the medium, and by confronting death through it. Look at his “Trump Ofay” series, or the dazed Sambo painting, and you can feel the meaning in the medium. There is this tenacious guerrilla quality to Demetrius’ work that you can practically feel coming out of the Krylon can. There is also a furious sense of urgency that adds to the work and never undercuts the quality.

In the wake of David Bowie’s death, Demetrius made a series of Bowie portraits, and it was a beautiful body of work. After seeing one of the pieces in person at a Tempe Art A Gogh-Gogh event, I couldn’t stop thinking about it for a week. I hit him up, got a price, and we made plans for me to pick it up. Demetrius was sharp—he quoted Bowie lyrics when he let me know it was ready. Now, it’s one of my most treasured paintings.

Demetrius’ life and livelihood were his art, and in the end, his hard work was committed not only to art but to his loved ones, as well. He was a very talented artist whose work will continue to inspire for years to come, but he was also a brilliant human being. I mean brilliant in terms of being illuminating—he was a light bearer. 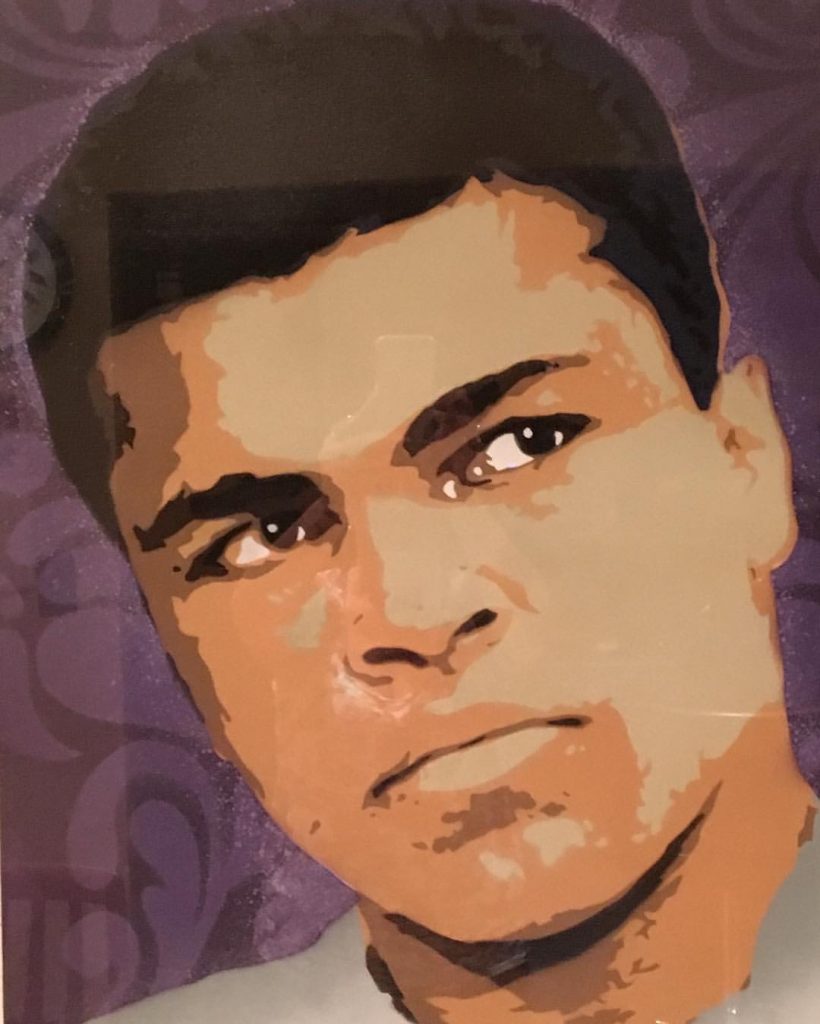 I befriended him at the intersection where my loves of music and art collided, while mourning the death of perhaps my greatest musical idol. In doing so, I was given the rare privilege of having a window into the final months of a dying artist. Demetrius’ painting of Bowie helped me at the moment I needed it most, but watching him come to terms with his mortality and how he faced it will inspire me for the rest of my days. I have known many artists who have passed and, like Jules, they do not often go gently into that good night.

I cannot help but think that the portrait series he was doing of Bowie, Prince, Ali and others who passed away this year helped him as much as they helped the people who happily purchased the works. It was another example of Demetrius staring death right in the face while working fiercely into the night, making portraits of artists and icons whose ranks he would join before the year’s end.

On Facebook, Jules documented as many moments as he could, painting, living, laughing, eating sushi and, yes, vulnerable with illness. He had four different types of stage 4 cancer, yet every chance he could, when not confined to bed or medicated beyond ability, he would paint. He would also spend time with his loved ones and get excited over milkshakes, sushi or a trip to the dispensary. While medical marijuana did not cure his cancer, it made his pain bearable enough that he could paint, eat and enjoy the moments he had. And the joy he shared in those moments, nearly every day, was palpable. Demetrius knew he was living on borrowed time, and he knew not to squander it. He didn’t spend a lot of time complaining or feeling sorry for himself. The man was on a mission. 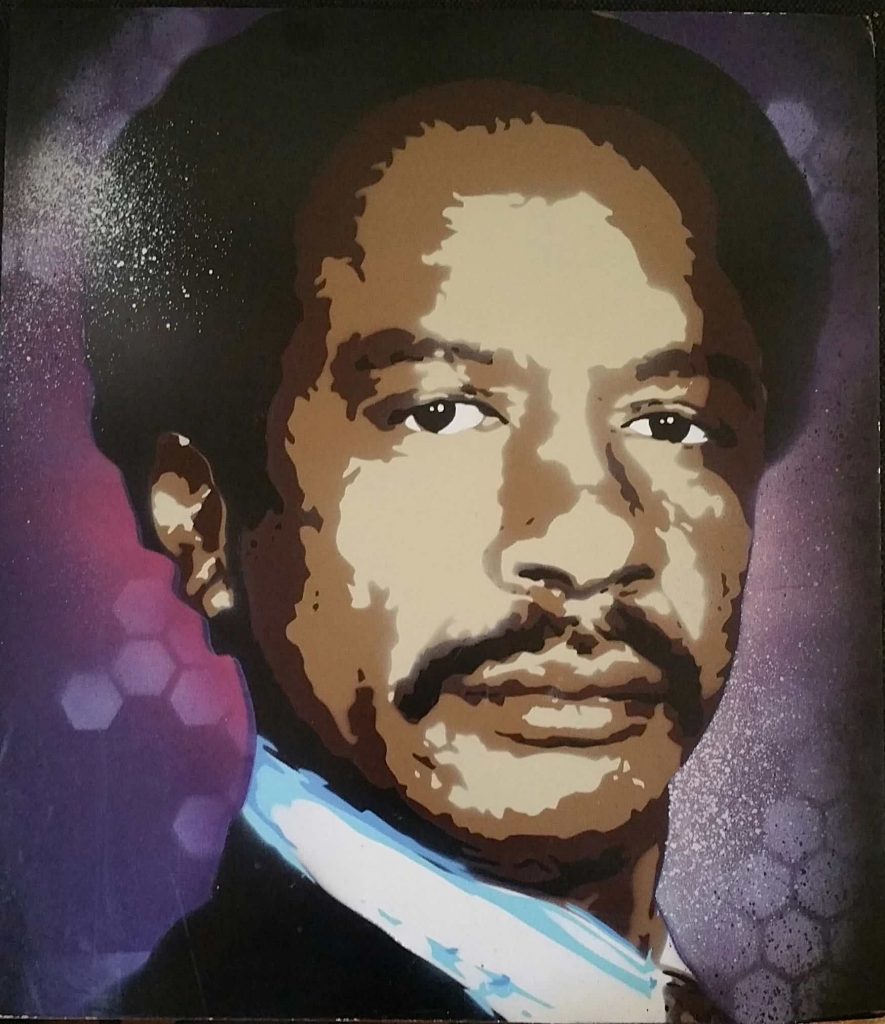 It’s difficult to express how inspiring it was to witness that. Every artist, writer or musician pretty much imagines working on their art until the day they die, down to the very end, to the last painting, novel or recording. Jules Demetrius did exactly that. He not only did that, but he proved on social media that it could be done, which is a powerful thing. He was sometimes overtly silly in the face of his nearing demise. He could be a total goofball and it was beautiful. It may be easy to inspire others with your life or your work, but to inspire them with the nobility and courage with which you face death is a far, far different thing.

The ambition that Demetrius had in his final years would last a normal person four lifetimes. He was a glorious star to our art community and to everyone who knew him or had a chance to be touched by him. He burned hot and bright, and we watched for every spark and watched as his taillights faded into the night. I have never before seen someone rage against the dying of the light quite like that. This may be Jules Demetrius’ greatest legacy in the hearts of those who knew him. May we all meet our maker with such ambition and grace.
On January 5, 2017, A Tribute to Jules Demetrius is planned at Crescent Ballroom. Further details will be available at www.crescentphx.com. 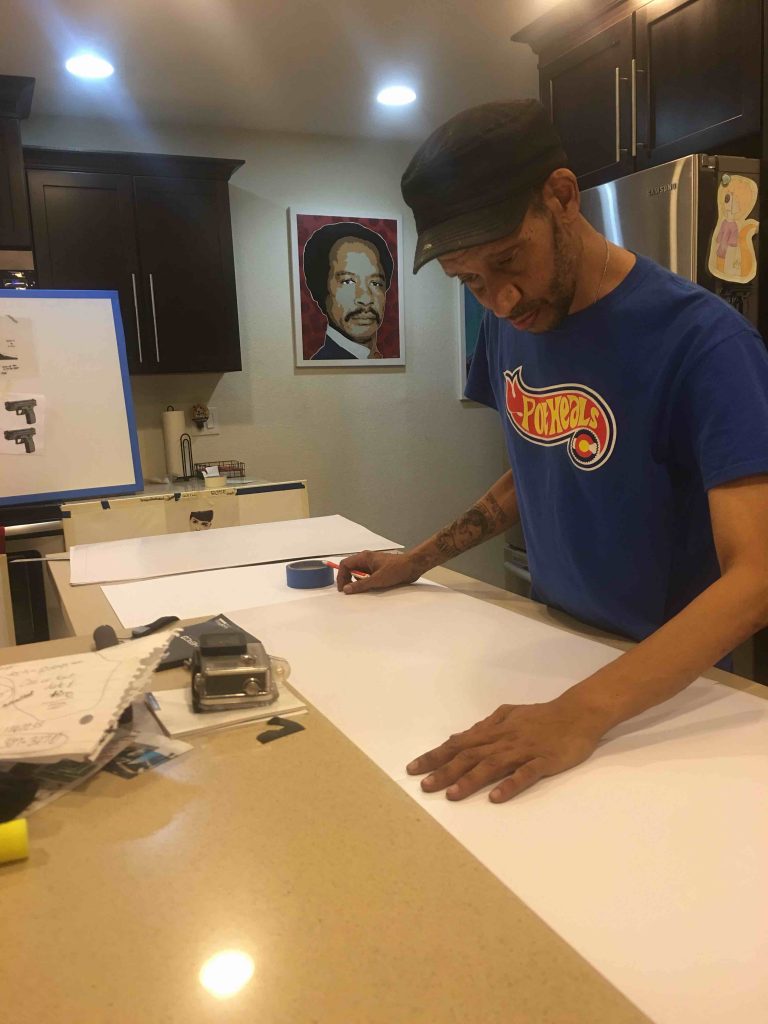