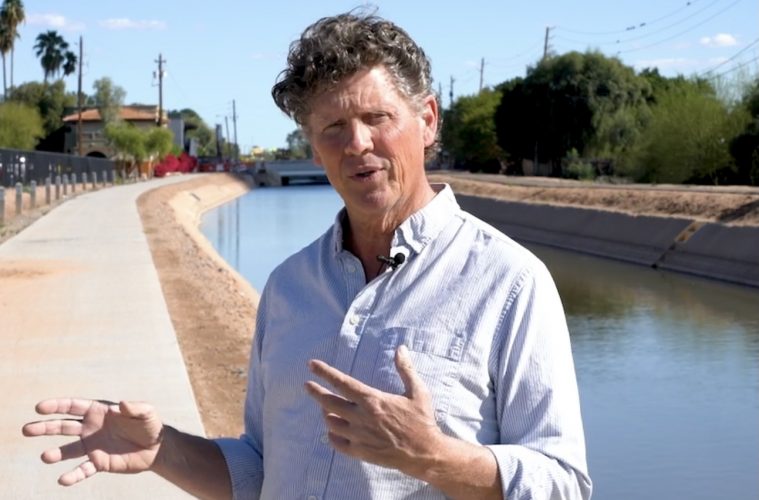 Irrigation is the sole reason the city of Phoenix exists today. Without a steady flow of water, the extremely arid land that now sustains the fifth most populous metropolitan area in the country would merely be a barren tract. Artist Richard Laugharn has created a new public art project called A Deeper Map that explores ancient canals and farmlands along the lower Salt River created by the native peoples that originally inhabited this region.

A Deeper Map is a mobile app that invites the user to discover where ancient irrigation canals and agricultural fields once existed in what is now the Phoenix metro area. In the app, moving the contemporary map to the right reveals a deeper ancient map of the Valley on the left. Moving the contemporary map back and fourth allows the viewer to see where, hundreds of years ago, canals and agricultural fields once existed where there are now schools, homes and workplaces.

Current residents of Phoenix are often surprised to learn about the scope and sophistication of the ancient irrigation systems in the lower Salt River Valley. When we think about historical cultures of the American Southwest, we tend to consider places like Mesa Verde or Chaco Canyon. While these sites and the cultures that produced them are amazing, what occurred here in the Salt River Valley from AD 400 to about AD 1450 was arguably far more influential.

The people who created this legacy have not disappeared. In fact, descendants of these tribal communities are still irrigating and growing food on some of the same plots today. New development has virtually obscured evidence of ancient irrigation, making the deep human history of the Valley quite abstract to the general public. Laugharn’s goal with this project is to foster a greater awareness of this legacy by inviting current Valley residents to contemplate a deeper map.

The mobile app has been carefully designed to facilitate map-based exploration. It includes the ability to change the way the contemporary map works, allowing viewers to choose which map mode best suits their needs. In addition, Laugharn and his team have consulted with experts in the field regarding content, which takes the form of videos and text, appearing alongside the maps to provide context as well as some remarkable stories.

The app does an excellent job explaining that “Hohokam,” the word most Phoenix residents are familiar with, is a generic archaeological term used to describe the ancestral farmers from the region. However, there is no need to use non-specific nomenclature when describing these innovative farmers. They were the O’odham people, whose descendants, the Akimel O’odham (The River People), continue to live and farm along the Salt and Gila Rivers to this day.