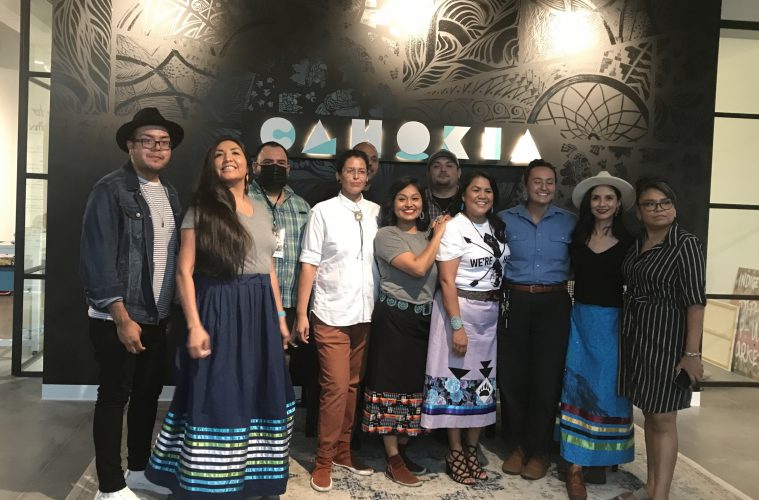 This is one of many, many ways that Eunique Yazzie (Diné, or Navajo), founder of Indige Design Collab, would choose to describe Cahokia, the new “female-owned, Indigenous-led social tech + art space” nestled on the first floor of The Link PHX off Pierce and 3rd Streets.

As a founding member of Cahokia, Yazzie says this softly and with a feeling akin to relief, the way one usually does when they step through the threshold of their place after a long day of work, relax their shoulders, and say, “I’m home.”

A board member of Roosevelt Row CDC who has been in the design industry for eighteen years, she’s familiar with this long day of work: the Navajo Nation lacks job opportunities in her field, and her field in Phoenix lacks representation and remains largely white-dominated.

So, the simile is important, because Cahokia is not a direct substitute for “home” or a replacement for anything else. Instead, it serves as an extension of what exists elsewhere, in other times and places, but hasn’t existed where it is now. That is: within the gentrifying, rapidly transforming urban core of downtown Phoenix, a collaborative space for Indigenous creatives to share their ideas, their talents, and their voice.

Organizationally, its structure consists of members who have access to the building and its facilities, as well as community ambassadors, who can also access Cahokia’s assets with the involvement of a member in their creative project(s). The range of represented professions within its current membership and ambassadorship runs from traditional artists and designers, to writers and podcasters, to small business owners, entrepreneurs, and consultants.

“The mission of Cahokia is to indigenize the space by offering artists, designers, and social entrepreneurs opportunities and a place to create and collaborate,” Yazzie says. “Another part of our mission was to amplify and uplift Indegnous design, art, and culture through pop-up events and retail.”

Cahokia stands on the shoulders of those who came before in more ways than one. The space itself rests on the ancestral lands of the O’odham and Piipaash, Indigenous people who still exist and reside in Arizona today, represented in some of the 22 federally-recognized tribes in Arizona such as the Salt River Pima-Maricopa Indian Community, as well as in some of those involved with Cahokia itself. Beyond this, Cahokia’s namesake and purpose draw directly from a historic convergence point of tribes that existed between AD 1050 and 1350 near what is now modern-day Missouri.

“Cahokia was actually a real place in time, before colonial contact,” explains Melody Lewis (Mojave, Tewa, and Hopi), Cahokia founding member and founder of Indigenous Community Collaborative, “where people would come to meet and exchange ideas, resources, tools—and innovate. So you would have coastal tribes bringing shells, you’d have present-day Mexico tribes bringing agricultural knowledge, and everyone would meet there.”

Cahokia in Phoenix was then born to revive the concept at a time and place it’s needed, “where Indigenous people come together to exchange ideas, and innovate, and really exist.”

The space itself is open, flexible, and light. From the front entrance, visitors are greeted with the future retail area, and faced with a floor-to-ceiling mural and an LED-backlit and fabricated logo design. Lewis and Yazzie, along with Cahokia members Jesse Yazzie (Navajo), Claudia (Mexican Indigenous) and Tashena (Diné) Lopez, Brian Skeet (Navajo), and community ambassador Jeremy Arviso (Diné, Hopi, Pima, and Tohono O’odham), all played various roles in the design and creation of the entrance display, demonstrating at the very first impression how integral collaboration is to the space’s concept. Nothing is done alone. Following this is the largest and most adaptive room that serves as an exhibition space and venue for music, performances, and film screenings, with a stage on the way.

Towards the back of the space are a few community meeting rooms and offices—allowing various stages of privacy or socializing—a contemporary break room, and open air workspaces. Perhaps most eye-catching is a media and podcast room, set to undergo sound treatment and already decked with equipment. The glossy setup of this room and its accessories hint at the true nature of Cahokia, of how much further it goes beyond traditional makerspaces that simply rent out space and time with pieces of equipment.

Adan Madrigal (Mexican Indigenous)—who is among many other things a videographer, editor, director, and Cahokia member who has been serving as an advisor to the project’s development—elaborates on how their goal is tied to service as much as it is to space: they provide the room and equipment for audio and video recording, but also offer to do more of the production work if requested as well.

“The whole concept of Cahokia is really trying to get people to use their voice, to really learn how to use their art and get it out there,” Madrigal says. “What we find is a lot of times that artists—especially Indigenous and Native-American artists—they don’t have an avenue to get it out there. A lot of them do, but—we’re trying to cultivate the artist. We have art that’s curated… we want to curate the artist.”

Cahokia further confirms this with the commitment to future partnerships, classes, and workshops, in addition to the countless events hosted by the space even before their grand opening, from pop-up markets to BIPOC art slams to live music shows.

Rocio Francis (Diné), a community ambassador and founding creator of Morning Mist Soap Co, has already coordinated and ran her first three-generation pop-up market, with her mother and daughter selling their own products alongside her. Cahokia not only provided her the space and opportunity to learn and apply new business skills, but will also provide the space and opportunity for her to then turn around and teach what she’s learned. She plans to use Cahokia not only to sell her soap and skincare products, which often feature homegrown ingredients with long-lived ancestral ties, but also to offer classes on the Indigenous practices she employs—practices that simultaneously provide healing for generational trauma.

In this fashion, Indigenous creatives and entrepreneurs will give as much to Cahokia as they will receive from it. Members have a stake in the planning and programming of the space, which they meet to discuss the direction of on a weekly basis. The way a room is used, the events taking place next month; everyone decides together.

A sociocracy, a solidarity economy, collectivism in action… however Yazzie chooses to describe it, she, Lewis, and all the others involved can’t emphasize enough how much of a role community plays in this venture, speaking to how integral the value is to their own cultures. And with this shared value, the group’s diversity—in Indigenous representation as well as in industry representation—only serves to augment the experience, not burden it. Instead of a reductionist view of compromise, Cahokia takes an additive approach, where each member contributes their ideas, and a piece of everyone’s idea is present in the final decision.

Francis adds to this, explaining how she not only doesn’t have to worry about codeswitching and the consequences for not doing it, but also how everyone in the space hypes and supports her every step of the way. For her, it’s not so much like home as it is like visiting her cousins or aunts: familial, authentic, and safe.

They may not have intended to fill a void, but like a spring in the desert, life hurries to fill this new space as water rushes to soak parched earth. Before officially opening, Cahokia is nearing 30 members and ambassadors, including Madrigal and Francis as well as Elizabeth Zingg (Ho-Chunk), co-owner of the Hakirí Coffee bus. Yazzie half-jokes about aiming to book an event in the space every single day.

The demand is clearly there, from Indigenous creatives already living in downtown Phoenix and from dozens of miles away.

“There are artists who live on the rez, who want to come to the city. So the goal is to give them the place where they can feel like they’re not leaving home—or that they are leaving home, but they have somewhere to connect to when they get here,” Madrigal says.

Look ahead for any number of events taking place in the space, including Cahokia’s grand opening on Indigenous People’s Day on October 11. If you’re an Indigenous artist or entrepreneur—near or far from Phoenix—reach out, connect, and share your voice. You can pursue your dream without needing to feel homesick.