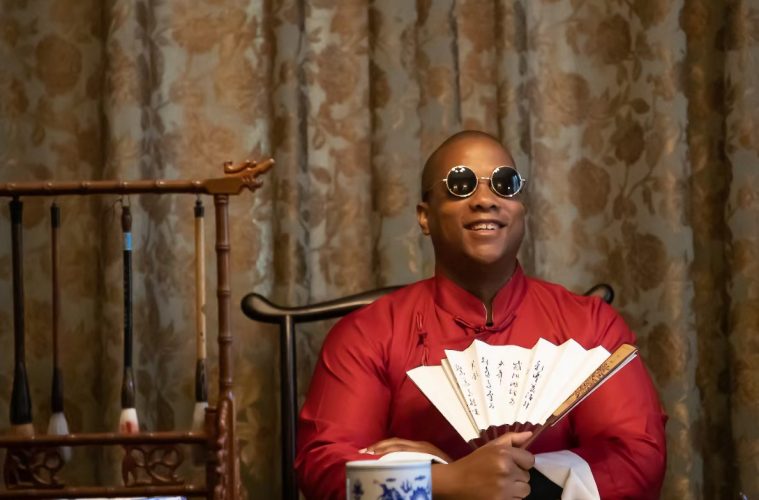 How I Became the First Black Docent at Phoenix Art Museum

After being away from Phoenix, and the US, for the greater part of the past eight years, coming back was an eye-opening experience. In many ways, this is a completely different city. I am a California native, but grew up in Arizona, having moved here with my family in 1995, welcomed by that infamous 126-degree-day summer. Despite the searing heat, my family and I grew to love AZ.

While I was away, I spent time in Asia, and had the privilege of becoming the first foreign fashion designer to participate in Tianjin Fashion Week in China. While it is by no means one of the big shows globally, it was still fantastic, and my largest showing to date, with a collection of over 70 pieces. My dear friend and jewelry designer Lana May came all the way from the US to accessorize my collection, and we had a wonderful time.

In 2020, I was one of 30 selected to take part in the AmCham Leadership Development Program and was able to meet some immensely impactful world leaders. I also did some sporadic things, including utilizing my knowledge and passion for yoga to open a studio. While there is so much more, the last of my overseas adventures I will mention is still ongoing — working remotely as the curator/creative director for the IF Museum of Art inside the K11 Art Mall/Atelier in Tianjin, one of the top 10 buildings in the world and a feat of architectural genius.

Returning stateside, I’m looking for ways to connect East and West through arts and culture. Phoenix is truly on the rise, becoming the city we all hoped it could. First arriving back in the US was special, especially when a border agent said, “welcome home.” Landing in Houston, the most diverse city in the US (where I spent three months visiting family) was refreshing to my soul after years of being away, missing the beautiful diversity the US offers.

Though the US is much different politically than when I was last here, I feel compelled to remind others that with vast amounts of diversity, there are bound to be disagreements, misunderstandings, and touchy topics. We all have to continually learn how to communicate, cohabitate, and build cohesive community.

While in Houston, I became involved with the Holocaust Museum in Houston (HMH), and felt aligned with their mission: “We envision a society that transforms ignorance into respect for human life, that remembers the Holocaust, and reaffirms an individual’s responsibility for the collective actions of society.”

Upon returning to Phoenix, I transitioned to working with the Arizona Jewish Historic Society (AZJHS) as a docent, doing curation, and occasionally helping with events. Both of these institutions are amazing, and I am honored to be a part of their missions to inform, educate, and inspire.

As a fashion designer, I was thrilled to connect with Tricee Terry-Thomas director of The Garment League and be a part of their 2022 On Central fashion show at Park Central. Prior to this, I attended an event hosted by Khamsone Sirimanivong, current president of the Arizona Costume Institute, and was invited to a preview of the fashion exhibition “Generation Paper: Fast Fashion of the 1960s,” at Phoenix Art Museum, led by curator Helen Jean.

During this private tour, I met the museum’s docent president Judy Steers, who after hearing my background, personally invited me to take part in the museum’s docent program. Having recently graduated from that training, I was pleasantly surprised to learn that I am now the first black docent at Phoenix Art Museum.

My journey to becoming a docent has been deeper than I would have imagined, and I am proud to be a part of this moment in history where, not only Phoenix, but the whole nation is realizing the lack of diversity within our museums, and doing something about it.

Past docent training programs at the Phoenix Art Museum (and most museums around the country) required a long commitment, usually more than a year, including time allotments that wouldn’t be possible for people who work full time or raise families, etc.

This year’s program was a whirlwind, compressed into bi-weekly modules, filled with a large amount of out-of-class reading and audiovisual studies, but all manageable. The program began with a semester-long introductory course addressing art history knowledge, guiding skills, and general museum etiquette and policies.

The program also includes a ton of group practice in teams. Docent advisors critique and make suggestions along the way, and we spent a lot of time practicing in the museum. What I enjoy about docents is that we are all different and each of us brings a unique perspective and narrative to the museum.

The final test was a two-image dialogue, which is meant to simulate our outreach programs to the broader community via Zoom and Google Meet. From instructors Lisa Spahr and John Engen, we were each assigned two Images from the museum’s collection and had to give a 15-minute engaging talk with a fellow docent in training, while currant docents watched and evaluated.

I will begin predominantly focused on school groups with students of all ages. One of the videos from our training that was particularly inspiring, “Teaching Critical Thinking Through Art with the National Gallery of Art Museum,” shows Julie Carmean engaging fifth grade students from Savoy Elementary in Washington DC. In the video, a class of predominantly black students observes a civil war commemorative sculpture with this museum expert. The whole interaction truly moved and inspired me. This also made me think back to my youth, and how impactful my first school visits to museums were.

Often docents represent the first encounter that our youth have with museums. These interactions can inspire and make them feel welcome or scar them and make them feel out of place. So there is great responsibility. Now my goal as a docent is to ignite the desire to visit museums, cherish art and culture, and encourage all those I meet to become lifelong learners. Becoming a docent has truly reignited my passion for museums and my hope is to ignite this in others as well.

Recently Jessica Jacobson, along with new docent president Gail Paredes-Ewen and board members, invited me to come and speak at their annual docent retreat, where I was the only male and person of color. I was truly thrilled to participate and help the program become more diverse and inclusive. When asked if I thought that the initiatives would capture a younger and more diverse group of people, I said that there is definitely a better chance, especially with the new training schedule, but also expressed that we need to continue welcoming new people, and better communicate this opportunity to others.

The Phoenix Art Museum has made great strides toward diversity in so many areas, including making the entire museum bilingual, having a more diverse staff (at some levels), and diversifying its collection. I am so thrilled to be a part of this continued effort and exciting time and am eager to see more changes to come.