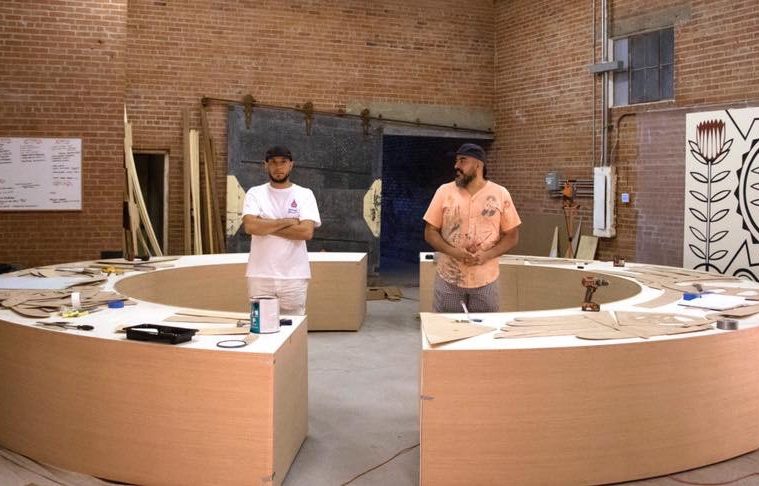 Fortoul Brothers Build a City of Paint and Sand 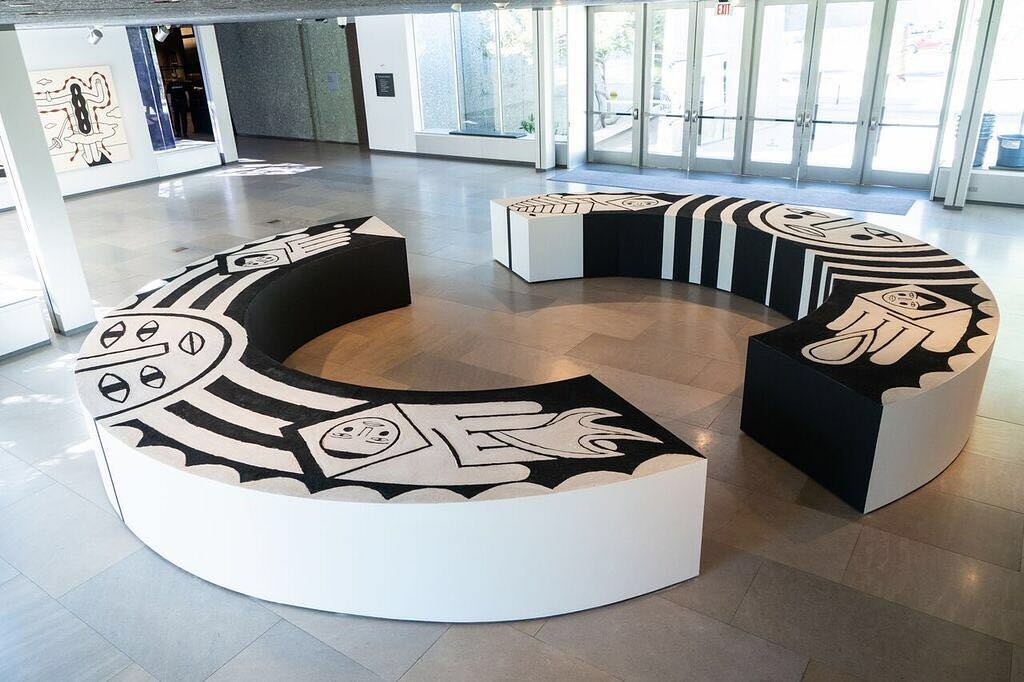 “It’s a portal,” Gabriel Fortoul explains, pointing at a large circle of tables that fill the center of the workspace he shares with his brother Isaac. Oversized stencils carved in wood cover the surfaces of the tables. They’re cut into shapes that look primeval and ancient. “People can leave everything they have going on in their lives behind as they walk in,” Gabriel says, gesturing at the circle that surrounds us. “Hopefully, they’ll walk out seeing things a little differently.”

The circle Gabriel and Isaac are constructing is meant to be a giant mandala. Encased in wood, the giant black and white sand sculpture is sure to be one of the highlights of the Fortouls’ collaboration with the Phoenix Art Museum for the upcoming “Teotihuacan: City of Water, City of Fire” exhibition.

The “Teotihuacan” exhibition promises to be an enlightening and ambitious show for PAM. More than two hundred objects from the National Museum of Anthropology in Mexico City will be on display between October 6 and January 27 in PAM’s Steele Gallery. It’s a rich treasure trove of aesthetic beauty and historical significance, as the exhibit pays tribute to one of Mesoamerica’s most enduring mysteries: the city the Mayans called “the place of reeds” and the Aztecs declared to be the birthplace of the gods.

The origin of Teotihuacan remains a mystery. Believed to have been constructed almost a thousand years before the Aztecs, the ancient city was renowned for its crafts: pottery, jewelry and obsidian objects, as well as vibrant murals. Considering the Fortoul brothers’ knack for creating eye-popping and evocative murals, it makes perfect sense that they would be brought in to add some local flavor to this touring exhibition. 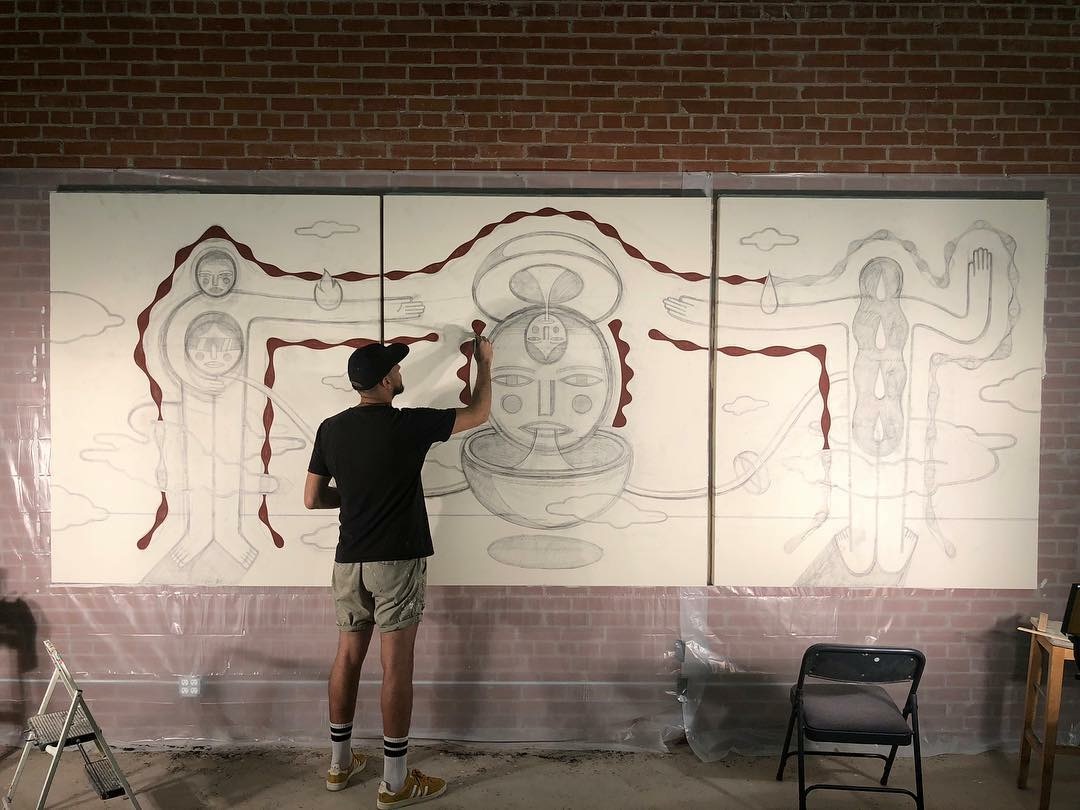 The museum staff “saw a connection in the art that we do and in the art, architecture and way of life in this ancient metropolis in Mexico,” Gabriel Fortoul says. “I believe we provide a kind of contemporary take on what was going on there. A way to bridge the gap between the past and the present.”

In addition to the large-scale sand sculpture, the Fortouls are also working on a pair of massive multi-panel pieces to accompany the exhibition – a triptych and a quadtych. Both of these larger pieces display the hallmarks of the Fortouls’ art: bold monochromatic colors, thick lines, visages and characters that resemble the figures on the inner walls of an ancient ziggurat. There’s a timelessness to the Fortouls’ work: It might look just as at home in the B.C. as it does today.

Part of what gives their art an ageless quality is the sheer scale of the work. Whether adorning the banners surrounding the stages at Lost Lake music festival or thrown up on the exterior wall of a radio station on Roosevelt Street, their figures achieve a kind of Nazca Lines grandeur.

Reflecting on why working in a large scale appeals to them, Gabriel credits it to their immersion in public art. “You have the largest of canvases available to you,” Fortoul says. “And I believe the images and their simplicity lend themselves to being large.”

Simplicity is a word that comes up often with the Fortouls. While some artists embellish and complicate their work, like a garage band dragging in a string section for their third record, the Fortouls have gone in the opposite direction. As they’ve matured and refined their craft, they’ve stripped away extraneous details and flourishes, honing a style that’s bold, simple and elemental. 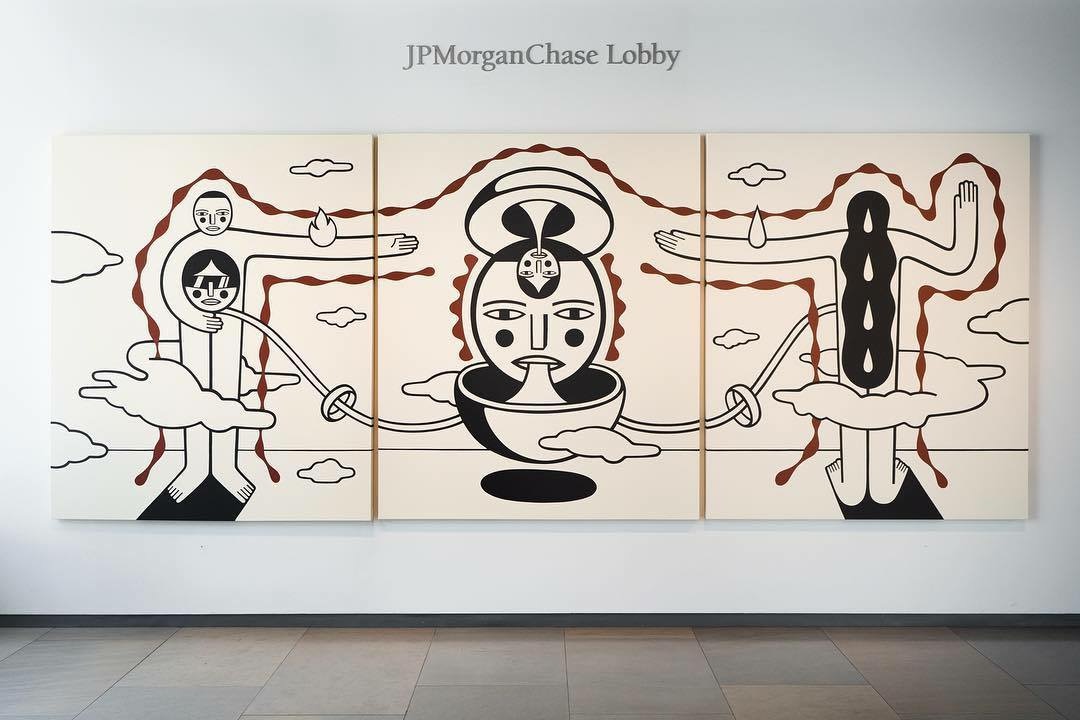 “Most of the imagery here comes from inside,” Gabriel says of the triptych and quadtych panels lining the walls of their workspace. “It’s a collection of thoughts, experiences and memories. We’re putting them together into a format – a language – that can be universally understood.”

The Fortouls are interested in creating art that makes people ask questions similar to the ones the objects on display in “Teotihuacan” are sure to pose. “You know all the physical tools that create something, but what is the magic behind all of this? What are the energies that allow us to be here?” Gabriel asks. “We want to show the unseen forces that allow everything to be alive.”