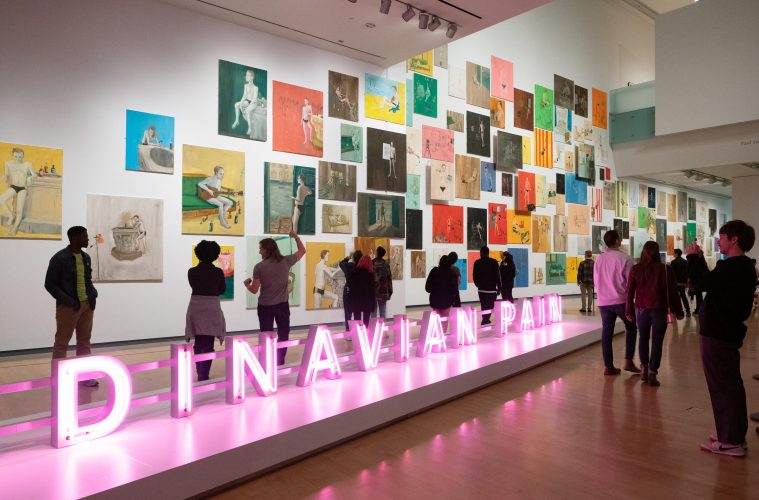 “Scandinavian Pain and Other Myths” presents three distinct works by Icelandic artist Ragnar Kjartansson. Organized by Phoenix Art Museum and curated by Gilbert Vicario, the exhibition pairs The Visitors, an expansive video installation newly added to the collection, with two other key works. Though differing from one another in terms of format, this sampling of Kjartansson’s oeuvre highlights the scope of the artist’s playful approach to performance.

Kjartansson, having grown up in the theatre – his mother an actress and his father a director and playwright – often creates works that engage in pretending, evolve through repetition, and pull from both history and popular culture. In theatre and film, the audience is well aware of fiction, and Kjartansson applies that set of relations to his projects that span across multiple mediums: video installation, durational performance, painting, and drawing. 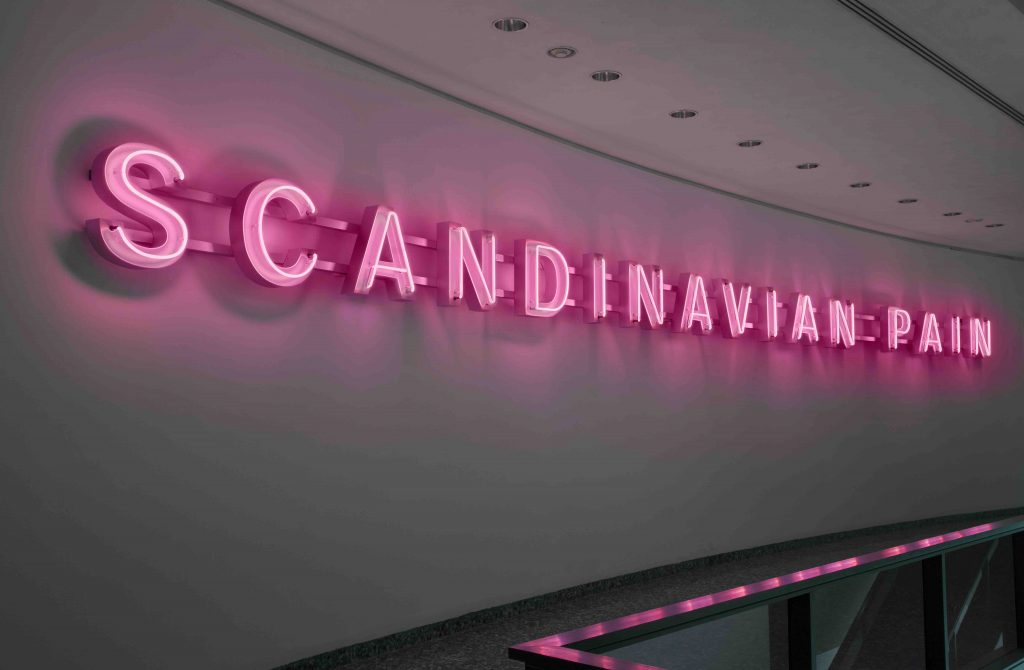 The two works presented alongside The Visitors are remnants of performative actions but are presented outside of their original context. Scandinavian Pain, from which the exhibition takes its title, is an 11-meter-long (36 ft.) neon sign that diagonally protrudes through the space. Its hot pink glow directly contradicts its bleak phrasing. The sign, originally installed outdoors atop a barn in Norway, loses a bit of its pointed irony here, but it sets the stage for its salon-style companion, The End – Venezia.

Extending along the walls from floor to ceiling, the 144 paintings that compose The Endwere produced as part of a durational performance – Kjartansson’s contribution to the 2009 Venice Biennale. For six months, the artist adopted the persona of a bohemian artist and worked out of a studio that was open to the public. His muse, fellow performance artist Páll Haukur Björnsson, appears in each painting donning a Speedo. 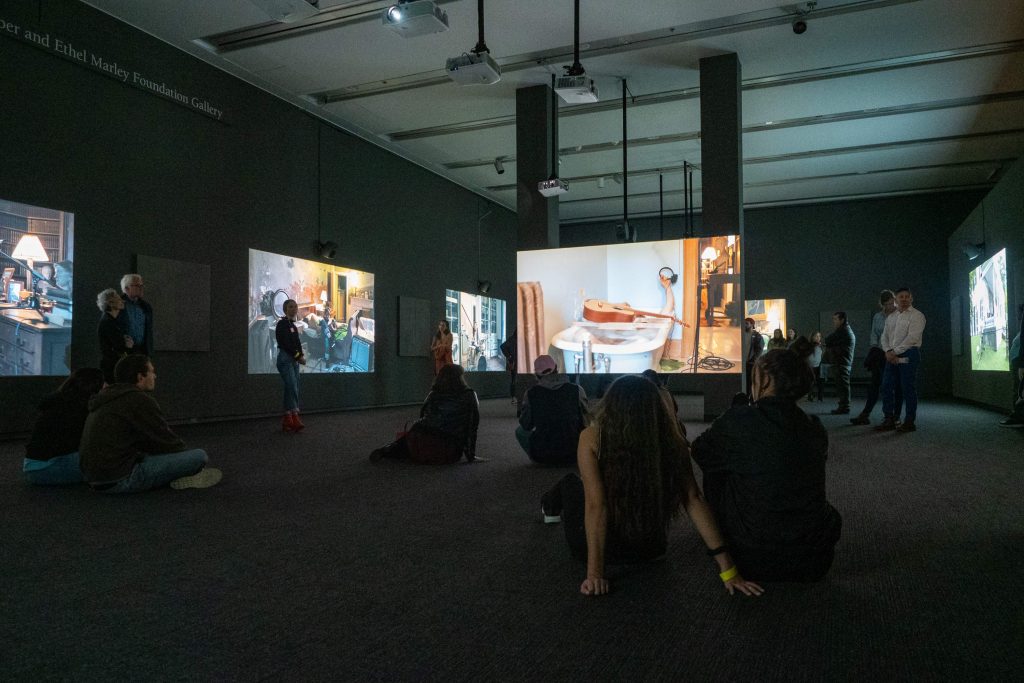 The paintings, which display a range of scenes and styles, playfully satirize the myth of the artist and muse. Equal parts endurance and method acting, the performance situates the artist as an actor and the public as an audience. Kjartansson’s deflation of the figure of the artist speaks not only to antiquated myth but to contemporary realities, as well. Through elaborate staging, Kjartansson mocks the weight we put on “truth” – in this case, we the audience are in on it.

The Visitors, perhaps Kjartansson’s best-known work, has its own space at the back of the gallery. The expansive work, a nine-channel video and audio installation that spans just over an hour, can be heard even before one walks in. Set at an estate in upstate New York, each video, carefully composed as in a painting, features a musician (including the artist) secluded in a different area of the house. Separated yet together, the figures perform a sprawling piece of music with repeating lyrical bits adapted from a poem by Ásdís Sif Gunnarsdóttir, Kjartansson’s ex-wife.

The song reverberates over the course of the hour. Performers take breaks, move from one channel to another, and collectively pour emotion into the music. With each video equipped with its own respective speaker, listening becomes a spatial exercise. As the viewer walks through the space, the work repeats itself, but it never quite sounds the same. It’s a beautiful experience, both cinematically and sonically. 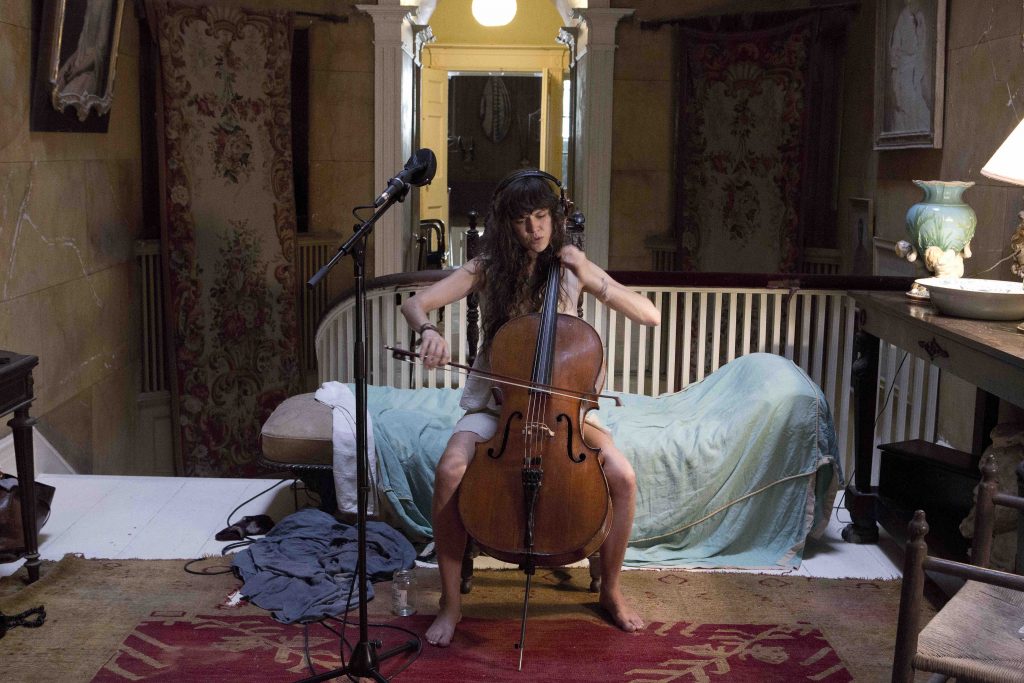 Borrowing its title from Swedish pop group ABBA’s eighth and final studio album, the work shares characteristics with its namesake. The Visitorsalbum is considered to be ABBA’s most moody and complex effort. Through the form of the pop album, the songs dwelled on the subject of divorce. The album cover, which depicts the four members in a dim room together but standing apart from one another, is echoed in Kjartansson’s installation.

Although planned and rehearsed, the overall gesture of the work has a poetic simplicity to it. It’s neatly bookended: each performer sets up on their own individual timecode, they play, moving in and out of chorus with one another, and at the very end of the song, they run off into the distance together. Kjartansson, then alone in the house, moves from one frame to another, turning each camera off.

The myths examined by Kjartansson in this exhibition and throughout the entirety of his practice  center on contradictory notions of Scandinavian identity. What is often imagined as peaceful or ideal is also grey and gloomy. Kjartansson reminds his audience that beauty, light, and humor can come from pain.