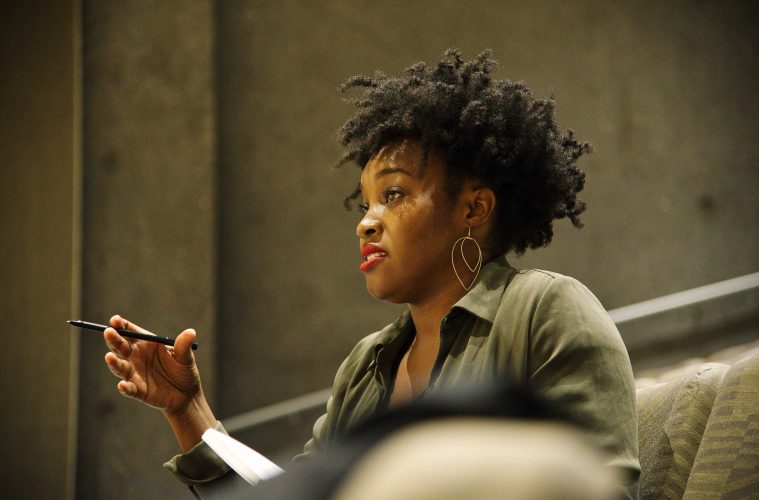 Rachel Egboro: The Whole Story We Need to Hear

The Whole Story’s mission is to bring greater depth and perspective to the human experience from the Black perspective. And for three years, its founder, Rachel Egboro, and her team of “tellers” have knocked that goal out of the park. Nearly every quarterly event – they’re held at the Phoenix Art Museum (PAM) on First Friday evenings – has sold out. The audience is diverse, appreciative, and vocal – not least so when Nikki DeLeon Martin, chief marketing and external affairs officer at PAM, welcomed the crowd to the first event by saying, “If you would look around the room, at the people to the right and left of you, these are the coolest people in Phoenix.”

But we’re getting ahead of ourselves story-wise. To find The Whole Story’s beginnings, you have to go back to 2012 – or maybe it was 2011. We don’t know for sure, because Rachel and her mentor, Dan Hull, don’t agree on the date. But they do agree, with obvious affection and respect for each other, on what happened at their first meeting. It was at a story slam at Phoenix Center for the Arts.

“A friend who knew I was interested in storytelling (I love The Mothand This American Life) went to the story slam and put my name in to tell a story,” Rachel said. She had no plans to participate and just wanted to hear other storytellers talk on the night’s theme – which, prophetically, was “Connection.” When her name was drawn, she quickly put together a story about trick-or-treating.

Dan, a former English teacher and veteran on the Phoenix storytelling scene, had his eye on the $100 prize for the audience favorite. His story was about his grandfather. “I thought I’d just walk out that night with a hundred bucks,” he said.

Let’s just pause here for a minute to acknowledge that anybody who understands how good stories work knows what happened that night. We human beings crave stories, and even if we can’t put their structure or their effects into words, we already think we know the ending of this story: Rachel killed it on stage and walked off with the hundred dollars, right?

Well, technically, that is right. Rachel had a presence on stage and a smile that lit up the room. She was funny and engaging, and the audience loved her. That hundred bucks was hers. But that’s not the end of the story.

“Some of my friends thought I was robbed that night, but they were wrong,” said Dan. “There was a definite feeling in the room when she was talking. I knew I was in trouble. She was rough around the edges, but I knew with some work, she’d be amazing.”

Dan and Rachel didn’t strike up an immediate friendship that night, or do anything to initiate the mentor/mentee (really more like family) relationship they have now. They reconnected a few months later, at a four-week storytelling class Dan was teaching. The entire class gelled, and when the four weeks were over, the group formed the Storyline Collective and did monthly shows together for about a year before all the members except Dan and Rachel moved on. The pair found new members and carried on the collective with a new crew of tellers.

Rachel became Dan’s co-host at the Yarnball, a weekly open mic night he’d been hosting. They worked together as teacher and student on various storytelling events for several years. “All that time working with Dan and Yarnball, I felt like I was supporting him and his vision. I had a role, and I was growing, but I didn’t know where it was heading,” said Rachel.

Then came the Black Lives Matter movement and, in Rachel’s words, “all that vitriol in the news. I started thinking about how I could help this conversation move along. I asked, what is my place in all of this?”

The Kehinde Wiley exhibit at the Phoenix Art Museum would be closing soon, and Rachel, used to storytelling in small spaces with intimate audiences, wanted to do a storytelling event in the gallery, with one of Wiley’s paintings, for the closing of the show. So she pitched her idea to Nikki.

“People ask me sometimes how we got the venue at the museum. It was a natural thing,” says Rachel. Before Nikki worked at the museum, she had been involved with one of the venues used by the Storyline Collective, so Rachel reached out to Nikki through Dan.

Nikki was immediately taken with the concept, says Rachel, but she had bigger ideas than an informal gallery setting. Nikki wanted to move the storytelling into Whiteman Hall, the 300-seat theater at the museum.

“I loved it,” said Rachel, “but I was freaked out. I’d never filled a room that big, and I was focused on filling it. I wanted to knock it out of the park.” So she and Dan looked for experienced storytellers who were already comfortable telling compelling stories on stage.

They were dedicated to finding a balance of stories that gave a more rounded version of the Black experience. They’d both been influenced by Chimamanda Adichie’s Ted Talk where she discussed the danger of what she calls “the single story” – the idea that hearing only one story about a group creates and reinforces stereotypes.

And so the stories for that first event were as varied in tone and subject matter as they were intimate, honest, and personal. Producer and story coach Alexus Rhone reminisced about a long-distance relationship and the “for real dumbest decision I ever made.” Comedian Anwar Newton told a suspenseful and touching story about being the victim of a carjacking where he feared that police would think he was the carjacker.

Evan Roberts, marketing manager of the Storytelling Project, talked about his childhood fascination with weapons and how his mother reacted when he used Legos to make “absolutely the most realistic gun I could.” PAM’s communications specialist Melissa Dunmore showed how Hashimoto’s disease taught her to love her curly hair. And Rachel dissected the conflict she felt when a young black man hopped her fence in hopes of evading the police, who were searching for him with helicopters.

What these stories have in common, besides the Black perspective, is a focus on what Rachel and Dan call “reducing the exposition of a story and focusing in on the narrative.”

No teller goes on stage without lots of support from Rachel and Dan. When people pitch a story, Rachel talks one-on-one with them first to help them find the story’s focus and meaning. A few weeks later, the group meets for an informal table read, and the whole group gives one another feedback. Finally, a dress rehearsal comes about two weeks before the event. Again Rachel, Dan, and the group help one another give their stories a final polish.

Asked if they ever feel like therapists in their workshop, Dan considers. “My wife is a therapist, so… But no, it’s not therapy. It can be therapeutic, though. For the teller and for the audience. When tellers have spent time understanding their stories, they communicate that meaning better.”

He should know. Dan spent 24 years teaching English to kids in the Phoenix Union School District. “In class, I gave students space to empower themselves with their own voices,” he said. “The literature was their own writing. And [supporting Rachel] is a natural extension of that.” Rachel’s and Dan’s caring is what made the first The Whole Story such a success that everybody involved knew immediately that they wanted a long-term partnership.

Nikki explains why The Whole Story is critical right here and right now. “America’s issues with race have never gone away, and over the past decade, there has been a growing awareness of what Black Americans have always known: that racism and the oppressive culture of white privilege is alive and omnipresent, and that we have to continually fight for change. Stories can play a role in that, in helping people to connect and know each other beyond categories and labels. I believe that when we understand each other as individuals, empathy grows. I have been personally moved by the stories shared in this series.”

And so this December 6, the Phoenix Art Museum will host the 11th edition of The Whole Story.

This time, Rachel has chosen a compelling line-up of tellers and their stories. Those lucky enough to get tickets will hear education consultant Drew Shaw talk about his days as a “Bad Teacher” and how he uses his own classroom experiences to train teachers to be more constructive in class. Actor and former producer Johan Beckles remembers her parents’ great love, how she found her own soul mate, and how he freed her to look for a new soul mate just before he died.

Radio host Floyd Galloway outlines his adventures in becoming “One in a Million” when he traveled from Arizona to Washington D.C. to attend the 1995 Million Man March. Rachel’s feelings about the young man in her backyard resurface when she’s called for jury duty. Brand consultant and former news reporter Kim Covington describes how she uncovered a long-buried story that she says “changed the way I looked at things, and the way I reported the news.”

If tickets are sold out at publication time, you can catch the event online. The first ten The Whole Story episodes are streaming on Soundcloud at https://soundcloud.com/thewholestoryshow/tracks. Tracks for each new edition are available about a month after the show.

And if you have a story to tell, pitch your idea to Rachel on the website (https://thewholestoryshow.com/pitch-1).