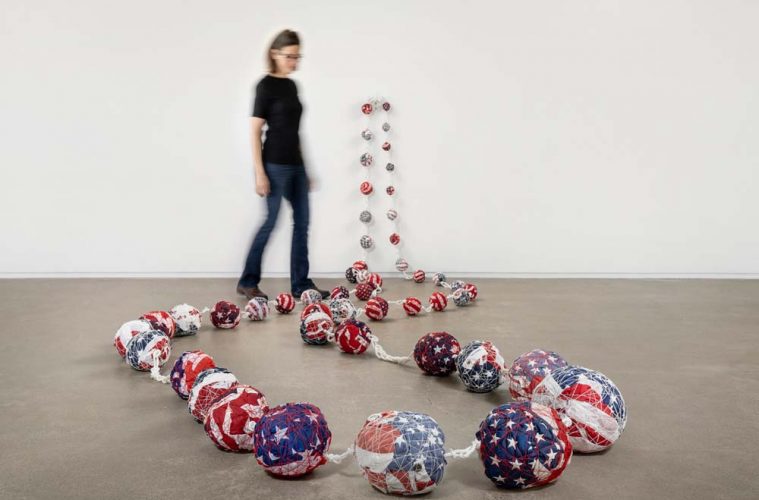 Saskia Jordá: A Prayer to be Felt and Seen

Finding ourselves at the end of the year still enveloped in a whirlwind of political, ecological, and pandemic-related turmoil, many Americans are begining to feel powerless to life’s circumstances. When confronted with tragedies tantamount to biblical disasters, people often find there is only one thing to do – and that is pray. Phoenix-based artist, Saskia Jordá, has decided to pray in the most deliberate and profound way she knows how, by mounting an impressive site-specific art installation,  Prayer for America.

The current ongoing exhibition at Walter Art Gallery in Scottsdale is composed of only a few pieces that occupy the gallery, but the entirety of the space is needed to contain the physical and emotional magnitude of the work. The titular piece, called “Prayer for America,” comprises 50 American flags bound into balls with thread, joined together by thick cords, and splayed out across the gallery floor – originating from a pair of wall-mounted hands. The beads start small enough to be hand-held and grow to the size of a volleyball, in a nod to the progressively heavy burden being faced by a nation.

The hands are made of plaster – cast from the artist’s own. Hands, in prayer, cradling this unique set of beads, resembling a rosary. With the artist’s Latin-American and Catholic upbringing, the rosary is both a symbol and an artifact of the essence of prayer. However, Jordá decided to omit some definitive elements, such as the crucifix and a predetermined number of beads, in favor of making the piece more generalized, with the hope of reaching many different kinds of people with the urgency of prayer. More specifically, many different kinds of Americans.

Now more than ever, what it entails to be an American is a hotly contested can of worms. You can ask any number of people and not get the same two answers. Jordá knows this more than most, being Venezuelan by birth, an immigrant, and a naturalized citizen of the United States. There many others with equally divergent circumstances that form the unique tapestry of this country. Yet nationally, differences in personality are often expressed in combative and irreconcilable tones, especially with respect to election results, the pandemic, environmental concerns, and issues of race.

One element that has permeated the whole of Jordá’s exhibition is the transgressive unity of the American flag. Through its intentionality, her show is a prayer for all people who lay claim to life under this banner. Her voice is one of many, some astoundingly different from her own, that cherish the freedom to use the flag in reverence, allegiance, protest, and even prayer. In her own words, becoming a citizen was a decision she “did not take lightly,” and her reverence for that decision is visible in her treatment of the flag as an artistic medium.

Jordá’s research of appropriate ways to interact with the flag was thorough and well executed. In between each bead of “Prayer for America”and the floor, there is a barely visible piece of material so that at no point does the flag touch the ground. Another piece in the exhibition titled “A Union Torn” depicts what appears to be the star-spangled portion of the flag in tatters, gripped by a plaster-cast hand (her husband’s, whom she affectionately refers to as her right-hand man). While an uninformed eye might see this piece as being disrespectful and devisive, the reality couldn’t be further from the truth. The piece is actually constructed of strips of blue fabric that were deliberately tattered and then adorned with stars after the fact to resemble that section of the flag.

In another piece titled “Mourning the Losses,” a white-on-white version of the American flag is sewn together and hung on the wall with one of the stripes being a black piece of fabric that falls onto the floor into a neat pile. The black stripe is a nod to the black armbands used to mourn losses in many different instances. One such use of the black armband was among students during Vietnam war protests. The flag in itself is completely accurate and reversible, respecting all dimensions. Whether the flag is being used to protest, pray, or revere, it can be said in the most patriotic tones that not a single flag was harmed in the making of this exhibition.

The exhibit includes two interactive pieces. One entitled “Dear Fellow American” was inspired by a letter Jordá received from former President Bill Clinton upon her gaining US citizenship in 1999, in which Clinton addressed her in a kind and sincere manner as a fellow citizen. The interactive element of the piece is a wall dedicated to cards printed with the introduction “Dear Fellow American” where visitors can write their own words and contribute to the messages to be shared. Due to the unfortunate circumstances of Covid, many people will not be able to interact with the piece in person, so Jordá is offering a customizable template through her Instagram @saskiajorda. You can create a post and tag her in it (or message her directly) and she will add a card with your statement to the gallery wall on your behalf.

The other interactive piece is titled “When There Are Nine.” Walking into the gallery, you will see a large stencil of the late Ruth Bader Ginsburg’s collar on the floor. The interactive element works as such: Jordá is offering to stencil the RBG collar on the property of anyone in the Phoenix metro area that makes a donation to either the American Civil Liberties Union (ACLU) or the ACLU of Arizona. To arrange for your participation, either message Jordá through Instagram or contact her on her website, with a screenshot of your donation. She will be running both projects through the end of the exhibit, which is inauguration day, January 20, 2021.

It’s no secret that, regardless of creed or circumstance, this year has been indiscriminately burdensome for the people of this country for a variety of reasons. If you feel comfortable with viewing this exhibition in person, reach out to the Walter Art Gallery to schedule a time to sit with an artist’s most profound prayers for you, me, and everyone in between.