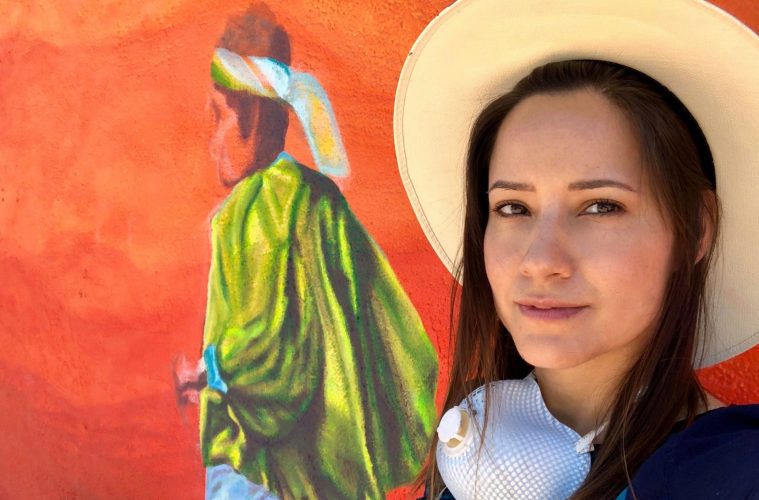 Many of you are familiar with Diana Calderon’s installation/performance works, which often include her fabricating live with a sewing machine. These performative actions transcend the notion of simple craft or labor and allow the viewer to glimpse into the artist’s private world of thought and action. Her notable “Verbo Transitivo: Transitive Verb, Versión 2” was staged at Phoenix Art Museum on First Friday of October, 2018.

Perhaps that’s why we were more than a little surprised to see photos of Calderon painting a wall mural on Grand Avenue in her Instagram feed (@dianaacalderon1). Calderon is a native of Chihuahua, Mexico, and the mural is for a new restaurant called Testal, which we feature food and culture from Northern Mexico. The restaurant’s owner also hails from the Chihuahua area. Calderon felt compelled to take this commission because it was meaningful to her and her background.

Robert Sentinery: What was your inspiration for the imagery of the mural?

Diana Calderon: The inspiration is an abstract representation of the Copper Canyons, or the Sierra Tarahumara in the state of Chihuahua, and also features a Rarámuri (Tarahumara) native runner. To share a little bit about the Rarámuri (which means light-footed), they live in caves or huts in the canyons. The Rarámuri run hundreds of miles in this rugged terrain to go to work, to trade, get supplies, etc. Running is their lifestyle. Basically, their legs are their mode of transportation. This is very inspiring to me, especially because I was born in Chihuahua. Since the mural is a commission, the design is a collaboration with the owner of Testal, Fernando Hernandez.

How did you get connected with the project?

In 2019, Fernando reached out to me about being a resident artist for the Testal Project: to paint the mural, work on design projects, and do presentations, etc. Apart from my experience in the arts, he believed that me having a close connection and access to my culture could be important to the success of the restaurant. Fernando is also a native of the state of Chihuahua. He is from the city of Parral, and when we met, he had not been back in about 24 years. Last fall, I was able to show him the ways into the canyons of Sierra Tarahumara, and since then he has been back like six times! It makes me really happy to have been able to help him reconnect with his roots. I have family, including my Dad, in the surrounding cities of the Copper Canyons. I love to take people there when I visit. The Sierra Tarahumara is breathtaking.

Tell me more about the restaurant. What kind of food will they serve and what is the concept?

Testal will feature “taste and culture of Northern Mexico,” mostly from the state of Chihuahua. It will be an all encompassing cultural experience of food (common and staple), people (including indigenous communities), landscape and the arts and crafts. It will be great to not only taste the food, but also to experience the culture.

We are familiar with your performance and installation work. How do you like painting and is that part of your background?

Generally my art work does not consist of painting as a primary element. Once in a while, I will take painting commissions such as this, if I find them meaningful. Painting can get a little boring for me unless I have people around. With murals, it’s easy to have people come visit. Don’t get me wrong, I do love drawing and mixing color – color theory. My background in painting started in high school in the late ’90s as I experimented with watercolor and acrylic. One of my watercolors won the Congressional Art Award during my senior year of high school. I find all art mediums to be interesting and I really enjoy a challenge to create and experiment.

How has the pandemic affected the mural and the restaurant’s opening, if at all?

The pandemic definitely affected the restaurant by postponing a grand opening. As for the mural, it did postpone the starting date. The painting itself has not been affected since I work outdoors and do not require helpers. I hope to complete the mural in the first week of June.

What are your thoughts about Grand Ave?

Grand Avenue seems to be full of amazing, unique people and businesses. I love Phoenix. I moved here in 2004. It can get difficult when you are an immigrant with limited support, but the people here are great and it is so wonderful to be around so so many talented creatives. I see Grand Ave to be vibrant with so much potential.

Is there a title for the painting?

The title of the painting is in Rarámuri : NAWA | RAICES | ROOTS

This project is special to me because it pushed me to more deeply explore my own culture, and gave me an opportunity to represent my colorful roots. “Roots” has been a theme for me this year. In January, CreativeMornings.com invited me to give a themed talk about roots, and mine was titled “Uproot” because I wanted to be relatable, inclusive, not just focus on my Mexican heritage. You can find the talk at  https://creativemornings.com/talks/diana-calderon/1. Upcoming at Modified Arts, I have an art exhibition that has been postponed until sometime this fall. The project is an interactive performance art and installation. The concept stemmed from a performance art piece created in 2015 titled “Invitation to Connect.” I started to develop the project further for this show and with the pandemic, I am excited that my concept may take on a new meaning.  calderonarte.com