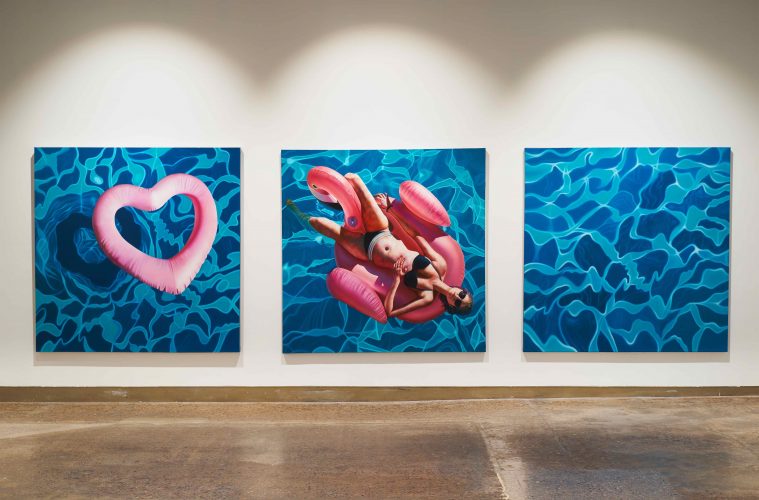 Caroline Estelle: A New Image of Americana Beyond Repressive Sublimation

With the debut of Caroline Estelle’s solo exhibition at ASU Step Gallery she joins a rather prestigious list of new wave figurative artists in the Valley including Papay Solomon, Lisa Von Hoffner, Larry Madrigal, Rigo Flores and many others. Actually, one can argue that Phoenix has become something of a hot spot for emerging figurative painters that is on par with Los Angeles, New York, and beyond. But when towering figures likes John Currin, Lisa Yuskavage and our own Colin Chilag have redefined the genre of neo-mannerism, we have to ask what makes Estelle’s work stand out at a moment when figurative art has been back in style for quite some time?

The first answer to this question has to do with the notion of style itself, and in particular, how women’s bodies are styled to become social influencers, models for magazines and cinematic sirens or superheroes. Estelle’s paintings have not only resisted reducing the female body to being just another prop in the play of commodity fetishism, but her work actively opposes this by picturing female bodies in awkward, idiosyncratic and even extreme poses that make for unconventional and inspired compositions.

Central to her unique twist on the neo-mannerist idiom is the idea that while the figures she paints can feel uncanny and disproportionate, this is done to drawn out more of the hidden character of the person being pictured. Whether sunburnt and sporting sun glasses, knocking back drinks at sunset, or merely relaxing by the pool, the undeniable quality that permeates her repertoire of muses is the distinct feeling of undeniable self-possession. And this effect goes against the predominant use of affect in mannerism, because the genre is known for trading in archetypal figures that allow us to consume a given scene or allegory absent any confrontation with the realness of specific people.

Defying this convention sets Estelle’s work distinctly apart, not just from the imagery of her contemporaries and forerunners, but even by how the works are presented and titled. Paintings like “Desert Bitch I & II” are already something more like a declaration of intent or a manifesto of sorts. And the title of the exhibition, À la Mode, suggests keeping up with the times or the fashion of the day, but still adding something special to an already established taste or dish.

But what exactly is being dished up by Estelle’s work for public consumption? We could say that her imagery emerges from the presuppositions of third wave feminism, which was often defined as Rauch feminism and depicted women owning their own version of what society had deemed to be bad-boy roles. In Estelle’s work there is undoubtedly a reclaiming of things like the baby-girl look, the beach-bum tourista, and even the reclining dilettantism implied by works like “Chloe” and “Heart Floaty.”

But one would be wrong if they thought Estelle’s pieces could be subject to this kind of easy reductionism, and that’s because she is not only engaged with mannerism and feminism, but the whole of art history. Estelle is able to paint with the graphic elegance of David Hockney, the chromatic punch of Warhol’s best silk-screens, and to bring a new sense of relevance to the kind of subject matter that Wayne Thiebaud was derided for because it was considered to be too mundane. All of this is drawn together in Estelle’s arresting aesthetic, which exhibits the same delicacy in execution that made the Photorealist Audrey Flack famous the world over.

Make no mistake, the work of Caroline Estelle is a tour de force for being absolutely contemporary, unflinching, and outright visionary. And for people who might be critical of her use of candy-colored treats, corn-dogs delights and pop-top soda cans, it’s important to recognize that these smaller works are part of a strategy of critical distantiation related to phallocentric preoccupations and ejaculate pressures absent any male presence. Afterall, these paintings are about a different kind of expression of creaminess and wetness, unrepressed. Not to mention the fact that the hands that grasp these all-too-tasty refreshments don’t seem to be planning on sharing anytime soon. If you miss the subtly of this power play, it’s because that is really what is being served up à la mode in this exhibition. Estelle is able to do something that few painters can, which is capture that added touch of jouissance that emerges alongside the play of pleasure and empowerment at the most ideal moments of lived experience.