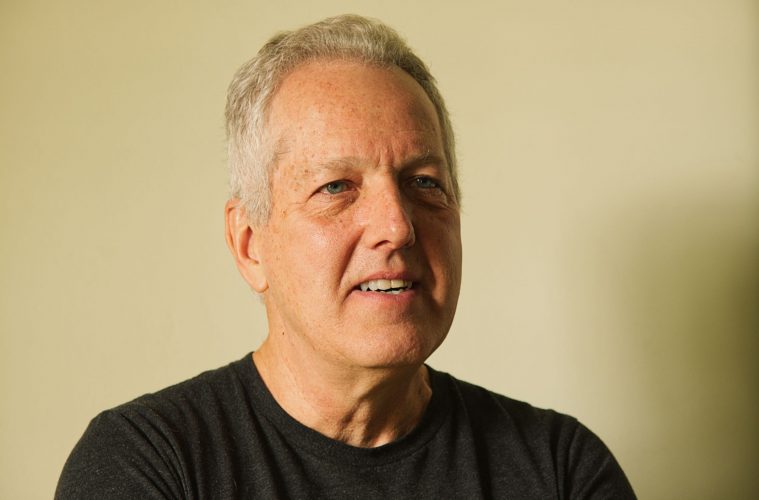 Depending on how you count, Chris Jagmin’s new show is the fourth – or maybe fifth – iteration of his career in the arts. He used his fine arts degree as a freelance graphic designer in New York, then ended up in Phoenix in the early 2000s, when work started to dry up after 9/11 and the burgeoning relationship with his life partner was growing into something big and real.

While he was keeping up with East Coast clients from Arizona, Chris’s graphic work grabbed Nat Berkus’s attention, and Chris spent a year learning how to turn his drawings into a line of dinnerware. After that, he did several years’ worth of encaustic painting that looks like outsider cartoon panels.

Most recently, Chris has become known for his text-based riffs on “pop culture, advertising, self-help gurus, secrets and gossip,” where he puts his own and society’s struggles and fears into his artworks. This body of work began during the 2016 election season, when he started to see a sharp rise in angry, divisive rhetoric. It was everywhere – from social media to the news channels.

“I’m not a political person, at least I’ve never thought of myself that way. But during that election, I was obsessed with the news. It was so anxiety-producing,” Chris said. “I was raised Catholic, and I thought of my grandmother, who was a strong believer. When she was anxious, she’d go off into the corner to say her rosary – ‘bang the beads,’ as my mother used to say. I understood that she was using the rosary to calm herself. We grew up in a violent household, and she saw the results of that violence.”

So as Chris was worrying about the state of the American union and what the political divisions might mean for society, he thought of how the rosary is an outpouring of words that can bring comfort. He would walk around the house, letting his own words flow. He’d say things to himself like: “I will sleep tonight. I am okay. Everything will be all right. We will all be just fine.”

One through-line in all his reinventions is Chris’s love of typography. So it was natural that his personal rosaries would end up in his work. He started carrying a hand-held label maker around the house as he said his rosaries.

“Typing in those words slowed me down and made me focus. I was just writing out these thoughts without punctuation. I was worried about the mean-spirited talk during the election cycle, and I took it personally,” he said. “I’m a gay man, so I’ve always been affected by the way politicians use those without power as pariahs.”

Chris realized that even as a gay man, he was privileged. But hearing so much anti-LGBTQ rhetoric made him empathize with other people who were hearing anti-immigrant, anti-religious, and other alienating political speech.

“Everyone has something in their life that shouldn’t be pointed at,” he said. “So all my pieces had something political in them. I included quotes from both sides of the debate that were mean spirited. But I never used the names of the people who said them. I don’t want to participate in the finger pointing. I just prefer that people think about the tone.”

When those pieces started showing up in exhibitions around town, Chris was thrilled to find out how universal his own anxieties were. The artworks were moving people in a way that his previous work had not. “People would come to me and talk about their own stories and how they were touched by my work,” he said. Still, he’s reluctant to take much credit for moving people.

“I don’t think art has the power to heal the audience, but it did heal me to do this work,” he said. He’d even put private interactions with his partner into his typography pieces. They often have a dark humor, as when after a fight, his stream of consciousness monologue made pie-in-the-sky promises like, “I will not look at my phone. I will not disappoint you.”

“I think we all have those talks with ourselves where we promise to be better people,” he said. But although he thinks we all have good motives, most of us will fail to some degree in our attempts at self-improvement. Few honest people would not recognize themselves in Chris’ work.

It wasn’t just an anxious public who saw his work and recognized its power. Those text-based works led to his being awarded a prestigious Contemporary Forum grant and a group exhibition at the Phoenix Art Museum in 2018.

In preparation for his newest show, Chris is looking backwards through his life. He’s thinking less about the things we say to ourselves for comfort and more about what we have the right and the duty to say to other people. He’s thinking about how to change himself and his art.

When he stopped doing encaustic painting to focus on his outsider typography work, Chris also stopped keeping the drawing journal where he’d long stored his ideas. Now he jots down his thoughts in a small, portable notebook. Those thoughts become concepts for new work, which might take the form of large installations filled with hundreds of feet of uncut label-maker tape or the hand-lettered rivers of words that reveal his joys and struggles.

Chris is also thinking about what we don’t say to other people. He regrets not thanking a pivotal figure in his life who steered him toward his career in art.

Born into a large Catholic family and growing up in South Bend, Indiana, Chris always knew he wanted to be an artist. “With seven kids, it wasn’t easy to find a place to be alone. I’d go into the dining room and hide under the table and draw. It was the only place where I could keep my pens and paper to myself,” he said.

“There weren’t any art schools in South Bend, but I would always take art classes. Mr. Seeley changed my life,” he said. “He was a printmaker, and he saw something in me. He encouraged me in so many ways. He’d have me teach the class some new technique, and that gave me this boost that was amazing. If I was having a tough time, he would write me passes to come into his class and draw. I would skip class to go into Mr. Seeley’s room, and he never batted an eye.”

Chris says Mr. Seeley’s gentle encouragement and printmaking skills led to his getting a degree in fine arts printmaking and graphic design from Indiana University. “I often thought about Mr. Seeley, but I never reached out to thank him. Then I heard that he passed away, so now I try to make sure that people know their thoughtfulness is appreciated.”

Telling people what they mean to you is only a part of what Chris is thinking about in preparation for his new show, opening March 21 at Modified Arts. He’s sharing the show – What Can I Say?– with Ann Morton and Safwat Saleem, two fellow artists who are also thinking about what people can and should be saying to each other these days.

“I’m fully aware that I’m a middle-aged, white man. I get that I am being defined as that because that’s what people see first,” Chris says. “So Ann and Safwat and I have been talking about how we’re perceived and maybe marginalized.

“Like with Ann, people might see her as just a housewife, but she’s had a career in graphic design, and she retired from that to get an MFA. Now she does a lot of work that’s very political, but people probably don’t guess that when they look at her. And Safwat has done TED Talks about what it’s like when people hear him speak with a Middle Eastern accent and how that puts him in a specific category.”

Chris says the three of them have similar sensibilities and aesthetics but different ways of examining their personal experiences. They want to engage people in the process of thinking about how to speak to other people and what to say. So they’re planning activities beyond the usual gallery receptions and viewings.

“We’re doing a silent walk in partnership with Angela Ellsworth’s The Museum of Walking,” he said. “We want people to think about a time when they regretted saying something or didn’t say something they should have said.” After the gallery closes at 5:30 p.m. on March 21, attendees will take a guided walk around the streets near Modified Arts. Then, as a callback to a public art work called “Your Secret Is Safe with Me” that Chris created for the 2016 Canal Convergence, people can write a few words about what they’ve decided to do about their regrets and put their intentions in a box for safekeeping.

To close the show on April 11, the artists will hold a writing workshop in partnership with Flypaper, the group that puts on the Barflies storytelling events and supports Phoenix’s literary scene. You can register for the event at flypaper.org/events.

Chris says he’s both nervous and excited about this change of direction in his art. His new work is more serious than people might be used to. But he says he feels more energetic and excited about it, like he did when he was fresh out of art school.

“Change is so freaking exciting,” Chris says. “It’s hard to change when you’re my age. I really admire [people who can change]. I can’t do anything else with this energy. I feel compelled to make this work.”