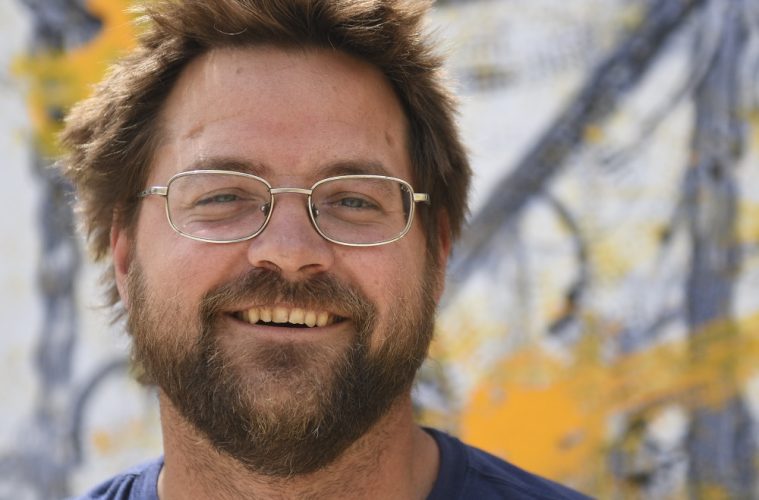 The Visual Jazz of Bobby Zokaites 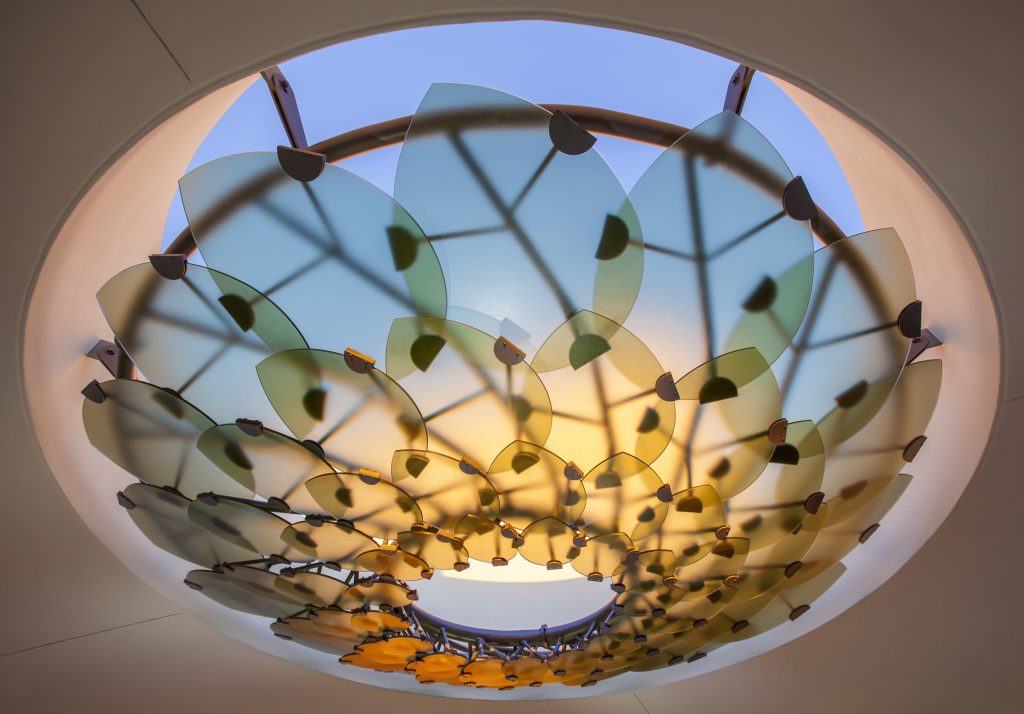 Whether suspended twenty feet above his latest sculpture or deep underground with only a flickering headlamp for light, Bobby Zokaites believes people should be self-sufficient, but art should be a community affair. From his early days hacking Roomba vacuums in his dorm room, to his years living and working at a remote sculpture park, to his ceaseless construction of larger-than-life installations today, Zokaites creates interactive art that inspires whimsy and wonder. Though his toothy smile, self-deprecating humor, and laugh that sounds like a cartoon machine gun may fool you, beneath all that lie an ambitious, driven artist blurring the lines between gallery and playground.

The two dozen or so upturned half-dome platforms of “Shifting Sand Lands,” topped with vibrant rainbow colors, really come to life when children and adults climb aboard and start hopping, the only objective being not to touch the ground. This piece was initially commissioned for the Scottsdale Arts Festival in 2015. It was Zokaites’ first professional gig following his graduation from ASU with a Master of Arts degree. 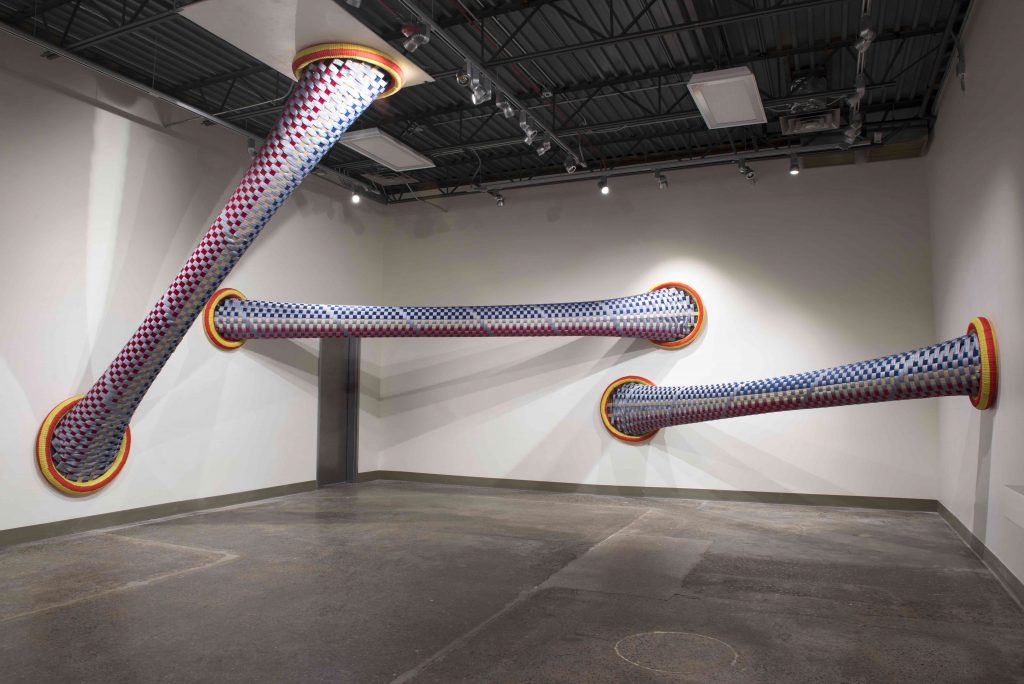 Though he has made many more vast, interactive projects since, including designing three stops for the new Tempe Streetcar, that first post-graduation piece exemplifies the way Zokaites transforms observers into participants and challenges the golden rule of galleries and museums: no touching. The apparent simplicity of the work belies the complexity of its construction and deeper critique.

The precarious platforms are fun and colorful but could also be read as reflective of the uncertainty faced by a growing portion of the population. The exhibit is named after a particularly vexing stage from a classic Super Mario Bros. videogame, where the earth literally falls out from under you. “Tying it into videogames has really given a way for people to talk about it in the contemporary world,” Zokaites explained.

Zokaites was standing on a board, taking a smoke break from working on his thesis, when he first conceived of the idea for “Shifting Sand Lands.” When he was later approached about creating something interactive for the festival, he happened to be constructing the metal spheres he used for making gigantic Weebles. Being unfamiliar with the undulating vintage toy, I made the mistake of asking him what they were. Zokaites was quick with a sarcastic rendition of the Hasbro product’s catchphrase: “Weebles wobble but they don’t fall down.” 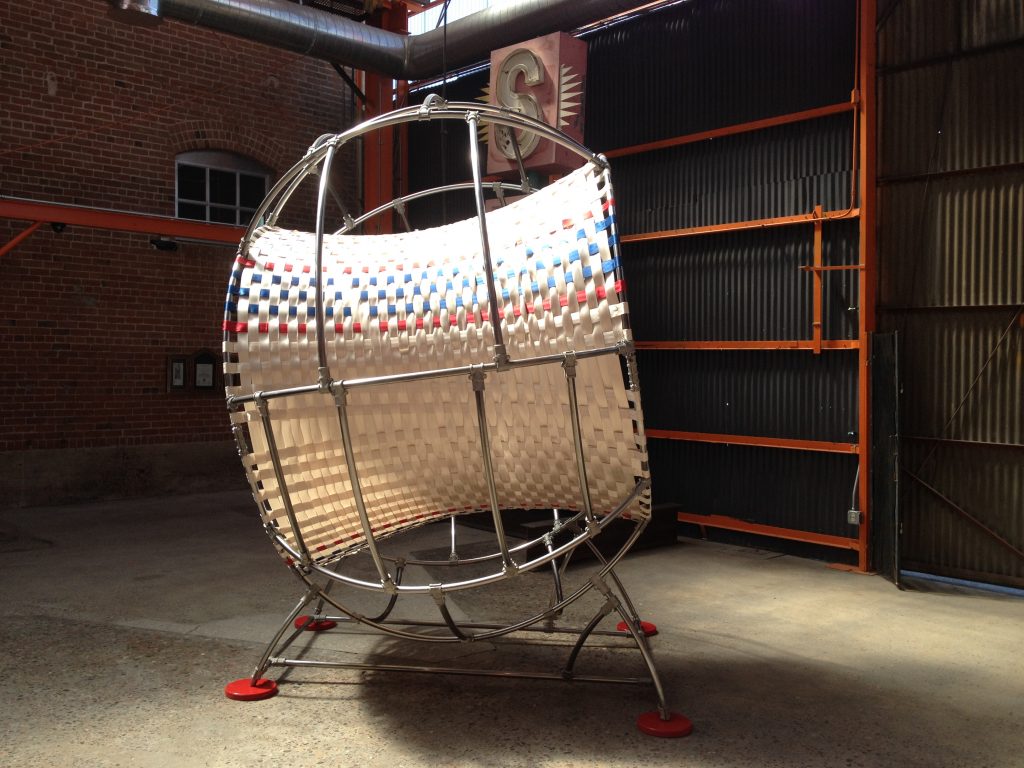 Even though he had already accepted a job in Texas, he quit, leaping at the new opportunity as quickly as a Weeble righting itself. Knowing he didn’t have all the tools to make the project, he visited half a dozen studios across the country, building the components where and when he could. This daring decision exemplifies a restless creative refusing to settle or conform, a lesson Zokaites first learned at a young age.

When Bobby was in fourth grade, the question of how many caves are in Virginia came up in class. Unsatisfied with the textbook answer of three, he asked his mother, who said it was more like three thousand. Back in the early ’70s, she had enrolled in Virginia Tech’s forestry program, one of only two admitting women at the time. Zokaites’ parents got into exploring, or spelunking, the limestone hollows of the nearby Blue Ridge Mountains. They joined a caving club, mapped caves, and even became certified EMTs so they could perform underground rescue operations.

While most kids were learning to tie their shoelaces, Zokaites was twisting Swiss Seat knots and assembling carbide headlamps blindfolded. Though literally descending into dark caverns is not a traditional path into the arts, those skills and experiences proved helpful for the future sculptor. “Rebuilding the carbide lamp helped with a basic understanding of mechanics,” Zokaites explained with a shrug. “There’s a 3D visualization component to that exercise. You have to imagine in your mind what this thing looks like. It definitely encouraged a lot of the same thought processes and also a lot of the same actions. With vertical caving, you have to rig ropes, so when you get into crane work, it’s a very similar skill set.” 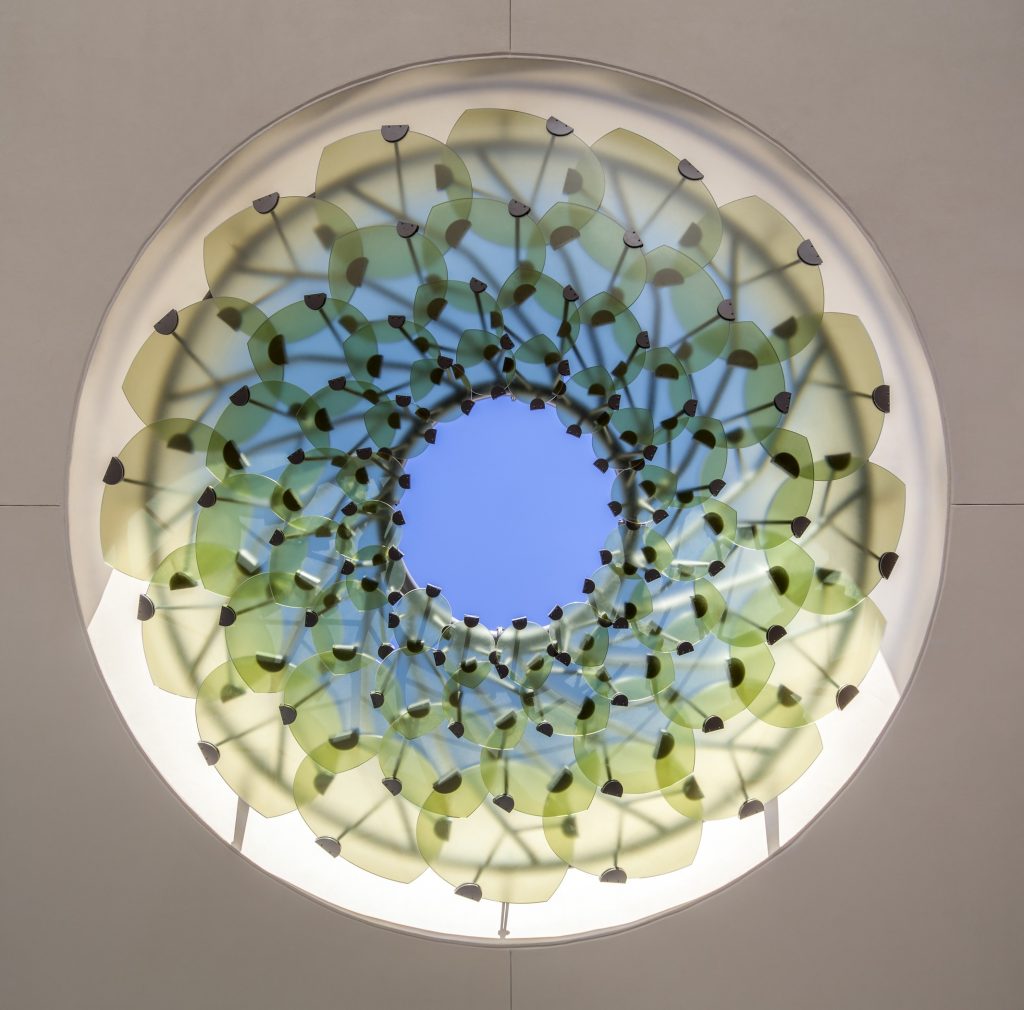 Despite growing up with an engineer for a father and living in the shadow of Virginia Tech, Zokaites was bored by technical classes. His high school art teacher noticed him ditching them to hang out in the art room. With her encouragement, he enrolled in Alfred University after learning of its strong ceramics program during a field trip. The small school in upstate New York provided Zokaites’ early foundation in art. Student works were graded on how “memorable” they were, and he proved adept at creating ones that were hard to forget.

Zokaites hacked a Roomba vacuum and repurposed it to make large-scale paintings. Ever the contrarian, he used an algorithm to subvert the ideal of self-expression by asking, “If a computer can do it, why do we need a human?” His robot’s art received significant press coverage and was shown at galleries in New Jersey and Illinois. “The original had a pretty grody homemade pen through the top of it,” Zokaites said. “They made better paintings back then because the reservoir was so poorly made. It was all hacked together, so you got more of an expressionistic mark.”

In what Zokaites describes as a lucky break, a professor told him to sort the mail one day, and he found a poster promoting residencies at Franconia Sculpture Park. He applied and was accepted, moving to the 43-acre outdoor sculpture park in rural Minnesota during the summer between his junior and senior years at college. “When you’re learning to work at that scale, you make a lot of mistakes,” Zokaites said. “All of a sudden, I was building 16-foot-tall sculptures, 26 feet in diameter, that could fold up and be stored in the nooks and crannies of an art school. My BFA exhibition was this whole courtyard installation. Things were bolted to the building.”

Graduating during the recession in ’08, Zokaites traveled, had some art shows, and worked as a landscaper until he heard of a full-time position at Franconia. He landed it and for three years worked with hundreds of artists while learning how to use and maintain the various tools and machines. “The workload was like being a roofer,” Zokaites said. “Most artists had one teacher or two teachers that they really got along with. I had a hundred, all versed in different materials.”Though in the summers he was constantly busy helping others and had no time for his own work, in the winters he had time, tools, space, and sub-zero weather to keep him from distraction.

After three years, Zokaites was ready for a change. Drawn by the faculty and proximity to public art opportunities, he entered ASU’s graduate sculpture program. At Franconia, he’d slept a hundred feet from his workshop for three years. Moving from Minnesota to Arizona in August proved challenging, as did biking the mile to school through the heat. He woke up early, biked in, and didn’t leave until after dark.

“The first semester, I made twenty sculptures out of twenty materials at twenty different scales,” Zokaites recalls. “I got a lot of, ‘What’s your rush? We wish you talked to us while these were in process.’” Despite the remonstrances from professors to do otherwise, he continued working on numerous projects, such as “Inter-Urban,” a “mobile architecture” made of an old truck, railroad jib crane, and wooden grain elevator. Another interesting collaboration, titled “The Machine the Sneetches Built,” saw Zokaites paired with composer John Chittum, together creating a twenty-foot mechanized drum inspired by Dr. Seuss. 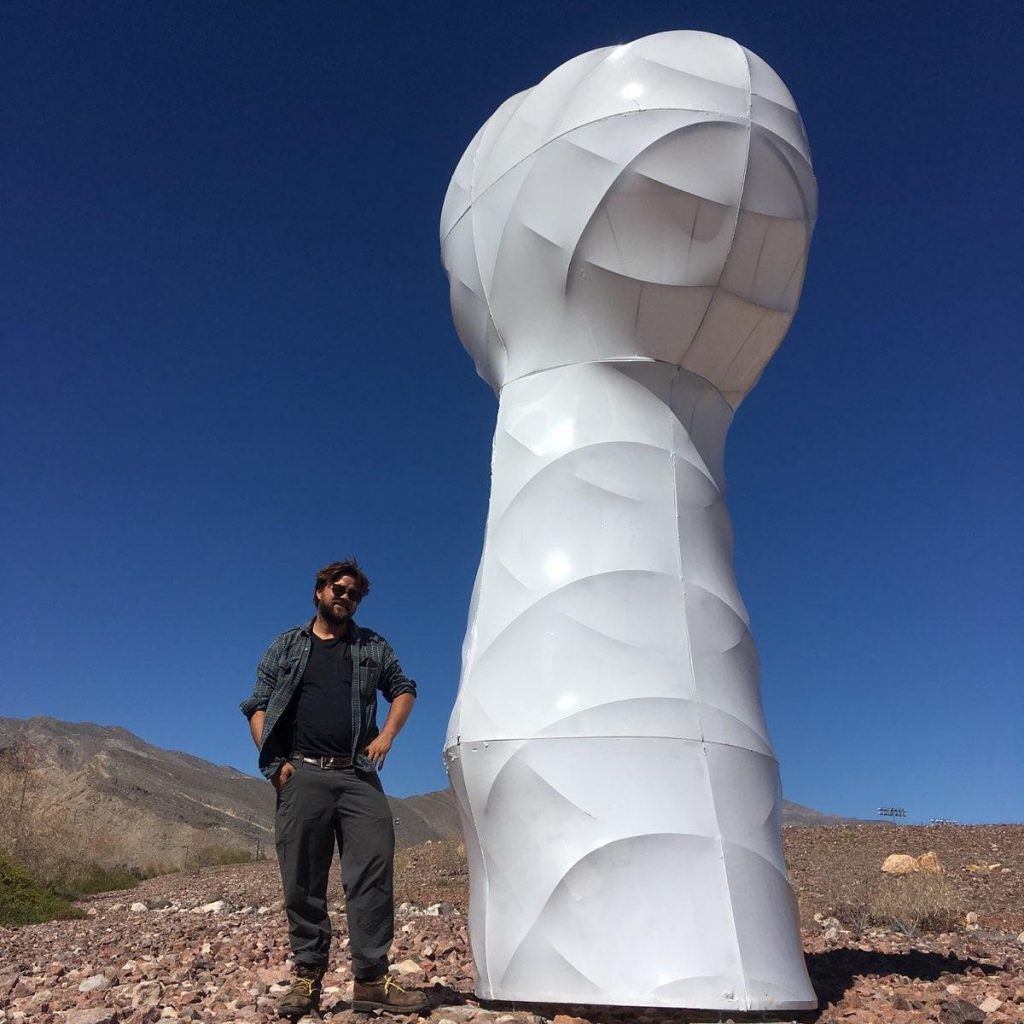 Having a firm foundation from his undergrad work and practical experience from Franconia, Zokaites listened to his professors, reduced the number of collaborations, learned to secure funding, and developed an aesthetic around a particular material. After he bought a large amount of seatbelt fabric for a killer deal, he created sculptures using scaffoldings fitted with forms of woven seatbelt straps. This led to the checker-patterned gigantic tubular shapes of his graduate thesis show, “Tom Sawyer Wears a Business Suit,” and later works such as the whimsical “Boone’s Flugelhorn.”

Though Zokaites continues to create temporary installations, such as a recently completed sixteen-foot-tall artificial hoodoo made of a steel armature with a tight plastic skin for Las Vegas, he is beginning to have opportunities to create more enduring works as well. He recently collaborated with faculty and students of Phoenix Country Day School on the design of “The Oculus,” which is inspired by agave shapes and constructed from concentric rings of teardrop-shaped glass panes.

Zokaites is one of four artists creating permanent artwork for Tempe Streetcar stops. He has designed three, including one using historic recycled streetlights fitted with art inspired by desert plants, another with artwork referencing Apache Boulevard’s once neon-heavy skyline, and one featuring humongous rediscovered air handlers, relics of Tempe’s industrial past.

“In my early work – later in life they’re going to look at this Valley Metro project as early work – there is a lot of angst, ambition, and excitement from actually being able to execute a large-scale sculpture,” Zokaites mused. “My reason for pursuing art is different than people who view it strictly for aesthetics. But also, I will say a large part of it for me is about getting the community involved in the production.” 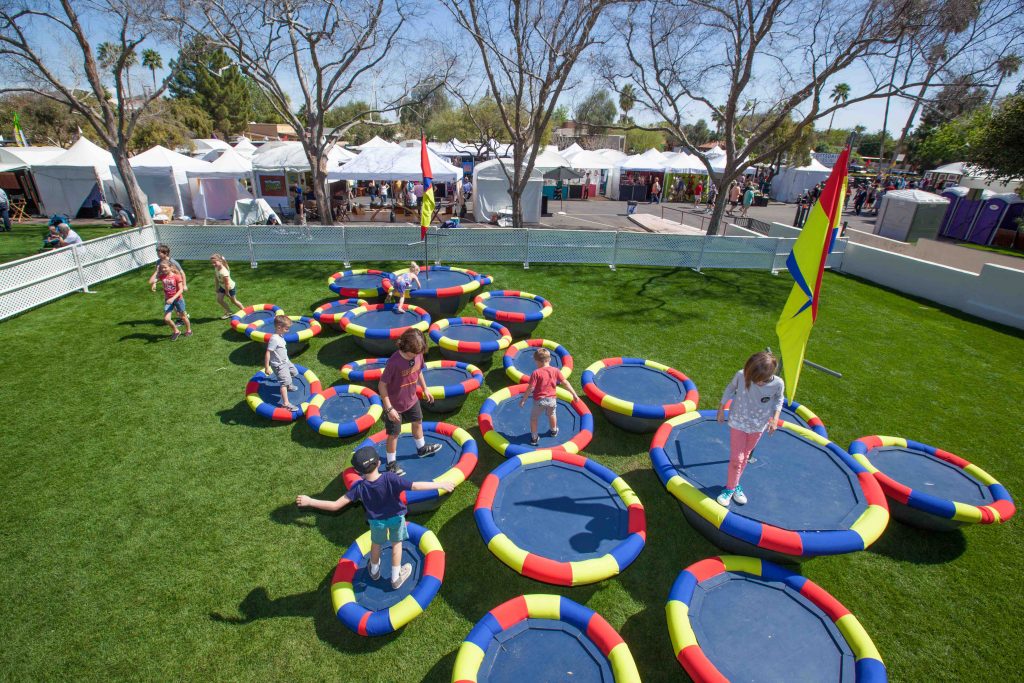