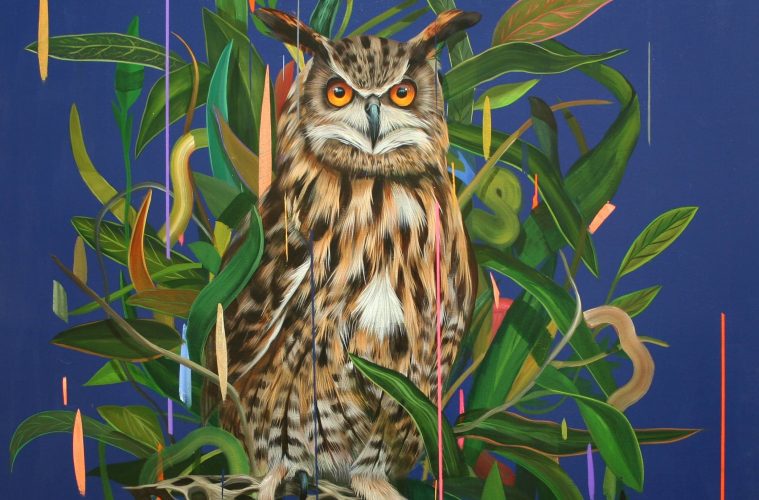 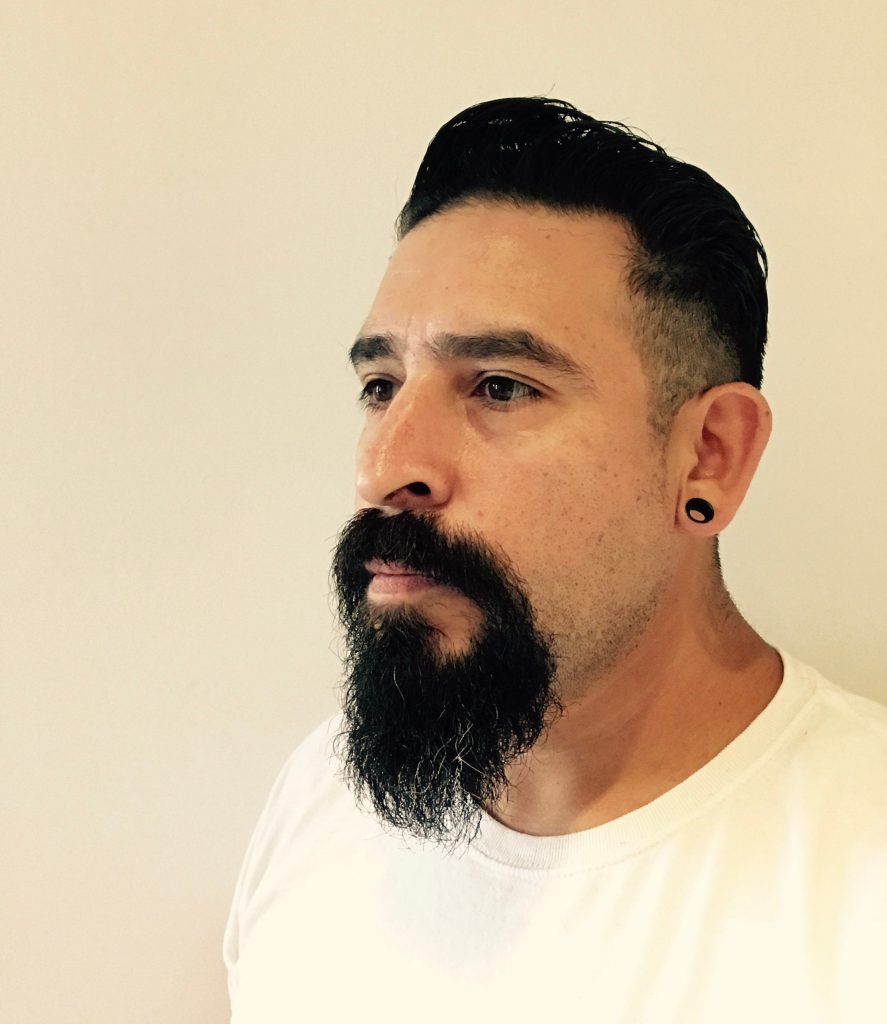 Phoenix artist and Arizona native Frank Gonzales believes in the power of mythology. Specifically, he is drawn to Joseph Campbell’s idea of the hero’s journey as it pertains to his life, artwork and purpose. In Campbell’s narrative arc, the hero leaves his home and journeys through the world only to return with the lessons and wisdom gained in order to help the community that knows him. There’s a certain power to homecoming—returning—the process of always returning, always going out, that can propel people to do art and make meaning: Gonzales is one of those people.

Gonzales was born in Mesa at what was Desert Samaritan and grew up on the Tempe/Mesa border. He was his parents’ only child in a Chicano family and struggled to learn Spanish. His friends and family teased him, and this sense of separation may have sown the initial seeds of an artist. An artist is often cultivated by isolation or feelings of isolation—especially from one’s own family. 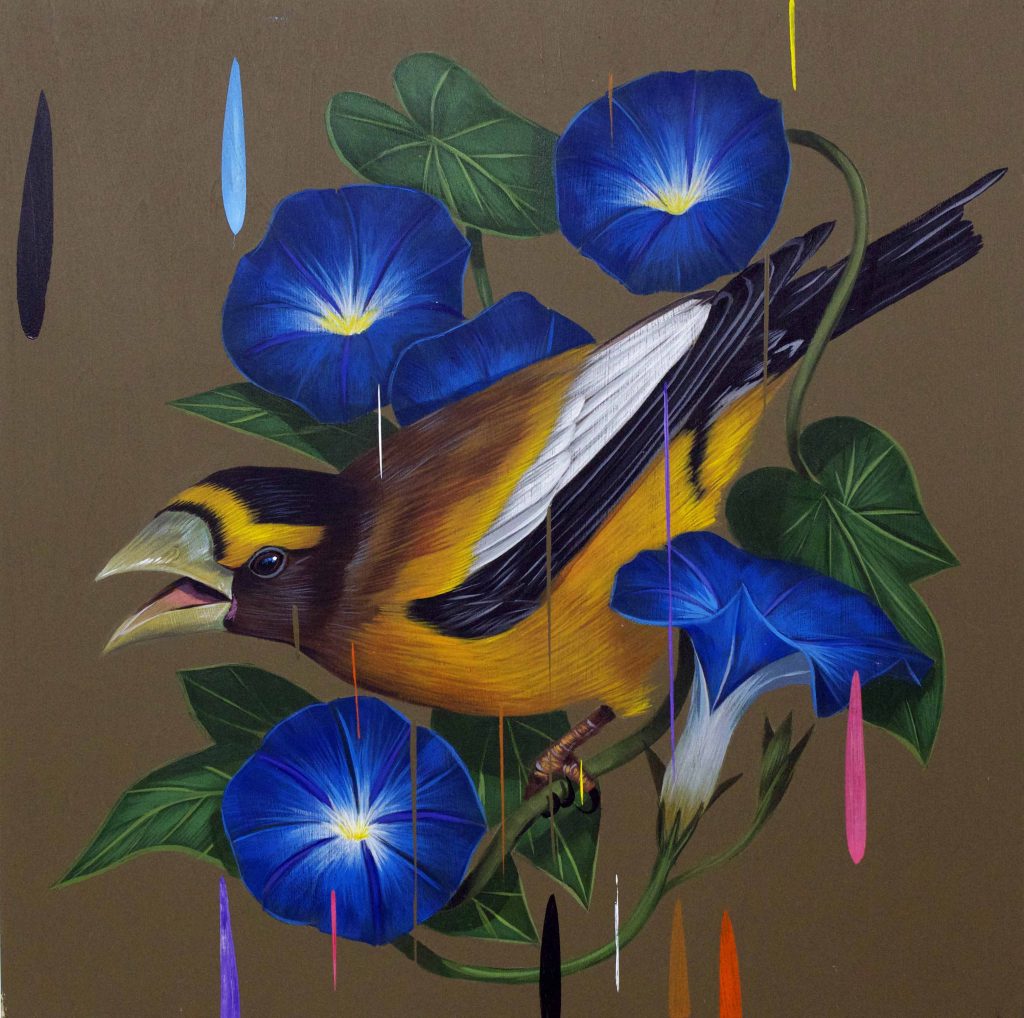 “When I was a kid my mom took me to see La Bamba,” Gonzales said. “It was funny because I felt like I related to this dude. His Spanish was terrible. I would get shit because I couldn’t speak the language very well. You kinda feel in a weird place. It helped to see that he still made it even though his Spanish sucked.” Nevertheless, Gonzales had a typical, simple childhood in Arizona. He played sports and made friends with a lot of kids. He was never fully immersed in one social circle or another and kind of made friends with everyone.

In high school—before he started listening to rap—he would listen to a lot of reggae, and people would make fun of him for wearing Bob Marley shirts as a Chicano kid. In many ways, Gonzales was stepping out, stepping in to his mythology of adventure as a kid. He was calling into question what it meant to be Chicano in Arizona. He was defying his space.

Gonzales would draw for kids in high school. A lot of kids would ask him to draw their names on brick walls or draw cartoons for them. He was playing sports in high school, but at a certain point he didn’t feel like doing it anymore. “During my senior year I walked into my football coach’s office and told him I didn’t want to play anymore. I wanted to make art. It was the best decision I made in my life.” Gonzales didn’t have great grades by any means, so going to college wasn’t necessarily on his radar, but he knew he wanted to make art. 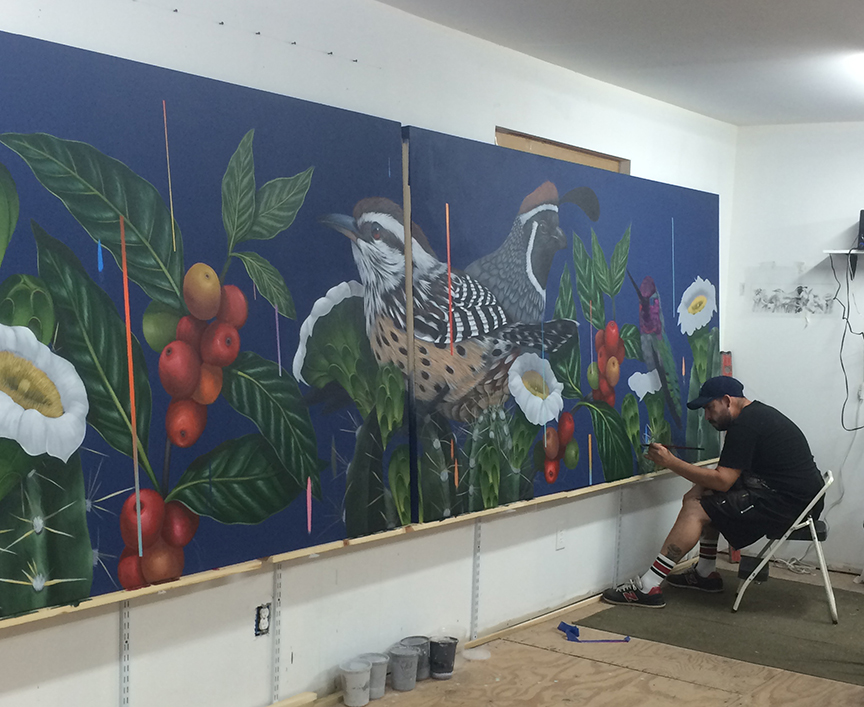 While in high school, Gonzales had developed a love for hip hop. It was a world where it didn’t matter where you came from. It didn’t matter what you looked like. All that mattered was that you were fresh and if you could rock it. Hip hop provided Gonzales with community. He was a part of the Tempe Bronx Krew, which was a hip hop/graffiti art collective in the ’90s. The collective would perform on Mill Avenue on Fridays and Saturdays. They would have emcee battles, b-boy battles and graffiti writing. He was definitely someone who could create some good graffiti writing.

Eventually Gonzales started attending Mesa Community College and enrolled in art classes. It was there that he learned about form and figurative art. He also took critical reading classes and learned about Greek mythology, which was inspiring for him. His professor Jim Garrison was especially influential and suggested that Gonzales seek out an art degree.

Up to that point, art school hadn’t seemed like a possibility to Gonzales or even something that he wanted to do necessarily. But Garrison recognized a talent in Gonzales and wanted him to develop that. Gonzales got a scholarship to Laguna College of Art + Design. His family was initially against it. They wanted him to go to Arizona State University, but he was intent on going to Laguna and developing his skills as an artist. Against his family’s wishes, he began his hero’s journey away from the home. 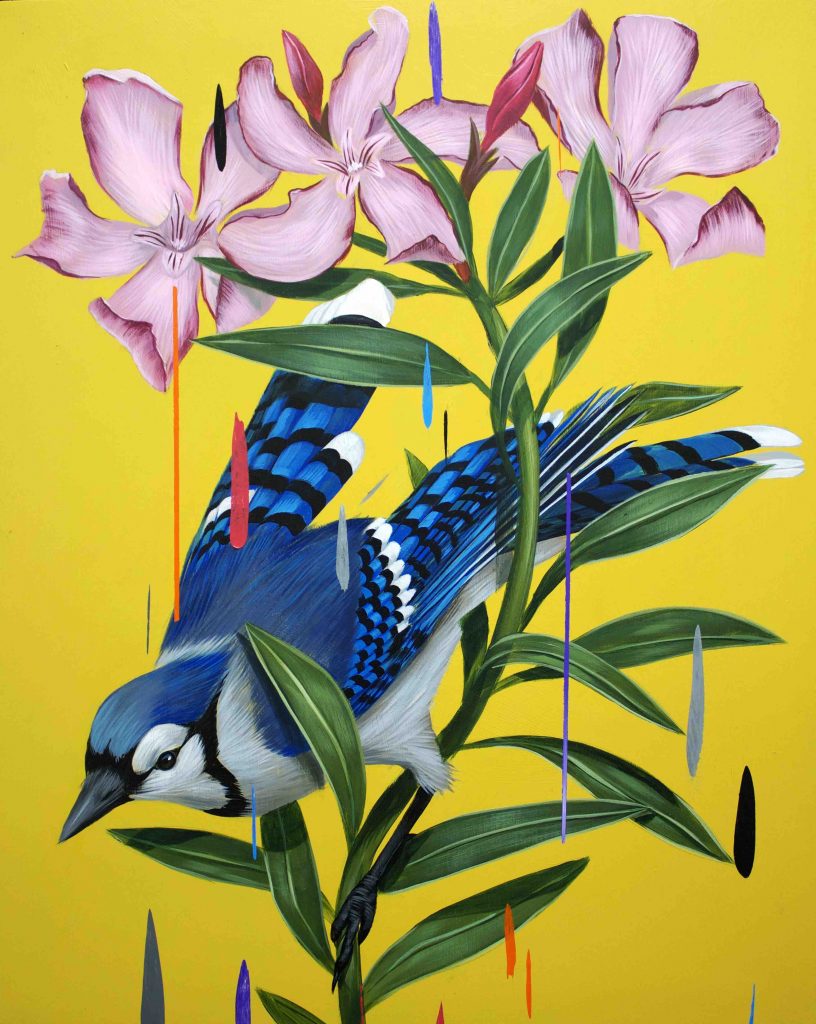 At the school, Gonzales further improved upon his figurative foundation. “They say once you learn all the rules, you have to learn how to break them. I still have a love for figurative art. I think personally, I didn’t have much to say with it,” Gonzales said. While at Laguna, he met fellow artist and student Richard Salcido. Gonzales and Salcido would have competitions with each other. They would work with several different subjects and try and stretch the boundaries of what they could paint.

One time, Salcido challenged Gonzales to paint birds. “The birds started stylistic,” Gonzales said. “It was more about how I was handling the paint. As time went on, they became more descriptive. I have always liked things that were of the curious nature. Eventually I started having a great time with it. I started getting more books on birds. I never thought that my work would become tight. Eventually it comes down to trying to find your own voice. That’s the idea of an artist, trying to find your own language.” 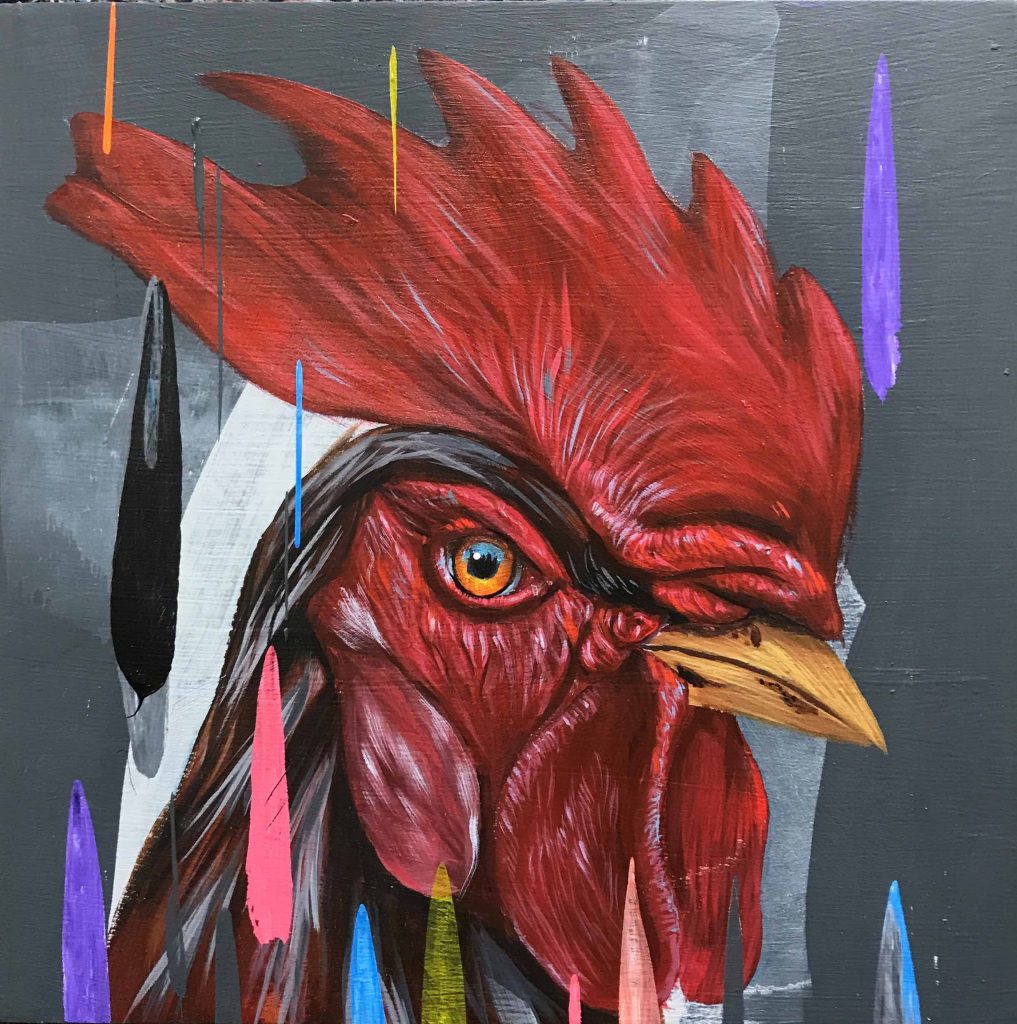 So, Gonzales somehow became the bird artist. He jokes that people have teased him about it. But birds were something that inspired him. Maybe it’s because birds inhabit the Joseph Campbell story. They are constantly leaving and returning. They are constantly on a homecoming tour.

During Gonzales’ senior year, he got a job working at the Finger Hut as the gallery assistant. While working there, some of the staff let him hang his art on the wall anonymously. They would create a pseudo artist bio and come up with names for his pieces. Eventually some of his stuff sold, and he would anonymously hang the pieces in the buyers’ homes. In some ways, this helped give Gonzales a lot of confidence to step out more as an artist. Right before graduating, Gonzales was able to show at a gallery. 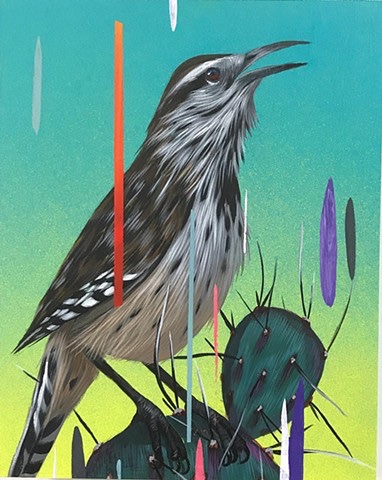 After graduating from college, Gonzales moved to New York with his girlfriend. Living in New York was sort of a dream come true for such an ardent hip-hop fan and artist in general. While living there, he got married. He was producing art full time, and life was good for the most part. Unfortunately, things didn’t stay in blissful stasis. The relationship between him and his partner devolved, and he ended up having to get a divorce.

“Getting divorced really played a huge role in my life,” said Gonzales. “I started to just paint. It was this whole self-revolution, an unfortunate event that sparked an evolution in my work. Tragedy often breeds some type of creativity. It was great—you chop a tree down and all these sprouts come out. I got to experience life alone living in New York. It was intimidating but it was still exciting,” Gonzales said.

Fortunately for Gonzales, he was able to reconnect with an old flame from junior high. After a long distance courtship, they eventually decided to try out a relationship again, and he moved back to Arizona, where his story began. 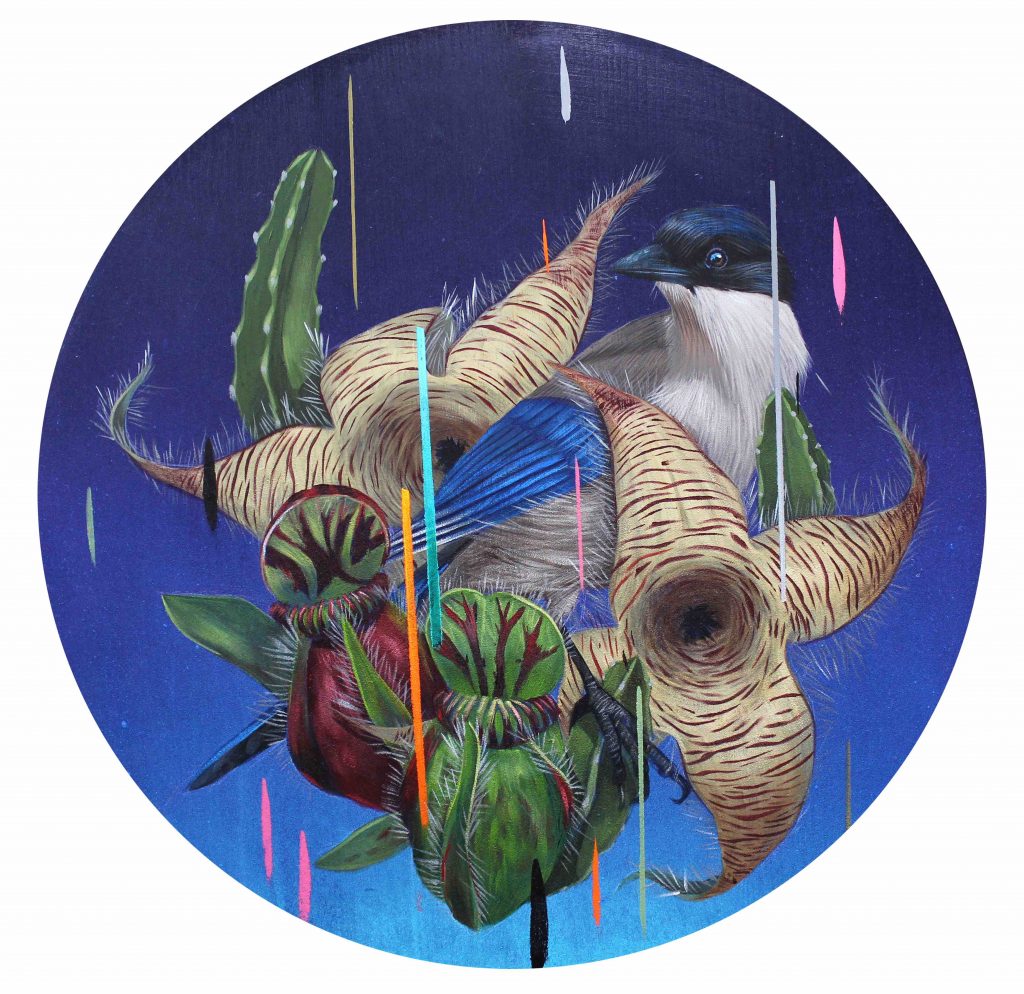 After spending 12 years away from Arizona, Gonzales returned to his origins. “Moving back to Arizona, I fell in love with the desert again. I collect a lot of cactuses. I love to see them in people’s yards. I’ll use them for inspiration to start a drawing on panel with those elements. I’ll look for a reference and find a bird that speaks to me for whatever reason and will try to fit it into the composition,” said Gonzales.

“My work takes different elements from nature and puts them together to see what happens,” Gonzales said. “It’s a lot of play. I like to play with elements that don’t necessarily thrive together in real life. It’s like an artificial realism. There’s this element of design and a mixture of realism, along with graphic elements as well. It’s a contemporary approach to an age-old subject matter. I’m just trying to present it in a new way. If you strip it down, these could be scientific illustrations, but I try to make it believable on the surface.” 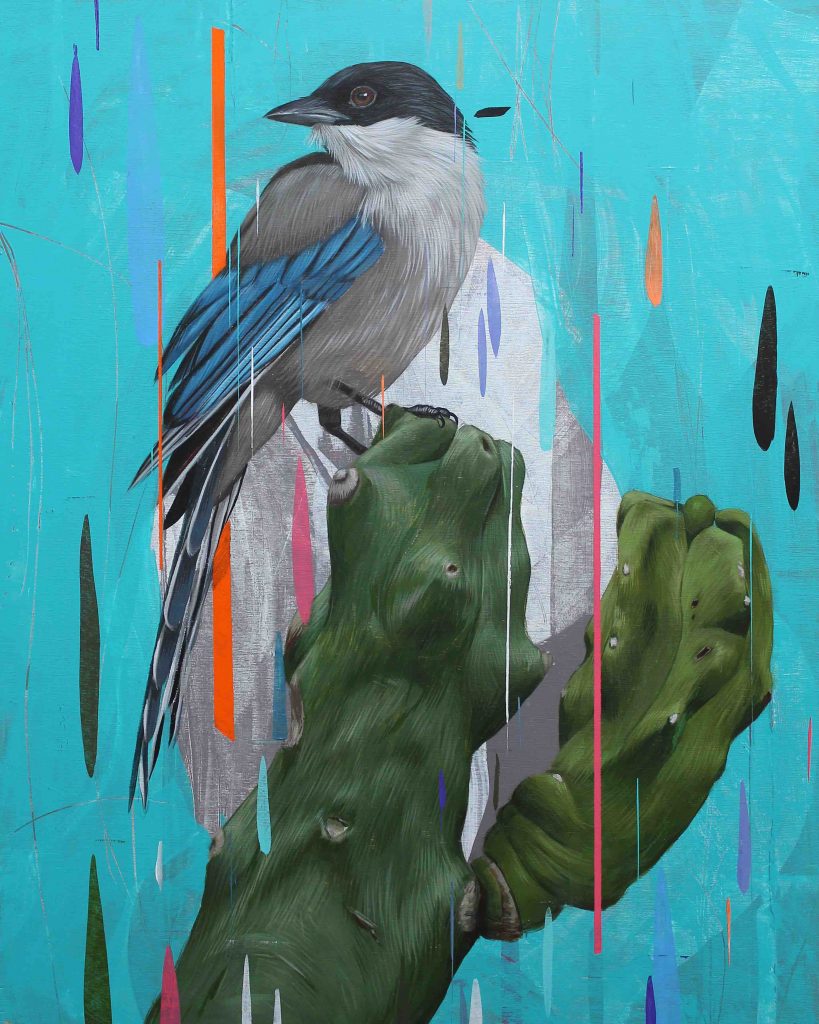 Eventually Gonzales got a job as a preparator at the Mesa Contemporary Art Museum. Now he does art when he can, which sometimes means waking up at five in the morning to paint. Recently he’s done murals at Starbucks throughout the city and shows in the annual Chaos Theory exhibition. He has exhibited throughout the West Coast and in Santa Fe. He has a kid with his partner and has a studio in his mother’s backyard. The hero has returned, and he’s happy. 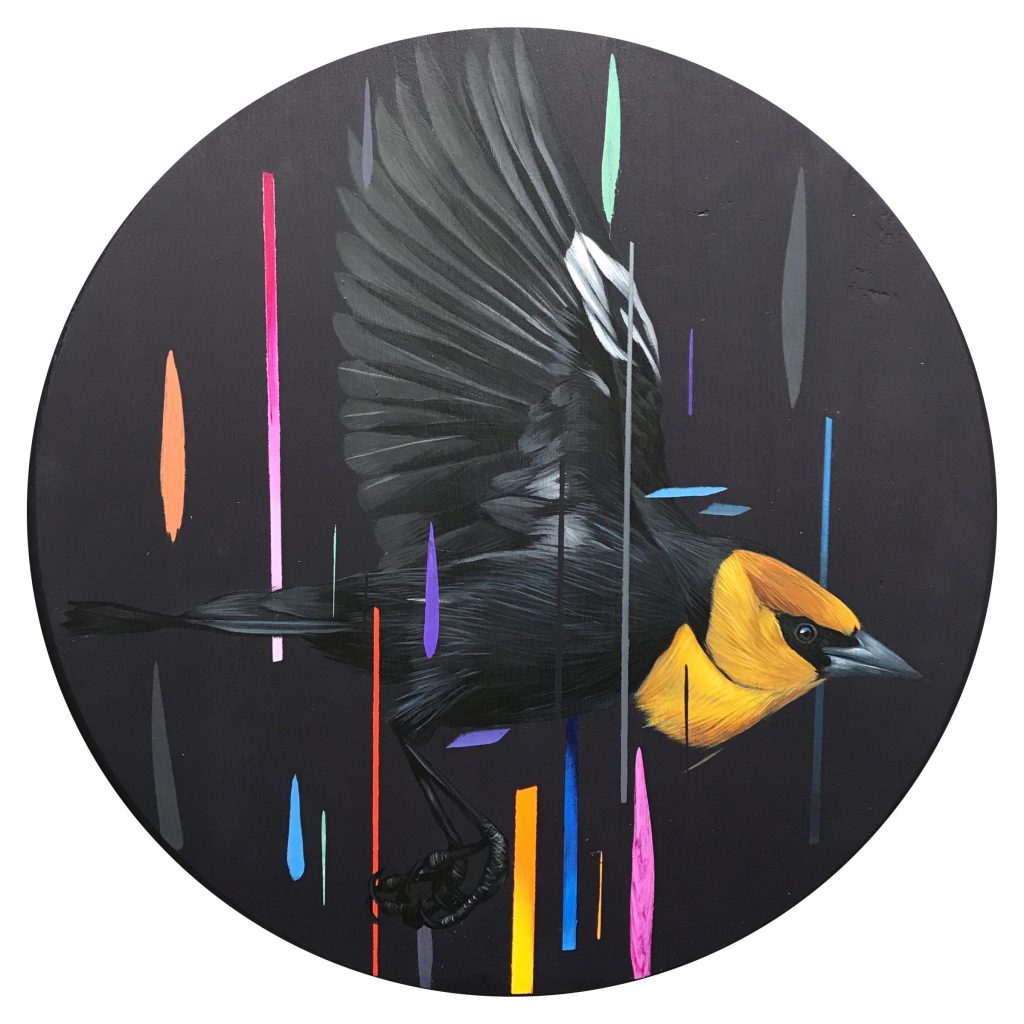