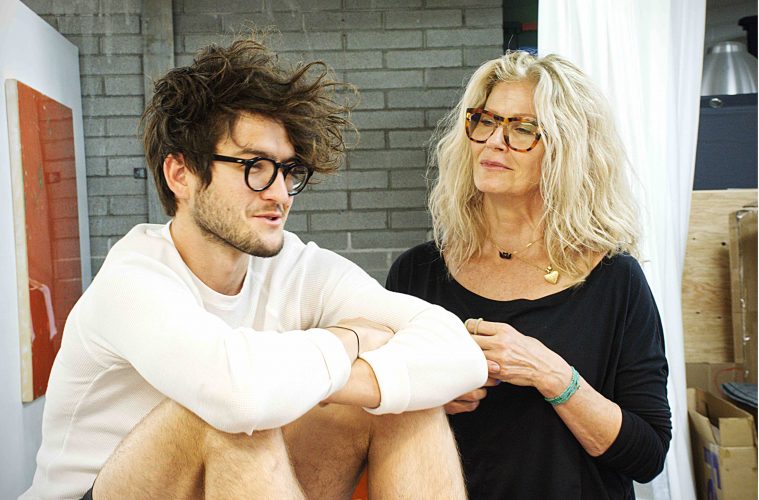 Sherri Belassen greets visitors to her gallery and studio with a warm smile and a large, loping Weimaraner named Bizou. Her son Gino, just a few steps behind, has an equally engaging smile.

The morning sun is pouring in through the open garage door at Belhaus Gallery, where a select group of minimalist contemporary paintings hang in a space custom-built to house the art and a gleaming espresso machine. The machine is topped by a collection of espresso and coffee cups sourced from Scandinavia.

Artists’ work from all over the globe – from New York to London to Poland then back around to Los Angeles and Phoenix – complete the cosmopolitan vibe at Belhaus. Even the gallery’s name is a mashup of the owners’ last name and the Bauhaus art movement.

As we pass behind the espresso machine to duck into a bright, open space containing two studios, Sherri offers a coffee and waves her hand. “This is where we work,” she says. “The coffee and the gallery [up front] help form a sense of community.”

“It works very well, too,” Gino adds. “We have people drive in from Chandler, all around really, to come hang out in the gallery and drink Fio’s coffee.”

Fio is Anthony Fiorelli, the owner of Caffio Espresso, which operates from Belhaus during gallery hours (Thursday – Sunday, 10 a.m. – 2 p.m.) and at various markets and private events from the back of a Vespa Apé truck. “We couldn’t make it here without Fio,” Gino continues. “When he’s here, the gallery is open and we don’t have to worry about anything. We can take care of our own work.”

For Gino, that work is varied and wide ranging. He studied design and advertising before earning a BFA from Chapman University in Orange County. He’s working with a friend on building BonesFC (Bones Football Collective), where soccer fandom, apparel, and art meet.

Gino’s paintings are minimalist contemporary, like the artists Belhaus represents. “We want to make sure that it all works well together. It has to blend well. All of our work, mine, my mom’s, and our artists’, can hang together cohesively,” he said.

But an art career wasn’t Gino’s original plan. As a soccer player at Arcadia High, Gino grew up thinking he’d work in sports. “I was very lucky to play with a creative coach who encouraged me to think improvisationally on the field. I learned quick thinking and had an internal understanding of the game,” he says.

“I thought both the boys might be sports agents like their dad,” Sherri said. But that wasn’t to be. An injury in high school sidelined Gino for two years, so he started thinking about what to do while he waited to get back on the field.

“I always saw my mom painting, and I saw how hard she worked to make her art and to support us,” he says. “During that two years [spent recuperating], I started thinking about how to channel my creativity into painting.”

As a single mother with two boys to support, Sherri never thought about doing anything other than making and selling her art. She didn’t see any reason why Gino should do anything else, either. Sherri had always encouraged him to paint as a child, and Gino didn’t think that being an artist was out of the ordinary.

“I’m so lucky,” he says. “I have a lot of friends who want to be artists, and they have to get permission from their parents to study art. It’s always a negotiation with them. My mom just said, ‘Yeah, go be an artist.’”

Sherri immediately agrees. “I told him to go paint. If that’s what you want, go and paint.”

But she also passed down some practical wisdom from her own mother. “Mom always used to say that if anything is worth doing, it’s worth doing well. I’ve always applied that to my life and to my art,” she says.

She came by those heartland values honestly. Sherri was raised in Indiana, and earned a BFA in painting from Indiana University in Bloomington. While she was in college, her parents bought the town of Tortilla Flat, so she came to Arizona after graduation. She soon met a gallerist from Dallas who offered to represent her. That allowed her to get a studio in downtown Phoenix. So for her, finding studio space in the Bragg Pie Factory building is a return to her artistic roots.

Sherri rented the space three years ago during a downsizing period. She wanted a studio that wasn’t in her now-smaller home. The impetus for creating the gallery came from Gino. After college, he applied to an art fair in Australia. The notice that he’d been accepted prompted him to complete about 20 pieces in two and half months. He sold 13 pieces at the fair and realized that he had what it took to create and sell his work.

When he returned to the States, Gino and Sherri put their heads together to decide where he should head next. “Obviously, I thought about New York,” he said.

“He could have gone nearly anywhere,” Sherri chimes in. “We have family in Paris, Spain, Copenhagen. There were so many possibilities.” Gino takes up the story again. “But I kept coming back to Phoenix and looking around. This is home. I grew up here. I realized that I wanted to stay.”

So one evening while he was visiting Sherri at her new studio, he looked around at all the space, then filled with overflow from her downsizing. “I realized that there’s enough space here for two studios. And so I started helping Mom get rid of all that extra stuff,” he said.

Soon the two Belassens were living and working together. They both say it’s a great situation for them. In one way, ironing out their differences in work style led to creating the gallery. Sherri likes long hours of solitude while she works. But Gino loves being around people and making new friends. He quickly realized that the growing crowds around the other galleries on Grand Avenue presented a chance to build the community he’d wanted to find back when he was exploring moving to a larger city with more opportunities for artists.

“I realized that we could be a part of building that culture right here. I want that culture, and this is home, so why not figure out how to create the culture I want?” But first he had to find a way to integrate the space and pull traffic from Grand Avenue. Belhaus is located on McKinley, around the corner from the main foot traffic on First and Third Fridays. So they built a couple of movable walls to separate the gallery from their studios. Gino also knew that he wanted to bring in an expert to run the coffee shop that he hoped would draw people in. So he went on Instagram and looked for what he needed.

“I found Fio pretty quickly and Instagram-messaged him. He showed up here within an hour. Before he left, we all felt like family,” he said.

“Yes,” laughed Sherri. “I call him my third kid.” To draw people in from the street, Gino and Sherri installed strip LED lighting around the garage door. You can see the bright lights from Grand Avenue when the gallery is open, but the lighting has another, more community-oriented purpose.

“People come and take selfies when the garage door is down,” Gino said, showing Instagram pictures of kids framed against the door after dark. They intentionally installed the light switch outside the building so people could use the lighting to take their photos. “We love it when people use the gallery as a backdrop,” Sherri said. She just wants everybody to remember to turn the lights back off when they’re done.

The Belassens say they weren’t especially prescient about the center of gravity that was building in the Grand Avenue art scene. But they feel fortunate to be a part of the community there. The gallery will have extended hours (10 a.m. to 8 p.m.) for the Grand Avenue Festival on November 9.

They’re getting ready for a show set to open on December 6, called “Bad Neighborhood.” Caffio Espresso will be open, and they’ll have live music outside. The show will feature their own work, plus that of Preston Paperboy, one of their represented artists. “We’re still deciding who else to include,” said Gino. “The name of the show and the names of the pieces we’re choosing are a little tweak for some people who might still have the idea that artists only work in bad parts of town.”

That couldn’t be further from reality, says Sherri. She points out that while it’s true that artists have always been at the forefront of gentrification of the neighborhoods they live in, Grand Avenue has changed in the three years that she’s been there. There are more galleries and more coffee shops and restaurants opening all the time.

The building across McKinley from the gallery has been vacant for years, Gino said. But it recently sold to someone who’d been watching the neighborhood become more commercial.

“He told us that he felt comfortable buying that building by seeing us succeed. I feel really good about that,” he said.

And he should. Belhaus Gallery is helping to create a sense of culture that the Belassens want to live and work in.