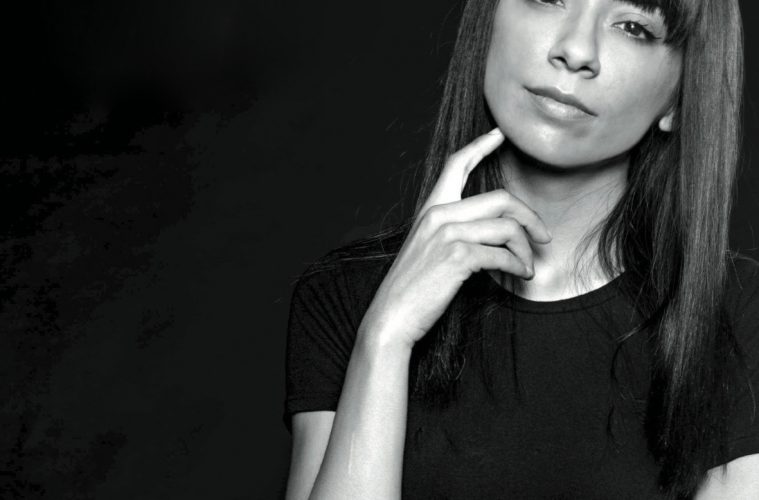 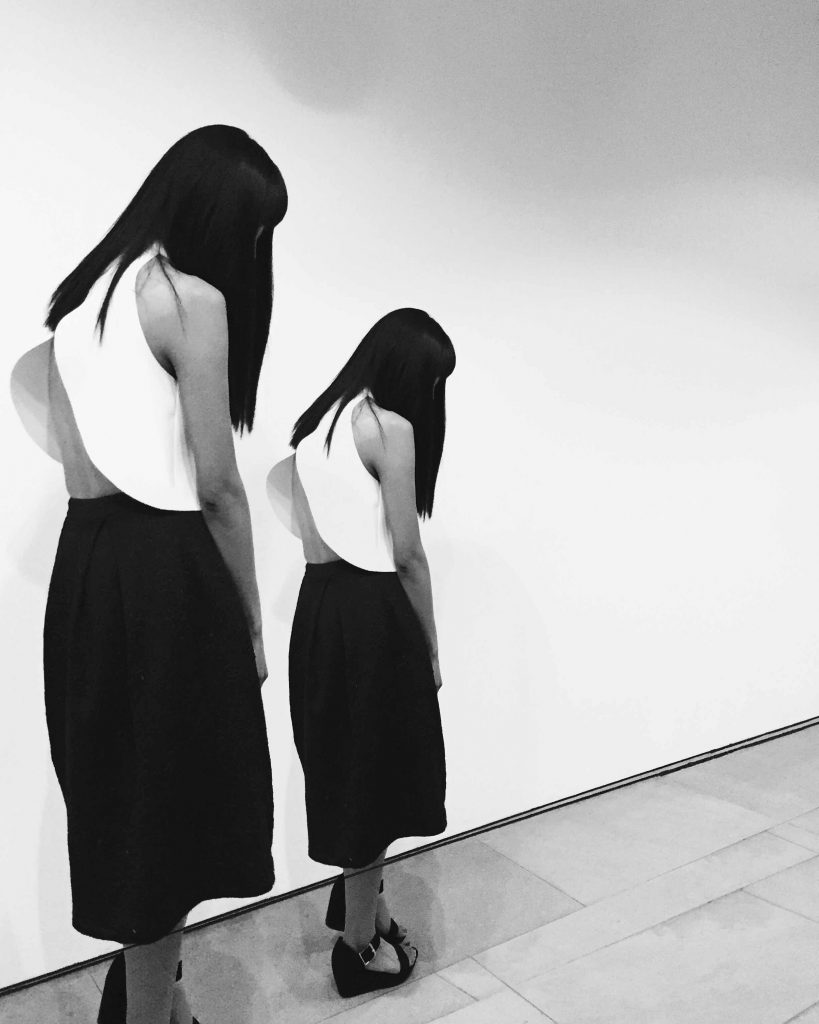 No two fashion designers share the same story. That said, Alejandra Inzunza’s emergence on the scene might be particularly unique and full of kismet. The young Arizona-based designer graduated from the Art Institute of Phoenix with her bachelor’s degree in fashion design in June 2016.

Growing up in the border town of Douglas, Arizona, Inzunza says she never felt like she fit in. She was into the arts, embraced her dark and moody side, and in her notebooks she liked to draw fairies, a form she says probably sparked her interest in drawing women’s wear. “In high school, I had an obsession with fashion magazines,” she says. “I always liked the editorial themes—especially Vogue.”

After high school, she served in the Marine Corps for four years. During this time, she moved around the country a lot. She considered continuing her service in the reserves, but that idea was short-lived, and in her early 20s she committed to pursue her interest in fashion. 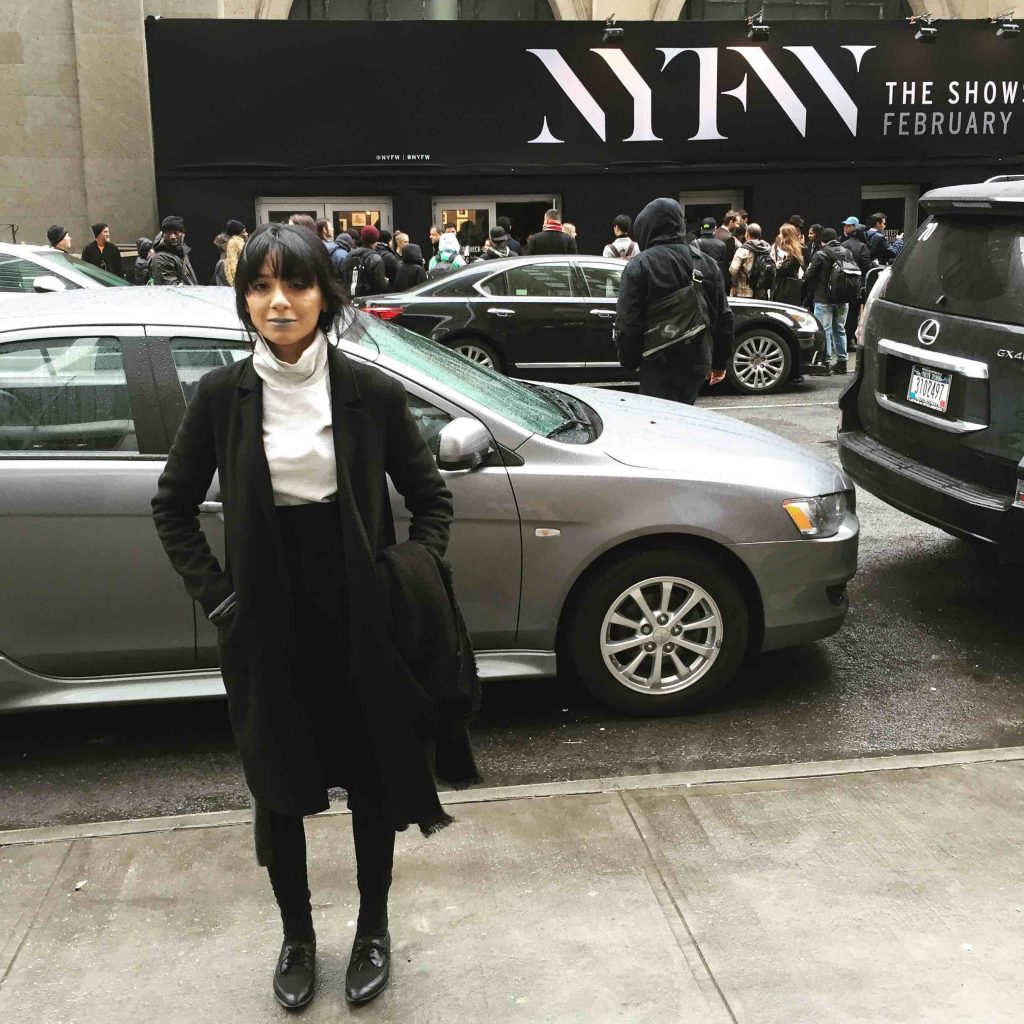 Prior to graduating from the Art Institute, Inzunza made a splash as a guest designer at New York Fashion Week in February. She had heard about a competition for young designers at school and decided to go for it. Out of 40 finalists who were selected for the audition, she was one of a dozen who got to show their looks in NYC.

Everything was handled professionally. Her school covered the costs of the trip and shipped her garments to New York for the show. The walk was a success, and she has since received several requests from the media. “I don’t know if I would have gotten this far if I hadn’t gone to New York,” she says, beaming. “It was truly a life-changing experience.” 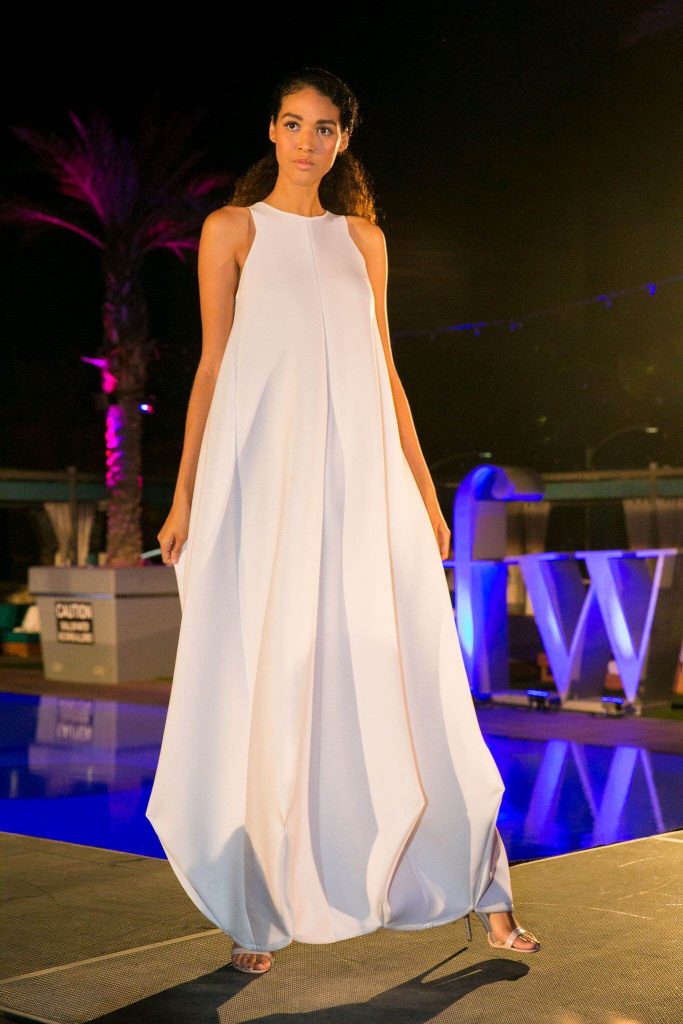 Inzunza’s goal is to move to New York City and work with an established designer. She is currently applying to many different NYC houses. Her name is out there, and the requests are coming in. For the time being, Inzunza is sketching and sewing her new looks when she has time, around her full-time job and home life. She works at Wilderness Tactical Products in North Phoenix sewing combat and tactical outfitting accessories.

Inzunza didn’t originally plan on starting her own line, but the curriculum at the Art Institute focuses students in this direction. She’s been fortunate because her collections have already given her a very valuable foot in the door. In many circles, her name is out there and she is already considered a designer.

But if she’s going to go big, she feels she needs a team. Ideally, she would be the ideas person, knocking out her visions and steering. She would probably need a project manager and a seamstress. A stylist and an assistant wouldn’t hurt, either. In the fashion world, a dream team often requires many different able bodies. 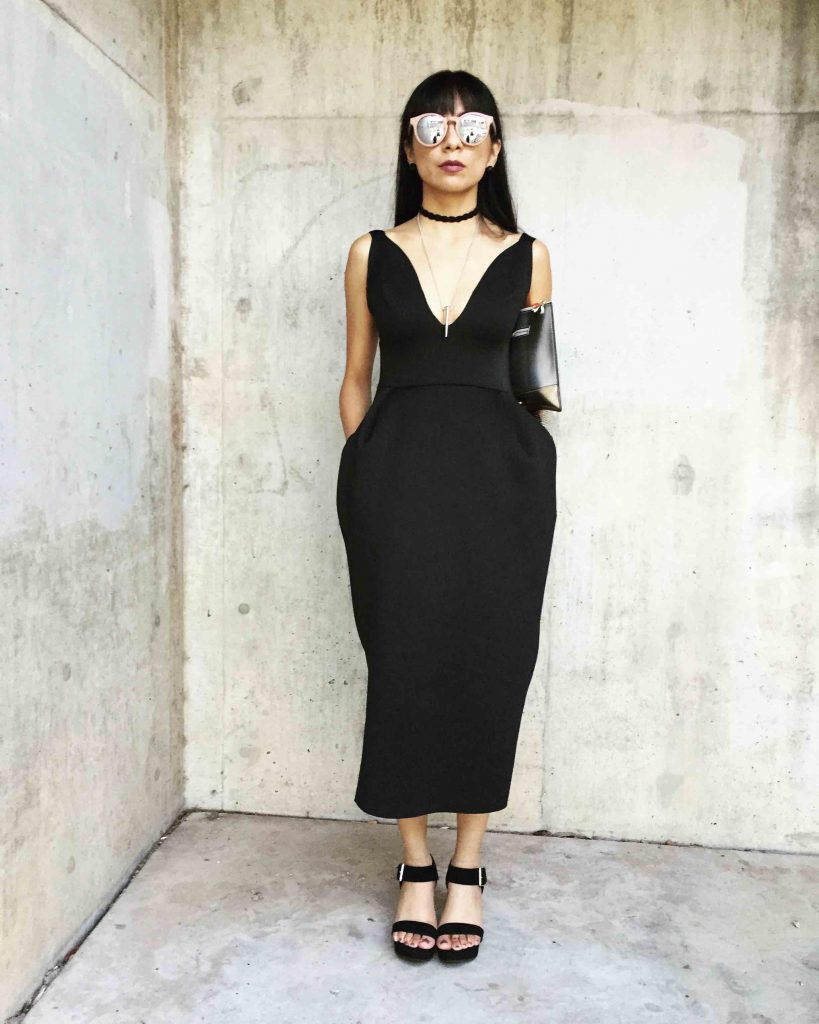 Inzunza has a seven-year-old daughter, but she says she doesn’t want to be labeled or identified as a “single mom.” It’s not that it has a stigma, but the opposite: she doesn’t want anyone to think she’s playing up her parental role for sympathy or using it as an excuse to be less than the best.

While she was enrolled at the Art Institute, she participated in an internship at Valley Youth Theatre, working with Carol Cooper on costume design and construction. She got to work on some fun plays, such as “West Side Story” and “Narnia.” While it was good experience, she says creating costumes is very different, not exactly what she prefers to do with garments. “The internship offered me a little more experience, but at the same time, it’s not the style of work I like,” she says. 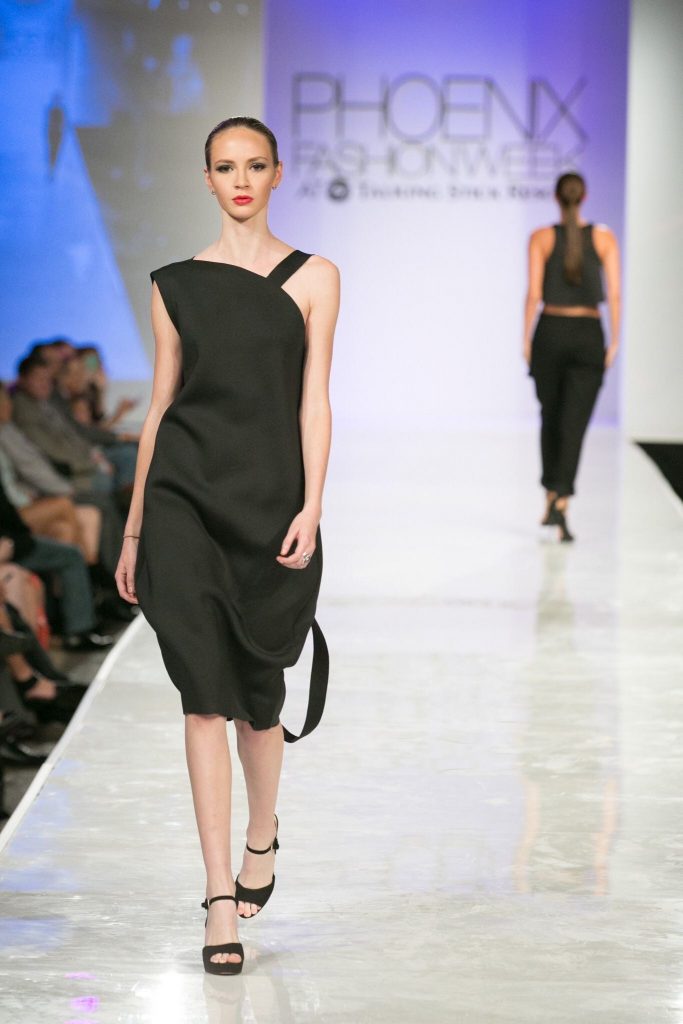 In August, Inzunza participated in a senior portfolio show called New Faces, sponsored by the Art Institute and Ford Robert Black Modeling Agency. Inzunza brought the same collection that she debuted at New York Fashion Week, adding six new pieces.
For the show she chose to work in white. She discovered Neoprene while working on a white shirt project last year and fell in love with it. She says it allowed her to create the geometric, architecture-inspired shapes she was going for. 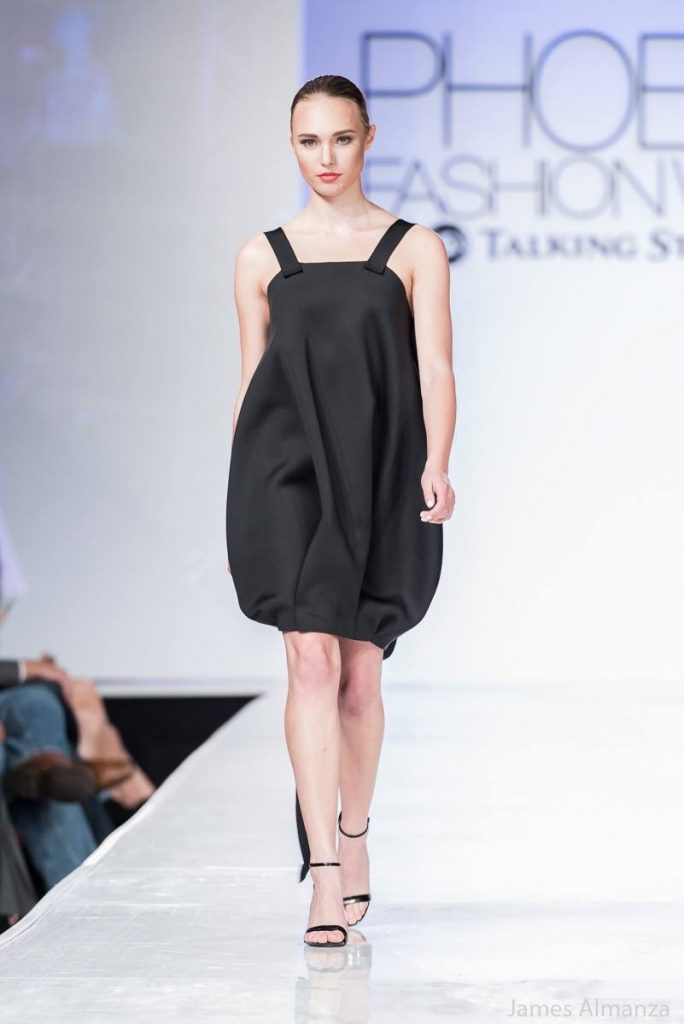 Her second show was titled Silent Epic. She describes it as very minimal, futuristic and architectural, and most of the looks, except for the finale, were in black. Inzunza is in love with black; she’s always had a bit of a dark side. “I wear black every day,” she says. “I don’t dress gothic, but I’ve always liked the goth stuff. I don’t like to design things you can find in stores,” she says. Her finale look was a very angular gold dress with exaggerated triangular hips, which almost read like jodhpurs.

Inzunza’s vision has taken her everywhere from the very practical to the practically unwearable. For example, the inspiration that sparked her second line simply came from her trying to sew a formal dress for herself. What she came up with was a very chic black floor-length dress with a plummeting neckline. This gown opened the door for many sister pieces. Some have cutouts like enlarged keyholes, and some leave the shoulders or the high waist exposed. 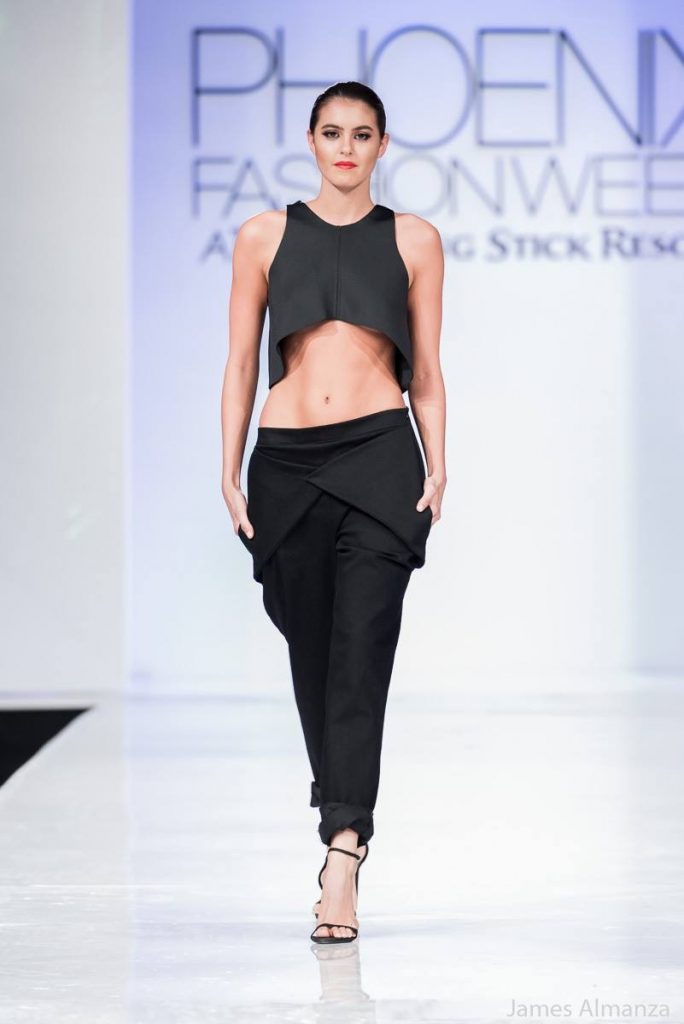 Inzunza takes inspiration from designers such as Marc Jacobs, Zack Posen and Alexander Wang. With Wang, she doesn’t necessarily always love the looks, but she loves his shows, the spectacle. He’s like the real fashion “it boy.” Inzunza herself is being more selective about saying yes to shows and work around the Valley. She describes herself as much more downtown Phoenix than Scottsdale. “In Scottsdale, all they want are cocktail dresses, and I hate cocktail dresses!” she says. She did the Scottsdale Fashion Week preview show and didn’t really connect with the audience.

She also participated in a student showcase as part of the White Shirt show at Phoenix Art Museum last year. She and her classmates presented their own white shirts as an homage to Gianfranco Ferré. While hers wasn’t the only male shirt, it was the first and only piece of menswear she’s ever done. She worked with Neoprene, her white fabric of choice, and was proud of it, despite some comments that it looked “weird” or like it was designed backward. “People were asking if it was a costume,” she says, scrunching up her nose. 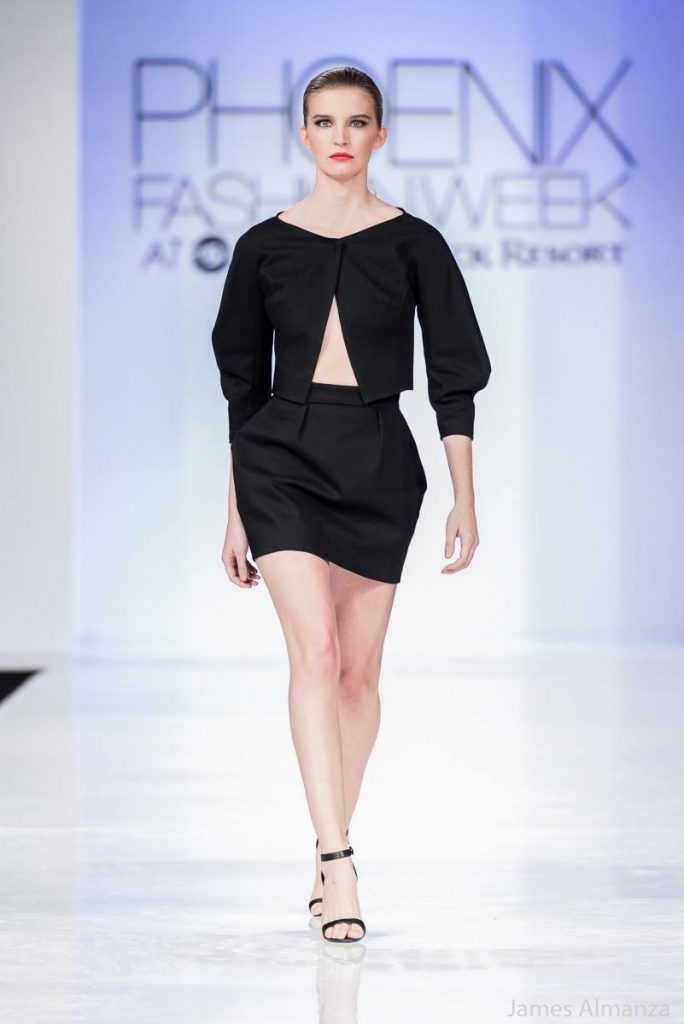 In October, Inzunza collaborated with Palabra Hair • Art • Collective. The show, again at Phoenix Art Museum, was part of the programming connected to the Kehinde Wiley opening. A group of models and actors did a performative piece in the lobby with women dressed in Inzunza’s gowns. Palabra tied long hair into thick braids connecting each model by the head. The women almost looked like robots connected to the power grid by a chain of human hair extension cords. 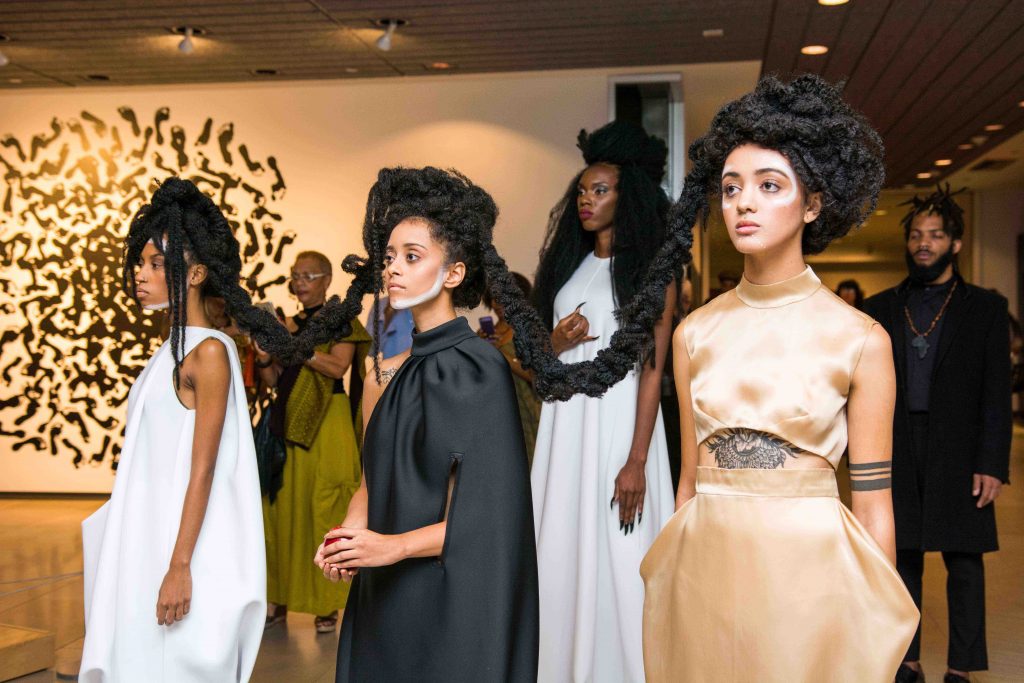 When Inzunza collaborates, she says she’s learned to stay on deck and be very in control of her looks and models before they debut on stage. She learned that from a bad experience. One of her finale pieces, a long, sexy red gown with a corset top, went on the runway without her checking the model. “When I showed this dress for the first time at Phoenix Fashion Week, the model came out with the corset very crooked,” she says. “She wasn’t wearing a bra, and you are not supposed to wear this dress without a bra. It just looked a mess and I wanted to run away!”

Right now Inzunza is working on new pieces. This new line is more of an art collection and is not necessarily practical or wearable. She has had no shortage of offers to collaborate. Sometimes she loans clothing out to other designers and local fashion scenesters for their shoots. She recently worked with Parisa Zahedi, who started the online fashion company curiios.com, on a shoot for Blum Magazine in December.

Where her career will take her is up in the air. She loves New York City, but not Los Angeles. She says she also could see herself in the international market, perhaps Milan, Paris or London. “I really love London the best,” she says, with a sparkle in her eyes. At the time of our interview, Inzunza mentioned that she’d just received another invitation to participate in a show in New York, with a possible connection to London. She didn’t have a lot of the details, but is hoping it is yet another door-opener.