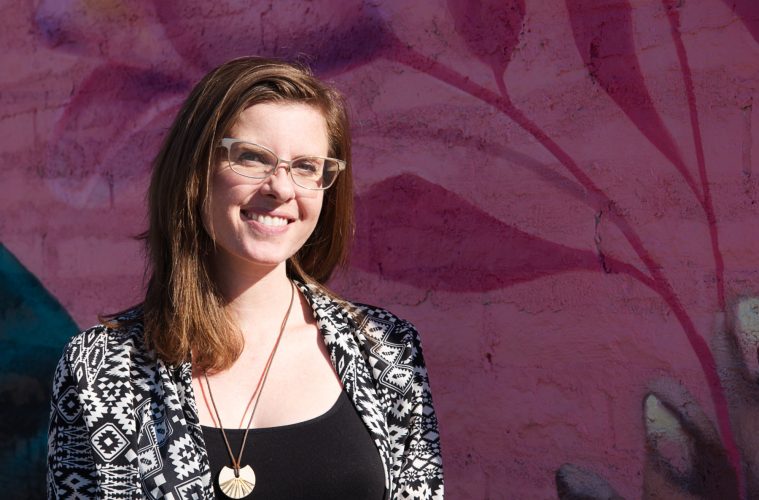 Nicole Underwood has dipped her fingers into many art forms, including photography, graphic design, and music performance. Along with Greg Esser, she’s co-author of a 2016 book that describes how artists led the revival of Roosevelt Row. “I’m a generalist, but I love working with specialists, with people who have dedicated their lives to a specific craft,” she says, explaining her wide-ranging work background.

In the 15 years or so since she moved to the Valley of the Sun, Nicole has earned three associates degrees, directed operations at Roosevelt Row Community Development Corporation, worked as a senior member of a campaign and public affairs firm, and worked with the School of Design at ASU as a communications specialist.

Two years ago, she founded Underdog Creative Consulting, and that firm’s mission – elevating the power of arts, local businesses, and entrepreneurs, one story at a time – explains why Nicole is such a good connector of people and ideas.

This year, she founded another company, the Zenith Experiment, for promoting music and musicians in downtown Phoenix. “I like to describe myself as a pollinator. I want to help create sustainability in those connections where people are planting seeds.”

Most of her pollination efforts have been focused in downtown Phoenix, where she moved in 2010. She loved the vibe that was just starting in her neighborhood, and looked around for places to volunteer.

One of her favorite volunteer gigs was at the annual Pie Social benefitting Roosevelt Row. Part of that love is because, as her LinkedIn page says, “I firmly believe that pie will change the world.” But making connections – possibly over a slice of pie – is also a big factor.

“I started asking questions about how I could help Phoenix become a proper city. How do we make it feel like a neighborhood?” she asked herself and her neighbors. Back then, the downtown area didn’t have a consistent network of sidewalks that would encourage neighbors to mingle and adopt a pedestrian lifestyle. So she started working with local small-business owners, particularly those advocating for bicycling downtown.

Part of the effort to make downtown more livable was creating bike lanes that would help residents get around without cars. Nicole was so inspired by this work, and the creeping price of gasoline, that she was able to park her car for six months. When that trial period proved successful, she traded her car for a bike that she used to get around town.

After years of volunteering and advocating for a better downtown (she’s served on the board of ArtLink and currently serves on the board of directors for the Phoenix Chorale), Nicole started asking herself where she could go beyond what she’d already accomplished.

“I’ve always loved the visual arts. It amazes me to learn about the process visual artists go through to make their art. But the through-line for me, in all my explorations in the art community, has been music and music performance.”

So about a year ago, Nicole started asking musicians about their experiences with live music downtown. “I wanted to know what it was like for them to perform and whether they felt they were able to connect with their audiences,” she said.

She’s inspired by the passion of the music community, especially the reality that means most musicians make their money outside a music career, but are always practicing their art and performing after their workdays are done.

She describes one intimate musical performance that drove and still inspires her current passion for connecting musicians and audiences. She talks about the special atmosphere where the musicians were allowed to transport their audience to an almost spiritual place.

“I was profoundly moved by the musicians’ emotions. I couldn’t find the words that described that experience,” she said. “But I looked around the room and saw that the rest of the audience was as moved as I was. And I wanted to experience that all the time.”

One thing she noticed immediately was how many venues create an artificial distance between performer and audience. “The audience is physically removed from the musicians, who are on an elevated stage,” she said. And the musicians she was talking to said they wanted to communicate more with their audiences.

“They’re already great storytellers,” she said. And they have a lot to say beyond just singing their songs. “I wanted to give them an opportunity to engage. Some musicians might say a couple of words between each song. But I wanted to create an atmosphere where they could talk about what was happening in their lives when they wrote their songs.”

The first event was held in her backyard, with two bands – Hotel on Fire and House of Stairs – and a small, rapt audience.

“Holly [Pyle] was going through a divorce and she arranged her songs chronologically to tell that story. She spoke about her isolation and how she was processing those emotions. She spent time [between songs] describing what she was going through. It created very touching moments, where she’s being vulnerable, and that let people have their own emotions.”

Nicole says she looked around her backyard to see that the audience and musicians were all engaged with each other, just as she’d hoped. “I could see the fourth wall being broken and people sharing the moment,” she said. “It was a very healing process for me.”

That success proved to Nicole that she was onto something. It led to more events, always held in non-traditional venues. “I walk around town now and I’m always wondering how to activate a space with a performance. I see alleys, retail spaces, and galleries as venues now.”

Last September, Nicole produced a four-day celebration of the Blue Note record label, which included live music, an exhibition of albums, and the screening of a documentary about Blue Note.

Since October, she’s been working with the monOrchid and True North Studios on a weekly Wednesday night event featuring The Stakes. The band performs two one-hour sets, one where they do their own music and another where they bring on a guest musician. Recent guests have included Camille Sledge (Phoenix Afrobeat Orchestra), Geibral (Geibral Elisha Movement), Carly Bates (Hyperbella), and Laura Beren (Palo Brea, Decker).

Nicole and True North want to make sure you have a relaxing evening of music, complete with food and beverage. So you can place an order from the neighboring Dressing Room without having to get there early or do takeout. Just grab a seat, and a server will take your order from the gallery where the musicians perform.

And if you want to be more than just an observer – and you’re brave enough – The Stakes always reserve time and space for an open mic call, usually near the end of the second set.

Around the same time Nicole was launching Wednesday evenings at monOrchid, she also founded the Zenith Experiment, her production company. The name reflects the experimental nature of the musician and venue matchups she’s creating.

“Zenith is that high point just above you on the horizon,” Nicole said. She wants to make sure that her company always presents shows that let musicians and audiences make a true connection. She’s currently nailing down the location for her Soulhouse Series, which starts in late January and will feature soul, jazz, and funk music. Check her just-launched website (thezenithexperiment.com) for venues, times, and musical lineups.

Nicole is also working with DTPHX Wilderness to create a regular jazz on the patio experience each third Thursday of the month. The first event is set for January 16. Again, check the Zenith or Wilderness website for artists and times.

Then on March 5, the Zenith Experiment will present what might be Nicole’s most ambitious project yet. She’s helping musicians and chefs collaborate on a multi-sensory experience. She’s paired James Beard Fellow and Breadfruit chef Danielle Leoni with musicians from the experimental musical group Oh My Ears (OME).

OME is already experienced in working with non-traditional partners in non-traditional venues. They perform at a monthly Poetry Orchestra at Film Bar (on the first Tuesday of every month) and produce an annual music festival that brings in musicians from all over North America to perform in venues around downtown Phoenix. They’re dedicated to finding and working with national and international musicians who may play ancient instruments that produce sounds most audiences have never heard.

“We’re planning to show people the ingredients of a song, and let them experience the notes of a dish,” Nicole said. “We want them to see how eating a specific dish while a specific song is playing can bring something to both experiences. Plus we want to find out if there’s a shared language for describing this kind of communication.”