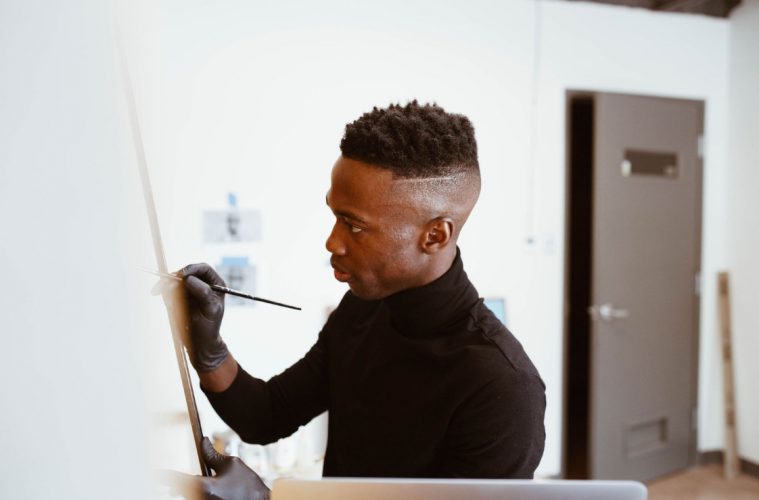 Myth-busting is one of the pillars of Papay Solomon’s success.

Hard work is another: His Phoenix studio is lined with large, vibrant, and hyper-realistic paintings of African-Americans, whose expressions are as complex as their multicultural clothes.

It’s mid-December, and Solomon, 26, works early in the day to finalize a portrait for his upcoming solo exhibition at the Joseph Gross Gallery. Solomon has covered most of the canvas with rich paint, yet there are a few small, blank spots near the man’s nose and left eye that have yet to be enlivened.

Soon it will be complete – or as much as it will ever be, as part of the uniqueness of Solomon’s work is his stylistic incompleteness, which he takes from the Italian non finito technique. Then it will be on to the walls of the Tucson gallery in January, as part of the artist’s first solo exhibition, African for the First Time.

Solomon, a Guinean refugee who moved to the U.S. at age 14, used this opportunity to explore the ways outside forces impact African identities.

“Back home, we think, ‘Oh, we’re going to this fabulous country where freedom is for everyone,’ and ‘I’m educated, so I’m going to be looked at as an educated person without any stereotypes attached to it,’” Solomon said. “Then we come here, and realize, ‘Huh, so now I have to be an ambassador for the entire continent.’”

In Africa, Solomon’s identity was first and foremost national. In America, people paid less attention to his identity as a Guinean, instead perceiving him as an African above all else. “I have many stories where I’m in class and the only African, and I have to answer for issues that are happening in places like Egypt,” he said. “I don’t know how Egyptians do their thing.”

He’s not alone in this experience. While reading Americanah,a novel by Chimamanda Ngozi Adichie on African identity in America, Solomon found his feelings reflected on every page. It triggered an inner examination of the meaning of African identity, especially in the shadow of the 1884 Berlin Conference, which preceded the colonial partitioning of Africa into separate countries.

“Before this, we were Africans,” Solomon said. “Then that got divided into pieces, and over time, we became trained to think nationally instead of connectionally, and we come here, and we get slapped in the face with that continental perspective, so I was interested by that and processing those ideas.”

Through his solo exhibition, Solomon seeks to start a conversation about what it’s like to be an African in the West. The title, African for the First Time,is a play on the way he’s perceived: People see him as “the guy who paints Africans,” so the name pokes fun at that idea.

However, he’s far more than that perception may suggest. Solomon instead sees himself as a servant whose duty is to truthfully portray other people’s stories.

Critical to this mission is the rejection of stereotypes surrounding immigrants and refugees in American culture. The complex emotions of the people in his portraits, the clothing they wear – both American and African – and the precise, naturalistic style that captures every feature deny the viewer the opportunity to judge or pigeonhole. Instead, every aspect of Solomon’s art flows together into true-to-life portrayals of fully realized individuals with stories they’ve carried across continents.

In order to ensure that he faithfully portrays each person’s unique character, Solomon sits down for an informal interview before even lifting a paintbrush.

“Representation is important, so important. To me, it’s critical that I’m represented correctly, so I like to pay that forward with people I sit with: Do unto others as you want done to you,” Solomon said. “I’m trying to paint life, not just portraiture.”

The people Solomon paints appreciate his efforts. One of his close friends, Benjamin, overcame his reticence to sit for a portrait. When Solomon posted the painting’s recent completion on social media – thus spreading Benjamin’s face far and wide – Solomon got a 5 a.m. phone call.

“He calls me, and he goes, ‘Why are you doing this to me?’” Solomon said, laughing. “Eventually, this turned into, ‘Thank you for giving me life.’ He’s a very quiet person, a private person, and we joked about how he wanted to reserve his privacy and reserve his quiet life, but here I went with my artistic self, blasting him.”

This painting, called “HEAVY(WEIGHT),” features a dark, golden background that contrasts with the cool, blue colors in Benjamin’s face and clothes. Although the yellow canvas projects vivacity, the cool-toned solemnity of both Benjamin’s expression and the shades used to portray him give the viewer pause.

It is in this visual dichotomy that Solomon expresses a crucial theme that is ubiquitous throughout his work: displacement.

The theme runs through Solomon’s life as well as his art. “Back home, I’m just an American boy, now. I sound American, I speak American, I move American, but with an African flair,” he said. “I came to the acceptance that I’m never going to fit in anywhere, anymore. Then again, that’s a privilege that most people don’t have, because I’m able to use both sides to approach things in a unique way.”

“HEAVY(WEIGHT)” portrays its displacement through space and details as well as colors. In the painting, Benjamin wears a white hat with a detailed blue band, as well as a low-hanging necklace chain, yet neither is completely shaded in. They are present, but not fully realized.

“I’ve tried to exhibit that displacement, but also make it feel balanced so that you’re, in a way, tricked into thinking that everything is complete, but if you look closely, the hat is not painted at all. It’s very 2-D, but with the band, your eyes are deceived, so you think it’s all painted,” Solomon said. “And the chain: you might not notice it, and the – I call them veins in the fabric – that’s the raw canvas, but on first glance you wouldn’t think that’s what it is. So that’s how I exhibit my displacement, in a sense – or theirdisplacement, because this is their story and also my story. So I guess it’s a double play on me reflecting on myself through them.”

In this way, each painting Solomon produces functions as a double feature: Not only does it tell the story of the people who are being portrayed in vivid, complex colors, but it also leaves hints about the artist behind the image – one who is undergoing a constant journey.

“I don’t feel complete inside because I’m not fully me yet, or I’m not quite where I need to be in my mind. This is just a start, so in a sense, I could use that as a metaphor for my journey as an artist, and the message that I’m trying to get across, and the legacy I’m trying to leave behind,” Solomon said.

That legacy started when he was five years old, after his mother fled from a civil war in Liberia and Guinea. His early life was peaceful, but after a civil crisis, his family had to relocate to a refugee camp.

“Around that time, I discovered that I had an ability,” he said. “I used it to help me go through the emotions of not knowing what was going on and being a little kid and a lot of other things, so that was kind of my way for figuring things out.”

Back then, he used whatever materials he could find. “I doodled a lot in my notebooks, which I would get into trouble for because we didn’t have much, we didn’t have anything,” he said.

Even then, he had a penchant for drawing human faces. “I’ve always been attracted to people,” he said. “Back then, it wasn’t concrete: I was trying to obviously understand this newfound ‘toy’ of mine, so it was mostly people, mostly faces, but I also drew random things like cars and flags, you know. As a five-year-old, I always explored, but it’s always remained people.”

Despite his childhood dream of becoming a professional artist, Solomon also pursued computer programming out of pragmatism. “When I graduated, then I started thinking about all the myths I’ve heard about art: ‘Obviously, it’s not going to pay the bills,’ and ‘struggling artist’ and all that, so I took a break from art for about two years,” he said.

Working with computers didn’t make him happy, though, so he returned to art, graduating from Arizona State University with a bachelor’s in fine art. His work has been featured across the country. One of his proudest accomplishments was when he was featured in the 2018 Phoenix Art Museum Artists’ Grants Recipients exhibition.

Much of his success Solomon attributes to an unrelenting work ethic – as well as his drive to spread an important message about refugees through his artistic legacy. “The main message is that we belong just as everyone else, and in every way you can think of that,” he said.