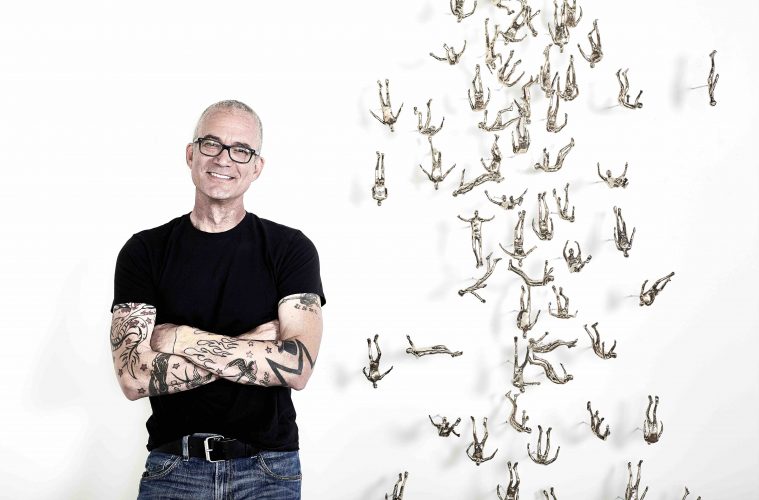 Metaphysical Bronze: The Life and Work of John Tuomisto-Bell 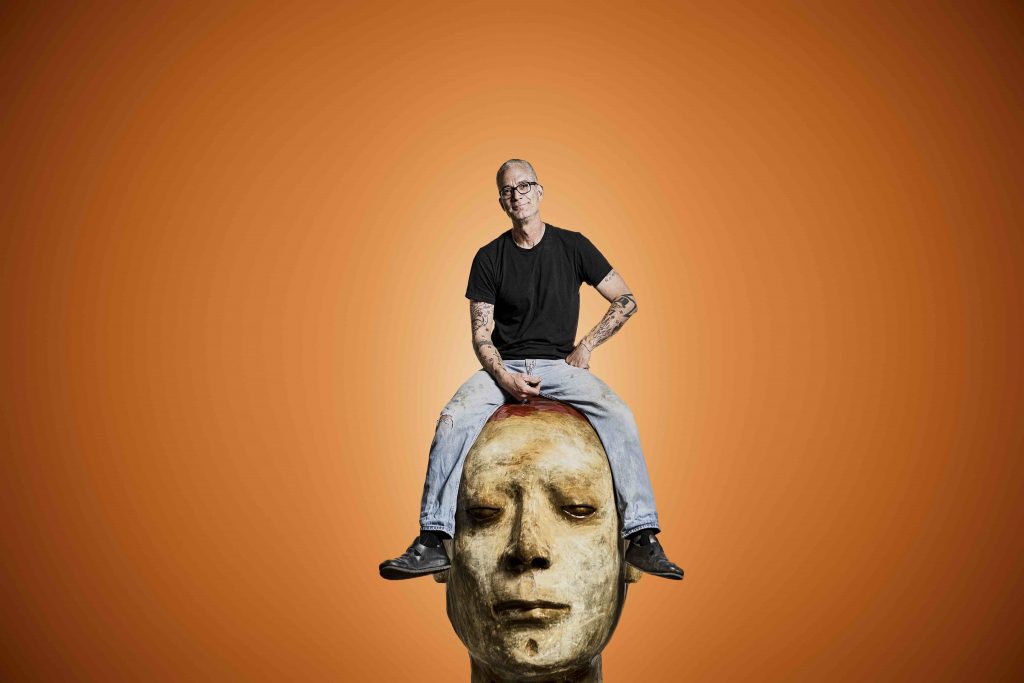 Prominent Valley sculptor John Tuomisto-Bell was born in Chicago, Illinois, and eventually settled in Arizona where he went on to receive a Bachelor of Fine Arts degree in sculpture from Arizona State University in 1991. During his time as an undergrad, Tuomisto-Bell explored painting but eventually gravitated toward bronze casting where he had the opportunity to train under veteran sculptor and professor James White.

Tuomisto-Bell has seen great professional success in his 20-plus year career. Perhaps best known for stylized male forms that offer a sense of familiarity to draw in viewers, he utilizes various patinas along with acrylic paint to create dynamic textures that interplay with the bronze itself. He exploits the perception of what bronze is as a material, making it more intriguing, while maintaining an artistic vision and expressive integrity.

“Existential themes, and the paradoxical relationships between violence, sexual identity and religion, have fascinated me and been my focus for years,” say Tuomisto Bell. “different ways to show this timely/historical material, bronze, to change how expressive it can be, and since I was originally a painting major as an undergrad, it seemed like a natural progression to paint the surface of my work.” 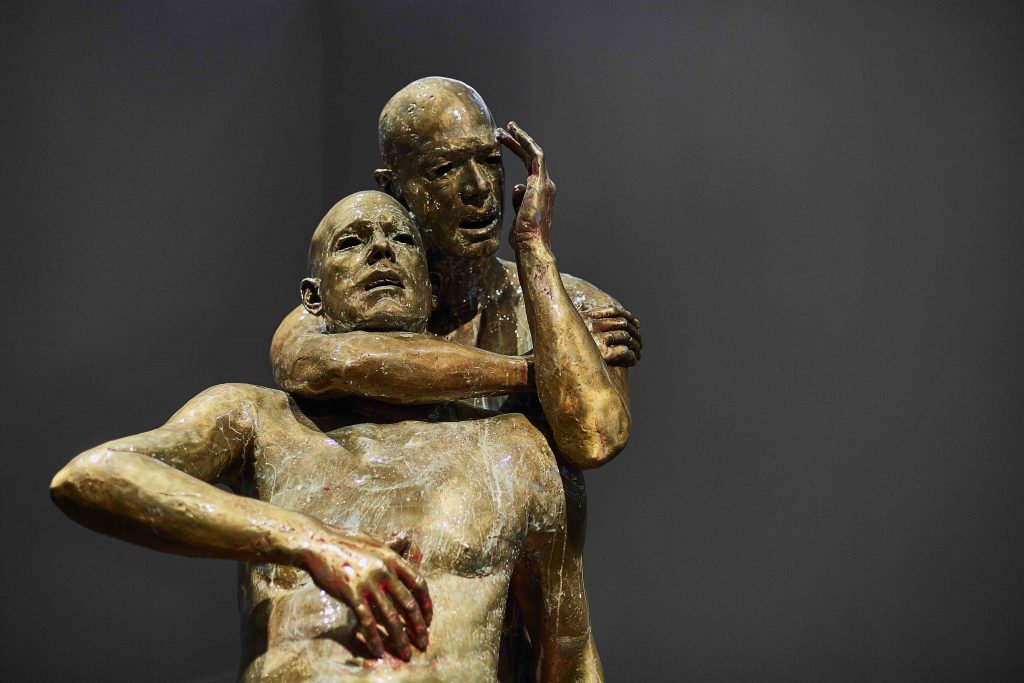 After more than 20 years experience with the lost wax method of casting and extensive time spent working in commercial art foundries, Tuomisto-Bell established his own Phoenix-based studio equipped with a complete range of tools and materials to cast and fabricate both commercial and personal work. Tuomisto-Bell Studio Foundry is a small full-service art foundry in the heart of Phoenix that he co-owns with his wife Julie and brother Christian Bell.

Throughout his career, Tuomisto-Bell has received numerous accolades for his sculpture, and his work can be found in many public and private collections nationwide, including Indiana, Utah, New Mexico, California, Colorado and Arizona. Over the years, Valley residents have had the opportunity to experience Tuomisto-Bell’s work first hand, both in exhibitions at various venues and in public art commissions. He has had the opportunity to exhibit at many prominent galleries and museums throughout the Southwest, including the Albuquerque Museum, Mesa Art Center, Phoenix Art Museum, Shemer Art Center, Scottsdale Museum of Contemporary Art, Tempe Center for the Arts and Tucson Museum of Art.

In 2010, he received a prestigious Contemporary Forum grant and had the opportunity to exhibit his work at Phoenix Art Museum. He was commissioned by Scottsdale Public Art (SPA) in 2015 to create his installation “A Little Slice of Heaven” for IN FLUX Cycle 5, which was installed in Scottsdale at the Pavilions at Talking Stick.

IN FLUX is a wonderful art initiative launched in 2010 by SPA to activate vacant storefronts throughout the Valley with site-specific temporary public art created by Arizona artists. For the installation, Tuomisto-Bell’s created 40 individual homesteads, complete with delicate eerily glowing wax heads that appear to be sleeping on grass within the picket fences. This poignant work examined the idea of the so-called American dream of owning a home. According to the artist, the piece “embodies the concept of American idealism as a quest for prosperity and peace juxtaposed with the complacency of the human condition.”

Tumisto-Bell had always wanted to pursue his Masters of Fine Art in sculpture, but the timing was never quite right. What ultimately led him back to ASU was the combining of all the MFA studios into one location, under the direction of Adriene Jenik, at Grant Street Studios in Phoenix’s warehouse district. This was ideal for creative inter-disciplinary interaction.

Led by the desire to “hone my own studio practices and learn how sculpture methodology had changed,” Tuomisto-Bell entered the MFA program a few years ago. Going on to say, “Technology has exploded in the last five-to-eight years with digital enlargement, robotic milling and modeling technologies, including 3D printing. ASU being a research university was perfect.” 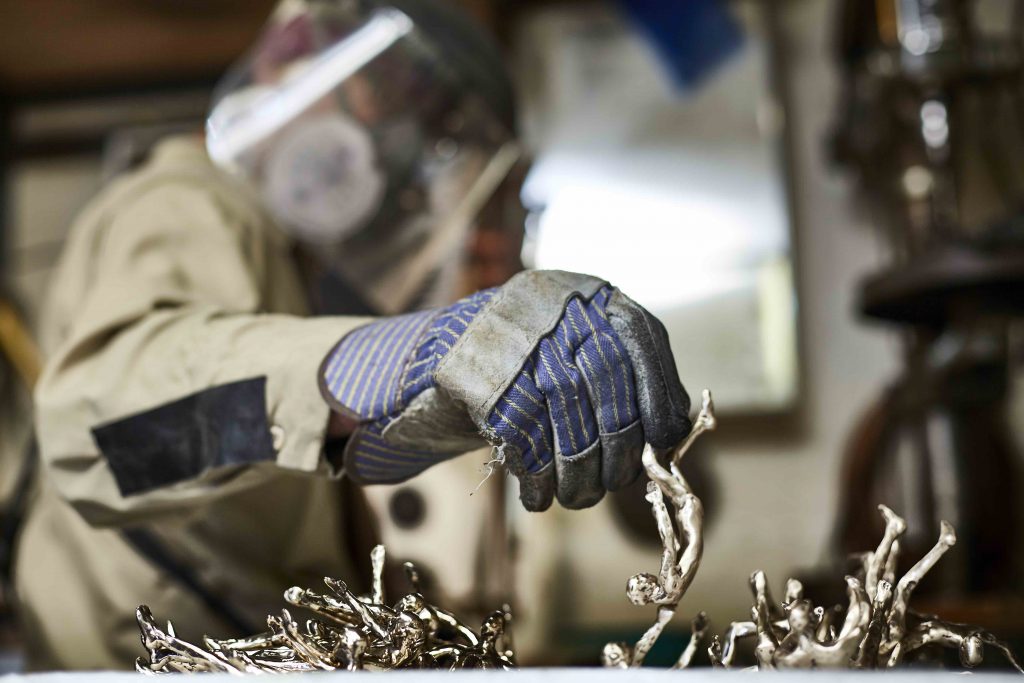 Going back to school at this juncture in his life and career “was quite difficult at first to balance work, family and school. Some things had to be sacrificed.” He went on to say that “with the backing of my wife Julie and by showing my kids that education is crucial to bettering oneself and one’s community, the sacrifices were worth the opportunities.”

With the recent completion of his MFA, Tumisto-Bell held his thesis exhibition entitled “Cause and Effect” in April at the ASU Step Gallery. It was inspired by what he is most passionate about, “mankind’s inability to cope with our violent nature, our bigoted attitudes toward people who are not like us, and how religion drives a lot of cultural institutions. These have always been talking points in my work and with the current political atmosphere over the last year, it seems I had found all the inspiration I needed.”

“Cause and Effect” included a captivating collection of bronze sculptures that centered on Tuomisto-Bell’s “Brothers” series, featuring powerful, emotive works that emphasize “the fraternal connection and my relationship with my own brother. This is brother-against-brother and becomes a broader metaphor for relationships and their outcomes on a global scale.” 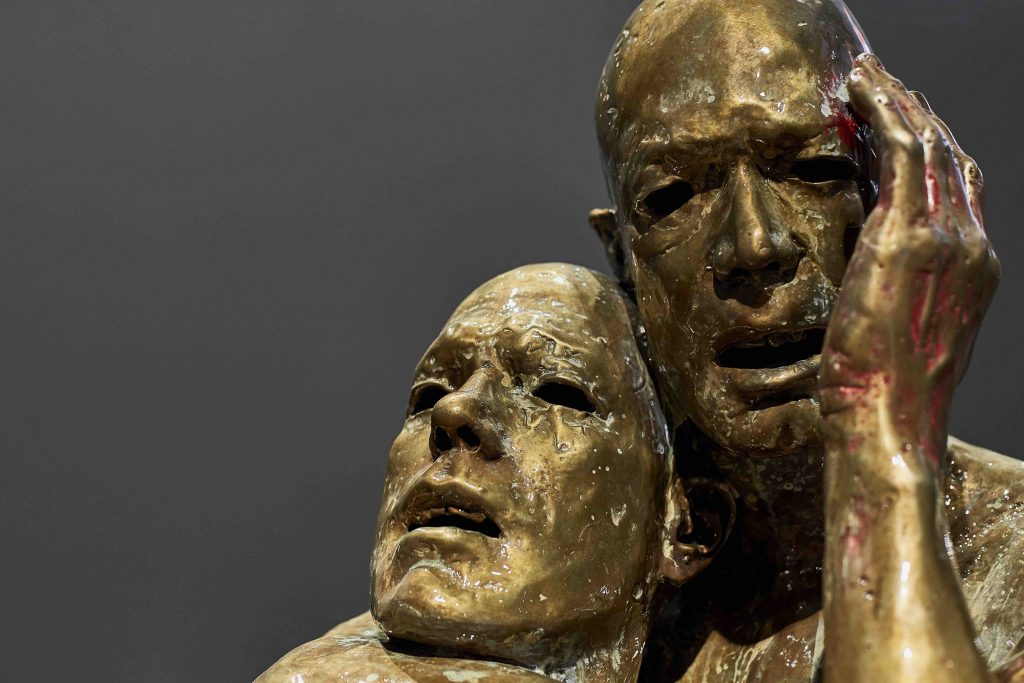 The series includes such provocative pieces as “Kiss,” depicting the two brothers engaged in an awkward embrace, and “Whisper,” showing the intimate yet childlike behavior of whispering into another’s ear, conjuring up childhood memories and emotions. The artist went on to elaborate about his sibling, “we have a positive-negative bond, and I believe relationships that inspire passion are relevant to global issues today.”

Also prominent throughout his work is the simplified male figure that represents the every man, “evoking emotion through gesture, position and relationship. The figure, because of its iconic nature and worldwide universal appeal, examines and reflects upon a personal genealogy.” This universality is evident throughout Tuomisto-Bell’s work and is seen in such pieces as “Monumental Head,” massive in scale, exuding energy, strength and dominance due to its placement upon a towering wood pillar.

The work is truly captivating because of both its ideas and execution, highlighting a command of the craft. Tuomisto-Bell continues to grow and develop, creating striking imagery that is expressive and engaging. Over the course of the last few years, while completing his MFA, Tumisto-Bell’s work has evolved. More specifically his art practice has altered and pushed toward a global scale. For Tuomisto-Bell’s work, it was very important “to make it accessible to not just local communities and patrons but internationally. This lead to how the ‘Crane Projects’ came about.”

In 2016 Tumisto-Bell was selected to produce one of three large-scale public works going into the massive Marina Heights Complex in downtown Tempe. He created the large installation “1,000 Cranes,” located in the stairwell of Building C and visible from the pathways along Tempe Town Lake. Tuomisto-Bell hand-folded then bronze cast 1,000 origami cranes for this delicate yet powerful installation. The cranes are suspended at various heights in the stairwell. “Paper cranes symbolize the fragility of life and world peace, while transferring them into a permanent long-lasting material represents the enduring power of the human spirit and hope for a lasting world peace.” 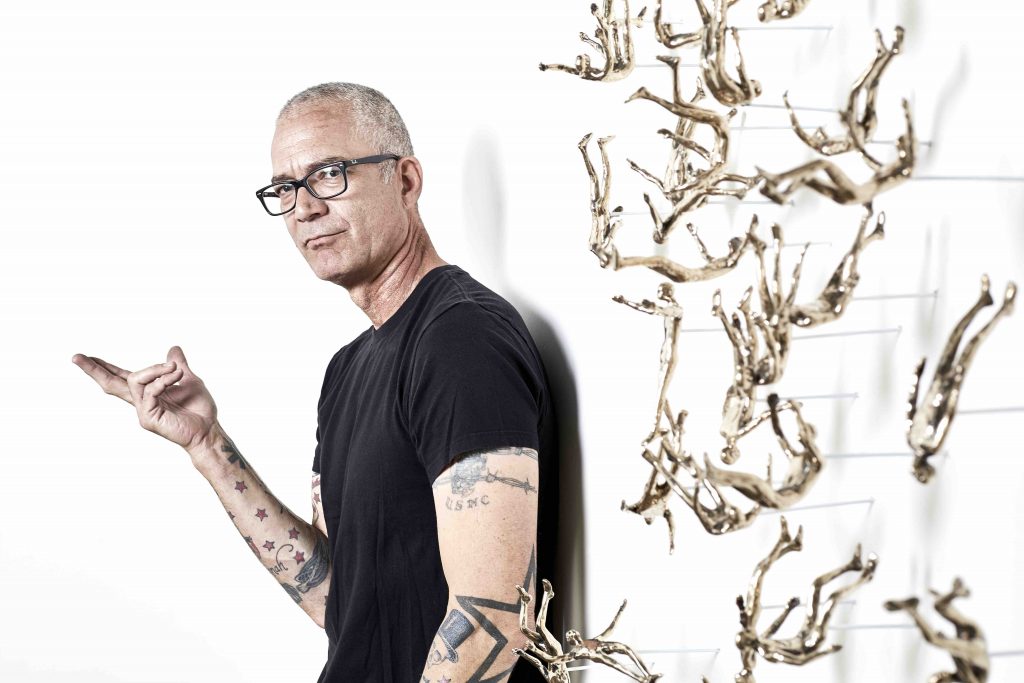 Tuomisto-Bell was led to this project as part of his journey during graduate school, which he said it helped him to think more internationally and work from a different perspective. “This piece speaks of reconciliation and hope for the future that is, from my perspective, a positive aspect of coming out of war and violence.”

Tuomisto-Bell’s daughter had taught English in Japan and stayed with a host family who worked at the Hiroshima Peace Museum, ultimately leading him to propose a similar work, “1000 Crane Peace Project.” He worked with Oshita-san (host mother and volunteer at the museum) and Japanese elementary school kids in Hiroshima, on the project. He went on to exhibit this stunning and formidable piece at the Hiroshima Peace Museum, and recently brought it to Arizona to display at ASU’s Gallery 100 this past November.

Next up, Tumisto-Bell plans to explore his “Brothers” series further. He feels there is more work to be done, referring to his original thesis plan that featured seven large-scale figures. His commercial business the Tuomisto-Bell Studio Foundry often does casting work for the famed Frank Lloyd Wright Foundation at Taliesin West and they are currently in the midst of planning some public demonstrations of bronze pouring that they hope to set for the fall. Tuomisto-Bell is also in talks with Cruz Gallery in Santa Fe about a new exhibition of his work with the date still to be determined. 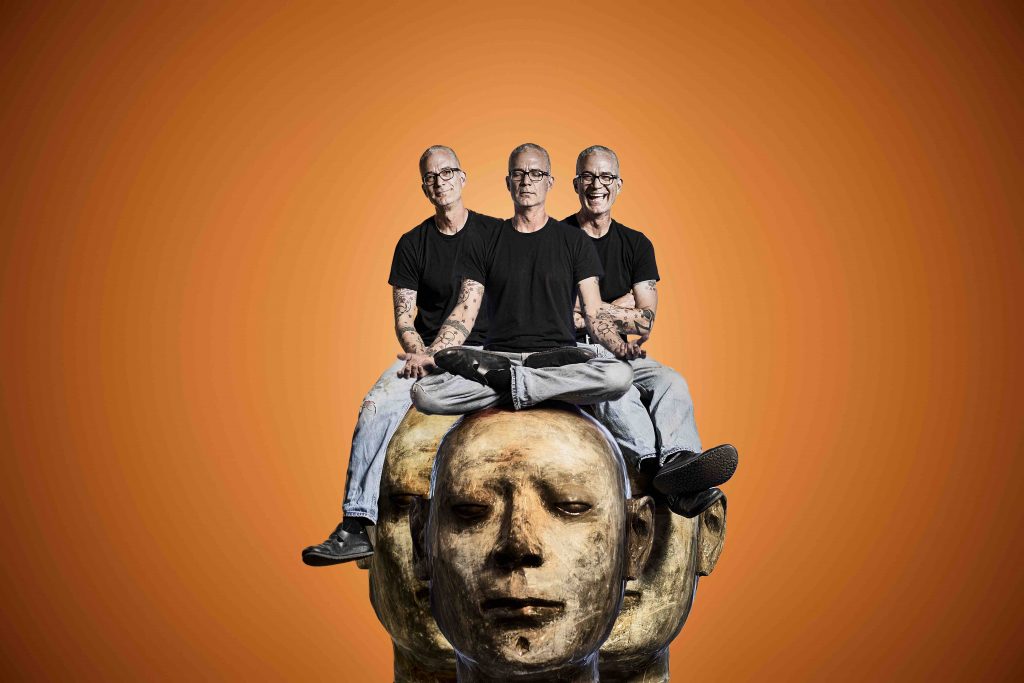