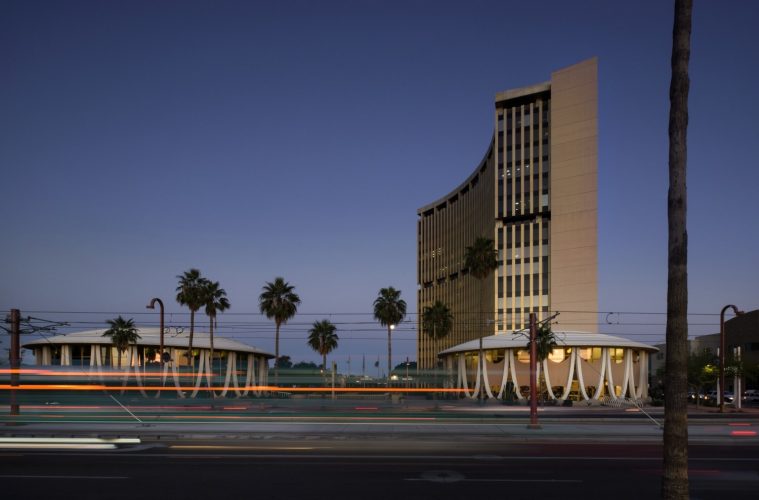 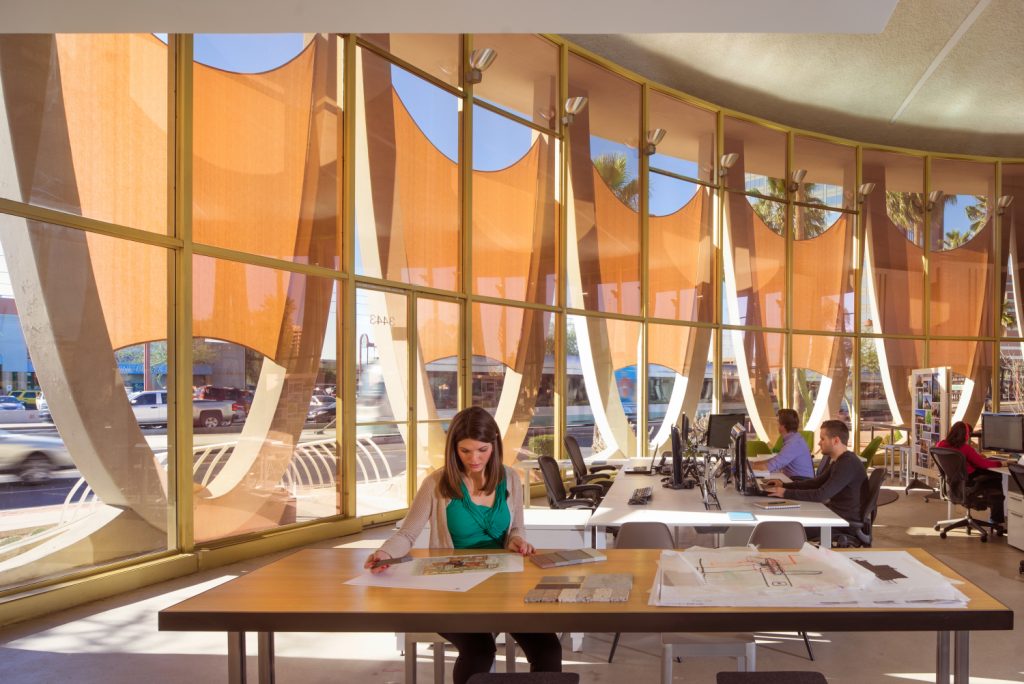 Shepley Bulfinch Phoenix Office/Studio (Phoenix Financial Center)
Founded in 1874 by renowned American architect Henry Hobson Richardson, Shepley Bulfinch is one of the oldest continuously practicing architectural firms in the nation. The 143-year-old company began a strategic geographic expansion in 2009 when they acquired merzproject, a small award-winning design studio based in Phoenix. This move established an Arizona office for the firm, which had previously operated only out of Boston.

Unbeknownst to many, one of the firm’s early historic buildings is right here in Phoenix—the Trinity Episcopal Cathedral (1921), in the Roosevelt Row District. The firm completed the earlier Trinity church campus in 1910, but the mission revival style cathedral, with its 60-foot bell tower, wasn’t added until 1920 and consecrated in April of 1921. After a major fire in the cathedral in 2002, Shepley Bulfinch was called upon to restore the original interior, some 80 years later. 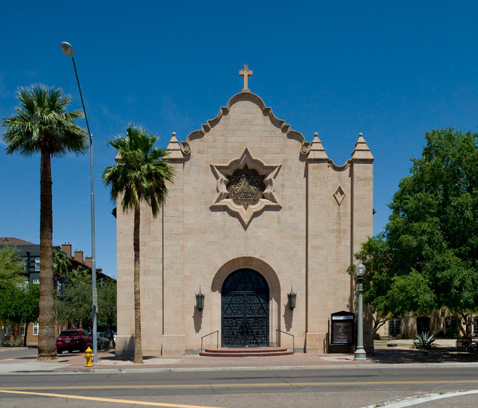 Trinity Cathedral
The firm has a strong affinity for the preservation and restoration of significant buildings. One recent example is their adaptive reuse of the south rotunda of the iconic mid-century Phoenix Financial Center (1964), which upon its completion in 2014 became Shepley Bulfinch’s AZ headquarters, housing the principals and a staff of nearly 40.

As if carrying the torch, Shepley Bulfinch went through in a very rigorous process to restore and update the 9,000-square-foot rotunda. Workers meticulously stripped back years of paint, stucco and dust to expose such delicate features as the dark cork veneer on the surfboard-shaped steps of the floating staircase. Gold anodized elevator doors are trimmed out in Carrara marble, and the glass pendant lamps were thankfully rescued from the basement and updated with high-efficiency lighting. The original bank vault, with its thick stainless-steel door, now houses an art gallery. 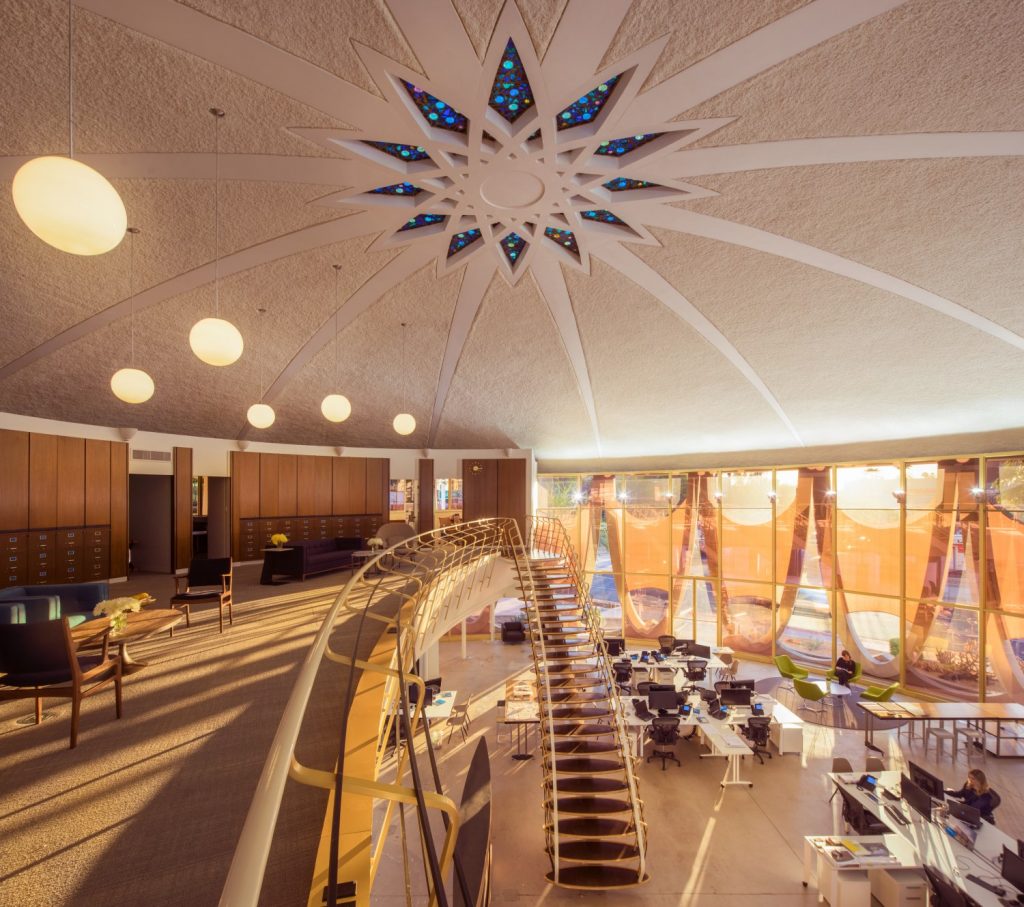 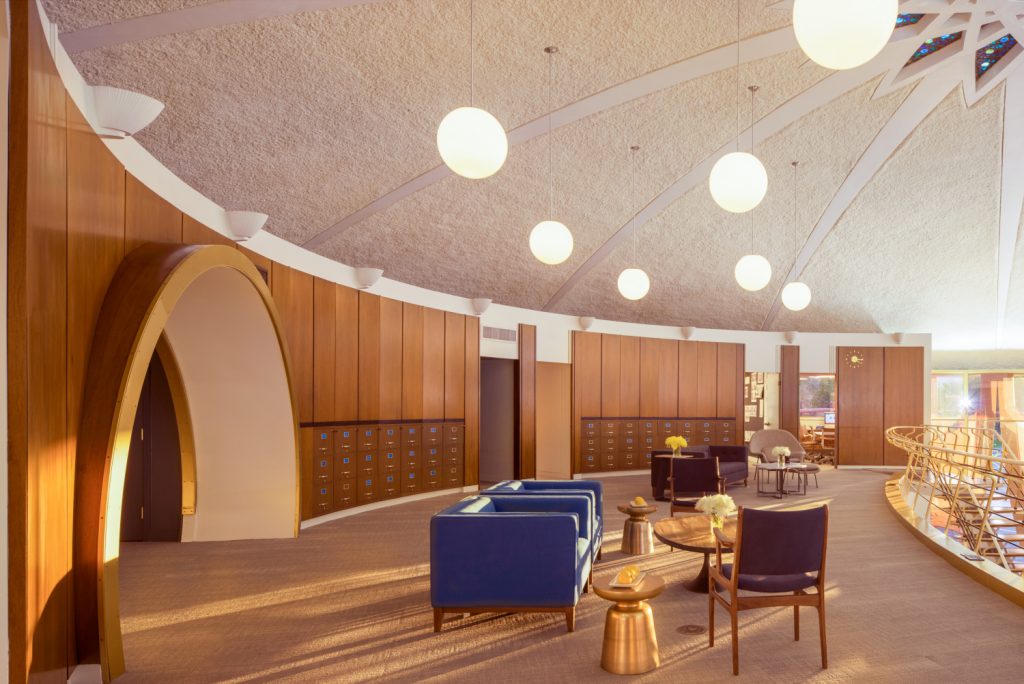 Shepley Bulfinch Phoenix Office/Studio
The project went on to win a highly coveted Interior Design magazine “Best of Year” award in 2015, for the category “Firm’s Own Office.” Shepley Bulfinch notes on its website, “The design creates a modern space that respects the existing structure, reintroducing lost elements in ways that distinguish old from new. In doing so, the studio balances the restoration of the original intent of Sarmiento’s design and a modern interpretation of the space for contemporary use. Iconic elements of the original design, many of which had been lost or badly altered, are now core features of the space.”

Other local projects include the enHance Park, a 47,000-square-foot residential infill project built from the ground up. The 179-unit complex takes advantage of a prime location on Phoenix’s 32-acre deck park, with proximity to many amenities in the walkable Roosevelt Row area, including restaurants, shops and galleries, as well as the nearby light rail. The project supports dynamic urban living modes, with a unique blend of unit types, including live-work spaces, flats, micro units and lofts. 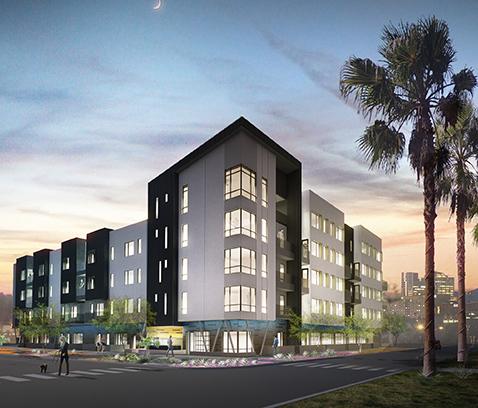 enHance Park Condominiums
In 2015 the firm continued its national expansion with the acquisition of Bailey Architects of Houston. Much of Shepley Bulfinch’s output is large civic projects, hospitals and university buildings that are scattered throughout the U.S., including the brand-new Health and Biomedical Sciences Building II (2017) at the University of Houston, comprising 300,000 square feet, and the New Central Library (2016) for the City of Austin.

Members of Shepley Bulfinch’s Phoenix branch answered JAVA’s questions about the history and future of the firm. 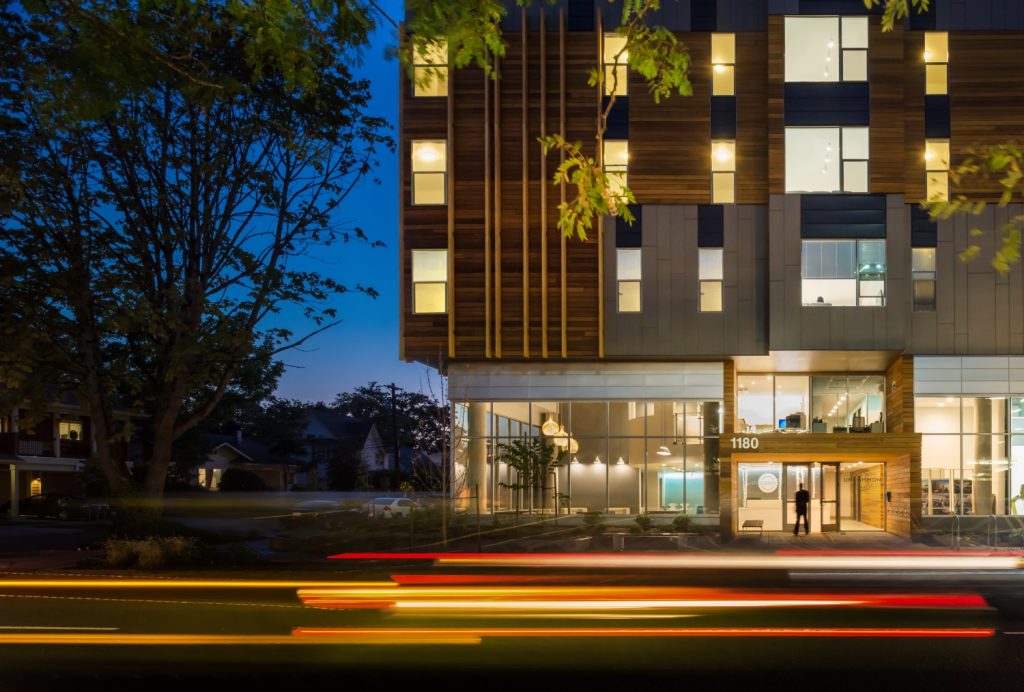 Uncommon Student Housing, Eugene, Oregon
Since setting up shop in the Phoenix Financial Center, what sort of new projects have been awarded?
The Phoenix office has grown from an initial staff of 7 to a current staff of 35 and growing. Projects have grown from residential buildings to those of much greater scale and complexity. Our current projects include the design of a 400,000-square-foot hospital tower in Tucson for Banner Health Systems, a student housing complex in Tempe, the renovation and addition to the College of Pharmacy at the University of Arizona, projects for Mayo Clinic and a large residential complex in downtown Phoenix that will be among the tallest buildings on the skyline. One current project that we’re particularly excited about is the renovation of the After Hours Building, which was one of our earliest projects and the first building in what was then the newly created Transit Overlay District.

With principals and a full staff now here in the desert, has this climate allowed for any new approaches in your R&D, innovation, etc.?
Keep in mind it wasn’t that Shepley Bulfinch was transported to Phoenix. We are a culture that was born from the desert as merzproject, and nine years later we’re continuing to teach our colleagues across the firm how to design in and for the desert.

Because many of your projects involve health care and education, does that set an expectation of thinking about tomorrow’s advances? What type of collaboration is required with those industries to ensure your building methods are aligned with those sectors and their demands?
Yes, absolutely. We are always learning, researching and pushing our clients to plan for the future. Members of our firm have a great deal of expertise, having worked in their respective industries for decades—whether it’s pediatrics, complex science buildings or mixed-use buildings on dense urban sites with zoning complexities. We are deeply involved in the conversation about what’s going to happen next. 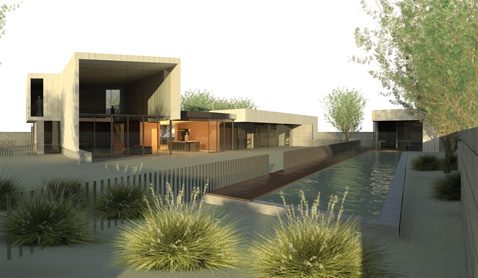 Hoover House
We had the opportunity to walk the Hoover House. Knowing the home is located in an enclave of mid-century residences, how is respect for historical context factored into a project like this? What attributes did you strive to add?
The Hoover House is a project that was part of the merz portfolio prior to being acquired by Shepley Bulfinch. It was a great opportunity to work on a contemporary addition to an historic neighborhood, similar to our renovation of Phoenix Financial Center, where our offices are located.
The Phoenix Financial Center, with its iconic tower and rotundas, was designed by Peruvian-born architect W.A. Sarmiento and completed in 1964. In renovating and restoring the space we worked to clean up and enhance a handful of its most elemental experiences. It was never intended for 40 to 50 people to work in the space, so we designed it to be used in a completely different way than the original bank. How we are maintaining the “elemental-ness” while making it a “home” for lots of people in 2017 makes this building as much ours as Sarmiento’s. 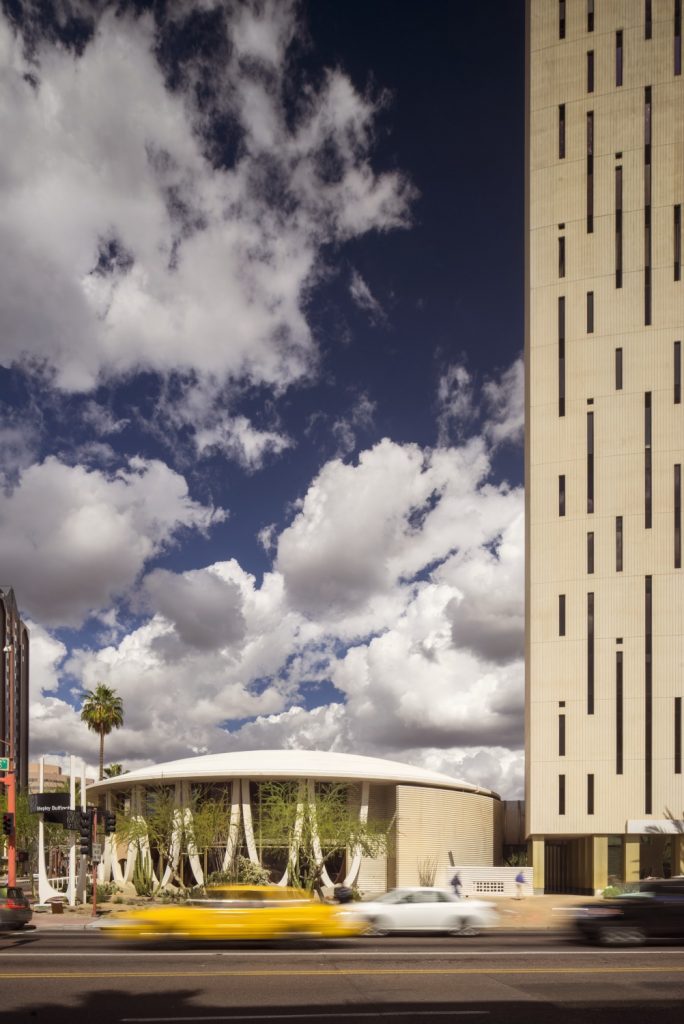 Phoenix Financial Center
What forward-thinking concepts and ideas would you like to share with our readers?
We are committed to Phoenix and its growth and want to make a positive contribution to the city. We would like to help develop the community. As such, we’ve used our office space as a “living room” of sorts while partnering with community leaders like Modern Phoenix, DOCOMOMO and Reinvent Phoenix to host various events.

We get involved in our communities. One recent example was an urban design “hackathon” we participated in to redesign the in-between space bordering two recently revitalized Boston neighborhoods, which was sponsored by the Design Museum of Boston.

Shepley Bulfinch is very forward thinking and always exploring how to push the boundaries of design and innovation. This past year, we finished a laboratory building for start-ups that was designed and built utilizing modular construction techniques, unprecedented for a such a laboratory. Biophilic design is at the core of our work, and we feel strongly that all of our designs should support physical and psychological well-being. 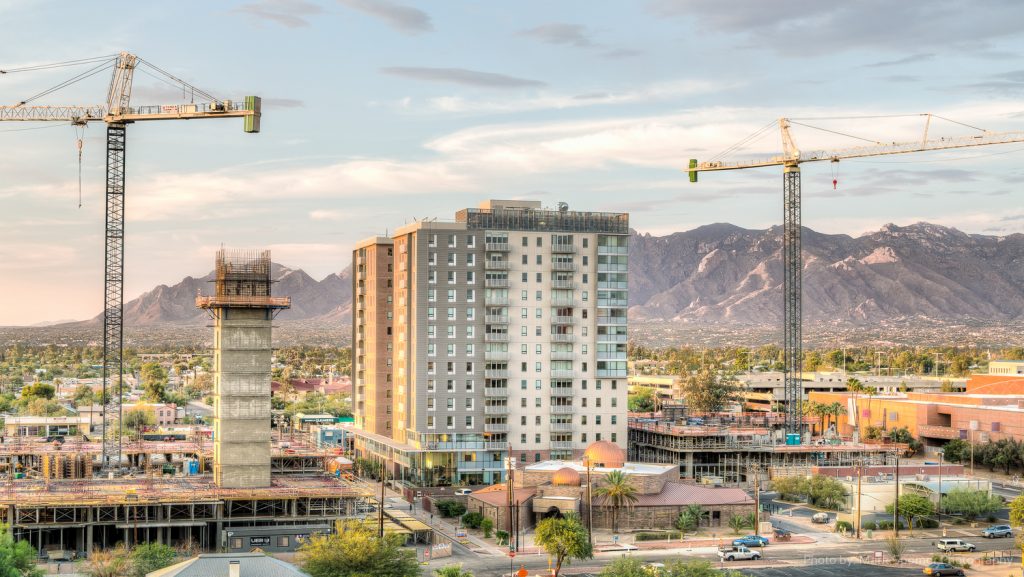