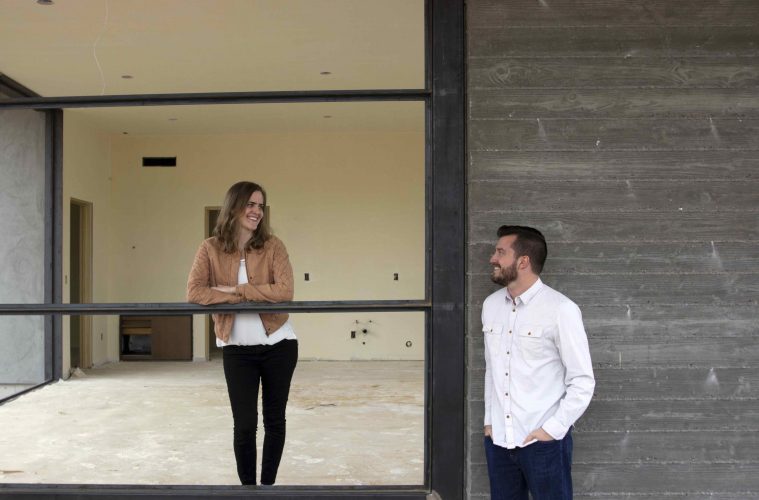 Claire and Cavin Costello: 10 Years of Design at the Ranch Mine

It’s not often you hear a story like that of Claire and Cavin Costello outside of fiction. The pair met on Cavin’s first day in Arizona, bought a house together shortly thereafter, and then started their architecture firm, the Ranch Mine, in 2009 at the nadir of the economic recession. Ten years on, they’re happily married, have recently welcomed a new addition to their family, and have a thriving business. It’s like a fairy tale, and yet reducing it to a trope glosses over all the work it took to get where they are today.

Cavin Costello began his journey in Connecticut. The son of a civil engineer, he can trace his initial exposure to architecture to his father. “He actually designed the house I grew up in, and [my parents] still live in it today. Literally, the plans of our house were on the wall.”

Outside of a love of building with LEGOs as a kid, Cavin’s interest in the field lay dormant for years. After acing a ninth-grade algebra test involving proofs, his teacher took him aside, saying this is the kind of math architects do, and that he should consider becoming one. This ultimately led to his pursuit of the field in college – a hefty commitment involving six years of school, three years of work experience, and all the accompanying licenses.

At the end of his studies, Cavin was ready for a change of scene. “The built environment [in Connecticut and Boston] was largely done,” he says. “They’d been building in a European style for three, four hundred years, so a lot of it was very conservative in terms of how they do stuff – not much experimentation. Then I had a professor who had gone to ASU and worked with a very well known architect, and he said I should look into what these guys are doing out in Phoenix.”

The professor was referring to Phoenician architects Wendell Burnette and Will Bruder (and Rick Joy in Tucson). “I looked at their work and it was almost alien to me from where I grew up, but super exciting in that they were basically creating [a new] architecture for the desert.” The possibilities of architecture in Arizona led him to move to Phoenix sight unseen upon completion of his master’s program at Northeastern University in Boston.

Coincidentally, Claire was also moving to Phoenix – although for her, as a native of the city, this was a return trip. Having received degrees in English and Communication from the University of Colorado at Boulder, she made the move back with some reluctance.

“Really, the only thing that brought me back was my family,” she says. “I was pretty apprehensive of Phoenix as a city at the time.” Over the years since her return, however, she’s grown to be happy she came back – and not just for the obvious reasons. “It is starting to feel like a real city to me with extending the light rail, adding density. And I do think there is a significantly raised awareness of local artists, restaurateurs, shops, etc., compared to when I was growing up here.”

Regarding the decision to purchase a house and start a business together so early on in their relationship, Cavin admits, “Most people thought it was a terrible decision.” It’s clear neither he nor Claire was acting as rashly as their actions might suggest. “We had both been trying to enter the work force at an incredible economic low point, which had its challenges,” says Claire.

With the housing market among the industries hardest hit, architecture firms were having to let their existing employees go, but would hire them back before bringing on any new or unknown candidates as the economy rebounded. For Cavin that meant, not only were they not hiring, but they wouldn’t be hiring for years.

In the face of all this, it seemed natural for Claire and Cavin to make their own way. “I always thought I’d work for myself, have variety in my days, and really take ownership of what I was putting my time into,” says Claire. “At the time, it seemed easier to show up for ourselves every day and put in hard work rather than continue exhausting the job search.”

The couple named their business the Ranch Mine for several reasons, one of which is Cavin’s dislike of the more conventional. “We didn’t want to be Costello Architects or Costello Studio, because everyone’s name is sort of like that. I like the idea of a company being a company and not like, ‘I’m a star, and these are the people that work for me.’”

Then, there was the exploration of their surroundings. “In that early stretch of knowing each other,” recalls Claire, “we took day trips around the state and talked about what we found interesting in Arizona, including old mines.” Finally, the name settled in and took hold when the state’s history extended into metaphor. “We were working on our house,” Cavin explains, “which is a ranch house, and we were in there chipping away, trying to find the gems of the beauty within this terrible, foreclosed ranch house, and we’re like, ‘That’s kind of a fun way to think about it, we’re mining this house,’ and that’s where we came up with the idea.”

The Ranch Mine first entered the public eye when the Arizona Republicran a story on the bathroom renovation they undertook in the house that inspired their name, when the publication featured cost-conscious ways to improve your home. Ten years later, their work has received a number of awards, been featured in local and national architecture and lifestyle publications, and appeared on network television. In 2019, they were named both editor’s and people’s choice for HGTV’s Designer of the Year in the “Before and After” category.

One recent project that caught a lot of attention is Canal House, an infill property off 12th Street between Glendale and Northern. When asked what they consider when bringing their distinct style to a neighborhood, Cavin replies, “We like to draw inspiration locally. Where we are in the world has a really large effect on us, including our everyday surroundings. So if you can create [structures] that seem more rooted in their place, peoplefeel more rooted too.”

That doesn’t mean they let the existing real estate dictate their design. “We study the neighborhood, and what we’re really looking for is something that was purposefully designed, with character developed over time. Those are the areas where it’s like, ‘Okay, let’s put something here that we think is more grounded in this space.’”

They are always thinking about climate and sustainability – creating environmentally conscious builds. Canal House incorporates windows facing north and south for energy efficiency, desert landscaping for water conservation, and many other thoughtful elements. Cavin notes that this environmentally conscious approach to architecture goes back to those formative years with his dad. “He designed our home in the early eighties after the energy crisis, and was very into sustainable design – way before it was called green building.”

A focus on sustainable design and sense of place is very important to Claire as well. “There is a children’s book, The Big Orange Splot[by Daniel Pinkwater], that mirrors the sentiment we’d like to see our work have in its environment. To quote the book, ‘My house is me and I am it. My house is where I like to be and looks like all my dreams.’” Claire also expresses her thoughts on architecture as an art form. “We are constantly connected to and influenced by art in our work, and feel that architecture and creative culture are inextricably linked. It is our hope that our work continues to push for self-expression and self-exploration while embracing the beauty of our differences.”

The Costellos have seen a lot of change in the industry in the decade since they started the Ranch Mine – much of which has been driven by overall changes in Phoenix itself. “The largest shift we’ve seen,” says Cavin, “is that people want to be here. People are staying here because it’s a great place to be.” He believes this change has in large part been born out of that time of economic hardship. “The recession reset the dial in Phoenix, and people thought more about what they wanted [for the city],” he says.

Claire echoes her husband’s thoughts on the matter, noting the impact of that focus on their work. “People are really being intentional with the spaces that are important to them at home. Whether it is for crafts, entertaining, or enjoyment of the outdoors, we get to create really interesting spaces that cater to the wide variety of homeowners and the specifics of their everyday lives.”

The Ranch Mine’s success has allowed the Costellos the enviable position of being able to work on what matters most to them. “You don’t have to take on projects just to keep the doors open,” says Cavin. “You’re doing the work you want to do. That is our goal from day one of any project – to do work that in twenty, thirty years will still make us proud.” Cavin notes that this is important in a world where the journey from design to completion takes a fair amount of time. He notes, “It’s a difficult industry, because what you’re excited about now, you might not see built for a number of years.”

It’s clear, though, from his overall outlook, that his perspective is not one of lament. “It’s funny, when you study architecture, most architects don’t become who they are until they’re fifty, sixty, seventy years old – Frank Lloyd Wright was [almost] seventy when he moved out here, and he was doing some of his best work. So I’m looking at this as a fifty-year proposition.”