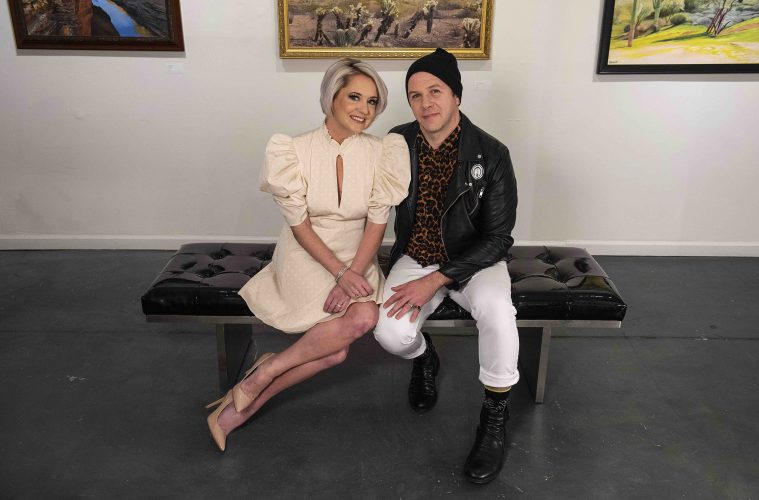 Carrie Beth and Sean McGarry from {9} The Gallery

Carrie Beth and Sean McGarry both grew up just outside Buffalo, New York. They met in high school and even played husband-and-wife partners in the musical Anything Goes.Carrie Beth played one of Reno’s “Angels” and Sean was a singing sailor. Sean thought Carrie Beth was out of his league, and she was equally as impressed by him. But that’s where it ended. Their actual romantic involvement would not happen until years later.

After high school, Sean went on to study organic chemistry in college, eventually dropping out when he realized it wasn’t his passion. But during those first college years, he took an elective art history course that really interested him. That course would stick in his mind, and he ended up going back to Buffalo State College to study art history, criticism, and conservation. After living in Chicago for a few years, Sean followed the path of his family and moved to the sunny state of Arizona in 2010.

When Carrie Beth graduated from high school, she planned to go to college to study classical piano performance. She had been playing from the time she was three years old, and it seemed only natural to continue with a degree in music. But like Sean, Carrie Beth found her passions to be elsewhere. Although staying in the arts, she switched her undergraduate major to musical theater with a dance minor. She went on to travel with a theater group but veered toward the management side rather than performance. She continued her studies and received a Master’s in Arts Management from the University at Buffalo.

The couple tell a funny story about meeting up 15 years after graduating from high school. Sean, while living in Arizona, was invited to be the best man at a wedding in Buffalo. On a whim, he connected with Carrie Beth via Facebook and asked her to meet up for a drink. It turned out to be much more than a first date, though, as she unknowingly became his plus-one at the wedding. They’ve been attached ever since.

Carrie Beth moved with Sean back to Arizona. They eloped somewhere off the freeway between Sedona and Phoenix, where the only notary they could find to sign the marriage paperwork was at a local jail. As their marriage evolved, so did a unique artistic partnership. Their first collaborative artistic project (unless you go back to their high school musical days) was a Millennium Falcon “guardian angel” for their daughter’s bedroom (which, the couple says, is still in her room). Then, together, they formed the artistic endeavor FunWOW.

FunWOW was inspired by a page in a kid’s book by Buffalo artist Mark Freeland. In a thought bubble above an illustration of himself, the writer was expressing sarcasm over the chemotherapy treatments he had been on while fighting cancer. The name FunWOW also came about as the couple needed a single name for their art submission to decorate a recycling bin at the Coachella Music Festival. (The concert, by the way, was reported in 2017 to produce 107 tons of waste each day.) FunWOW, for the fifth year, will contribute a recycling bin design for Coachella 2020.

In another collaboration, and what has become their focus, the couple acquired {9} The Gallery from founder Laura Dragon in early 2018. About a year before, Dragon had been diagnosed with cancer and needed help running the space. She transformed the gallery into an artists cooperative, and Carrie Beth became a member under the FunWOW moniker. After the purchase, Carrie Beth and Sean kept the name {9} The Gallery but eventually changed the business model from a cooperative to a more traditional gallery, striving to show a wide variety of work from local artists.

But the McGarrys have taken a different approach than many galleries in terms of choosing the type of work to show. Instead of sticking to one “genre” or a selected group of artists, they’ve simply chosen to exhibit art that, in their words, is of “extraordinary quality” that will “hold up over time.” At {9} The Gallery, you might find realism, pop art, period landscapes, watercolors, abstract painting, and sculpture, among other classifications.

The art they show is also defined by what they have access to, which typically means work created by unrepresented local artists. Sean wants to democratize the art scene here in Phoenix by not excluding anyone by age, style, or medium. They’ve even shown costume designs by artist Irene Marie aka Weezy’s Playhouse, and the gallery showcases more practical art, like clothing, furniture, and jewelry, in its back space. For now, at least, they just want to “show great work,” Sean says. “Greatness can come from anywhere,” he says.

Carrie Beth and Sean aim to support artists in ways beyond getting their work sold, though. One way they have embraced the idea of contributing to artists’ growth is by hosting artist-run critiques. These are supportive events in which artists present work that has inspired them, along with what they produced as a result. The atmosphere is friendly and constructive, much like art school, except without the harsh critiques. So far, there have been about a half dozen of the events; they’ve included local artists such as Jillian Bennett, Henry Bosak, and Antoinette Cauley, to name a few.

Sean points out that support for artists can also mean providing supplies, offering studio space, or buying advertising for artists to keep them thinking forward. Both curators embrace the idea of helping artists with the business aspect of their careers. For many artists, it’s a struggle to be creative, entrepreneurial, and business savvy all at the same time.

Carrie Beth wants artists to focus on making great work and to let her do all the marketing. Parallel to her role, Sean hopes to be the middleman between artist and art collector, therefore lessening the burden on the artist. His suggestion to artists, or anyone for that matter, is to not negotiate for yourself, as there’s too much of an emotional attachment. With these skillsets, the pair make a great art management team.

As far as their business partnership and how they complement one another, Sean is more engaged with the artists and focused on the art shown at the gallery, while Carrie Beth takes care of the bookkeeping, management, and marketing. She says her favorite time of the month is when she can pay the artists they represent. Her interest in the things that happen behind the scenes is reminiscent of the move she made away from the stage earlier in her career. And she seems to have no problem letting Sean have the spotlight.

When asked about the Phoenix art scene, the McGarrys are not only optimistic but excited about where it can go. “There is tremendous opportunity in Phoenix to expand,” says Sean. He’s talking about what many artists and art supporters have talked about for years: putting Phoenix on the map (the global art map, that is). The couple sees it as their job to take the Phoenix art scene and push it beyond the state’s boundaries.

But is the Phoenix art scene big enough or even ready to become a destination for art collectors? The two believe it is. Sean doesn’t think the Phoenix art community is behind, but rather the art market, for not recognizing what’s here. He has his eye focused on proving that point, and one way the couple looks beyond Arizona is by selling artwork online through social media and websites like Artsy.

Carrie Beth and Sean talk about how artists can live in a lower-pressure environment here in Phoenix. There is certainly a lot of open space, not only physical but also in terms of creative and immaterial space. Artists can pay lower rents and experience less stress than in some of the larger and more expensive cities. The lower cost of living can equate to more time to focus on being creative, and sometimes time is exactly what artists need. There is also more room to make mistakes, which Carrie Beth believes can be part of making successful artwork. “Artists can take risks here,” she says.

What’s up next for Carrie Beth, Sean, and {9} The Gallery?

For Art Detour 2020, which takes place between Thursday, March 19, and Monday, March 23, Carrie Beth and Sean plan to compile some of their favorite work from the last two years at {9} The Gallery. With the wide range of artists and artwork they’ve shown, it will be interesting to see how the show is curated and how the work is exhibited in the space.

The couple also plans to continue expanding the gallery’s reach both statewide and nationally, finding the right markets for the artists they represent, and supporting their work by helping them further develop their artistic efforts.