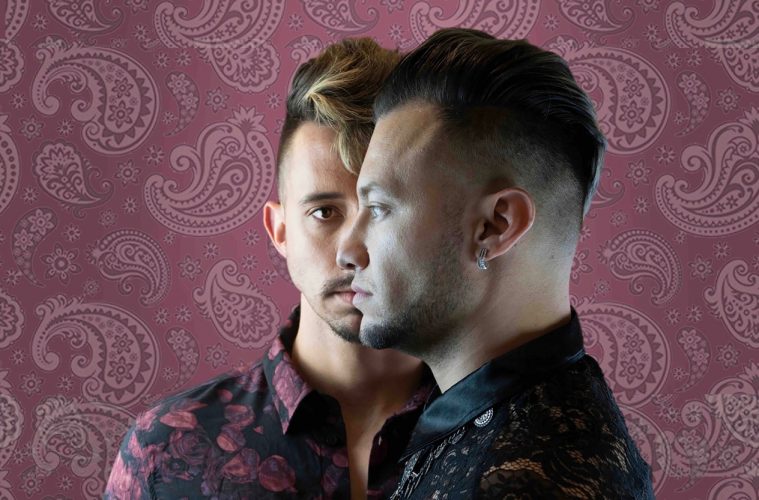 Angel Castro moves like he fully inhabits his body. He has to. It’s literally his job to know what he looks like. It’s what he does for a living and what he does for love and artistic expression. Angel is a dancer, choreographer, and founder of a dance company called the HALO Movement Collective. He’s also the company’s artistic director.

Angel’s mission is to tell stories and create moods by melding dancers’ movements with fashion. He creates opportunities for his audience to work through thoughts and feelings they might not be able to access through other mediums. In other words, Angel’s business is to understand the ways that the form and line of dancers’ bodies communicate. But he didn’t plan to be a choreographer.

From a young age, Angel had been acting in musical theater. He didn’t start dancing until he was a senior at South Mountain High, a dance magnet school. But he quickly became good enough to audition and to be accepted into the ASU School of Dance, where he later earned a BFA.

“I just wanted to dance. I was so against anything else. I didn’t want any part of creating the work or being responsible for a company,” he said. But his senior transition project required him to research a city to move to and develop a plan for establishing a dance company – even if that wasn’t the career path he thought he wanted.

“So I looked all around and realized that if I had to open a dance company, I wanted to do it in Arizona.” That realization led to a project he worked on with his mother, Cristina Castro, who had been a fashion designer. Angel designed costumes for each of the six dancers in his project. Cristina used her training to help Angel sew costumes that looked beautiful and could stand up to the rigors of a dance performance.

“To me, what a dancer looks like is as important as what the body is doing. I notice what the dancer is wearing and how that looks when they move,” he said. “All of that is a part of the story I’m telling. It’s all part of the mood and the experience the audience will have.”

Even though he was convinced about the strength of his ideas for making the costumes part of the dancer’s role, he wasn’t sure how the work would be received. “After that first show, I heard the applause and I knew that I’d connected with the audience. I’d shown them something they could relate to, and I thought, ‘This is what I should be doing,’” he said.

Angel casts that same eye for detail over every element of the HALO Movement Collective’s shows. He is keenly aware of the fact that most dancers need a “day job” in order to practice their art. “When I create a show, my first concern is for the dancers. Instead of spending lots of money on sets or a bunch of lighting and technicians, I budget the dancers’ pay right at the start,” he said.

This approach creates a bond of trust between him and his dancers and makes him a stronger choreographer and artistic director.

“If your choreography isn’t strong enough to stand on its own, without [lighting tricks] or fancy sets, then you aren’t doing your job,” Angel said. His dance pieces use sparse scenery and minimal lighting effects, to ensure that those things don’t distract from the expressive choreography.

“I’ll sew the costumes, build the sets, whatever it takes. I learned how to take photographs for social media, and I even shoot and edit video,” he says. This DYI attitude also makes Angel a jack-of-all-trades who benefits from having a partner who understands the demands of his work.

Angel’s partner, Cameron Lucas Eggers, is quick to agree. “That’s why he has such a broad set of skills,” said Cameron, who is also a dancer. “In other companies, that same spirit is not there.”

Angel is very driven and often toils late into the night on his highly personal works. “I have such great support [in Cameron]. He’s there with me, helping with the sets and the costumes or whatever I need,” Angel said.

Cameron’s skills came in handy recently when set pieces for their upcoming show arrived. They’d rented a geodesic dome that had been used at Burning Man. The dome came in dozens of pieces, with minimal instructions for assembly. “It reminded me of those IKEA instructions,” said Cameron. “I’ve done a lot of IKEA, so it was easy for me.”

He had the dome assembled in just a couple of hours, safe and ready for the dancers’ rehearsals. Cameron prefers his role in the company as support for Angel. He isn’t an official member of HALO, but takes a lot of classes with the dancers. He and Angel were once featured in a duet for Scorpius Dance Theatre, where they both perform.

“A lot of couples do duets together and it’s a great experience,” Angel said. They smiled at each other, then Cameron finished Angel’s sentence. “But it was a lot.” They’re both happier being life partners rather than working as professional dance partners. A part of that reason may be because Angel’s work is so autobiographical.

“Before Cameron, I’d been in a bad relationship, and it left me in a dark place for a while. During that time, I spent three days in a room alone, exploring what was in my mind. We’re all so scared of mourning that we avoid it. But you have to go into the dark place to get out of the darkness. I put a time limit on it and did it, so now I’m fine,” Angel said. His experience of learning how to manage those feelings formed the basis of his past two shows, “Cell” and “Exile.”

“Those shows were three years in the making,” Angel said. People who’ve seen “Cell” and “Exile” will find familiar concepts and themes in his new show, “Rest in the Mourning.” All sixteen members of the company are in the new production, and they each play different aspects of the same person – all based on Angel himself.

“This feels like the completion of that period in my life,” he said. “I’m not sad anymore, so this show has to have some resolution.” Although he has specific events and feelings in mind when he creates and directs a show, Angel wants his audience to feel free to view it through the filter of their own lives.

“Not everybody understands the language of dance movements, but they don’t have to. I’ve gotten really good at creating a mood,” he said. “My work is open-ended so people can each have their own experience.” For “Exile,” he asked five of his dancers to contribute a story about a time in their lives when they felt isolated. Each wrote a dialogue, and then all five monologues were delivered at once, with words and stories told in layers that overlapped and intertwined.

“Audience members might hang on to one word, or they might hear a whole sentence,” Cameron said. Angel believes that the choice to have five dancers talk at once allowed for something almost spiritual and healing in the air. “The stories were really personal and raw. I knew theat people would hear the specific words they were meant to hear,” said Angel.

“HALO makes you search for abandonment. It can be mentally exhausting for the dancers, but they trust me and are willing to do that work,” said Angel.

They were also willing to take an impromptu road trip to make promo material for the new show. Angel knew the Glamis Sand Dunes would make the perfect backdrop for a video introducing the themes in “Rest in the Mourning.” So he and four of the dancers, including the lead character, packed their costumes, hopped in a car, and drove six hours to the location.

“When we got there, we still had to walk 45 minutes to get to the place I wanted to shoot,” Angel said. They were carrying the pieces needed to build a temporary set inspired by the dome that they’ll use in the performance. “That speaks to their passion and trust in me. They know that I play to their strengths, and they’re aware of my self-sacrifice to make sure everything’s right.” You can see the gorgeous, haunting video on the HALO website, www.halomovementcollective.com.

Then see the show on February 15 at the Broadway Recreation Center in Mesa. The unusual venue is a result of Angel’s insistence on making the show pay for itself. Cameron and Angel will be rebuilding the dome inside the recreation center on Valentine’s Day, the night before the show. Angel also decided to do three shows in one day instead of incurring rental costs for another day. There’s a student matinee scheduled, along with two evening shows for the public at 7 and 9 p.m.

“We all talked about it and made the decision together. It’s harder on the dancers to do three shows in one day, but they make more money this way,” Angel said. Spoken like a man who’s become very comfortable, and very good, in the director’s role that he never thought he wanted to play.