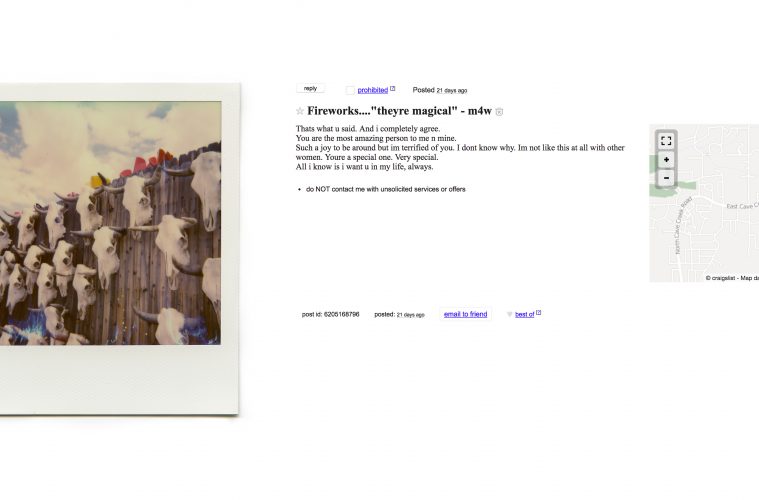 Kit Abate “Where We Once Were” 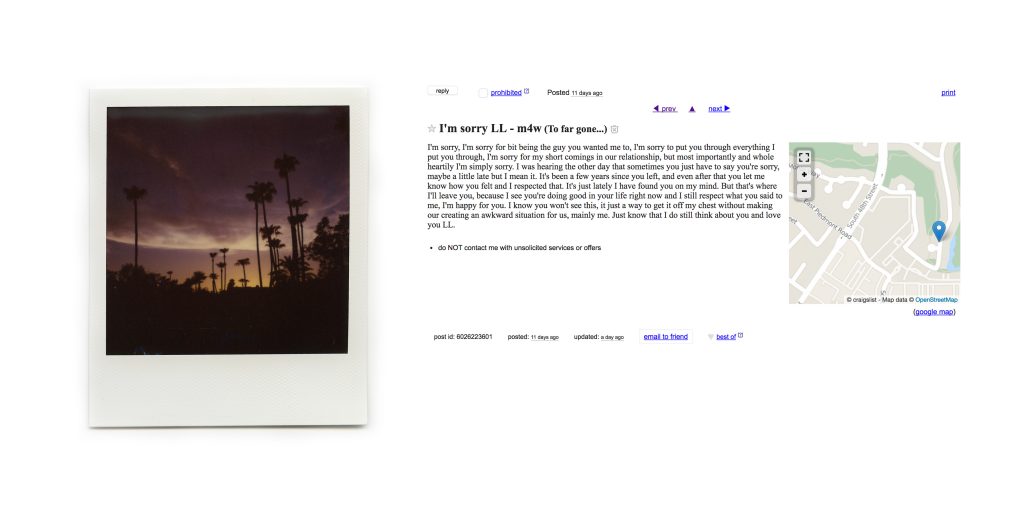 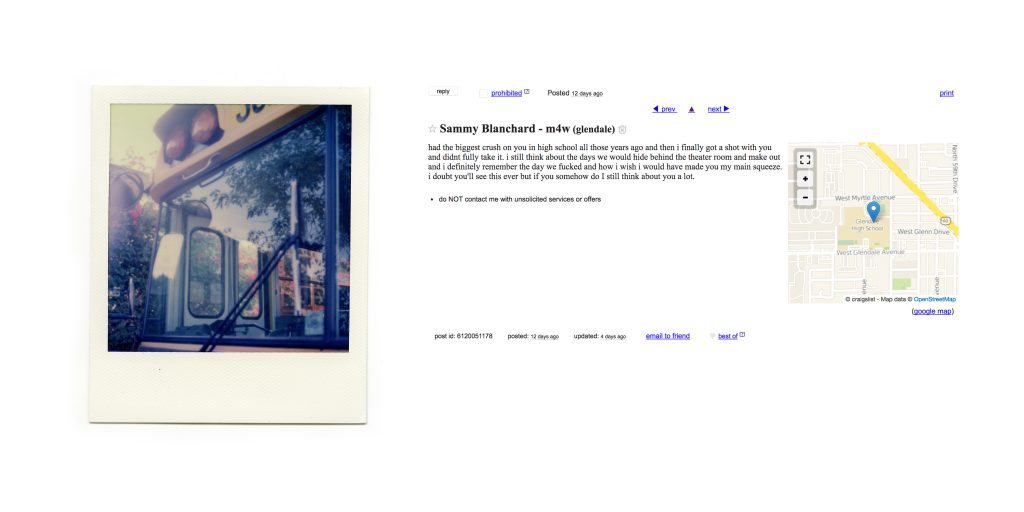 An exhibition that is as timely and fascinating as it is visually stunning, Where We Once Were examines the intertwining of universal human emotions with the anonymous nature of the Internet. Artist Kit Abate presents 57 pieces that originate from the Missed Connections section of the website Craigslist—each its own story and slice of life.

Each piece is paired with a Polaroid photograph taken by Abate at the location of each post’s origin. See it through September 10 at Eye Lounge. We spoke with the artist about the details of this complex project.

What inspired you to create this exhibition?
I was taking my work to different portfolio reviews, and I had these three images that got grouped together, as they didn’t really go with anything else I was making. I liked them but didn’t really know what to do with them. Two separate reviewers brought up the idea of missed connections. I’d been thinking along those same lines. I took the scientific approach and decided to look at all the ways people have explored missed connections and how the subject has been dealt with. There’s been novels written, cartoons and much more. In my investigation, I went to Craigslist (CL) and started reading the Missed Connections section.

Was it immediately intriguing?
At first, it felt very surface, because 90% of them are directed towards strangers, like “I saw you on the bus, you’re hot,” type of posts, and I wasn’t really attracted to those. However, I kept reading and I found ones that are very clearly directed to specific individuals regarding personal relationships and friendships—that was the meaty stuff I wanted. 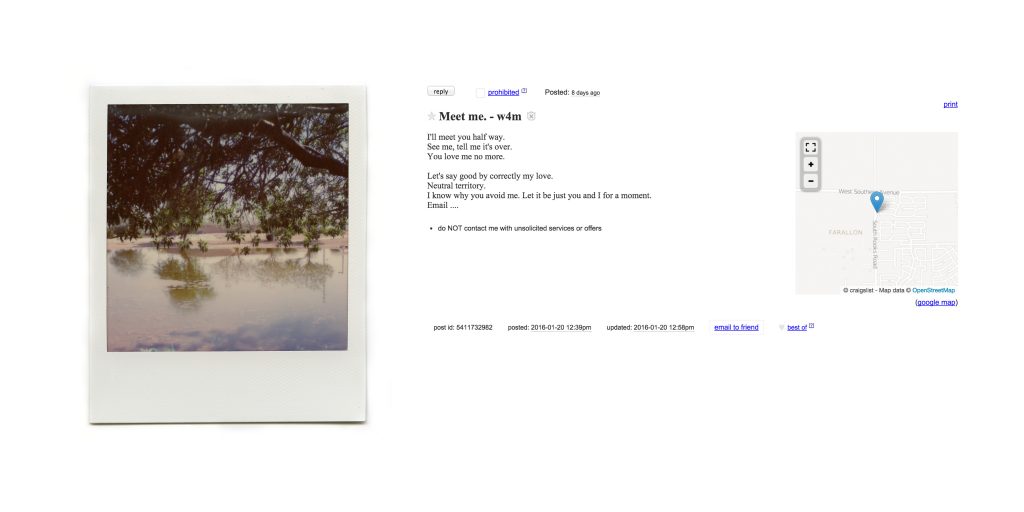 Then you started pulling out the posts you were most interested in?
Yes, but the criteria then became that they had to have maps. On CL, you can choose if you want a map and how specific you want your map point to be. I thought it was so interesting that this idea—what I call shouting into the void—in this limited and anonymous Internet space allows adding a very specific map point to the post. For me, it allowed me to infiltrate these posts in a deeper way.

Each post in the exhibition is paired with a photograph. You took the photos at each map point, right?
Yes. I went to every single spot. Every post with a map pin is where I went to photograph. It became a very interesting dialogue between putting a very specific place on the map along with this anonymous message.

When you went to shoot, how did you determine what you were going to photograph to correspond with the post?
I tried to get as close to the point as I possibly could. Some of them do have the exact address or other specificities. And then observe my surroundings.

Did you intentionally try to relate the image to the text?
I tried to not read into the posts too deeply when I was making the photographs because I didn’t want to fall into a trap of trying to literally express what the text in the posts was saying. I did want to convey a feeling. There were three times when I ended up in the middle of an empty field, and in those cases, I decided to attack it from the point of a photographer and uncover what there was to be seen.

When you were reading these, did you become emotional?
It really resonated with me. I’m not a person who shares a lot of personal things on social media. What resonated is that we have the need to share this personal information while maintaining a level of anonymity, without everyone commenting or liking or sharing. As far as my emotions, there are lines in some of these…I could write a novel that starts with lines from many of them. There’s one that starts with, “I forget about you every day,” which is very impactful—the type of line that makes you think about your own life.

When you went to the locations, did it intensify any of those feelings or emotions?
No, because most of the time everything was so banal and normal.

Did you hope to get a deeper look or see some of the people who created these posts?
Not really. There were times when I was at an exact address and I’d think, “I wonder if the person who wrote this is home right now,” or that they could be looking out of their window at me and not realize that we have this weird connection. The Internet is such a strange place and I find the anonymity that comes along with it to be fascinating—that it can sometimes create a safety net.

Learn more about Kit and her work at www.thekitabate.com.