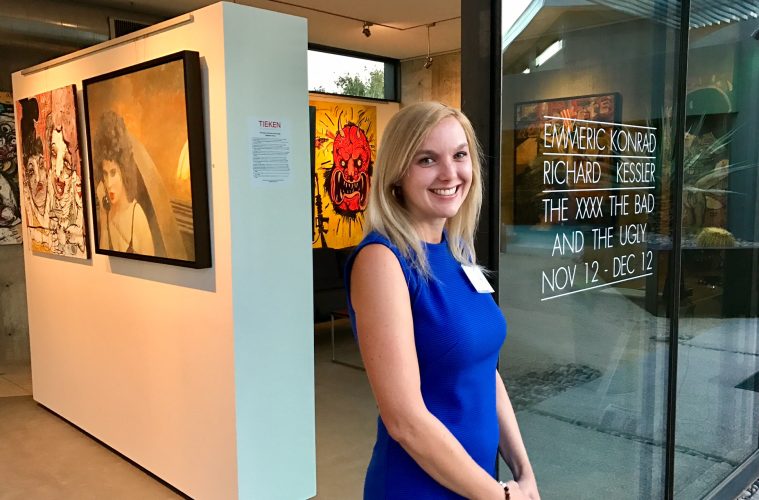 Nicole Royse: A Life of Art 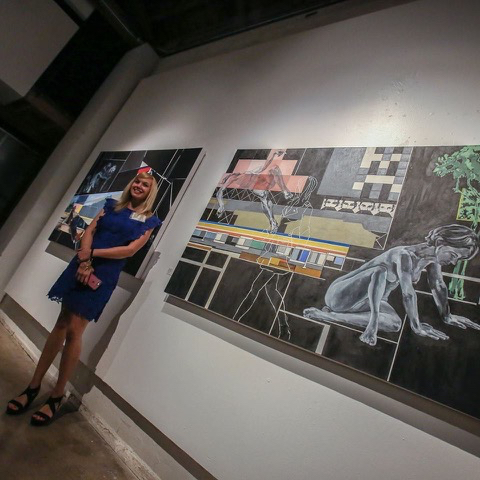 There was a time when Nicole Royse had many hours every week to create artwork, which she’d been doing since childhood as a lifelong pursuit, passion and outlet. But after college and the birth of her daughter, Royse decided to take a break and focus on supporting other local artists and the Phoenix art scene in general. “I’ve done something like 55 shows in five years,” she recalls.

Since majoring in art history at Arizona State University in the mid-2000s, Royse has managed to really get plugged in with the various museums, galleries and venues around town. In the beginning, she was living in the far East Valley, which didn’t have a strong arts community. These were the years before the Mesa Arts Center. Royse felt a calling to become more connected. She wanted to get the juices flowing and help get the arts moving around the Valley.

At home today, Royse has three kids and a hectic schedule. Her children are aged four, six and seven. When she’s not running from one school to another for activities (she volunteers four times a week and helps with many extracurricular activities), she’s driving back and forth between her home in Tempe and monOrchid in the heart of Phoenix’s bustling, though small, arts district, where she has been the full-time curator for the last four years.

Royse grew up in California until high school. Unfortunately, her parents fell into drug and alcohol abuse and she battled with that environment her entire young life, retreating into art for solace. Eventually Royse, an only child, ended up moving in with her grandparents and has had no contact with her parents since. Fortunately, she was blessed with a very wonderful grandmother. “She’s been the greatest support in my life, outside of my husband and kids,” she says.

Royse just celebrated 14 years of marriage to her husband, Rob, on Thanksgiving. Career-wise, the two seem like day and night: she’s a Phoenix arts booster and curator, whereas he is an auditor for Ernst and Young. “I’ve always been a self-motivator and a hard worker,” she says. “With my own art, it’s been more of a personal thing. I hope to get back into painting, but I’ve been a little creatively stinted.”

After graduating from college, Royse looked for art communities and places to engage around the Valley. And while she’s made connections and curated at many different places in the last several years, her strongest connection has been at monOrchid. For the last four years, serving essentially as a volunteer, Royse has served as the main curator and informal director for both Shade and Bokeh galleries. 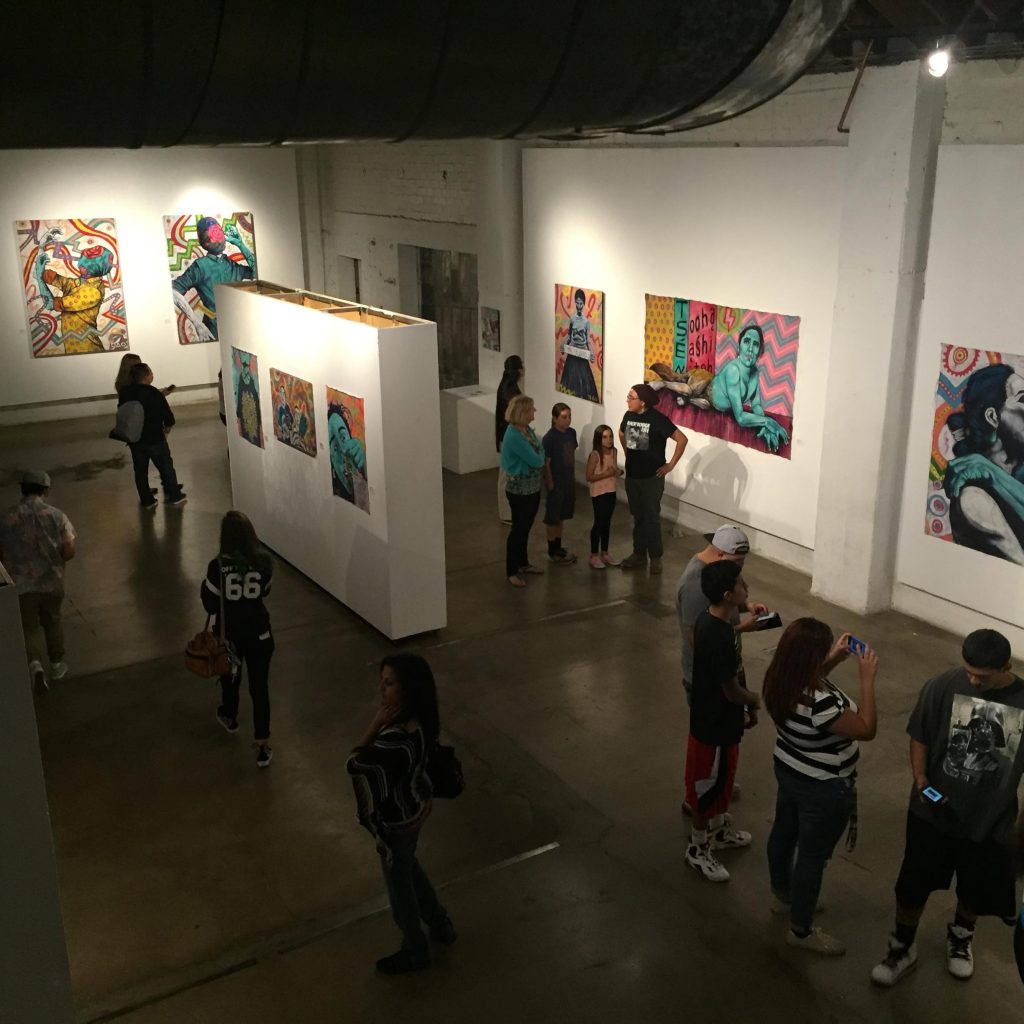 She patches, she paints, she sands—does all of the installation work—as well as writes press releases and more. Christopher Oshana, a veteran, PTSD survivor and photo artist, has been there for Nicole to “help when things get heavy in the install or when I need to sand and paint walls.” He also provides the gallery with security for First Friday openings.

Royse reports that the galleries now see an average of 3,000 to 4,000 visitors every First Friday. MonOrchid is first and foremost an event space, so when Royse curates, she often has to plan things around various weddings and corporate shindigs.

One of Royse’s favorite shows to date was “Feminism Today,” a group show she mounted last year featuring many female artists from various generations in the Valley. “It was really great to bring all these women together because they all have very different backgrounds and styles,” she says. “But they also all have strong ideas about what it is to be a woman and an artist.” 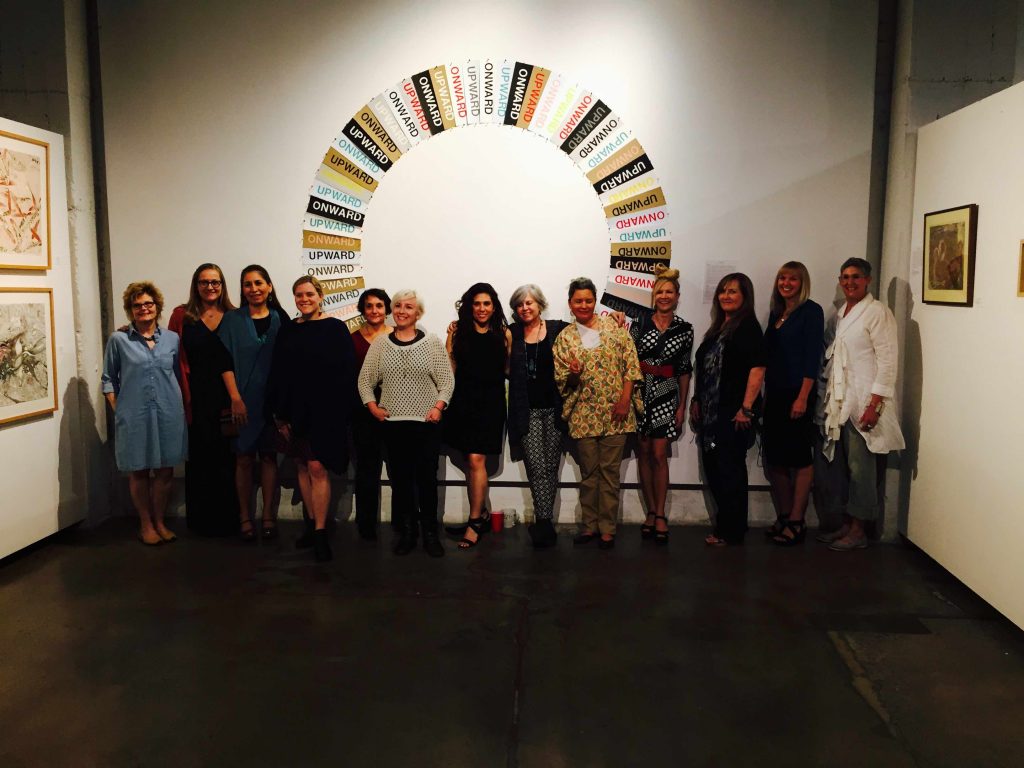 For Royse, some of the highlights from that show were Christine Cassano’s piece (Cassano currently has a show on view at Modified Arts through Dec. 10) and a large self-portrait by Monica Aissa Martinez showing her husband next to her doing a headstand. That year, Martinez was also selected to participate in the Artists of America nationwide show hosted by Crystal Bridges Museum of American Art in Bentonville, Arkansas, along with a handful of other Arizona artists.

According to Royse, Martinez really knows how to get inside an object and turn things inside out. She not only is a painter but also does sculptural works and drawings. “She dissects insects and people in her paintings,” Royse says. “She does very biological work, makes all her own tempera paints and works very organically.”

For “Feminism Now” Royse was surprised that some of the highly esteemed local artists she originally selected canceled at the last minute. Despite the setback, she says it all it worked out—she was glad to have the challenge to rethink some things and hustle. The result was something that made her feel truly proud. Not only did she get to showcase some of the best local talent, she also came up with a show that was aesthetically beautiful.

Another monOrchid show that stands out in Royse’s memory is the huge and elaborately planned “Apache X” that she did with artist Douglas Miles in March 2014. This was the first time she had the opportunity to work as the sole curator of the Shade Gallery at monOrchid. Basically the show was a 10-year retrospective of the artist’s work. But anyone familiar with Miles knows that his work takes all different forms and shapes (from murals to skateboard decks), and logistically balancing it all would be a daunting task for any curator. 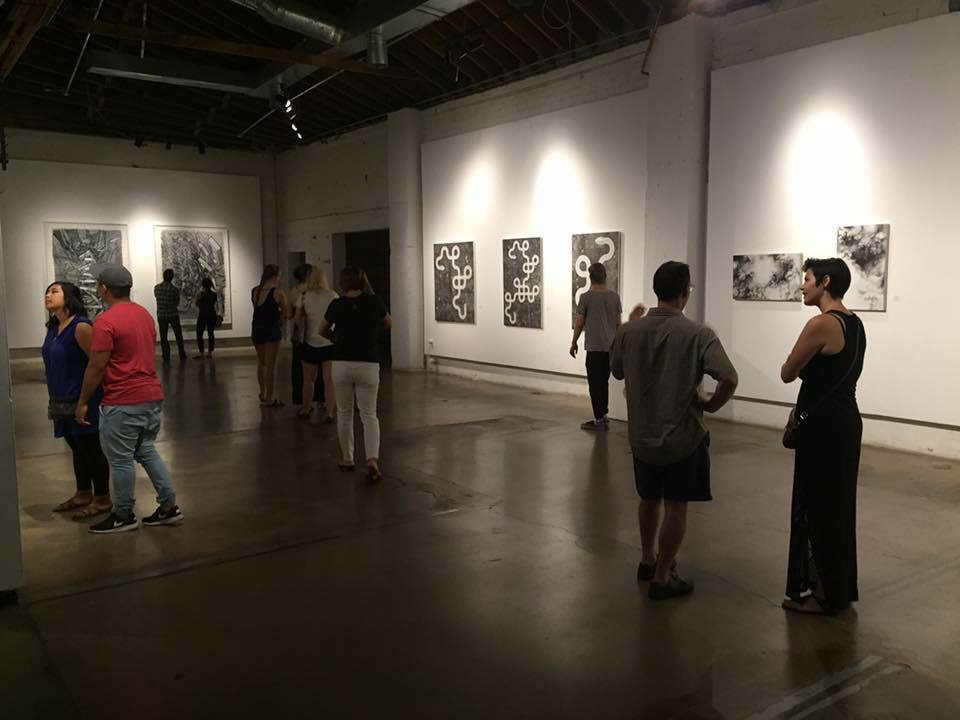 Royse dug deep and spent six months in planning with Miles. During that time, she made numerous trips to the San Carlos Apache Reservation in eastern Arizona, where the artist resides (a two-and-a-half-hour drive each way). She got to spend hours with the artist, poring through his works to make selections for the show.

Royse had a personal connection with Miles, his work and the landscape because her grandmother is also Apache. She says it was wonderful for her to get to know the artist in a deep way and connect with his family. Once they’d made their selections, it was time to return to monOrchid for the install. Royse hung half a mobile home inside the gallery. They also presented Miles’ painted doors, parts of cars and other large items.

“He often works on found objects with spray paint, mostly,” she explains. And some of these objects are enormous in size and weight. It was certainly a challenging show for the walls of monOrchid, which usually only see paintings and photographs.

Another component to the show was Miles’ collections of painted skateboards, which he’s been making ever since his son was very little. He expanded this into a business, Apache Skateboards, and also something of a movement. Miles saw it as a way to connect community members and do something for the youth on his reservation to keep them healthy, active and off the streets. By now documentaries have been made about this work, and the Heard Museum also featured some of it in their “Beautiful Games: American Indian Sport and Art” exhibit last year.

At the end of the day, the show was very well received and generated some of the best press monOrchid has had in its years on Roosevelt Row. Miles, too, got a lot of press, including a visit from the New York Times, with the help of Royse’s public relations support and referrals.

Royse also curated for Willo North Gallery steadily for one year, beginning in June 2014, until it closed. At the same time, she was also curating at the Renaissance Hotel downtown. She estimates that between the three spaces, she has curated and hosted more than five dozen shows since 2012.

Aside from curating, Royse also does art consulting and artist management for independents around the Valley. When these artists plan a show, she helps them select works, manages their posts on social media and does other public relations work for them. She is providing this kind of support for Beth Ames Swartz at the moment.

For the December opening at monOrchid, Royse will feature the photography of Marilyn Szabo and ceramics/mixed-media works of Constance McBride. Szabo’s show is entitled “Life & Death / Portraits.” “She’s been wanting to share this collection of portraits taken over the last 25 years. It will be a really beautiful show,” says Royse.

Constance McBride’s “A Show of Hands” will be in Bokeh Gallery, featuring images of women’s hands. There is a theme of life, beauty and aging. “Typically, photography would be in Bokeh and painting/sculpture in Shade,” Royse explains. “But for this show it’s reversed.”

December is usually a strong month for attendance. MonOrchid gets great crowds and everyone is usually positive. Hopefully this will boost sales. While the gallery seemed to be on a constant upswing the last few years, mirroring the economy’s slow but steady recovery, in this election year with all of its uncertainty, sales have not been great.

The big news for Royse is her announcement that after four years she will be leaving her role as chief curator at monOrchid. She says she has simply outgrown it there. Royse says it was a difficult announcement for her to make, but she timed it to coincide with the end of the year, and one final show at the gallery that she can be proud of. Royse says it will be good for owner Wayne Rainey and the Shade Projects team to have someone different in that role because they seem to want to take the space “in a new direction to keep up with changes in the Roosevelt area.”

Royse says she hopes her departure from monOrchid will eventually be a very calming and positive experience for everyone. She’s done so much in the last four years and has been so deeply engaged and busy that now she is looking to be more selective about the shows she works on. “It’s a little sad, but I think it’s best for everyone involved,” she says.

Royse will continue to work with other galleries and artists independently. She wants to help Phoenix break into the national arts scene and get the coverage it’s been lacking. She recently curated “XXXX, the Bad and the Ugly” with Los Angeles-based artists Emmeric Konrad and Richard Kessler at the Tieken Gallery in Paradise Valley. This show will be on view through December 12.