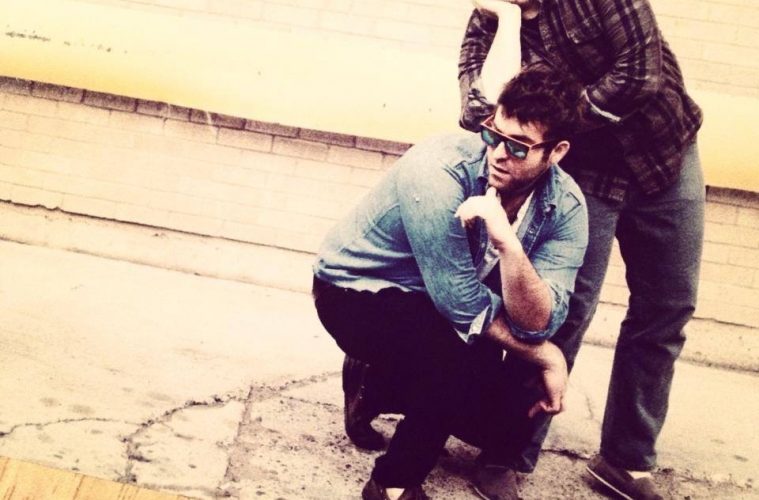 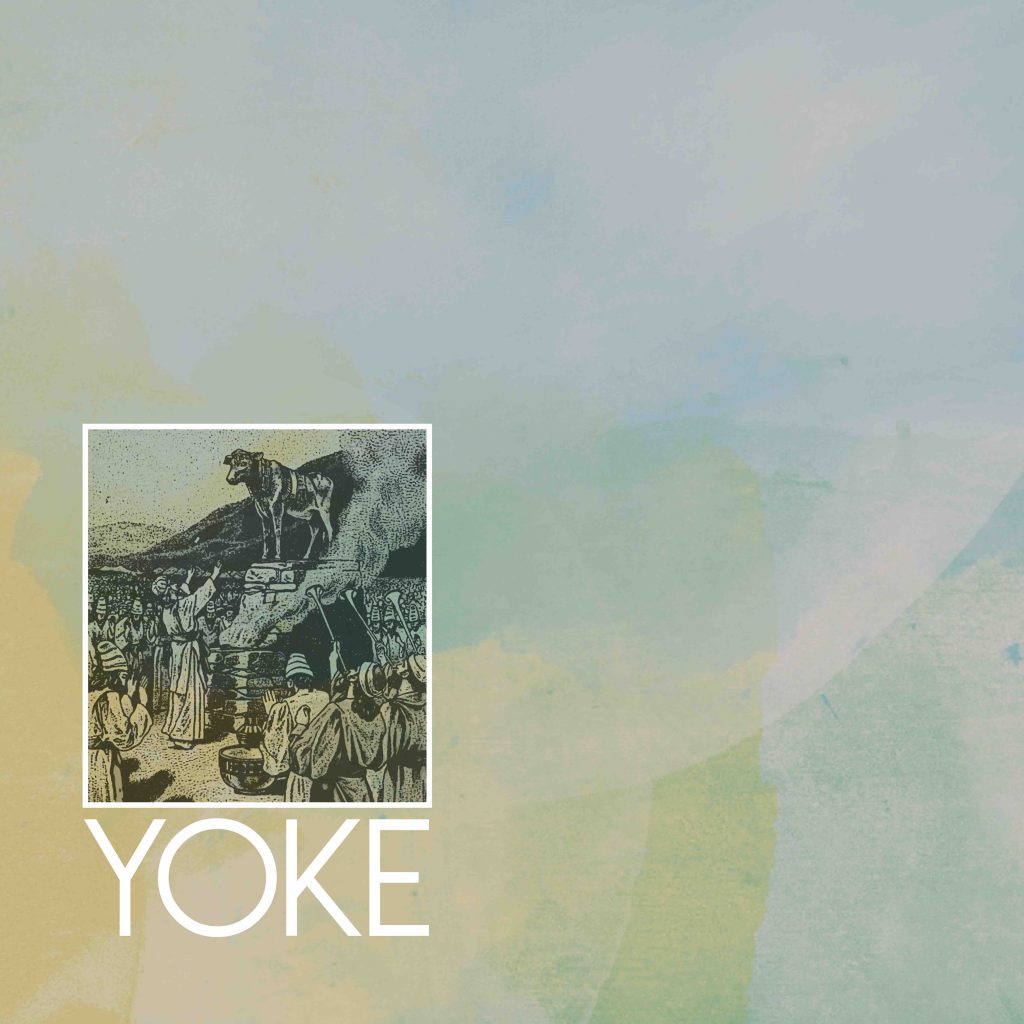 In the three years since the release of Shell Art, Saddles has gone through a lot of changes. For one thing, their live show is an explosive five-piece band, but the recordings remain true to the core duo of George White and Charles Barth. A lot of folks like the expanded sound, while others enjoy the intimacy of the recordings. YOKE shows a tremendous amount of growth for the duo. They clearly have developed a better idea of how to write songs that will instantly translate to their live show.

YOKE sounds like something of a transition record as Saddles further explore their range. It feels slightly schizophrenic, but in a good way. The newer songs sound like they are reaching into new synth-scapes while they also rev up the guitars. Other songs seem more in line with the sound they defined on Shell Art, but YOKE is a brand-new beast. Upon listening, it’s hard to believe that the entire live band isn’t on the recordings, but it’s just Barth and White.

YOKE begins with a weird intro of hypnotic tones and background crowd noise, before it kicks into “Tarot,” one of the two preview singles released immediately before the album. It definitely shows the dynamic duo laying down tracks with the intention of playing them live with a band. It’s got luscious synth work. Barth’s vocals come across with a Pet Shop Boys vibe, and there’s a definite electronica leaning to this one. They keep it real with a bizarre interlude smack dab in the middle that feels like a free fall in sound. There is a lot more going on in this song than what immediately meets the ear, and it becomes more fascinating with scrutiny.

“Lottery” carries on the more traditional Saddles sound that their audience has come to know and love. It also shows off the angelic vocals of Barth a bit better than when they get slightly lost in the mix live. There is a lot more soundscape experimentation here, as well, and it comes down to near Philip Glass minimalism for the first minute before exploding into shoegazing guitars, reeling them in only for the sake of more vocals. It’s a rousing, driving number that’s been a live favorite for some time, and it’s captured accurately on the record.

The second pre-release single was “Face Paint” and, like “Tarot,” it shows a different side of the band’s sound, with a deeper, darker feel. There is a cherubic quality to Barth’s charming vocals. The breakdown in the middle is dizzying and elevating at once, and it very nearly reaches a crossroads of dream pop and darkwave. It’s an alluring, intoxicating number to say the very least.

The church organ opening for “The Altruist” is a nice touch to a comforting synth song. It features clever samples, which are scattered here and elsewhere throughout the album for artistry as much as emphasis. The mix between the melodic piano line and the grunge-fuzzed guitar is maddening, as they seem to duel, turning an otherwise electro-pop single into near Math Rock territory and one of the more unusually successful experiments on the album. 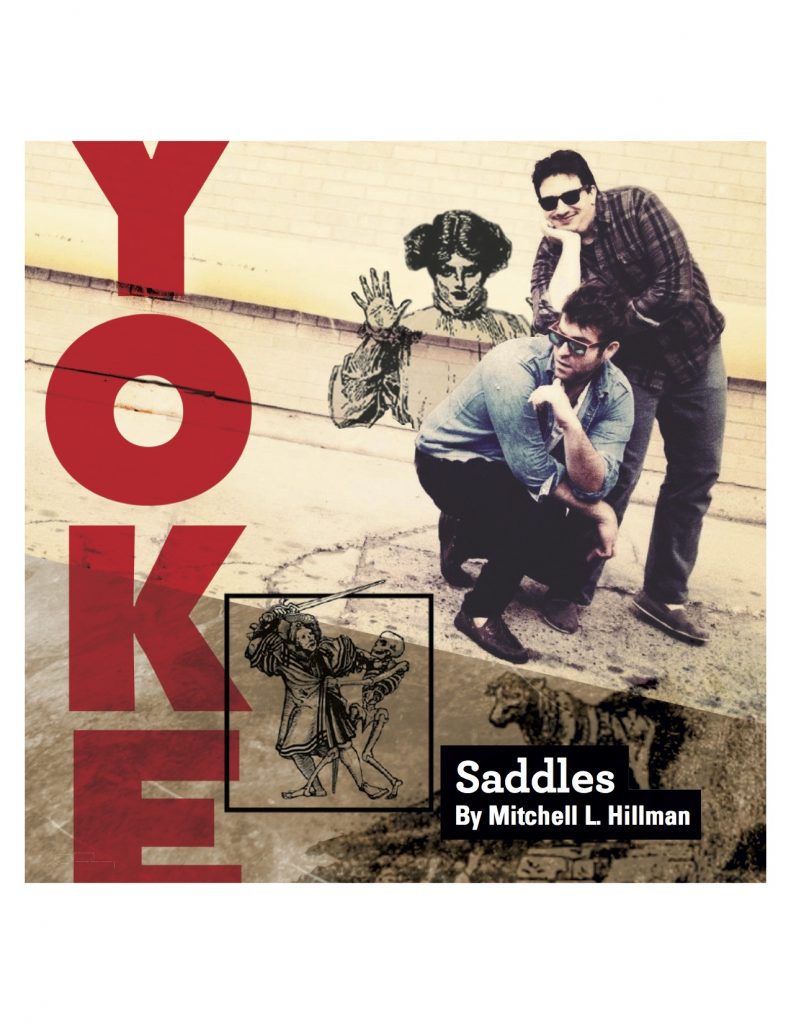 “Comfort” was released nearly a year and a half ago, and here it shines as the centerpiece of the album. It sounds like the transitional piece that ties this album to its predecessor. Upon its release last year, it seemed to be more of an oddity that didn’t really seem to belong to Shell Art, but it doesn’t feel entirely at home on YOKE, either. That’s the genius, falling smack dab in the middle, while standing out like a blazing star.

The backing track to “Eraser/How’s My Writing” sounds back-masked, and the entire track is luxuriously disorienting due to the beautifully complex percussion strewn throughout. It’s something that would oddly make one hell of a dance remix. The music swirls around the soothing vocal, creating a convincing aural vortex that’s damned danceable. None of that is an easy trick, much less getting a little trip hoppy here and there.

Meanwhile, “Red Carpet” may be the best thing Saddles has ever written or recorded. It starts with just a surf guitar and Barth’s vocal, delivered with a near Neutral Milk Hotel vibe. Harmonies join in here and there, but when the pop explodes, it goes big and is all-out sonic bliss, filled with mad, complicated pop obsessions. It’s the entire arrangement here—the choir vocals, swooning keys and driving guitars—that leaves your ears in awe. It only quiets for a moment before the final explosion, the last crescendo with a triumphant tone, before returning to only guitar and Barth, as it began, before fading away.

“Old Sin” is a more traditional Saddles song and just feels damn good on your ears. It must be said that YOKE has near-perfect song sequencing; every turn is interesting, every moment needed. This is a comfort tune after the ride that was “Red Carpet,” which is why it feels so good to relax with this celestial dream pop.

“Rolodex” is more in vein with the newer-sounding material, which means awesome synth-play and soundscape fantasies with a darkwave edge. It has a heavy Gothic vibe with various flourishes, from haunting keys to a darker backdrop. This only serves to highlight Barth’s golden throat and one of his finest vocal performances. It’s a beautiful, moving piece that could be one of those surprise ballads that takes everyone’s breath away with its damned intimate vibe.

YOKE finishes with “White Flag,” drenched in heavy layers of textured guitar with soaring vocals that will leave your head spinning. It’s a fast-paced, driving number and one of their most aggressive songs to date for the spirit of the guitars alone. Granted, the slight snarl of the vocals and the lyrics of desperation lend a hand in that regard. Still, it’s another fully realized composition like “Red Carpet,” and a brilliant way to end an album. Let’s hope we don’t have to wait another three years for Saddles to follow up this album.

Be sure to catch Saddles when they release YOKE at The Rebel Lounge on December 16, where they will be joined by Snake! Snake! Snakes!, Celebration Guns, dent and Whither Is God.