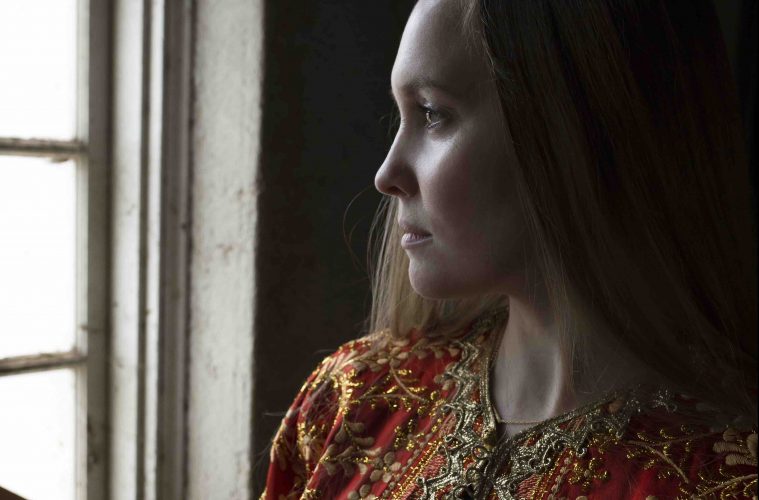 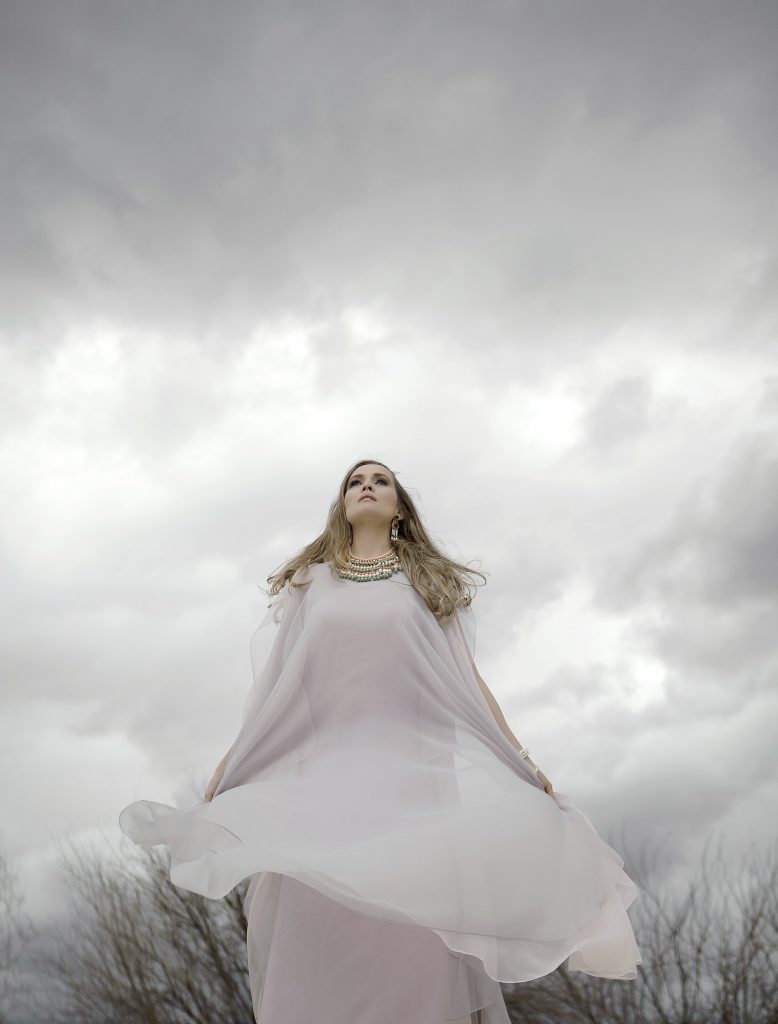 For a singer, the voice is an instrument, and performance involves many dynamics. Though technique and form are important, cultivating an emotional and spiritual connection with the music is equally essential. Phoenix singer Anna Vivette has both the technical and spiritual elements, crystallized to form a stellar singer. She is classically trained in the bel canto opera singing tradition and has performed professionally since she was 16 years old.

Vivette grew up in Chicago and is the oldest of four children. Her mother worked as a librarian, and her father as an artist. Her dad was an audiophile and didn’t let her listen to anything except classical music. “I barely even knew who Michael Jackson was as a kid,” Vivette said. “But I was really well educated in classical music. That marked me in a really positive way. I think it also cultivated in me a sense of composition and helped develop my ear even more.” She would often make up vocal melodies to layer on top of symphonic elements to help her mimic some of the singers, even though she didn’t have any formal training at that point. This was the beginning of her developing a voice of her own. She also played the violin as a child, which helped her learn pitch.

When she was about 10, Vivette would go to urban, abandoned buildings or under bridges to test out acoustics and experiment as a performer. During these experiences Vivette was both the audience and the performer, and she got to feel the more spiritual dimensions of singing. “It’s not that I had any irreverence for the audience, it’s just that there was something about discovering a place with my voice, learning about my voice from that place and also repurposing that place with my performance,” said Vivette. “It became something very personal and fun. It was very playful. When you’re in front of an audience, they have expectations as soon as they walk into an auditorium. This urban experiment was as pure as it could be. It was something that allowed me to get deeper into the music. When it did come down to the time to perform live, I had a more spiritual connection to the craft rather than having all the technical work.” 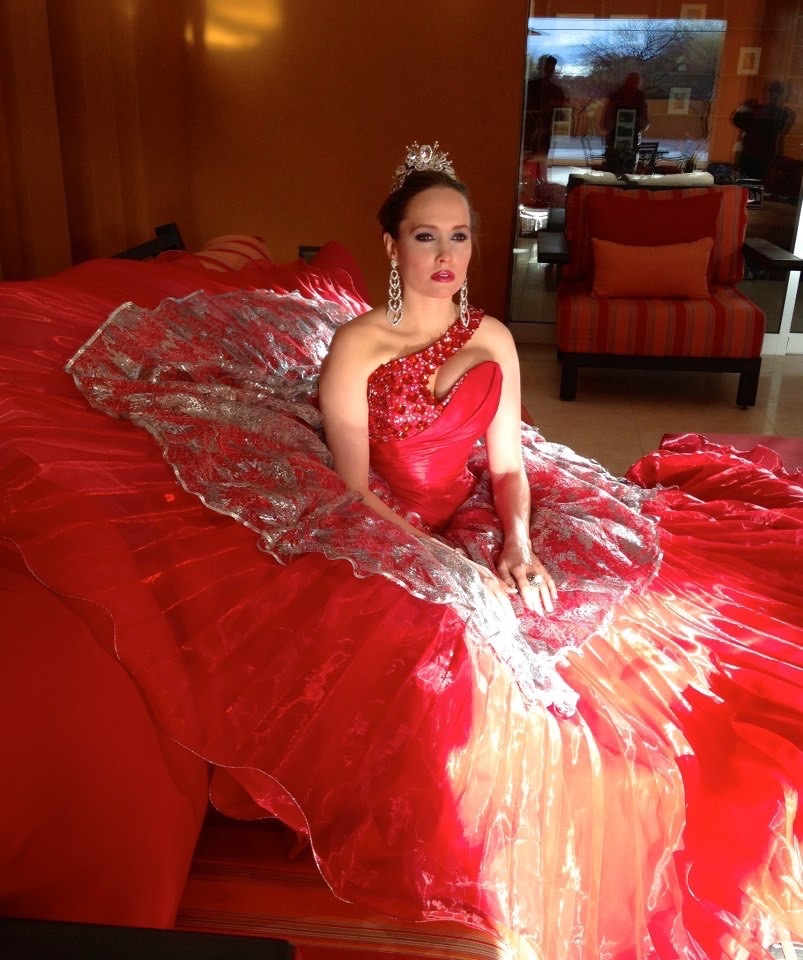 For Vivette, singing in abandoned spaces was also about dealing with the self-critical aspect that loops in a performer’s head when they are singing. When there isn’t an audience judging the performance, the performer becomes the judge of the singing, and it can liberate them to express more freely. There’s also the dynamic of rejecting the ideal of what a singer is or what they are supposed to do that seems to fall away when the singer and the audience converge into one.

When Vivette was 16, she visited the Lyric Opera of Chicago to audition as an actress. She landed some parts and was able to share the stage with famous opera singers such as Renée Fleming, Samuel Ramey and Bryn Terfel. Samuel Ramey would give her lessons backstage after shows. She was able to soak up a lot of great lessons from the singers, and they have stayed with her to this day.

After she turned 18, Vivette moved from the suburbs into the city. There, she met bestselling author James L. Swanson. “He introduced me to all sorts of interesting people. I think that’s the great thing about writers,” said Vivette. “They see the world through this colorful lens of characters and places, converging them all together. And there’s this backdrop of a scene about to play out. That was what was so fun about hanging out with him. It impacted how I live my life. Every day there is a scene that can happen, straight out of a film, if you create it.”

Vivette stresses the importance of surrounding herself with people from diverse backgrounds. She feels that this has shaped her as a person and made her more dynamic in general. “When you hang out with one type of group, it can make life a bit too narrow,” Vivette said. “When you broaden the types of friends in your life, like scientists or historians, the better conversationalist you become and the more interesting the world becomes. If you have a lot of different friends who are educated and diverse, it’s almost like having a college education in itself.” 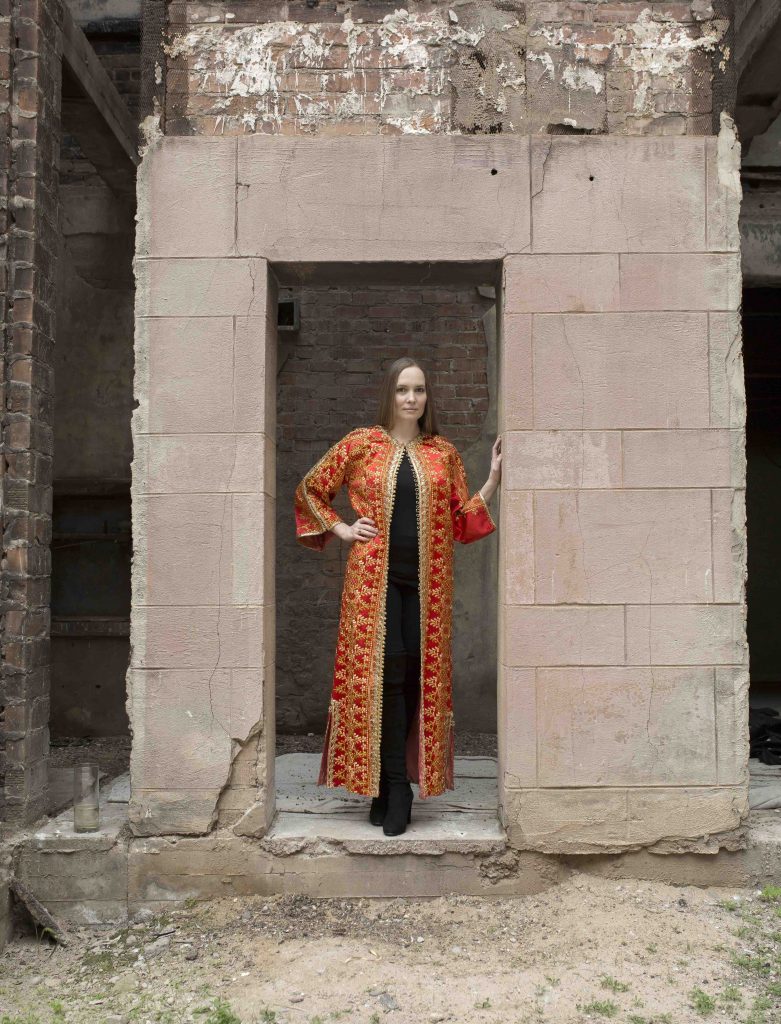 Vivette moved to Arizona about 15 years ago and began taking voice lessons with Ruth Dubinbaum, a prolific teacher who has helped several students reach incredible achievements in the singing world. Vivette originally trained with her about five times a week, but she didn’t have an agenda when she first started. She just wanted to dedicate herself to the discipline and get better. For Vivette, singing is an athletic endeavor, and in order to keep in shape you have to train voraciously. The thing is, singers can’t hear their voices as someone else hears them. Vivette compares it to hearing your voice on voicemail. It sounds so foreign. A voice coach can help a singer in ways that the singer can’t.

“I didn’t have a particular goal. I just wanted to reconnect with music,” Vivette said. “I wanted to get into the technique and rediscover myself, take it to a place where I could be in the zone and get my mind off the rest of my life and just be in the studio. I enjoy the work. And having that technique gave me even more freedom, creatively speaking, because I didn’t have the vocal limitations that I may have had before.” Around this time Vivette started performing at weddings, resorts and special events.

One place in particular that she holds dear in her heart is Amangiri. The exclusive resort on the Arizona/Utah border often draws a celebrity clientele, looking to get away from it all. As part of the resort experience, guests rode on horseback into a canyon where Vivette would be singing with bats swirling all around her. She described the feeling as almost like being in a Western film. She nicknamed the place God’s Ear, as she had prayed for a child during her time there, and a month later she was pregnant with her daughter.

Despite Vivette’s extensive classical training, she decided to join a couple of bands. One of them was called WOMB, an acronym for Warriors Of Make Believe. While in that band, she met Christina Cole, who in turn introduced her to her husband, Gardner Cole, an American songwriter and music producer who has notably worked with Tina Turner and Madonna. He and Vivette developed a fluid professional relationship and began working on a project that would turn into her debut solo album, Pour Amélie. The record is an amalgamation of sounds and styles that stretches Vivette’s voice in myriad directions. It’s a tribute to motherhood and a psalm to her now two-year-old daughter, Amélie. 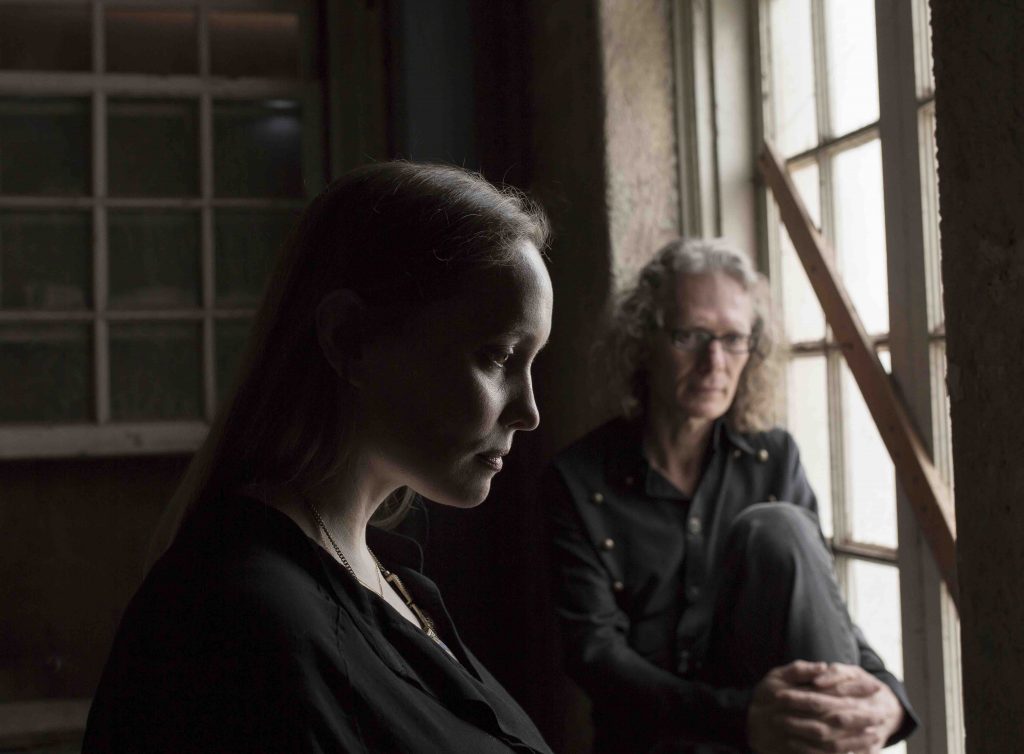 Vivette’s process for making recorded music is a bit different than when she performs live. She feels as though she has more freedom in the studio and calls it a sort of digital playground. Sometimes Gardner has music pre-written for her to sing, and sometimes they create the melodies and lyrics together. One of the key sources of support for Vivette throughout her creative endeavors has been her fiancé, Yves A. Klein, the son of the late renowned French artist Yves Klein. Her fiancé’s art deals with cutting-edge technology, including robotic sculpture.

Vivette and Gardner also have a group project called Secret Element and recently added internationally renowned violinist Thula Ngwenyama to the ensemble. The music has a wide variety of styles with an orchestral backing and is generated primarily for movie or television use. Vivette says that the creative energy is high between all three, and they vibe well together. The project has allowed Vivette to further express her varied range. Going forward, she hopes to incorporate more work in various spaces that are abandoned or secluded in some way for performances and recordings.

Another favorite project that Vivette worked on was Fabric + Space, held in an unused upper floor of the Hanny’s building, in collaboration with Oscar De Las Salas and Chris Loomis back in December 2012. An improvisational performance art piece, Fabric + Space took an empty volume and inserted kinetic sculpture accompanied by music, drums and Vivette’s hypnotic operatic singing. Vivette also collaborated with the late Janice Leonard on the Project Red shows. For Vivette, Leonard was a pure creative who never rejected ideas outright. She allowed Vivette to share in a space that was free of judgment. 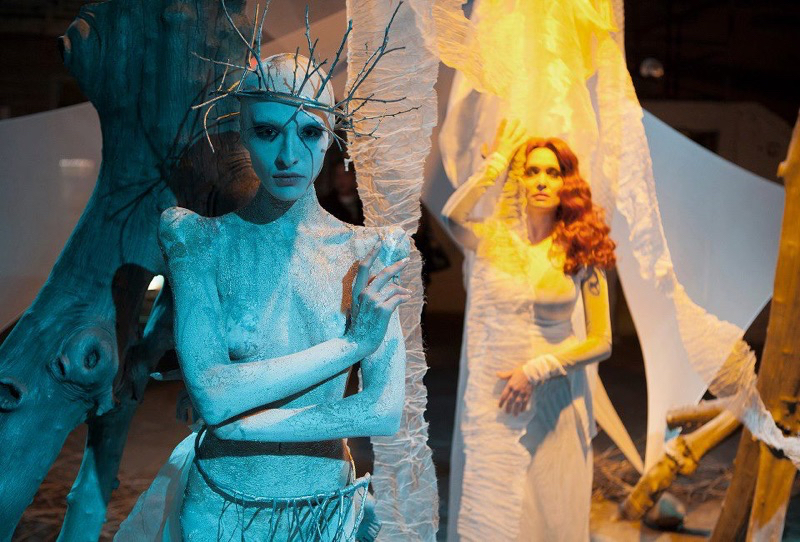 One of the most important developments in Vivette’s life has been motherhood. It has, in her words, broken her—in the best of ways. “It gives a depth to the work in the sense that children break you, but for the better,” said Vivette. “They force you to look at the world from the perspective of others who come before you. And that, mixed with Amélie’s unconditional love, for me was something I had never really experienced before. The depth of those feelings is something I pull from on a creative level, allowing me to feel deeply grounded in a more creative way.” 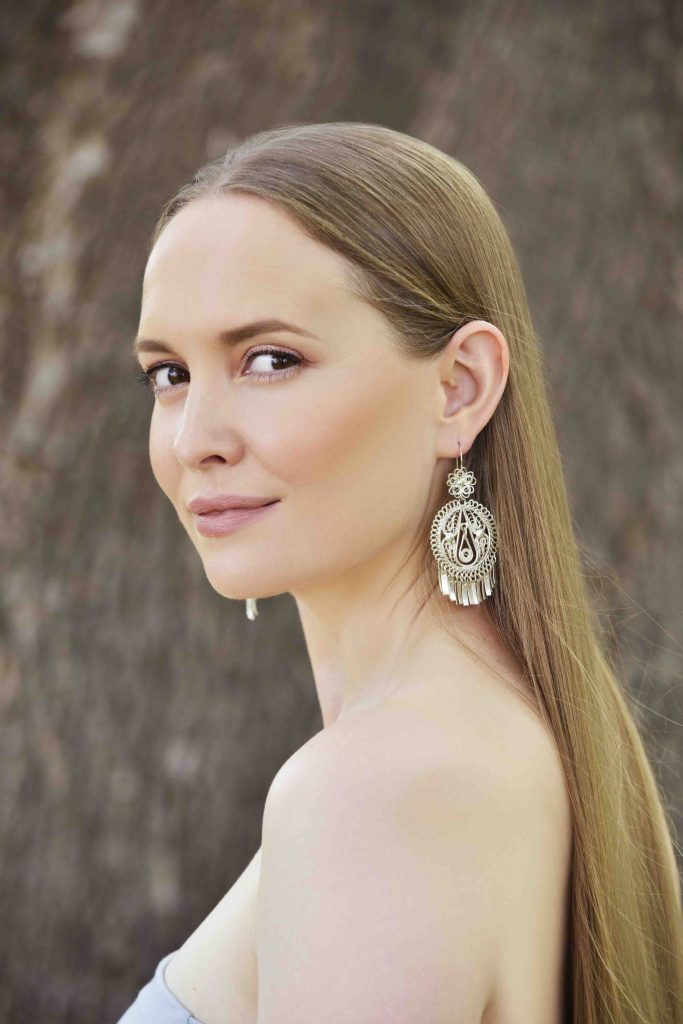