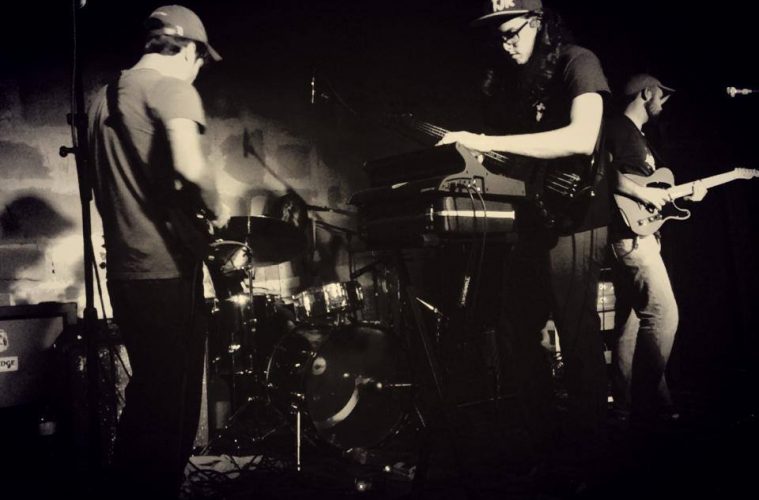 Four Bands to Watch: A Dispatch from the Phoenix Rock Scene

Just over 16 years ago, at the tender age of 13, I played my first concert at a local dive called The Mason Jar. Having never played a show before, I had lofty visions of Phoenix as a cultural mecca, full of rapt audiences clambering to the stage to adore my every move. As anyone from here could tell you, in 1999, this was unrealistic.

Over the last 15 years, I have been both an admirer and a critic of Phoenix, especially with regard to our perpetually fledgling music scene. I have played in many groups since my first and seen countless local shows. Great artists have fallen by the wayside, while others have brought their dreams to fruition. Some have moved away, some have died, some have simply given up, disillusioned by years of playing to nobody.

But that’s all over now.

It finally happened. Phoenix is now a flourishing hub of musical creativity with teeming venues, and true to our maverick nature, a scene is being forged in the name of Rock & Roll. Yes, you read that correctly: Phoenix is probably the most exciting scene in music today, and it is because of bands that proudly carry the torch of Rock, an art form that continues to be relevant in the modern era.

Last spring, my friend and creative counterpart, Nick Florence (formerly of Knights of the Abyss), showed up to my apartment raving about a handful of local groups that he implored me to listen to immediately. What I heard left me slack-jawed and inspired. It was one of the greatest gifts, and surprises, of my artistic career. I could hear Phoenix’s disparate musical elements coalesce before me, all sharing one quality: a drive to play genuine, authentic Rock music, with a capital R. I decided right then and there to start my own group, the Weird Radicals. The “Phoenix sound” I heard that day was so exciting that I ended a five-year, self-imposed exile from our scene just so I could be part of it.

Dent (The Innovators)
For fans of: Tera Melos, Abe Vigoda 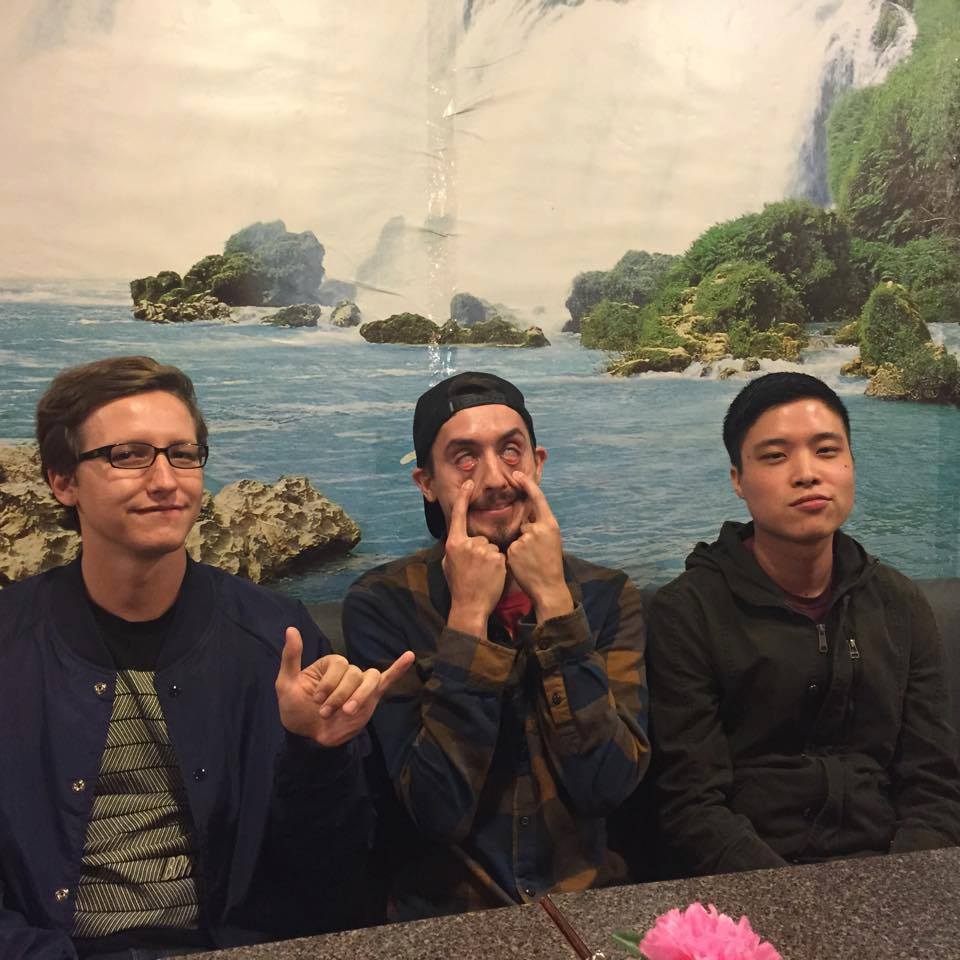 Dent’s self-titled EP could be one of the best things I’ve ever heard come out of Phoenix. Their music and visual aesthetic is fully formed, something one does not see every day. “Visit Us,” my favorite song by the band, cloys in its fluidity, a kaleidoscopic and unique mixture of haziness and pop hooks. Josh John, Jeff Taylor, and Bryan Ohkura create a striking panorama of the desert through rose-colored glasses, sedate yet unforgiving in its torrential waves of ambient sound.

Their melodies are intoxicating, leaving the listener dumbfounded at the interlocked contrast between the sheer scope of the music and the simple beauty of their warped-VHS songcraft. Josh John, the songwriter and singer of the group, humble and contented, is a rare talent. Often, great artists are seemingly unaware of their originality due to knowing the minute details of their writing process. Such is the case with John, eager to praise the Phoenix musical community as a whole, above his own work.

“Phoenix rules! We are very happy to be a part of the awesome things happening in the Valley at the moment,” John says. “[We, and] all of our fellow music-makers, are here to support one another.”

In the near future, Dent will be releasing a split 7″ single with Tempe’s Twin Ponies, another highlight of the Phoenix rock scene. Do yourself a favor: listen to Dent before they inevitably become famous.

Twin Ponies (The Poets)
For fans of: Pile, Television, Silverchair 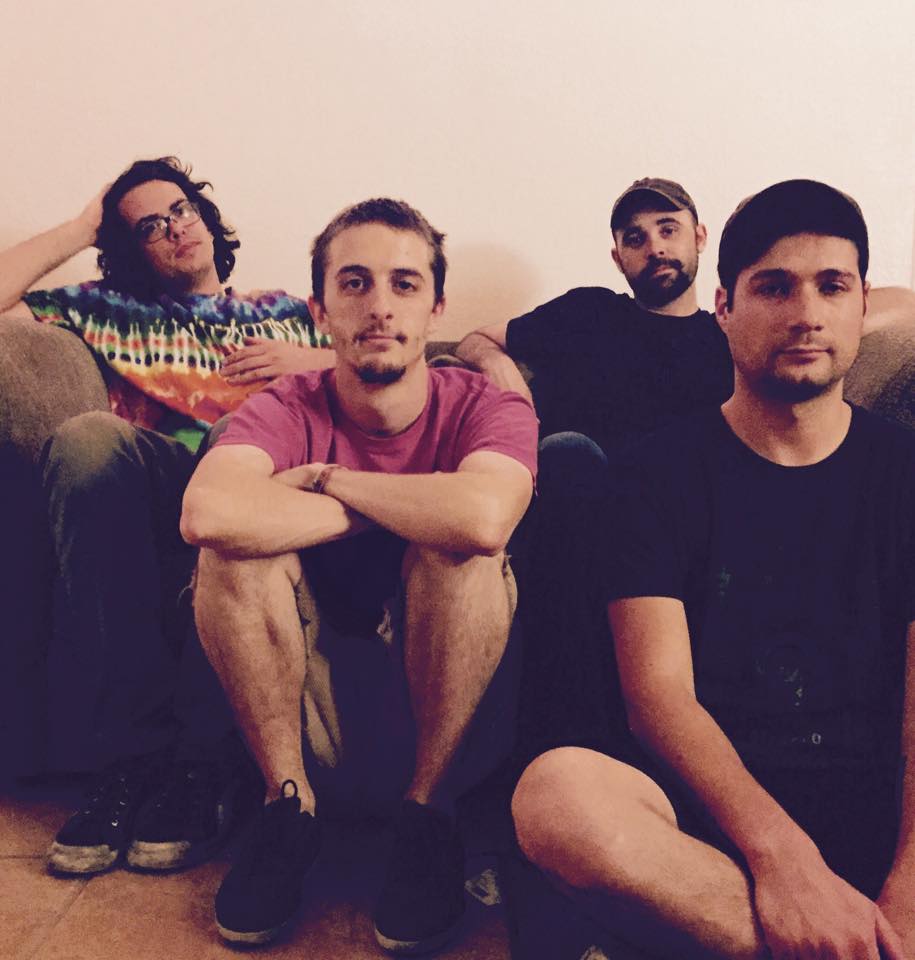 Transcending their influences to create a singular, mathematical style, Wayne Jones, Jacob Lauxman, Phillip Hanna, and Jordan Tompkins are Twin Ponies, and they are sincerely a force to be reckoned with. Upon hearing their last release, 2015’s Friendly Pet Mass Graves, I was impressed with their off-kilter and promisingly surreal songs, reeled in by guitar hooks and infectious polyrhythms.

I became enamored with the lyrics, written and sung by Wayne Jones, which are integral to the sonic portrait they create. Wayne makes poetic vignettes from the mundane and ordinary, giving an almost pastoral experience through his conversational words. These are observations I made before I even got to see them live.

Two words burst into my mind the first time I watched a Twin Ponies show: intricate and dangerous. The moment they stepped onstage it was like witnessing a machine, finely tuned and brutal in its utility. Going against meandering and high-minded musicality, every note was necessary, not one indulgent or wasted.

By the time they got to their final song, I knew I was seeing something very special, even aside from their impressive recordings. They closed that night with one of their best songs, “Merciless and Masculine,” a song whose effervescence on record could not have prepared me for the aural onslaught I witnessed in person. The performance of the song lived up to the title, and more. I watched a band build a hurricane onstage. 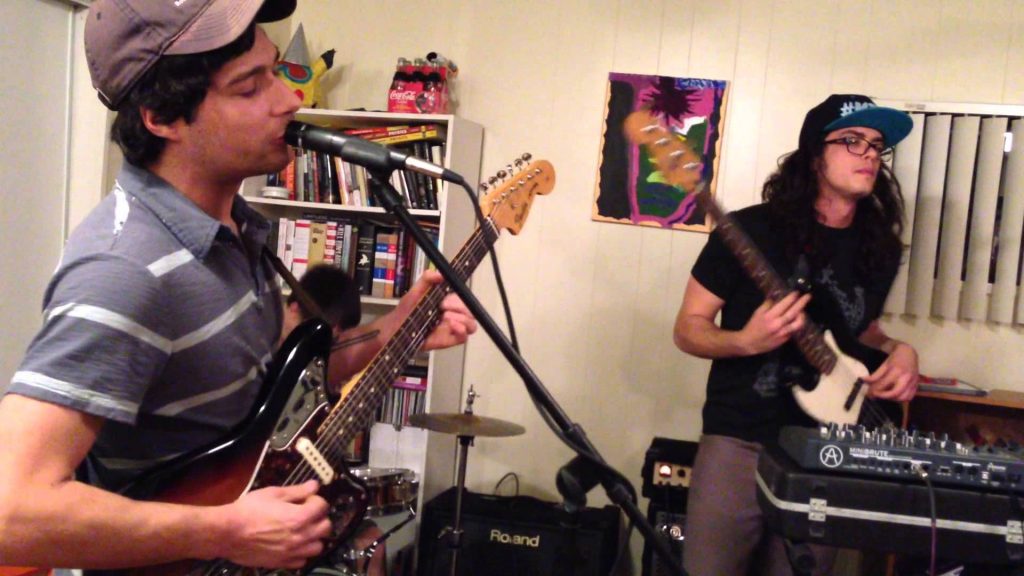 “Creating is a boredom-killer and boredom is bad for your health,” Jones says about the artistic compulsion to work. “Phoenix is special because every local offering is truly unique. We’re all different fruits.”

Twin Ponies will be performing Oct. 24 with LVL UP and The Expos at Rebel Lounge.

Sunshower (The Revivalists)
For fans of: Nirvana, Alice in Chains, post-grunge 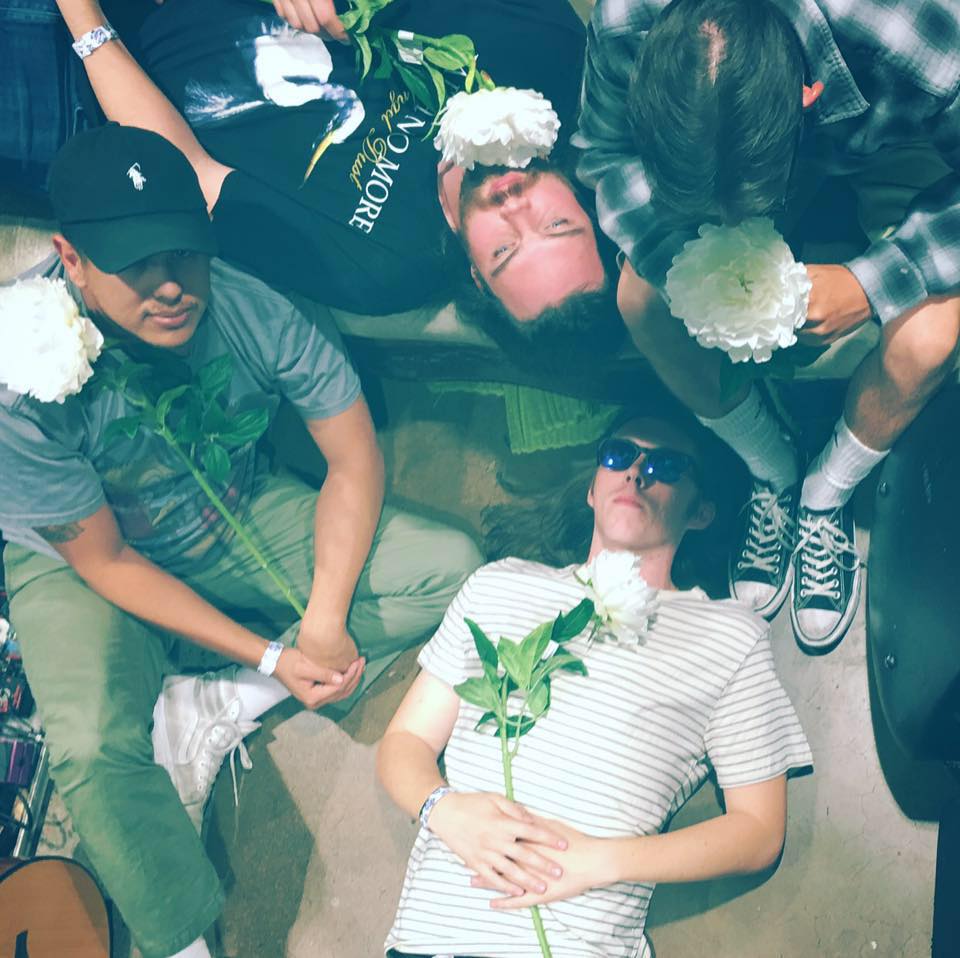 “If there ever was a musical revolution in Arizona, it’s happening right now. We’re living it, baby!” Eric Hula, singer and guitarist of Sunshower, relates to me. “I’ve been going to shows for a decade. I was there when [the rock/metal scene] was alive and well, and also when it died.”

Hula, Brent Gutierrez, Jorge Santacruz, and Kelly Emig are on a mission from God to bring the frenetic energy and heaviness back to Rock. They have succeeded. I saw them recently opening for Purple at Valley Bar, and it was a revelation to be sure. All the hallmarks of our last great era in mainstream rock (the ’90s) are evident in their album Leader of the Cult: heavy guitars, often awash in effects, gruff vocals and an accessibly heavy sound.

What sets them apart from other groups mining the same territory is the complete and utter lack of pretension in their work. They don’t come off tongue-in-cheek, ironically playing the styles of yesteryear to prove their street cred (which they also have); rather, they are earnest in their fandom, and that honest approach can be heard in songs like “Slave to the Season” and “Sorry.” In my opinion, this makes them true students of grunge and post-grunge, Alice in Chains and Bush alike.

“We draw inspiration from the good and the bad,” Hula says, referring to their post-grunge tendencies. “We want to make something that we want to hear.” Indeed, their influences from the past include musical elements currently considered out of style, and it is precisely what makes Sunshower great. The mixture of those elements might appear cheesy on the surface, but culminates in a sound that, while hearkening back to another time, is capable of standing on its own two feet, and does.

Outside this band, the members of Sunshower are also involved, to varying degrees, with the exciting post-emo group Goldengoat, as well as the hardcore group Reasons. If anything in this article indicates the rejuvenated state of our music community right now, it is the fact that three of the best bands in Phoenix share members for the greater good of our scene as a whole. 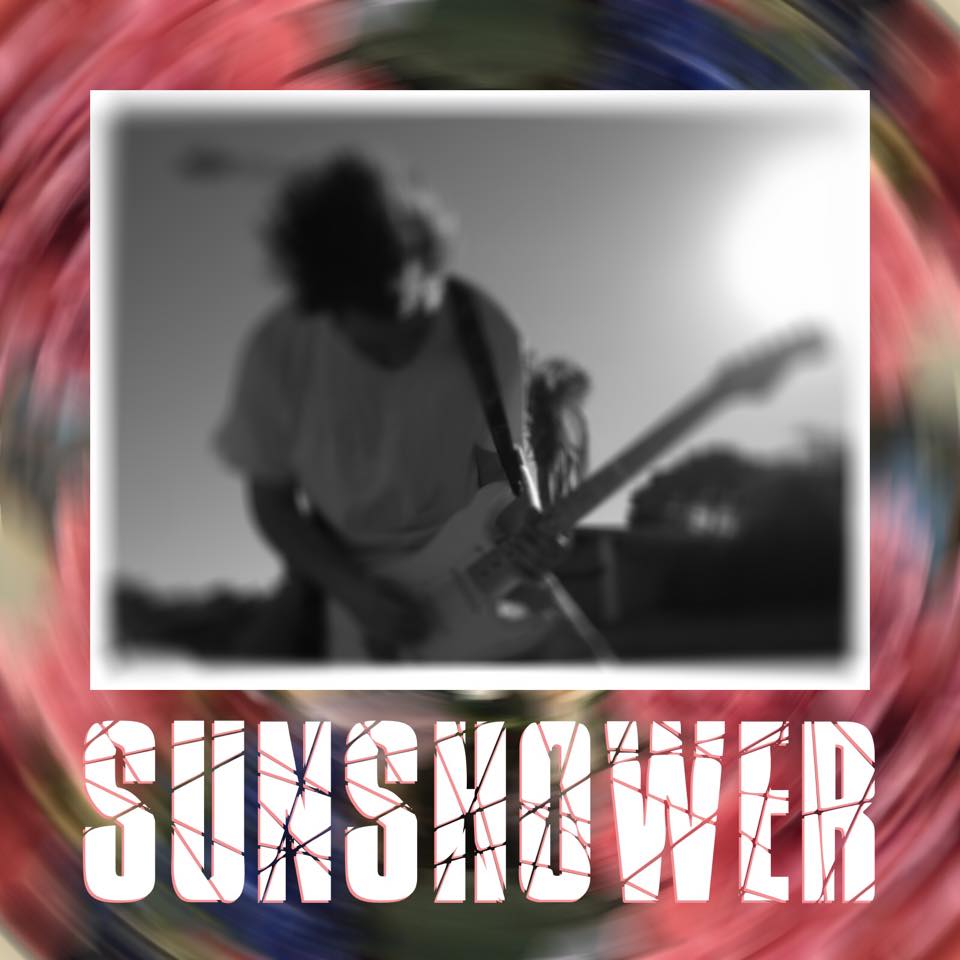 “It has never been like this [in Phoenix], ever,” Hula says. “More venues and bands are sprouting up every day, and they are good.” Well put.

Sunshower will be performing at the Within These Walls festival at The Nile Theater Oct. 29.

The Echo Bombs (The Outsiders)
For fans of: Cloud Nothings, Brian Jonestown Massacre 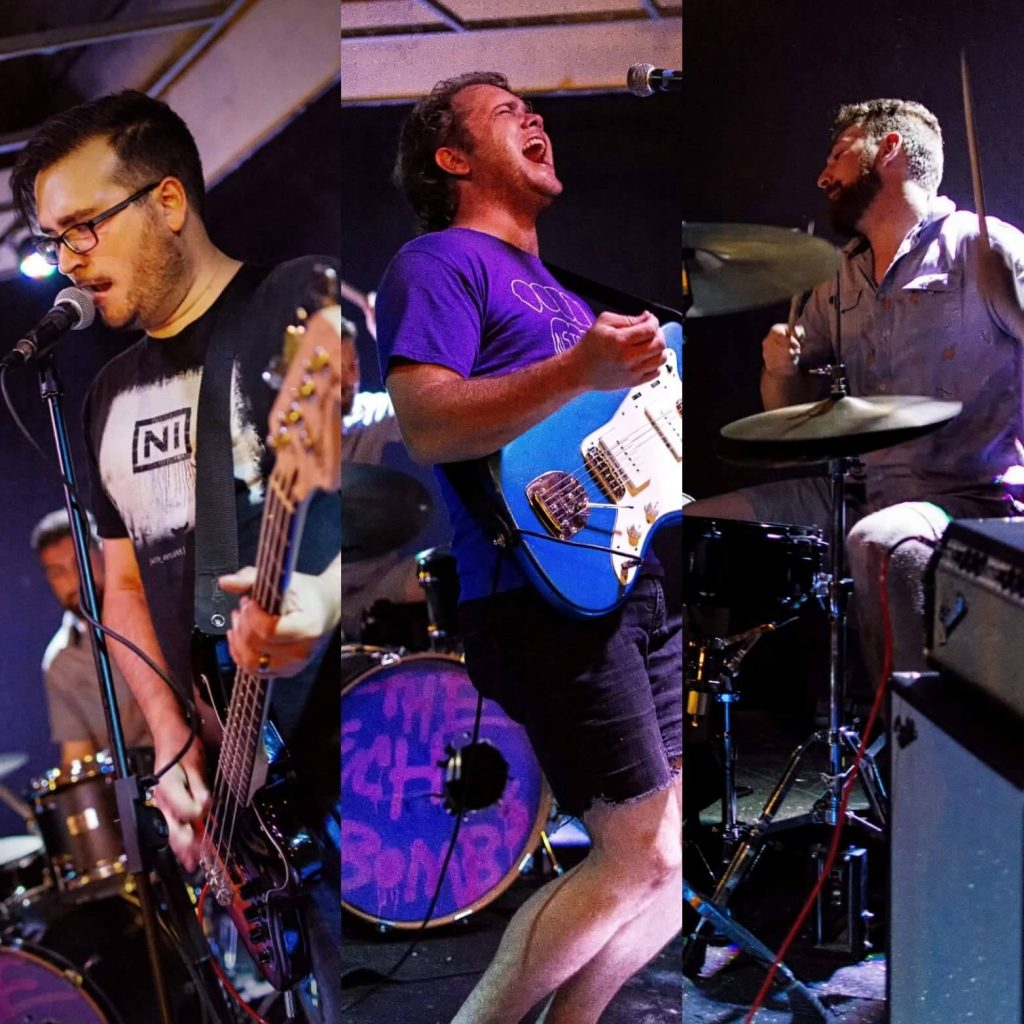 “Music is a matter of passion for us; it gives our lives meaning,” says Eddie Horn, the singer/guitarist at the heart of garage group The Echo Bombs. “It provides us with a medium of communication that is therapeutic.”

I am inclined to agree with his sentiments, especially knowing the kind of racket they can drum up in their live sets. The Echo Bombs, made up of Horn, Daniel Endicott, and Michael Regan, make music rooted very much in the tradition of punk rock, the music of the outsider. Nothing makes an outsider’s heart sing quite like annihilating an audience with a barrage of noise, and when I saw The Echo Bombs make it look so easy at The Rogue Bar, I knew I had found kindred spirits.

King of Uncool, their full-length album, draws out its influences with equal measures of newer groups like Cloud Nothings and Wavves mixed with classic Pixies and the Brian Jonestown Massacre. “Creeper,” my favorite song by the band, is a lurching and jagged hit, odd as that may sound. The Echo Bombs make pop music for serial killers, meaning their songs are catchier than they have a right to be, considering their fascination with distorting every element. It is this paramount priority that makes them stand out: the need to take something merely pleasant and deform it into something new. 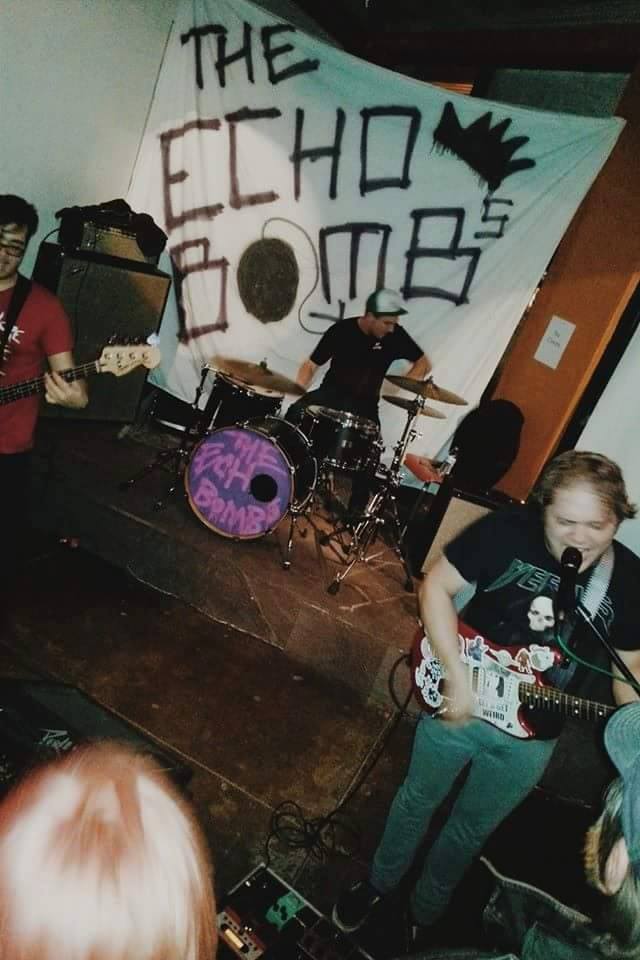 “We can’t pretend to love Phoenix. Our songs ‘Fake It’ and ‘King of Uncool’ are actually about our struggle to find a place—and an audience—here,” Horn says about their relationship to the musical community. The qualities held in high regard by the group are those that entail sacrifice to a muse and eschewing the concept of material gain as artistic validation. “There are a few extremely talented artists in our scene that have shed their ambition for a socially defined success and instead set out to create insightful and personal music,” Horn says. He could apply this to his own work, and the city itself—amorphous and changing, difficult and rewarding.

The Echo Bombs will be performing a costume party-themed show at Rip’s Bar Oct. 29 with the Paper Foxes.