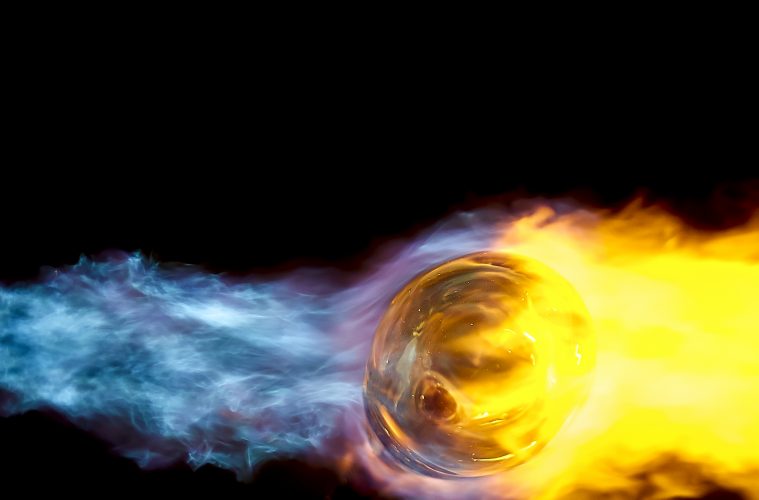 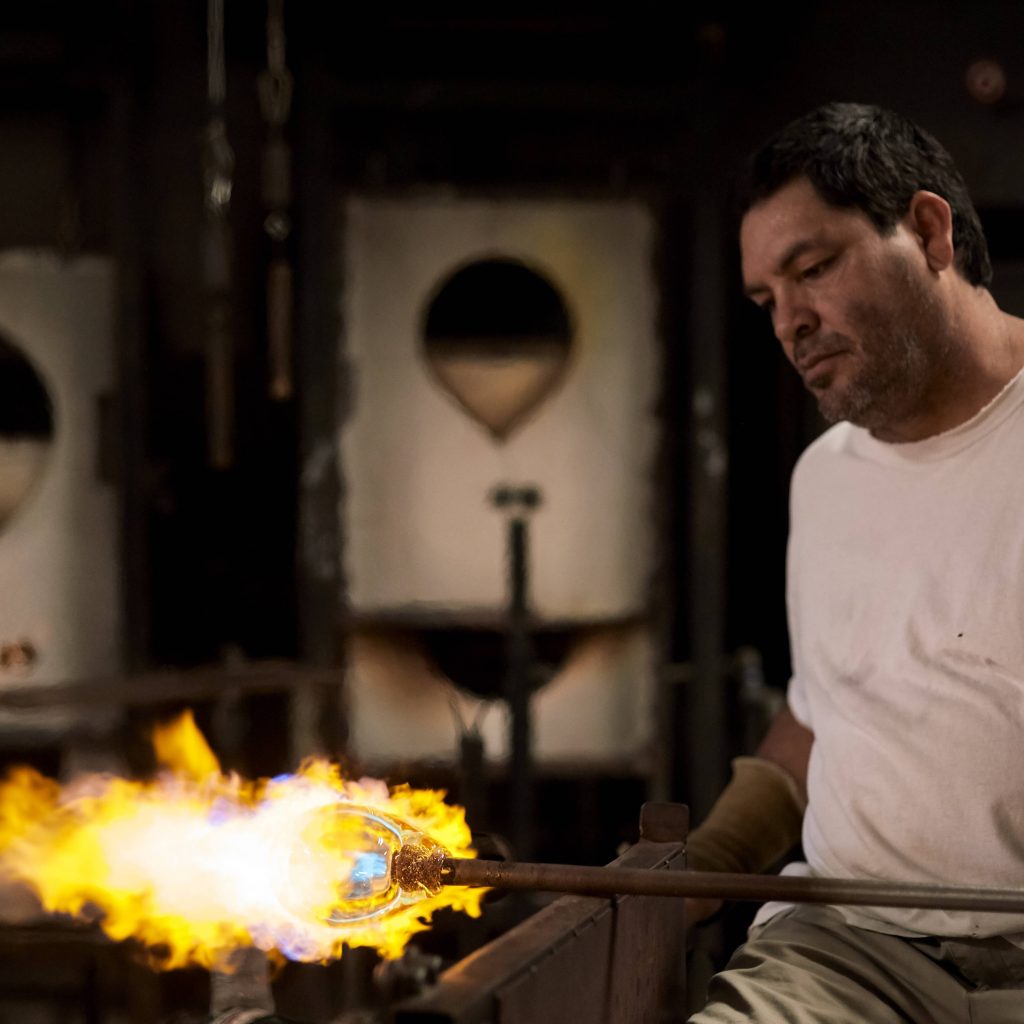 The rectangular opening glows orange and the heat causes the crowd, more than 20 feet back, to wince and shield their faces. It is as if a doorway to the depths has flung open. Specifically to the sixth circle of hell as described in Dante’s Inferno, the one full of fire, brimstone and heretics. This is the “circle six” part of Circle Six Studios.

In front of the furnace stands John Longo, the studio’s founder and owner. Seemingly oblivious to the heat, he works molten glass onto the tip of a metal pole, grinning from under his Steelers baseball cap. Longo is more about process than product. Seeing his face lit up, in more ways than one, it’s clear those aren’t just words.

Circle Six Studios is tucked in the back of an otherwise innocuous strip mall near the 51 freeway and Thomas Road. The front third is a gallery, while the rest is a studio, or, in glass parlance, a hot shop. Longo built nearly every working part, from the furnaces to the iconic red door. He actually learned to build furnaces before he learned glass blowing, knowing that once he had the hardware he could take his time to master the art. That was back around 2004. 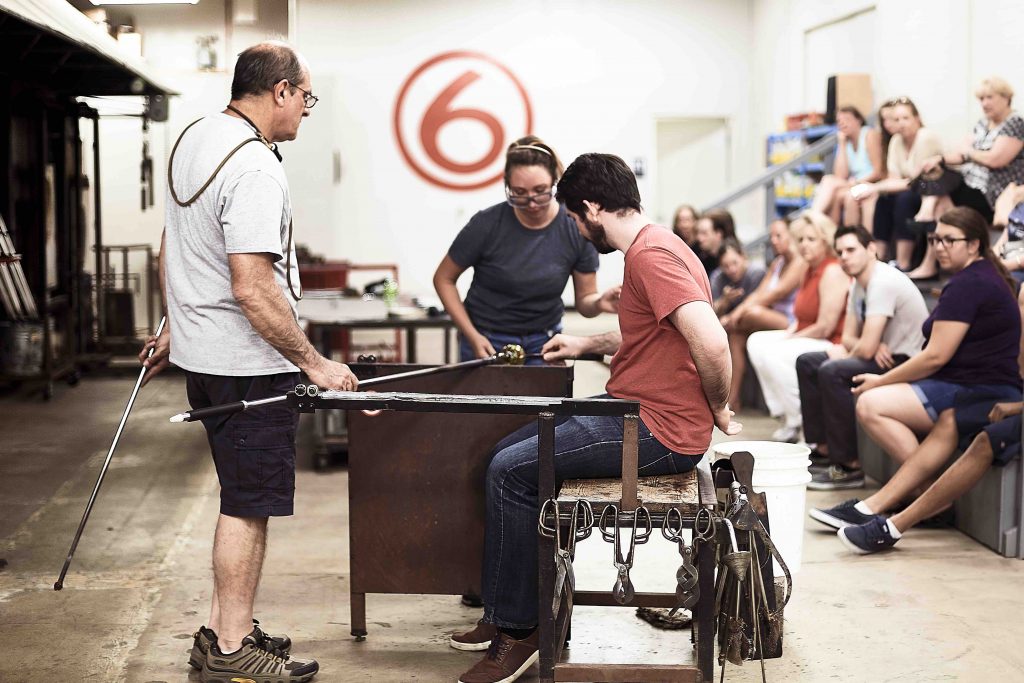 The next year, Longo was approached by artist Rob Traylor, who worked at Mesa Art Center’s glass studio, which Longo had helped design and build. Traylor visited Longo’s then home hot shop. When Longo decided he wanted to expand, Traylor helped out and, before they even had the name, Circle Six was born. By Traylor’s estimate, they have taught glass blowing to upwards of 100,000 students since first offering public classes in 2011. While classes and commissions help pay the bills, supporting artists in exploring the myriad possibilities of glass as a medium seems the studio’s true mission.

Longo is quick to point out that Circle Six is a team effort, with Jason Chakravarty as one of the essential players. When not conducting workshops in Turkey, where he is currently teaching kiln casting at the country’s largest glass and art center, or in Japan, where he was for the 2016 Niijima International Glass Art Festival, you can find Chakravarty working or helping others with their work at Circle Six. With a BFA from ASU and an MFA from CSU Fullerton, Chakravarty is nationally known for his detailed casts and novel use of neon lighting in sculptures. He’s a driving force in spreading the word about Circle Six and has invited talented artists from around the country.

“Glass can be anything,” Chakravarty explained by email. “It is the only material that can be thick, thin, light, heavy, transparent, opaque, hollow, solid, manipulated in so many diverse ways and, initially very important to me, could capture light, aka neon.” Defining himself as an “object maker,” Chakravarty stresses how “personal narrative drives the finished object.” 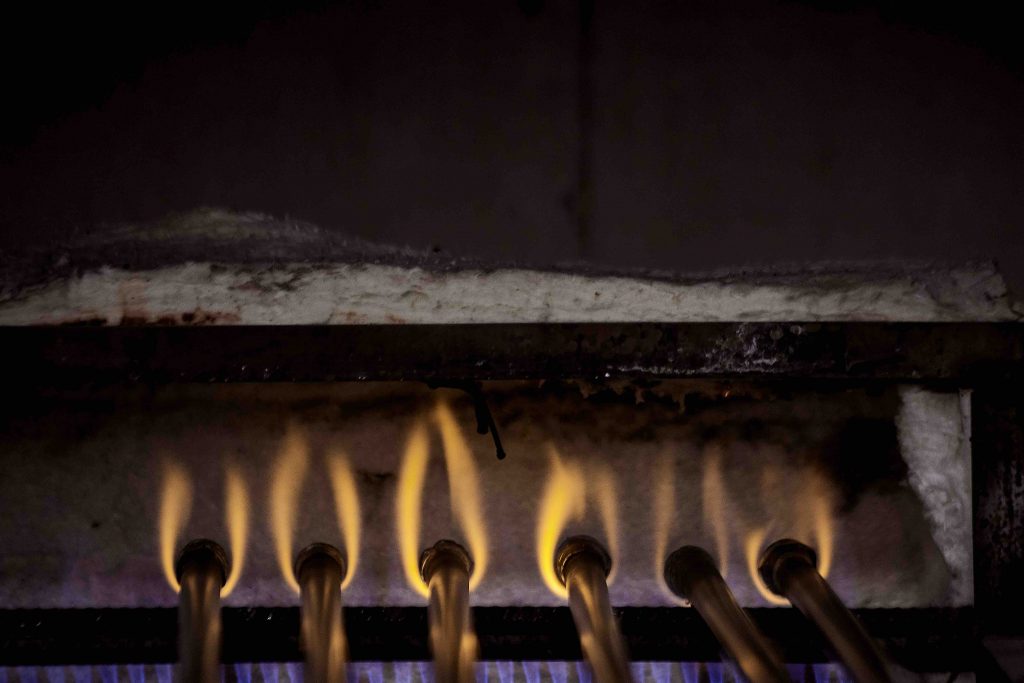 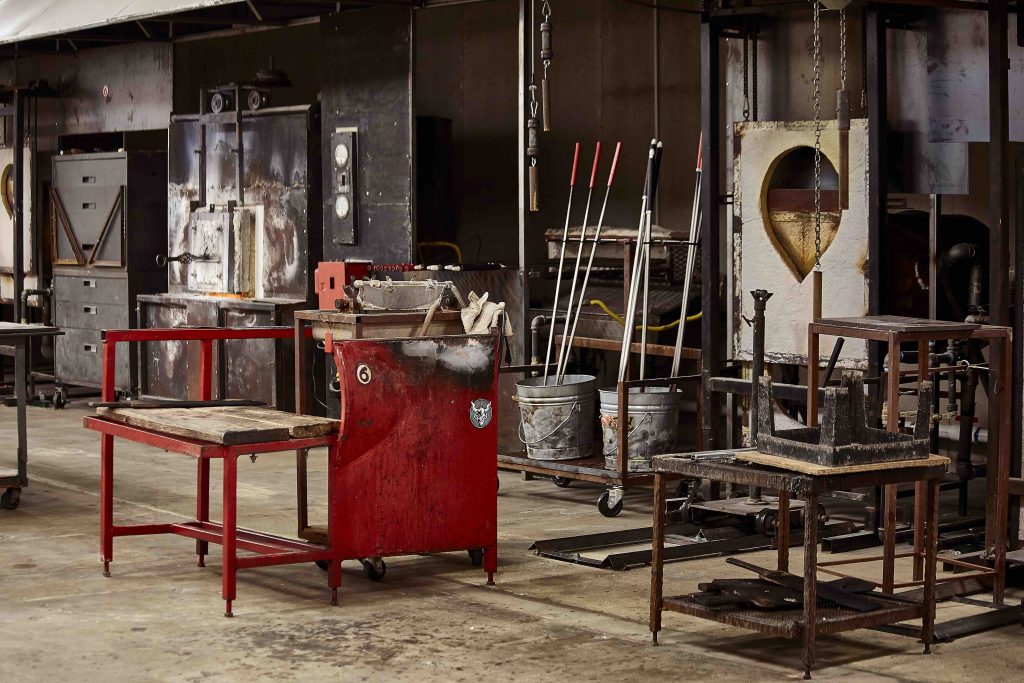 This is the kind of art Longo is most interested in, as well, the kind that is concept and idea driven. While glass art is ancient, the modern studio glass movement emerged from the factories and into smaller-scale studios and galleries in the early sixties. Like ceramics before it, glass fought an uphill battle against parts of the arts establishment that sneered at things perceived as crafty. While glass art has gained wider acceptance, there are still some who harbor such notions.

Clearly, they’ve never been through the gallery at Circle Six, where glass art of a staggering variety lines shelves and tops pedestals. The first piece to draw my eye was a red and blue bust of blind Lady Justice with a building sprouting from her upraised elbow like a neoclassical tumor. Divided Ruling is one of artist James Labold’s works on display. A recent artist-in-residence at Circle Six, Labold holds an MFA from Ball State and recently received the Glass Art Society’s 2016 Saxe Emerging Artist Award. Labold explains that he uses “special blown molds that give a very high level of detail, similar to casting.” For him, the technical aspects are “all in the service of the concept.” Broken into nine red, white and blue segments, the Lady Justice piece embodies the divisions within our justice system and society as a whole.

Chakravarty has work on display, as well. Double Vision depicts a double-stacked billboard being tagged by two detailed, semitransparent spaceman figures. It is a combination of cast and fused glass, with metal components, as well. The spaceman is a repeating motif Chakravarty first adopted when Obama announced his candidacy. He says it was meant to embody “the familiar compounded with the unknown.” Restless Legs is from a recent series Chakravarty produced in collaboration with artist Jennifer Caldwell. One of Caldwell’s famous lampworked octopuses nestles in a semi-opaque coral form made by Chakravarty. They have a whole series of similar scenes at galleries across the country and around the world, some integrating the spaceman’s symbolic cousin, the diver.

The shop is itself a work of art. As you enter from the gallery, tucked to the right are tiered wooden benches for audience seating. To the left is the huge bank of rough but efficient furnaces, work surfaces and the assorted tools of the glass trade. Glassblowing involves the use of three specialized types of furnaces: a standard furnace, a glory hole and an annealer. The standard furnace contains a reservoir of glowing glass maintained at around 2000 degrees and roughly the consistency of honey.

Punty rods or blow pipes are inserted and worked to build up material. They are kept constantly moving to prevent the glass from sliding off. The glory hole furnaces are used to reheat glass for shaping. Circle Six’s unique glory hole design allows one person to operate them. Katy Czarnecki, the newest addition to the Circle Six team, assured me that they are unique and a vast improvement over the others she’s worked with.

On tall metal legs sits the annealer, the third furnace. Usually heated to a mere 800 degrees, it’s used to gradually cool or “relax” the glass and mitigate thermal shock. Between the furnace and one of the glory holes is a horizontal rack of blow pipes sitting with one end engulfed in little flames. These metal tubes are used to blow bubbles into and expand glass. Near the glory holes are a number of kilns for fusing, slump casting and sometimes annealing.

A variety of tools are scattered on work surfaces and benches. There are the diamond shears to crimp or cut glass, used for such purposes as folding a trumpet shape into a flower. There are mashers, jacks and other hand tools for manipulating and handling glass. On one of the tables are the dishes containing “color.” These are shards of glass whose metal content gives them color. Once the desired amount of molten glass is accumulated, the glass blower rolls it in the color shards, which stick to the molten glass like glue. There are shelves and shelves of tantalizing colors stored behind the seating area, a literal rainbow of possibility. 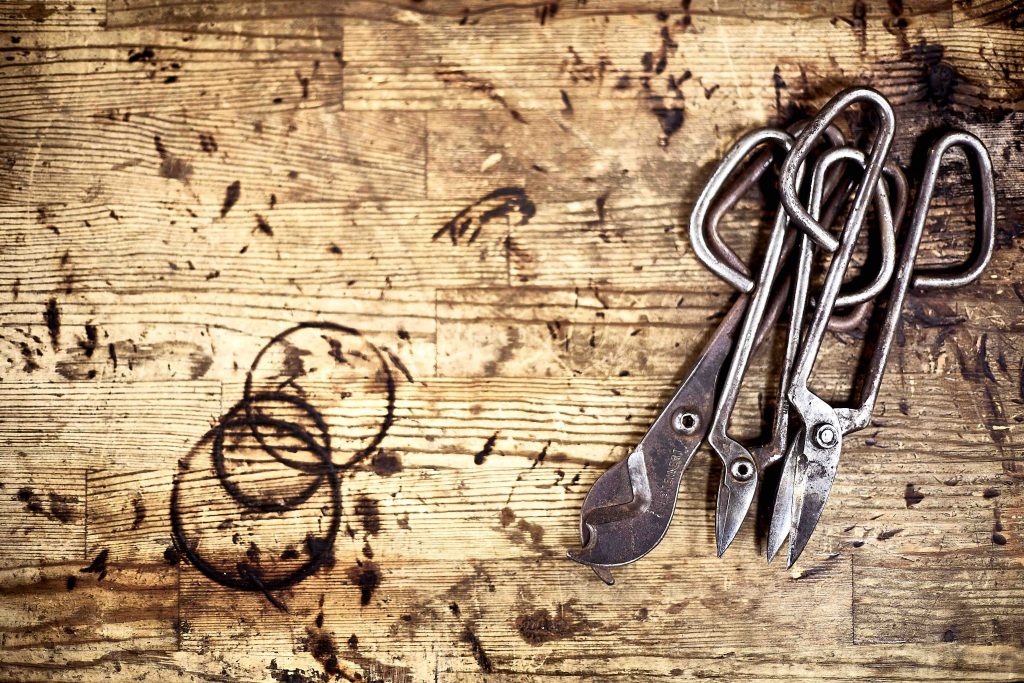 As Longo and a number of the artists explained to me, glass art has particularly high barriers to entry, including the cost of renting facilities and purchasing materials, followed closely by the high level of technical proficiency required. As Longo, in his characteristically direct manner, puts it, “the only way to learn is to fail.” He laughingly recalls the time he hit the wrong button on the annealer and turned a visiting artist’s works into colorful puddles. It’s all part of the process: trying, failing and learning.

Katy Czarnecki, a recent Temple University graduate, moved from Philadelphia around four months ago to begin working with Circle Six. Czarnecki met Chakravarti at a workshop in North Carolina and, as she puts it, “stuck to him like glue.” She describes her art as “really creepy body stuff.” Working daily in the hot shop surrounded by experienced artists, she’s quickly refining her style and perfecting and expanding her skills. Czarnecki enjoys how Circle Six creates work that is experimental but still able to “get out into the world where someone will hopefully buy it.”

Quick to deflect attention toward his fellow artists, Longo did show me a couple of his pieces. Interested in balance and perception, his recent work has what he describes as a “molecular feel.” In one piece installed at the Liv North Scottsdale apartment community, a large number of glass spheres of varying patterns, colors and sizes amble along a curved metal course. They felt very planetary to me, possessing an absorbing visual depth unique to glass. Most of Longo’s work is on commission, and he also works in stained glass. 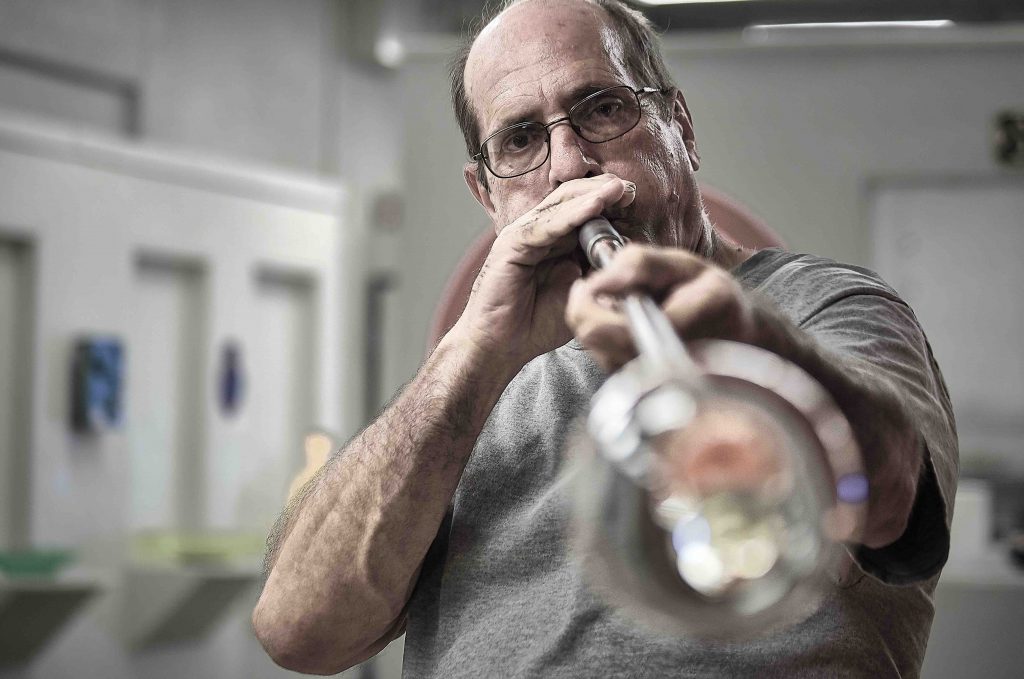 Whether you’re interested in trying out glass blowing or seeking a unique piece of art, Circle Six Studios is a unique community asset, dedicated to pushing the limits of glass as a medium. Just remember to bring a sense of humor when you visit, because the one thing definitely not allowed is an attitude.

Every First Friday Circle Six Studios opens their doors and celebrates with a keg from a different local craft brewery, as part of an art exchange. 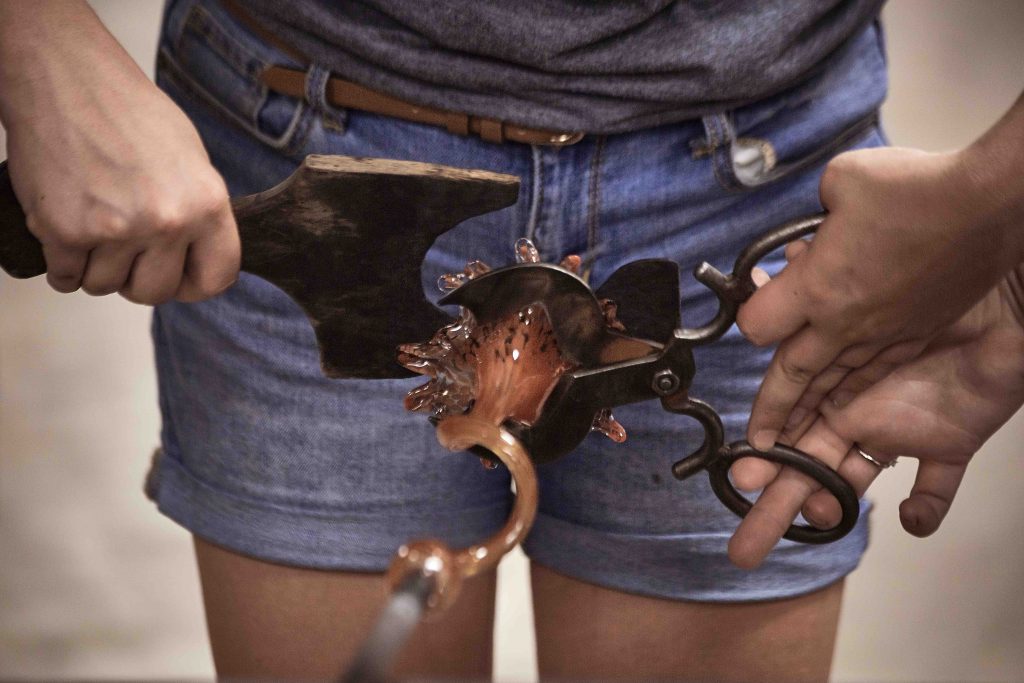 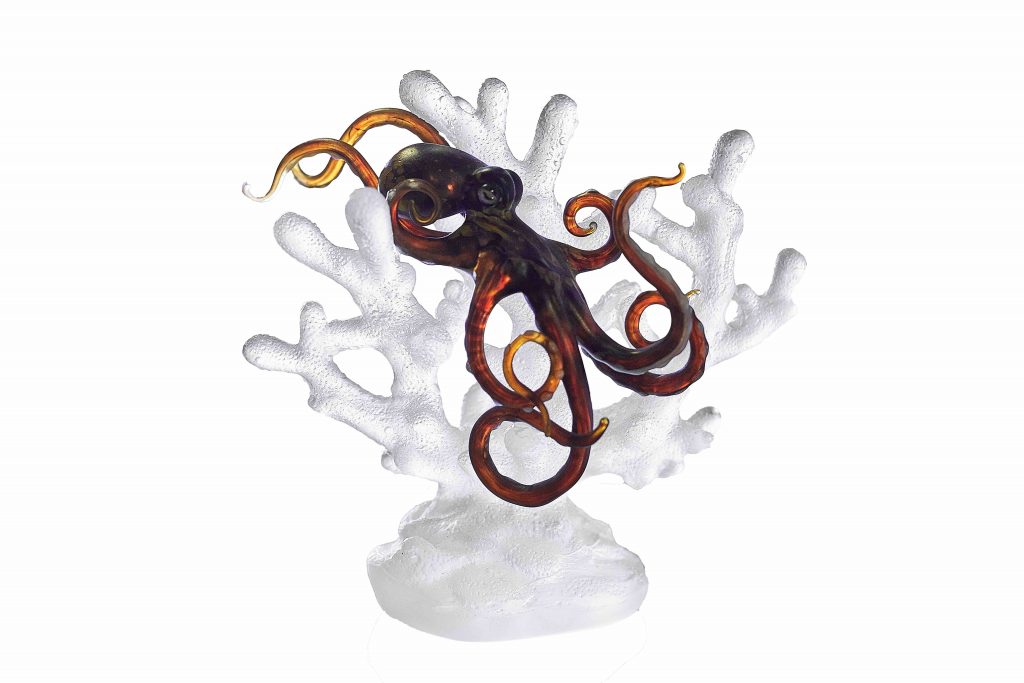