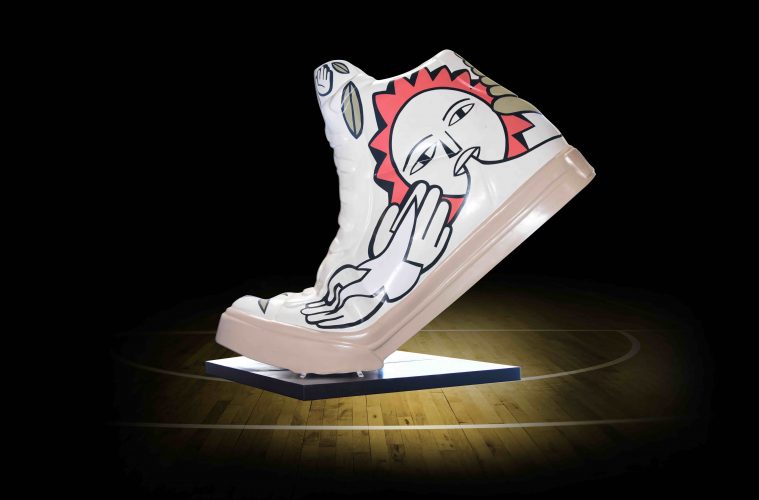 The Sole of PHX: Artists Celebrate 50 Years of the Suns 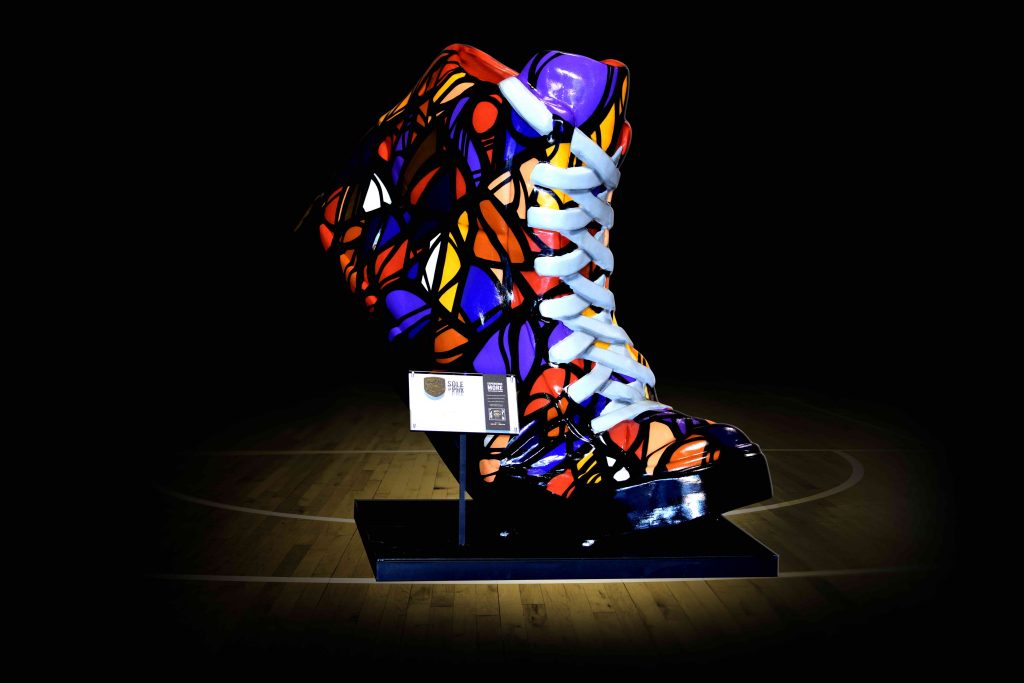 It’s funny that the greatest musical artist and the greatest athlete of our time peaked at the same moment and were both named Michael. Jackson and Jordan defined legacies in pop music and basketball, respectively, to galvanize people everywhere.

Basketball is an art form full of rock stars pulling on gravity’s rainbow with every dunk, crossover and spin move. It is a series of coordinated gestures punctuated with machinations of grace, charisma and sheer athletic magnitude that has become synonymous with a lifestyle. In that sense, basketball players are artists, and their canvas is brown and striped.

In a calculated effort to capture the undeniable synergy between the NBA and art in general, the Phoenix Suns have launched The Sole of PHX, a creative partnership with many artists brought in to paint oversized (8′ x 6′ x 3′) high-top sneakers for an exhibit spread throughout the city. The project embodies the artistry and vision of basketball and the keystone moments in Phoenix Suns history. 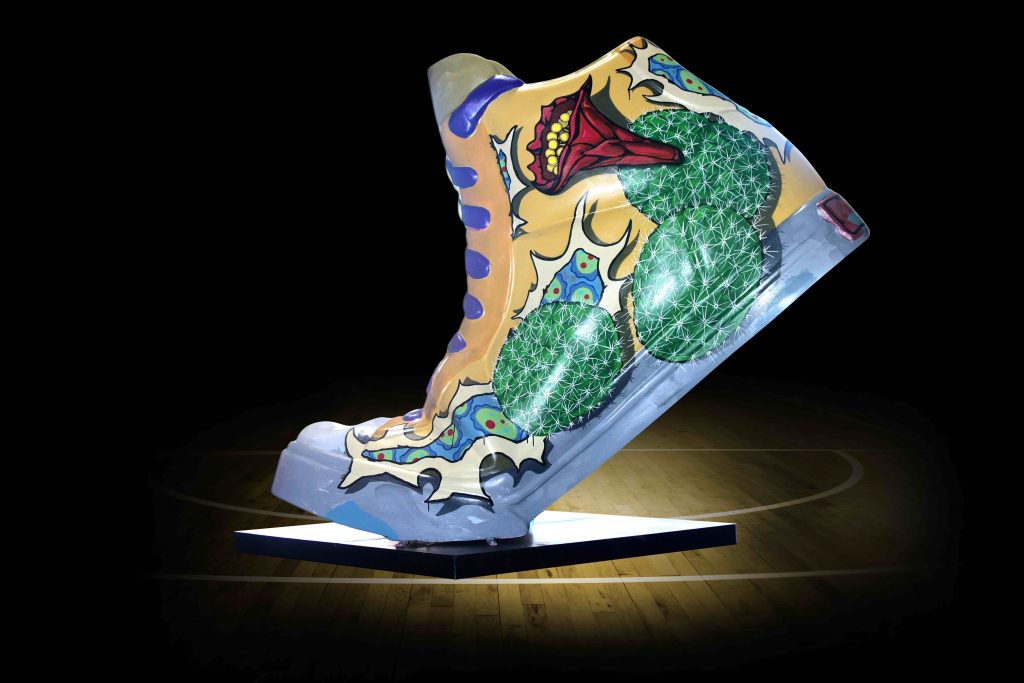 The Sole of PHX includes a legion of local and regional artists and is a fun, interactive way for the community to mark the Suns’ 50th anniversary celebration, from the arena and into the streets. The 15 Suns-inspired art pieces will be displayed all around the Valley throughout the Suns’ 2017-18 golden-anniversary season.

The list of participating artists and their sneaker locations includes:

The Fortoul Brothers, Gabriel and Isaac, having just completed their duties as official artists for the Lost Lake Festival – with their bold graphic works emblazoning all sorts of festival swag, including the monumental banners surrounding the stages – have two sneakers in The Sole of PHX, “Fire of Life” and “Desert Flame.” Both celebrate the glowing orb that brings its fierce magic to the desert and its people. “We cycle and elevate like the sun.” Indeed, these artist brothers are on the rise with a number of national and international projects in the works. 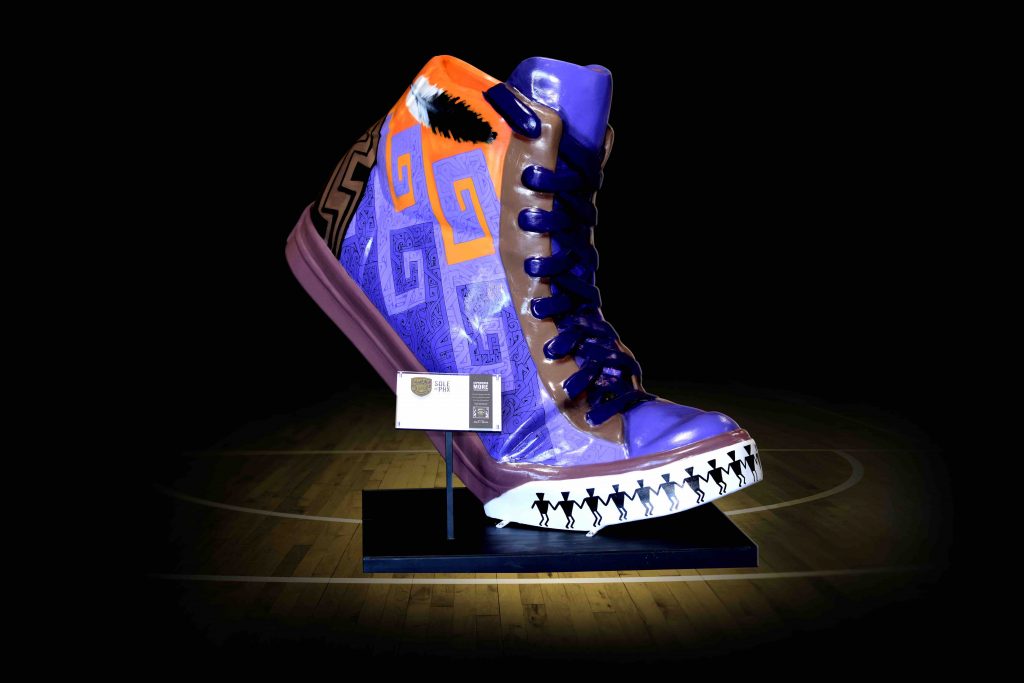 Native artist Thomas Breeze Marcus is really excited about his sneaker. “I am honored to be a part of this project for the Phoenix Suns’ 50th anniversary,” said Breeze. “I am even more thankful that I was able to create a piece of art that specifically represents the original tribes of the Valley, the Akimel O’odham of the Gila and the Salt River communities, which is where my families are from, including the Tohono O’odham Nation of Southern Arizona. The Phoenix Suns will always remind me of my grandfather, who was a huge fan of the team and would even sit in his truck to listen to the games if they weren’t on TV.”

Another Phoenix-based muralist and rising art star, JB Snyder, produced a sneaker titled “Fragmented 50” with his classic geometric designs and vibrant colors. In this case, Snyder integrates the purple and orange palette from the Phoenix Suns franchise into his signature grid of continuous lines and hidden imagery, helping to successfully bridge the gap between the Phoenix art underground and the corporate sports franchise. 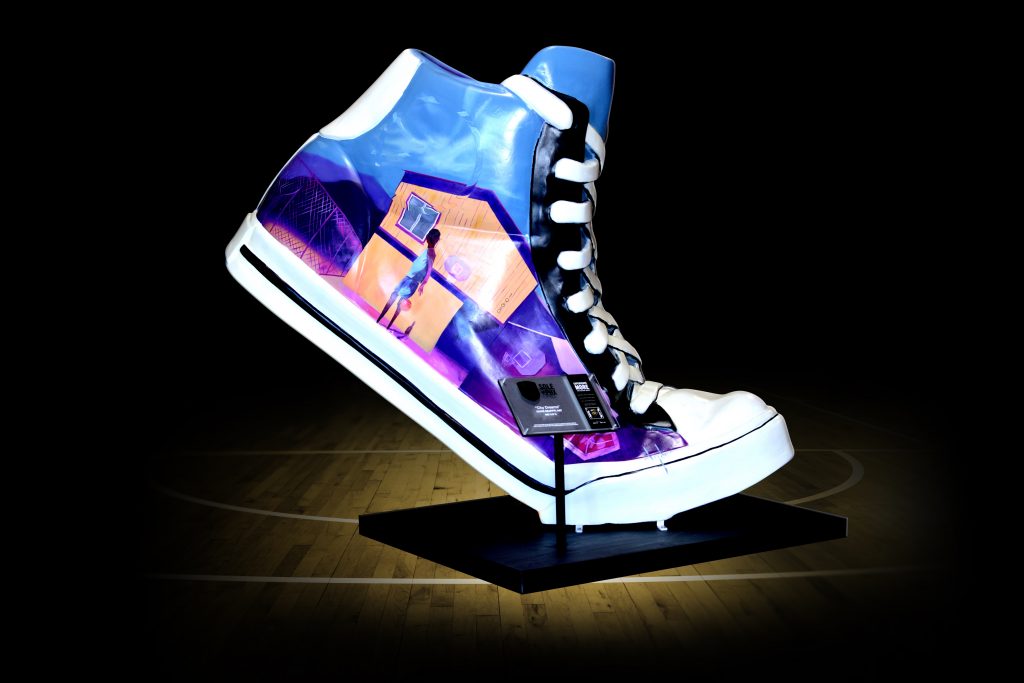 Bill Dambrova is a native Arizonian artist who lived and worked in Los Angeles for 10 years. “I was really into the Suns when I was a kid in the ’70s, so I wanted to honor that time period with the colors and a riff on the logo that they used back then,” he said. Dambrova got into art at an early age, and for him shoes were an opportunity for personal expression. “My shoes were painted different colors and had names of punk bands written all over them, and there were rips and holes in the canvas where my crazy colored socks would poke out,” he recalled. His piece for the exhibit, titled “Jumper,” depicts a well-worn and loved shoe that pays tribute to the Suns and to the prickly flora that abounds here.

The sneakers in the exhibit have an interactive dimension that allows visitors to use the Suns app (newest version is required) to scan the plaque and unlock content and prizes. Prizes include Suns tickets, 50th season rewards and discounts at the Suns Team Shop. Fans who scan 10 sneakers will receive two lower-level tickets to a Suns game, and those who scan all 14 (Luke Air Force Base is excluded) will be entered into a chance to win a pair of courtside seats to the Suns matchup against the Golden State Warriors on Sunday, April 8. 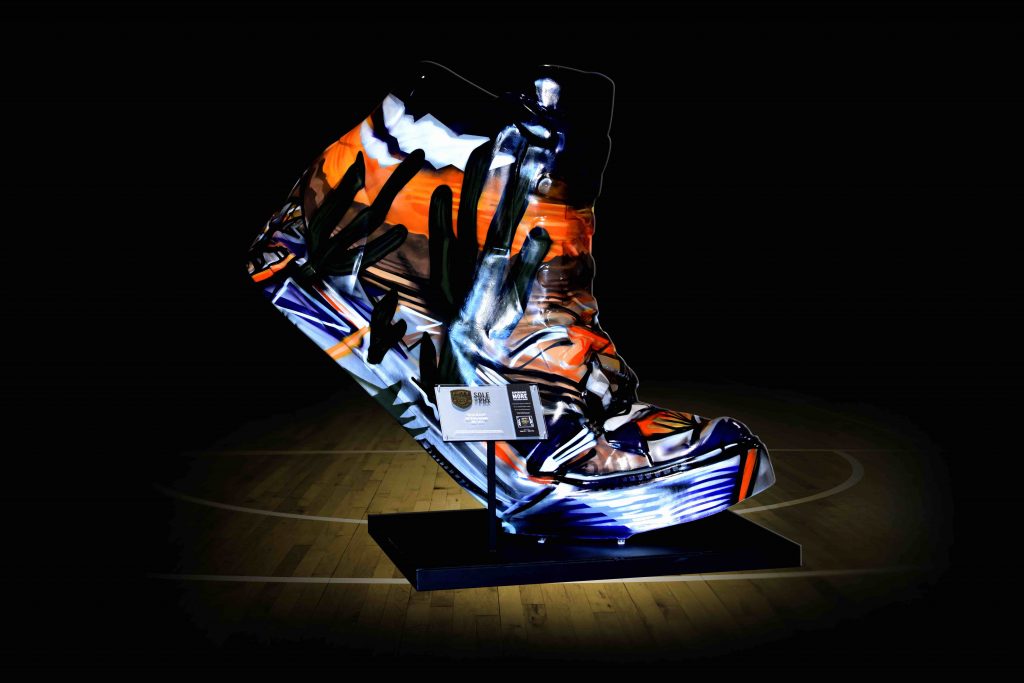 Following the 2017-18 Suns season, the sneaker art will be auctioned off with proceeds benefiting Phoenix Suns Charities.