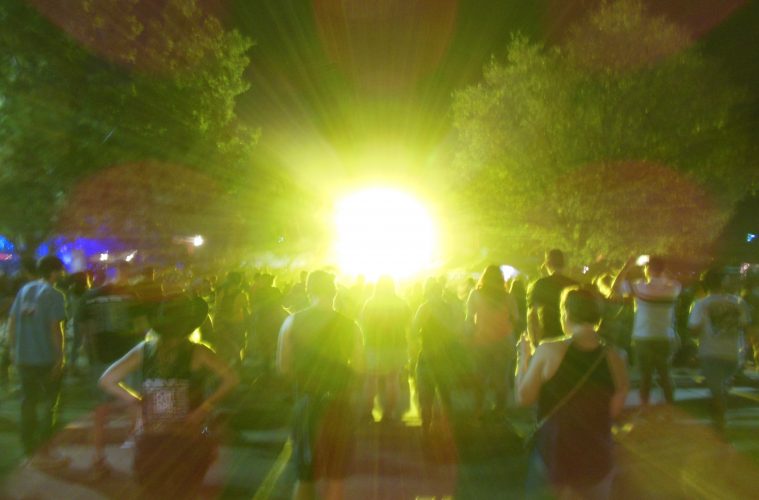 I approached Day Three of Lost Lake Festival in a different way. The first two days I had specific agendas that included specific artists and entertainment necessities, and while that’s how Sunday was going to end, I decided to flow with random whims and finding friends for much of the day. I wanted to bounce between as many acts as possible, get a real vibe for the crowds and see absolutely as much as possible. It was a solid plan and it made for a fantastic final day at the greatest Arizona musical festival I’ve seen over the last 19 years of living here. That’s not hyperbole or exaggeration, I fancied making that declaration after Friday night, and knew it was true after Saturday, but you got to let these things ride their entire course for full perspective. 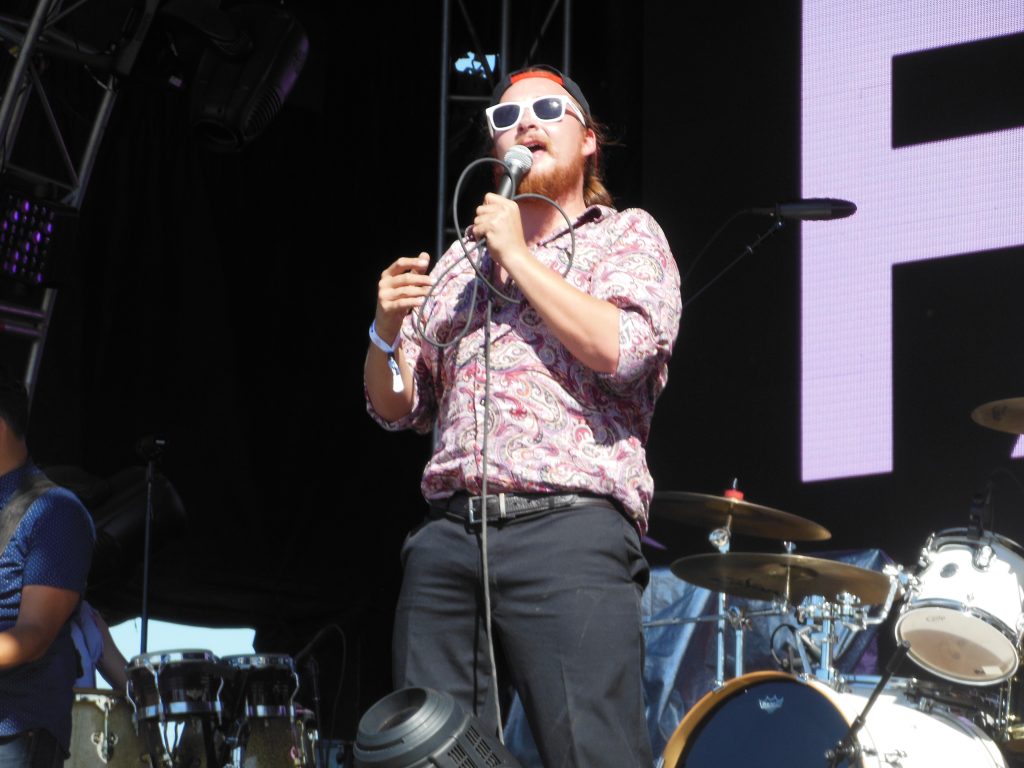 One thing of note, it was scorching hot at the start on Sunday and that was slightly unexpected. One fellow journalist’s phone cut out from the heat, my camera kept shutting down and artists were stunned by the sun. I got there in time to catch most of the opening set by local faves Fayuca at the Camelback stage and plenty of shade was still available, which was the only saving grace for musical enjoyment. Fayuca was fantastic as ever, but it’s been a while since I’ve seen them with Danny Torgersen (Captain Squeegee) full integrated into their road show and I was surprised when he took lead vocals for a tune. I raged to my favorite, “Por Que Seguir” over a Maya Mocha cold brew from Gypsy Cup, who had essentially become my sponsors for the weekend. 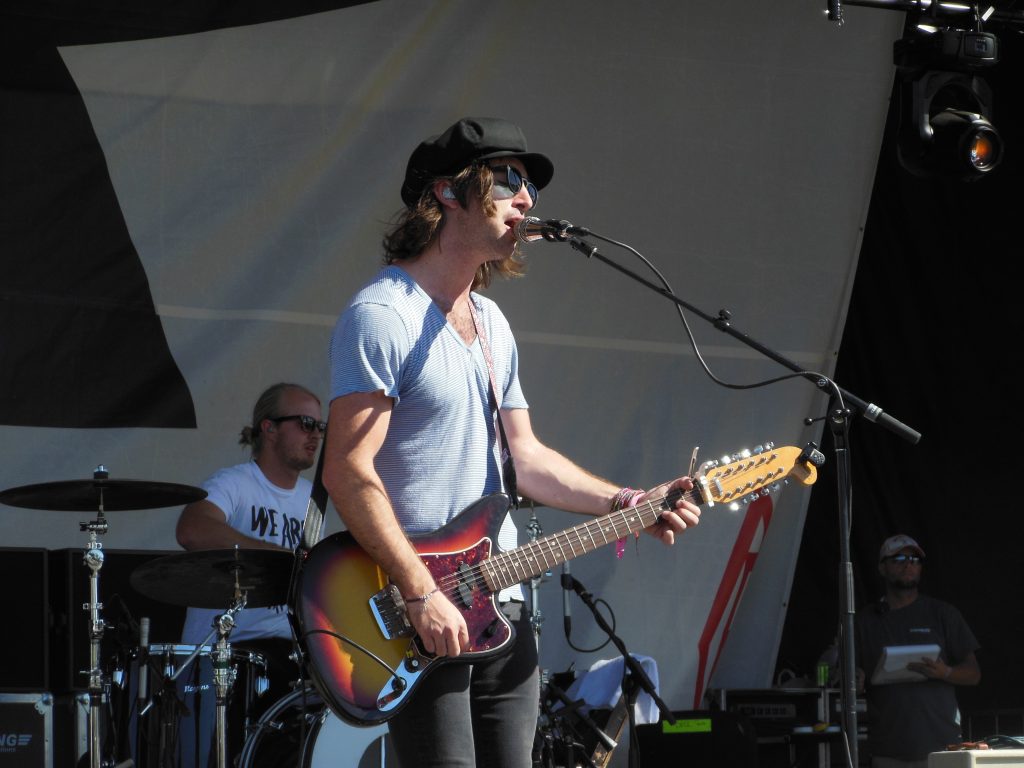 I wandered over to the Echo stage to catch some of The Shelters. The previous night I had seen two of them join the Dap Kings Beatle extravaganza and was suitably impressed. They’re a pretty straight forward American rock band and I noted that I need to pick up their debut album from last year, because I definitely dig their vibe. Half of the band had played on Tom Petty’s Hypnotic Eye album, so it seemed fitting that they paid tribute to the late legend and gave a stellar performance of “Scare Easy.” As the heat beat down on the grounds, the crowd began to fill in anyway and it was clear the temperatures were not going to keep the Phoenix fans away on Sunday. 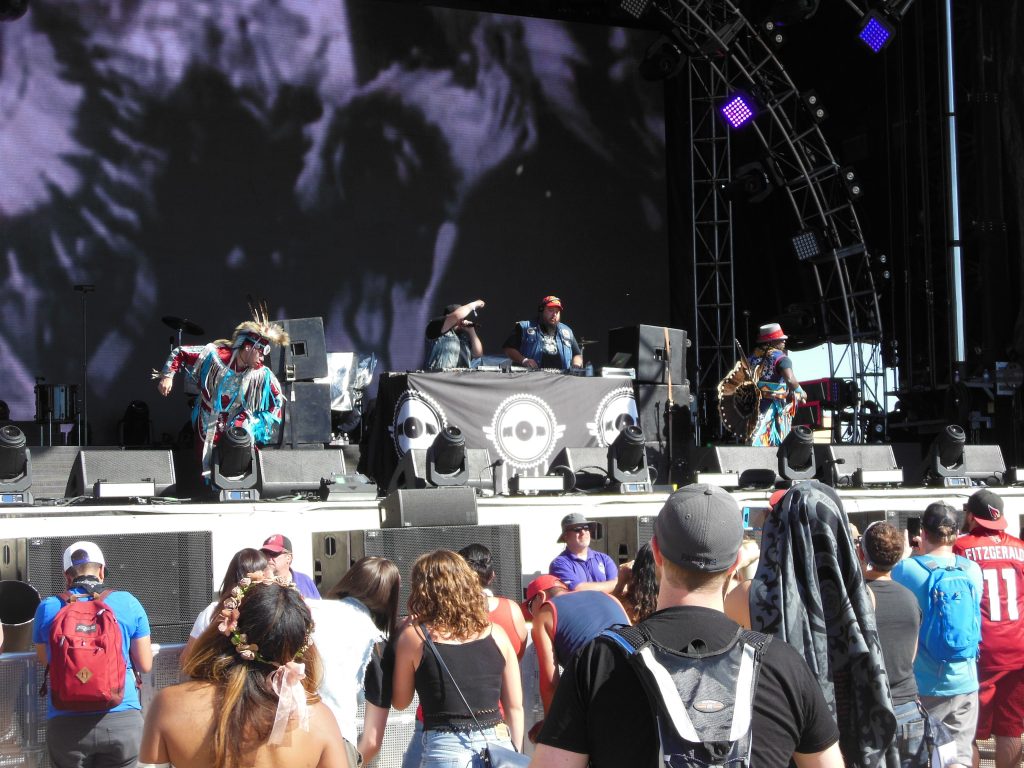 Next up was A Tribe Called Red, the first of many DJ sets of the day and my favorite, if not objectively the best. The big emphasis on Sunday’s lineup was dancing and lots of it at all times, A Tribe Called Red were the first to kick this vibe off at the Camelback stage and I could not tear myself away from beginning to end. It was completing engaging and hypnotic as we baked in the sun and lost our minds only slightly. After A Tribe Called Red, I needed more beats and in the end Murs was there for me. He put on a fantastic that went all too quickly, but it was easily one of my favorites of the day and I only wished more people were there to see it. “Two Step”, “Pussy and Pizza” and “Remember 2 Forget” were highlights of a flawless set in the harsh desert sun. 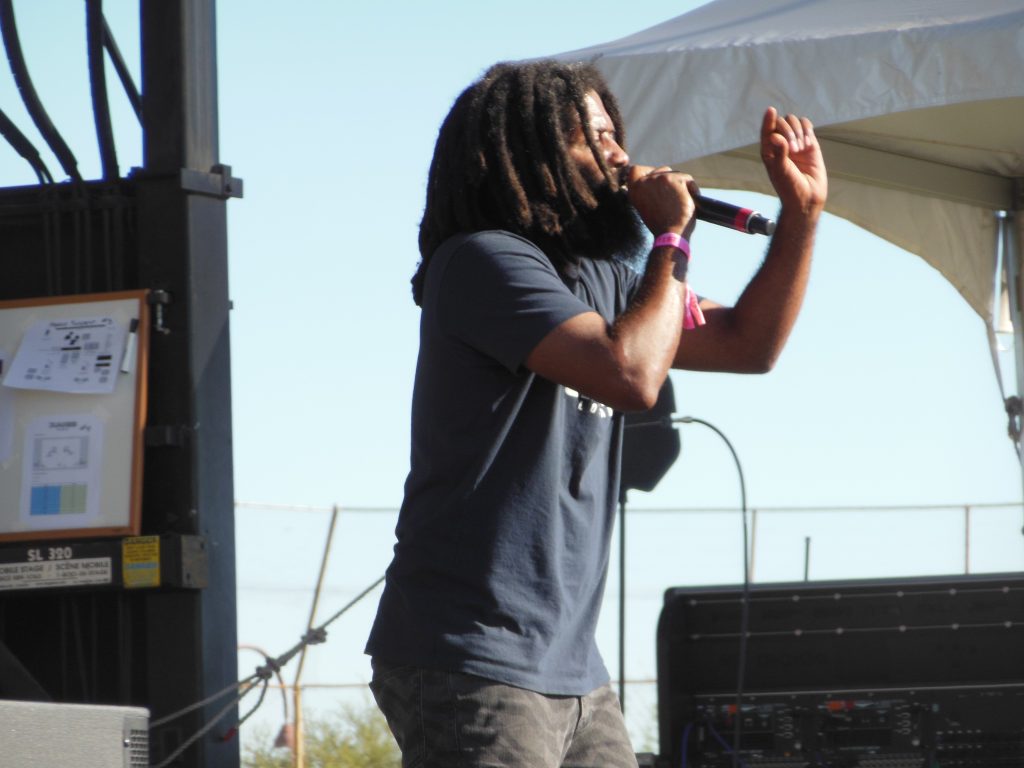 I spent much of the afternoon wandering through sets by Futuristic, Snakehips, Highly Suspect–the latter of whom I think I would have enjoyed with all of my heart and soul any other day, but that day in the park I was all about dance music and hip hop and wanted to get back to it. Danny Brown did the trick for that and did it perfectly. Still riding high from last year’s Atrocity Exhibition, Brown’s set was another stand out performance in a day filled with them, during a weekend of mindblowing moments. The crowd was filling in as the afternoon heat abated and the vibe was friendlier than ever. After his set much of the crowed headed to Piestewa stage for Big Gigantic which seemed to be attracting the first overwhelming crowd of the day. 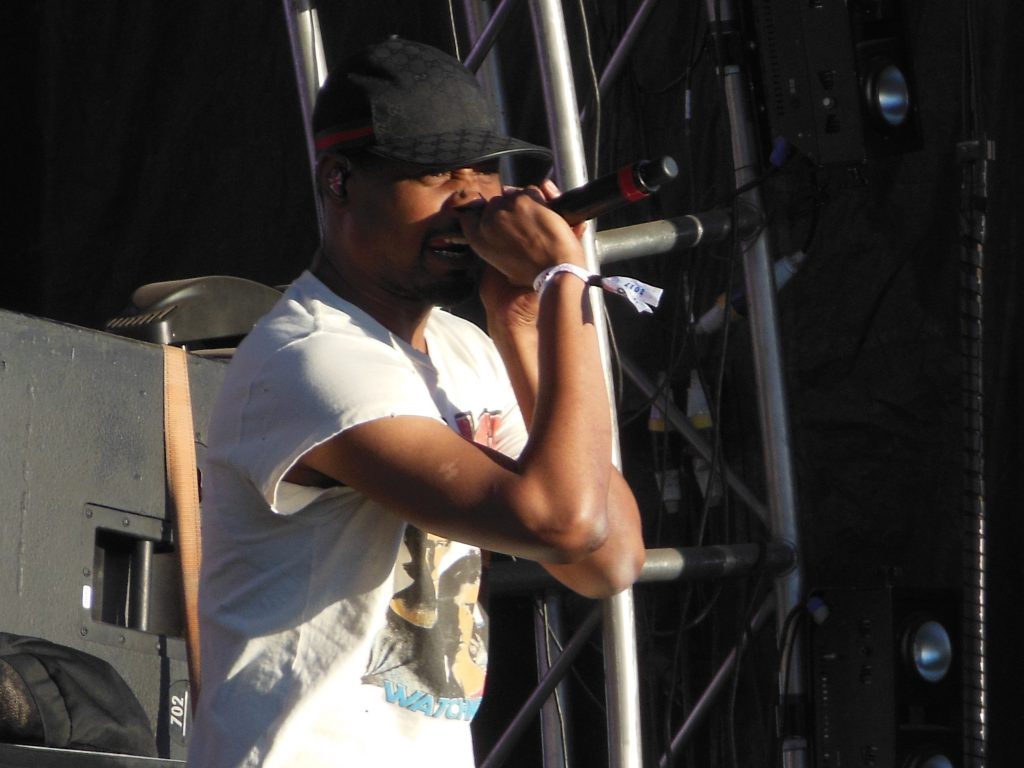 I knew I was going to need fuel for the next four hours and I scored a House Made Mozzarella and Tomato Sandwich from Chris Bianco’s stand and it was well worth $12 for the size alone, much less the generous portions for a perfect Caprese. I also got a Bourbon Vanilla Nitro from Gypsy Cup and it was the most delicious flavor yet. I was locked and loaded for the final three acts of the festival, a succession of acts I had been looking forward to from the start: Run The Jewels, Major Lazer, and Odesza. If that didn’t make it clear that Sunday was about shaking your ass, I’m not sure what would and the great thing was that everyone was dancing.

After the first two nights I was wondering which act was going to deliver the all out transcendent set, like Chance the Rapper on Friday and The Roots on Saturday. I half anticipated that it was going to be Run The Jewels. Unfortunately, sound issues plagued their set early on and for the first time in the entire festival the sound was off balance with the bass obscuring the lyrics through half the set. Don’t get me wrong it was still a hell of a jam and for some this was THE set of the night regardless of any issues. The second half of the set when everything was balanced out was downright ecstatic. 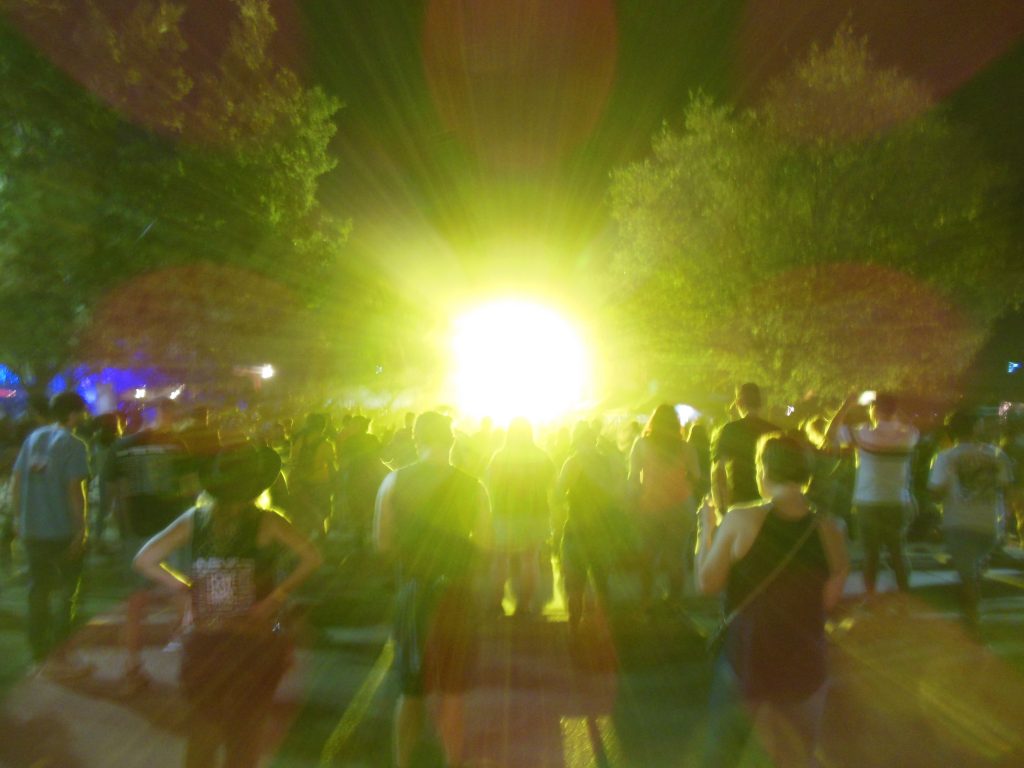 Major Lazer wasn’t going to provide me with the ecstasy I was seeking for the sheer size of the crowd that completely overtook the field in front of the Piestewa Stage, the field was filled, and spilled into the parking lots, the causeways and nearby hillsides, it was a rave of electronica madness in epic proportions with a light show that couldn’t have been more impressive. To have been in the thick of that crowd dancing, perhaps slightly altered would I imagine, have been a peak experience for the weekend. By the time I had corralled my friends to the set, the crowd was already prohibitive. If you were looking to put a little more dub in your step for the weekend, this was the places to be. 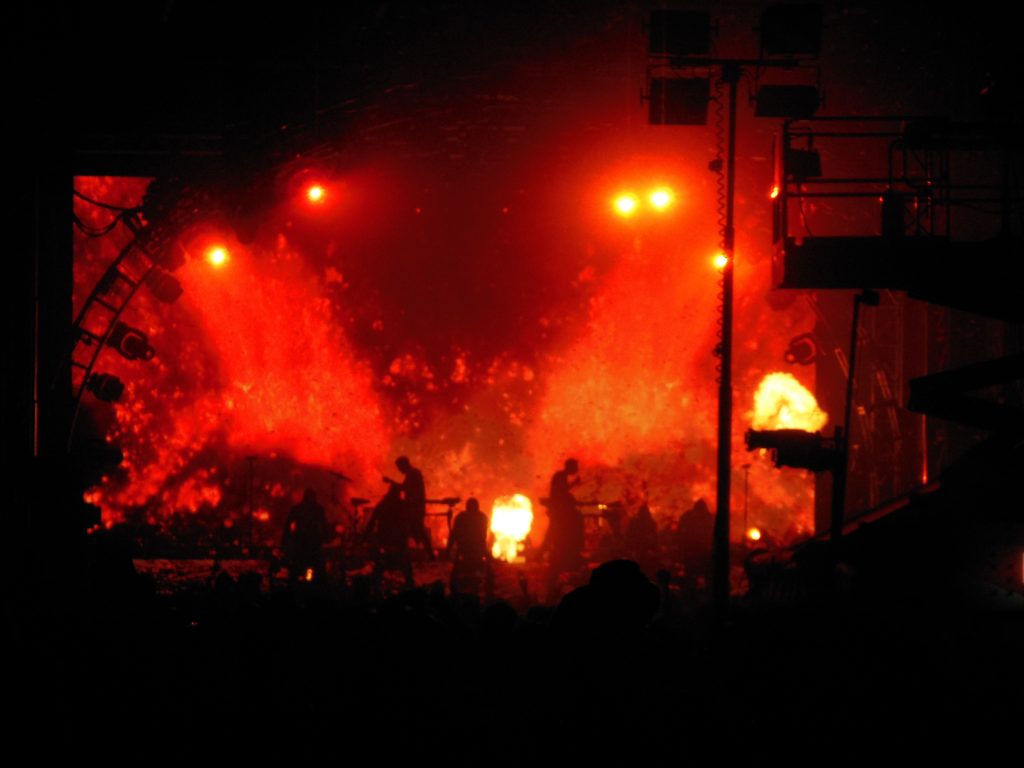 As soon as Odesza began their laser light extravaganza I knew this was what I was waiting for, an hour and a half extravaganza of brilliant visuals, stunning dance music and a great vibe that extended across the entire crowd. It was the perfect finale to the perfect festival in all honestly. Like Chance the Rapper and The Roots from the previous night, Odesza brought an overwhelming tone of positivity, high energy sounds that somehow soothe your soul, as apt for dancing on a giant field and getting out of your head as it was to lay on a hillside and stare into the lights with the ground thumping into your consciousness. It was a surprise set to be sure, but at this point it’s pretty clear Superfly knew what they were doing in the ways they arranged each evening. Odesza brought out all the big guns in both sound and vision for an epic length set and it capped off the electronica themed final day briliantly.

As the festival closed we made way to the exits, stopping by the lake itself to watch the fireball show set to Prince’s “Purple Rain” and a fantastic finale was made that much finer as they shot fire into the night sky until all of the fuel was gone. We walked to the streets, still reeling from all we had done and seen. Lost Lake Festival was an astounding success on every level, every day of the event–and if there were acts that you didn’t fancy, there were tons of other things to do, sites to be seen and local concessions that were both affordable and out of this world delicious. That said, the lineup was amazing and life altering at times if you just let yourself go and get into it and the entire weekend, the crowd consisted of super people who were there to have a good time to some great music, nothing more, nothing less. Every was beautiful and nothing hurt, except maybe your feet after running this fest hard for three days. Simply put Lost Lake Festival is the single greatest festival event I’ve experienced in Arizona over the last 19 years.  Period.