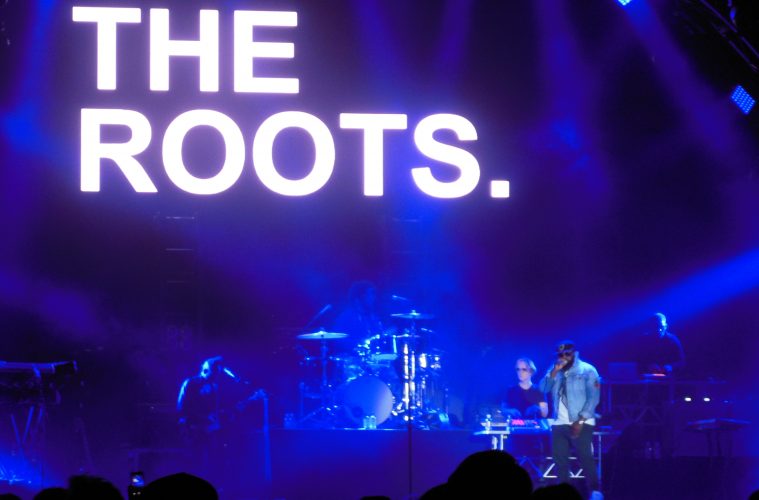 After the first day of Lost Lake Festival I was left with my mind blown and my spirits raised by such an amazing debut for this new event. Saturday I awoke ready for more, thoughts of Chance the Rapper’s set still on my mind from the night before. I wasn’t sure if anything could top that experience for the rest of the weekend, but I was more than willing to test that theory out. One thing was for sure, now that I had the layout of the festival down, I was going to take to wandering more and if I learned anything from Friday, I was going to have to eat some more–purely out of survival. While the temperature had dropped slightly, the humidity soared and I didn’t realize that until I was on my way. The first half of the day was going to be hazy, hot and humid, and even the media tent was going to provide protection from that. 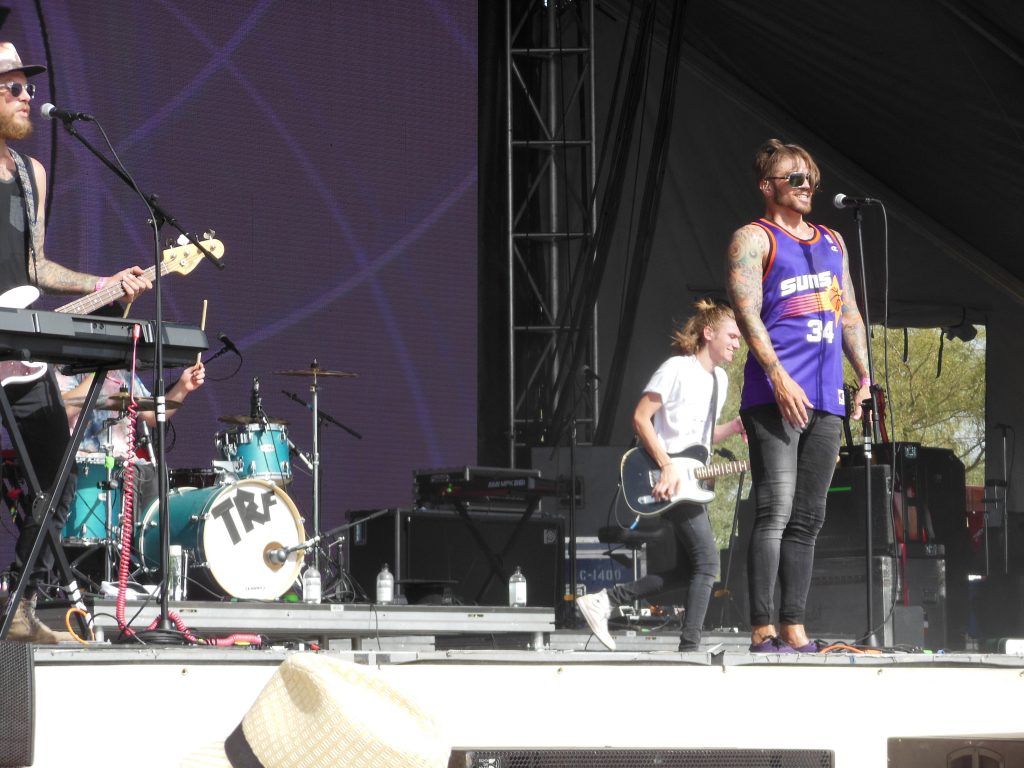 There were some necessary changes with the schedule for Saturday, sing JR JR had cancelled their tour, so I knew the changes were going to make. I got their in time to catch The Ricky Fitts, the local band voted into the festival by their friends and fans. I actually walked right past them, thinking the band on the Piestewa Stage sounded just like The Ricky Fitts, but they were supposed to be on the Echo stage. This simply allowed me to walk the grounds, get a much needed Maya Mocha Cold Brew at Gypsy Cup–the amazing purveyors of coffee for the festival, and head back to the band who were in fact The Ricky Fitts. They had a great set that you could hear across the entire layout, so I didn’t miss anything, I just had a great soundtrack to my travels. Once I got back I could enjoy the rest of their set in the hazy sunshine. They finished off their with their fantastic single “Nightmare”, after which I heard one unfamiliar journalist say, “Wow, I had no idea they were that good.”

I wandered through sets by Frenship and Carlar Morrison as I went about exploring the marketplace area I had missed on Friday, as well as checking out some of the amusements I had missed the day before. I wanted to immerse myself in the festival, so I played some Big Ass Billiards, laid in a hammock, and won a game of Lifesize Connect Four. The layout, it should be mentioned had moved off the map a bit to be even more convenient for the attendees–the changes were subtle, but helpful. It was time to grab a Pumpkin Spice Nitro from Gypsy Cup and head over to catch Chance the Rapper’s little brother.

After a good fifteen minutes of a DJ introducing him, Taylor Bennett took the stage and rocked everyone’s world who were there to witness it. I’ll admit I had no idea who Bennett was before the festival, but he made at least one new fan, and I suspect many, many more during yesterday’s performance. His flow was ridiculously good and to show that off a bit, he’d just go acapella with his delivery to make sure you knew he could rap with the best of them. One of the peak’s of the set was “Roof Gone” from Restoration of an American Idol. The entire performance was a stunner and I couldn’t have torn myself away if I had wanted to at that point.

KONGOS were up next and I realized it had been nearly a year since I’ve seen them. They performed a fine blend of tunes from Lunatic and Egomaniac, with the latter getting the most attention. This was the third show I’ve seen since they’ve released Egomaniac and the newer songs never sounded better. Of course now that they’ve perfected everything it’s on to recording their fourth album. Still, the set was filled with hit after hit after hit and if you’ve spent any time listening to KWSS over the last ten years, you knew everyone of the tunes. If you were a fan you had them memorized and sang along, while dancing your ass off. It’s always nice to have the Brothers Kongos play a hometown show and for an hour they gave us their best possible “Festival Set” with upbeat numbers that would propel you through the rest of the day. “Autocorrect” is still playing in the back of my head as I write this in fact. 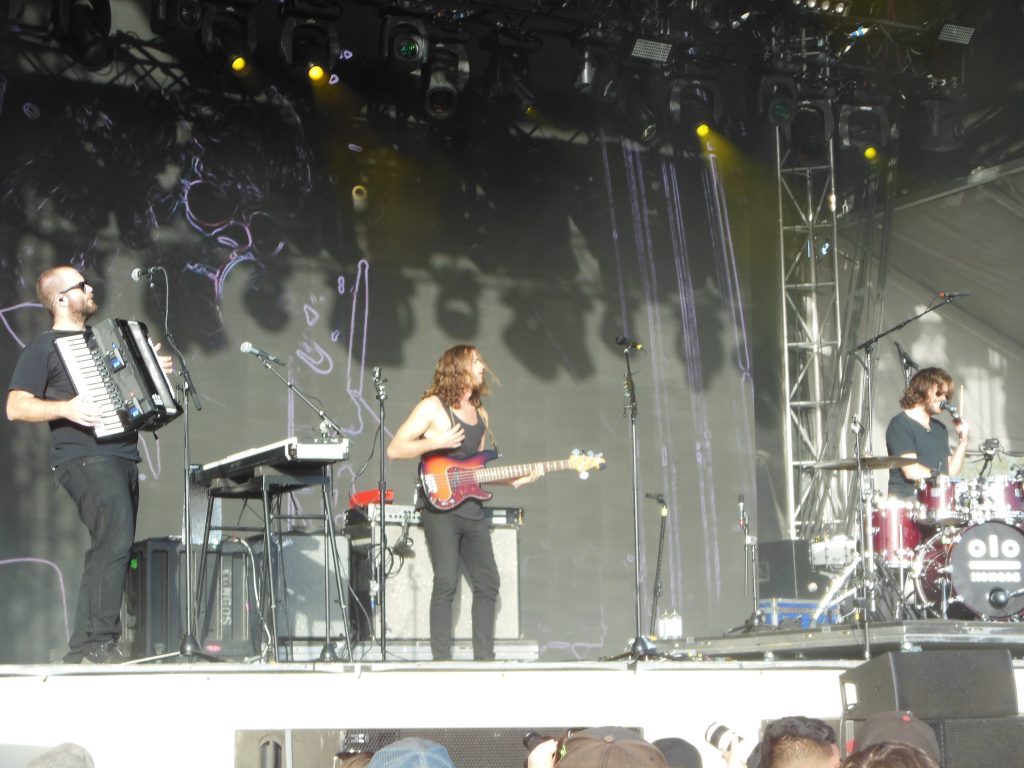 At some point I snuck away to check out the Lakes and score some Fish and Chips from Farmboy’s Fish Shack, and it totally hit the spot–not too shabby for $12. Overall, the pricing on concessions didn’t seem that bad for a festival–there’s always going to be inflation. The key here is that all of the concessions are local businesses and you’d probably have no problem paying around the same amount at their restaurant. I planned to eat twice on Saturday, so Fish and Chips was breakfast.

To answer Patrick Bateman’s question, “You like Huey Lewis and The News?” Yes, apparently, everyone like Huey Lewis and The News. The field in front of Camelback Stage was filled with thousands to prove this point. I ended up discussing this with members of The Wiley Ones. The supreme affability of Lewis, the timeless hits, and a pub hewn style of rock’n’roll that appeals to damn near everyone–if only on the level of nostalgia or kitsch. The thing is that guy can rock straight for an hour and take a crowd of thousands with him who are smiling and cheering and know every lyric, every note, and they may not even need to own his records. It was an unlikely act in the middle of this festival, but it was a non-stop crowd pleaser.

Sun was setting, day drinking casualties were appearing here and there, but mostly the dusk softened the crowd or let things get weirder. It was time for the Soul Bugs Superjam with the Dap Kings playing The Beatles with guests from other bands from the festival. The Shelters helped out on “Tomorrow Never Knows” and “Taxman,” Luna Aura peformed a smoky, sultry performance of “Come Together”, Frenship did “Good Day Sunshine” and fresh from his own set, Huey Lewis did “Money.” It was a pretty fantastic idea and the guest musicians appeared to be having  a blast. 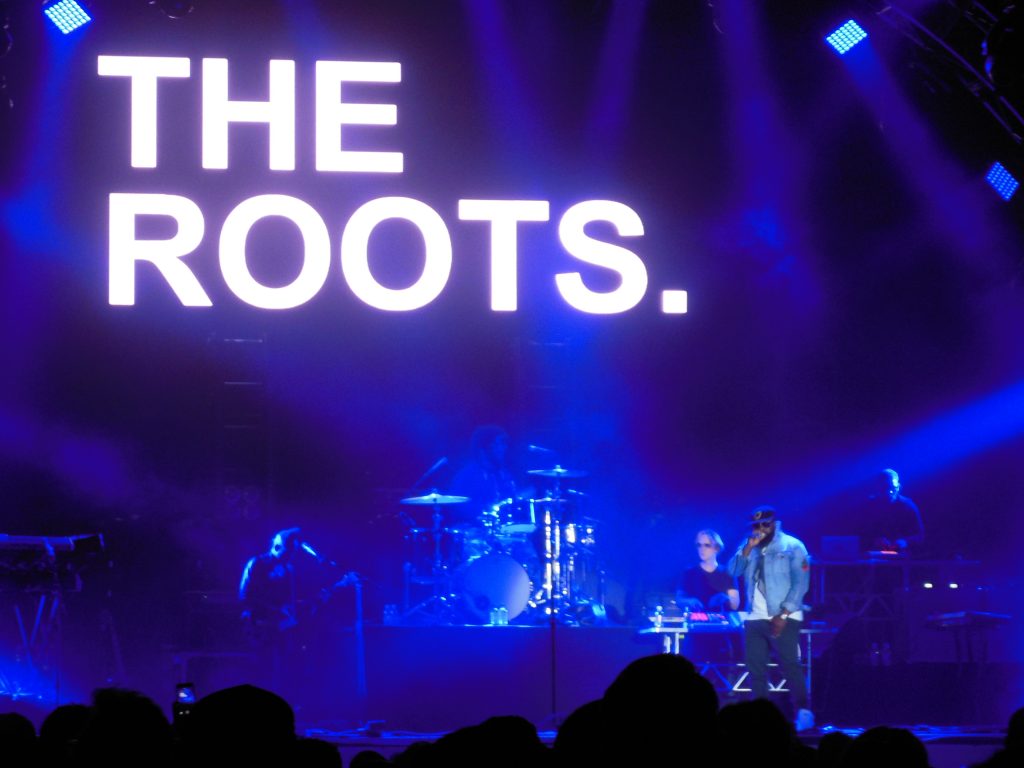 It was time to find a spot and post up for The Roots. I’ve seen The Roots three or four times, mainly at festivals and somehow, I just knew with the mood and setting of this Festival, this was going to be something special. And it was. They raged for a solid hour and I never thought to look at what time it was once. I was just lost in genre fused hip hop that explored every side of their interests, everyone was dancing, myself included and it felt like a good time to collectively lose our minds.  The festival was far from over, but I was beginning to suspect that The Roots was the musical peak of the evening for me. It was the best set I’ve ever seen them lay down and the group love I found myself in was ecstatic as we danced and cheered for more. When Black Thought said, “No one is going to top this shit!” he echoed my sentiments and in the end he was right. The Roots were my musical peak for Day Two.

I checked out Lil Jon’s DJ set for a minute, but after dancing for a solid hour I was famished and after finding limited selections available at a few vendors, I gave into my base desires and got a Cubano from Stock & Stable. It was a $12 sandwich and worth every penny. It’s a bit of an artisan take on the Cuban Sandwich, stepping slightly away from the classic ingredients, but it was delicious and I savored every bite as I watched fireballs being shot out of the lake and into the night sky, watching people collapse on the nearby hillsides, while listening to the new wave alt rock of supergroup Dreamcar. I felt “blessed” for lack of a better term. 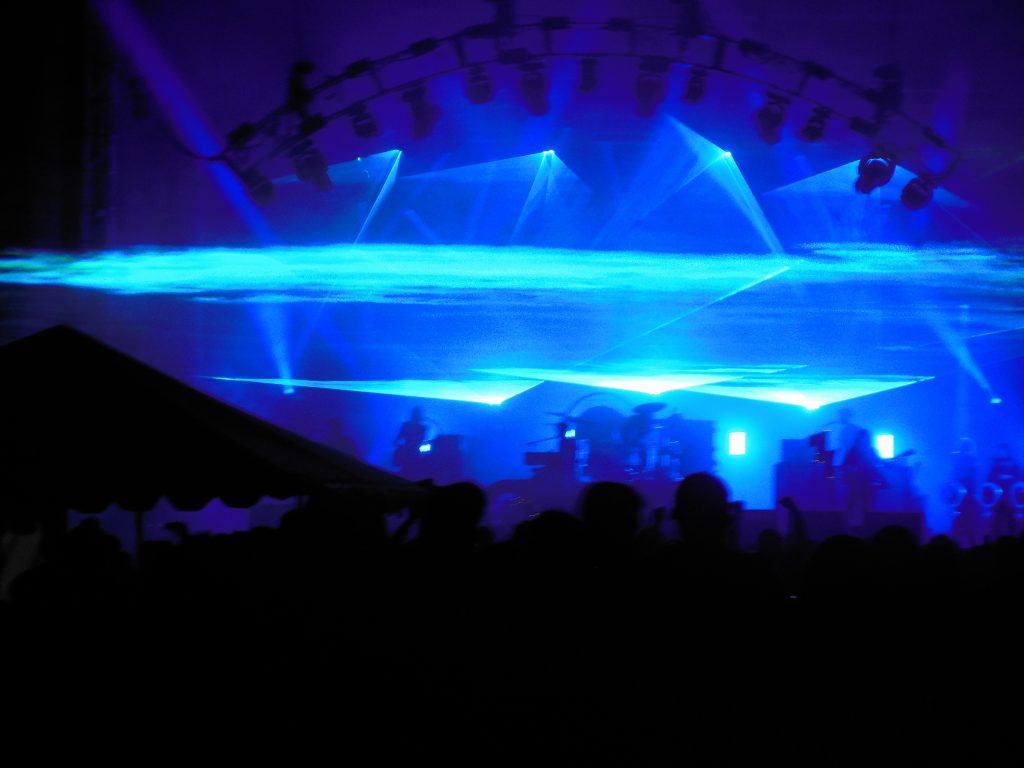 The time had come for The Killers. I have managed to catch The Killers on every tour, usually at a festival and this even includes Brandon Flowers on his solo jaunt. That said, they always put on a magnificent show, it’s always a wonderland for set design and laser lights and it never disappoints. Their set on Saturday night was no exception, but they had a new album to support and brought the best tracks from Wonderful Wonderful to join the set list of chart topping hits and fan favorites.  So tracks like “The Man” and “Run for Cover” blended seamlessly in a sea of overtly familiar tracks, proving to be one of their greatest sets I’ve ever seen. Another shoutout to those managing Lost Lake Festival, the sound was dialed in perfectly, which was not the case the last time I saw them at a festival. The Killers were flawless, but maybe it’s because I’ve seen them on so many occasions, that my heart still belonged to The Roots at the end of the evening.

The lake exploded with fireballs to the tune of “Bohemian Rhapsody” as the second night of Lost Lake Festival concluded and I was left in awe over the stunning experience of the entire day. Two out of two for being the greatest music festival to ever grace the Phoenix Metro area. Get ready for Day Three!