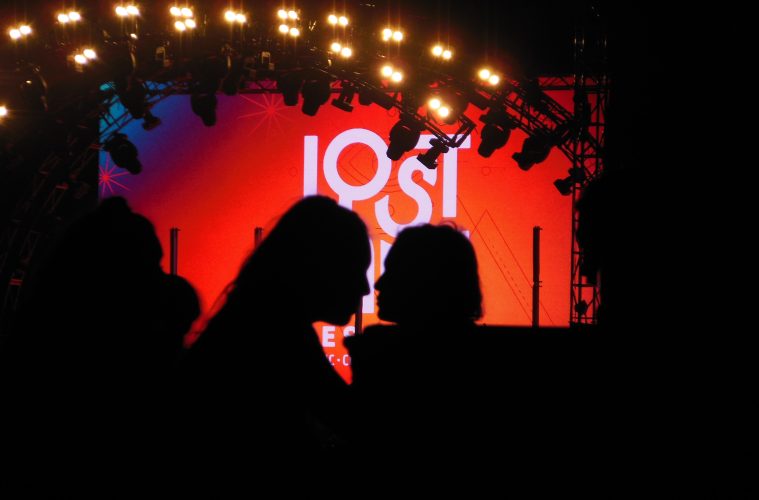 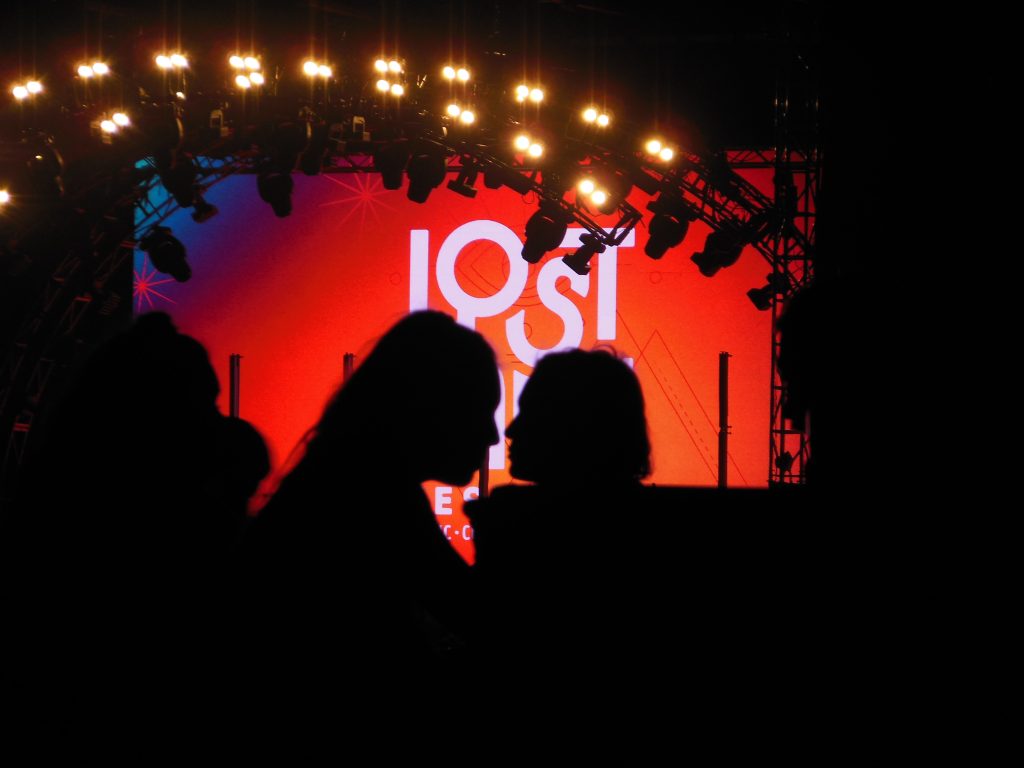 Over the years I’ve gone to a lot of music festivals and I mean thirty years of music festivals. So it’s always seemed to me that Arizona music festivals were somewhat lacking in either presentation, management or sound. The lineup is never a problem, the lineups at previous festivals have been pretty amazing and if it wasn’t a good lineup, I wouldn’t check in anyway. Well, I have to say for everything I found lacking in any previous festival, Lost Lake Festival more than made up for them, leaving every festival I’ve seen in this state in the thick desert dust. The first day of this three day festival went off perfectly and I couldn’t have imagined better weather, a better crowd or a more diverse lineup to underscore the idea that this festival was the real deal.

The first thing I had to do once I got in was find a place that was making coffee–if I was spending all weekend here, I had to stake out locations to get a great cold brew or espresso. It took me all of ten minutes to find Gypsy Cup: A Traveling Cafe. My prayers were answered and their cold brew is ridiculously good and comes in four flavors, the staff was incredibly friendly and knowledgeable as well. Once coffee was secured with pure delight, I wanted to stroll around the grounds a while while Lost Lakes played on the Echo stage and The Dap Kings played on the Piestewa stage. The layout is pretty clever and includes three stages, two adult sized playgrounds, countless local food options, hammocks and endless random acts of fun to be had. After a quick review of prices and product, it turns out Tom’s BBQ by the Lava Pit is  the best value for pulled pork and brisket. Coffee, check, food, check…it was time to let the music flow. 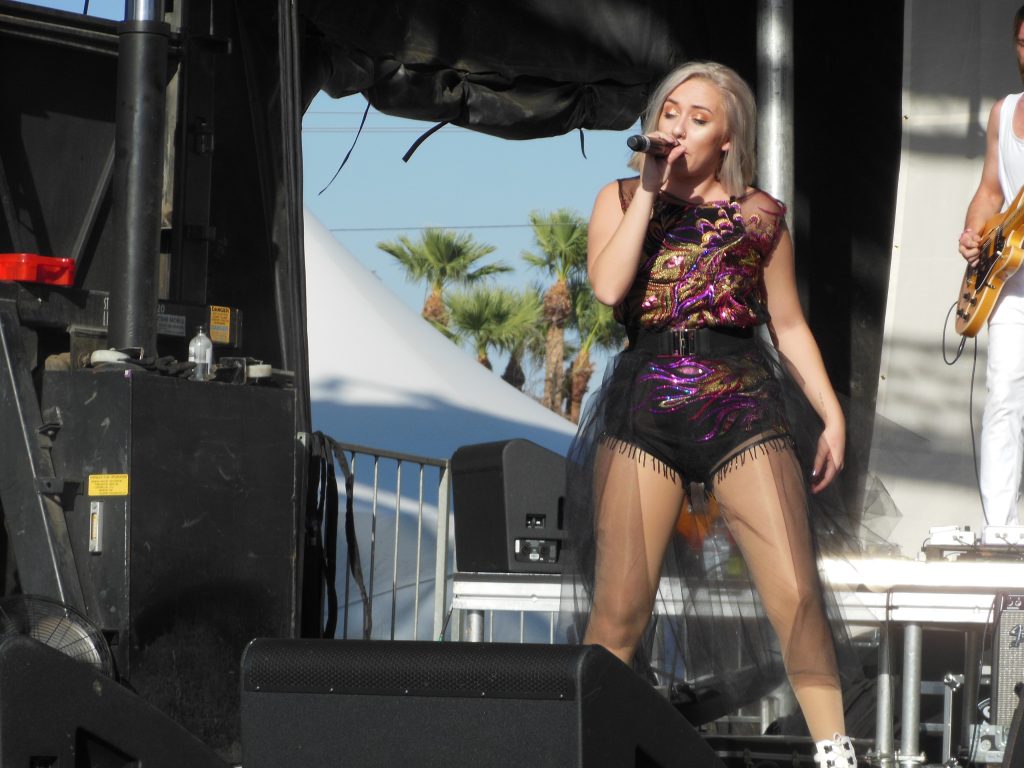 Luna Aura took the Echo stage in the bright afternoon sun and dazzled the crowd with her danceable mix of indie rock, hip hop and synth pop. Having watched her from the start, it was one of the best sets I’ve seen and one of the most exciting and interactive. I thought my pictures were turning out horribly, but as you can see, they turned out alright. She went so far as to run out into the crowd to pose in videos with fans and even brought a photographer up on stage for a serenade of “Radio.” It was a fantastic way to start the festival.

I moved from one amazing local act to another with a switch to the Piestewa Stage for Playboy Manbaby. Robbie Pfeffer was in rare form with his between song banter and it was almost as entertaining as their music. Their music, I determined, which should be heard at every Festival ever. Pfeffer even commented that the stage was bigger than most entire venues they’ve played, but they owned it and the crowd loved it. It was a high energy start to the day and Pfeffer’s wry commentary kept everyone smiling and participating in songs like “You Can Be a Fascist Too.” He finished the set by jumping into the audiences and joining them for the finale. 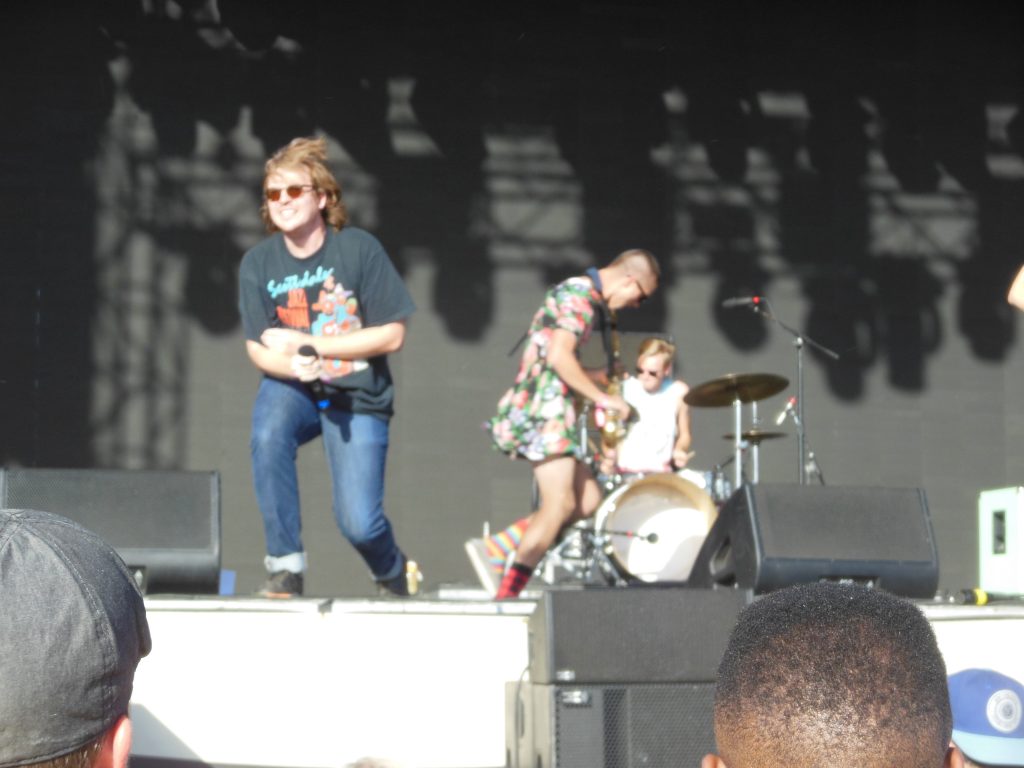 After the one two punch of Luna Aura and Playboy Manbaby, I thought the Festival needed more Fairy Bones, which I then turned around to find three fourths of that band hanging out. We wandered the grounds for a while in awe of the authentic festival in front of our eyes. I caught bits of Trinidad Cardona, Noname, Johnnyswim while checking out the games, the vending options and the water refill station. Note, the water from the refill station doesn’t taste like trash–it tastes like water, which is amazing here, fresh tasting purified water. Brilliant.

I was near the Camelback stage when Broods started and I was drawn into their set for two reasons, one was that they were really great–reminding me of a New Zealand Metric, but also because lead vocalist Josiena Nott kept dropping hints that the band was going through some changes. It was their last show of the year, but she seemed to make it sound like it was their last show forever. Time will tell on that, but the set was amazing and I couldn’t tear myself away from it. I got chill out on a hillside and watch semi-locals Calexico run through their southwest psychedelic rock set, loving the fact that Calexico sounds exactly like what you’d expect a band called Calexico to sound like. I’ve thought this every time I’ve seen them live or spin their records. It was perfect as the fall into night became complete.

HAIM commanded the Camelback stage with their brand of brilliant pop rock and the crowd took to them in droves. It was the first act where I noticed people running to see a set excitedly. The set was interrupted for me by the sole act of horrible behavior I witnessed the entire day, when a father threw his daughter to the ground by the neck. A group of us saw it, one ran to get a cop and it turned into a disheartening look at the life of a family inside the cycle of abuse, as the mother once retrieved, complained that her twelve year old daughter was mouthing off, she was an actress and people should mind their business. After the guy threw her down we all shouted something at him and he responded, “It’s okay, I’m her father” to which we responded collectively, “That is NOT okay.” The police dealt with it and in the end nothing was really done, and we were the “villains” because we made a big deal out of it. I went and stared at fireballs being launched from the lake and then returned to HAIM so they could soothe my nerves after that violent impression.

The Pixies were up next. I’ve been seeing the Pixies live for nearly thirty years and I rarely pass on a chance to catch them. Their set was heavy with early material from their first three records, with some b-sides and a few from their latest album Head Carrier. I haven’t seen them since they released that, so I got to check out their new material live and I have to say, it fits in well with all their classics. I’ll never get used to “Where Is My Mind” now being regarded as their big hit. They played for a solid hour and never let up on the intensity once. The entire set slayed from beginning to end and I was overjoyed with the tracks from Surfer Rosa, and the only album left completely untouched was Bossanova. I’m not sure I’ll ever stop loving seeing Pixies live. 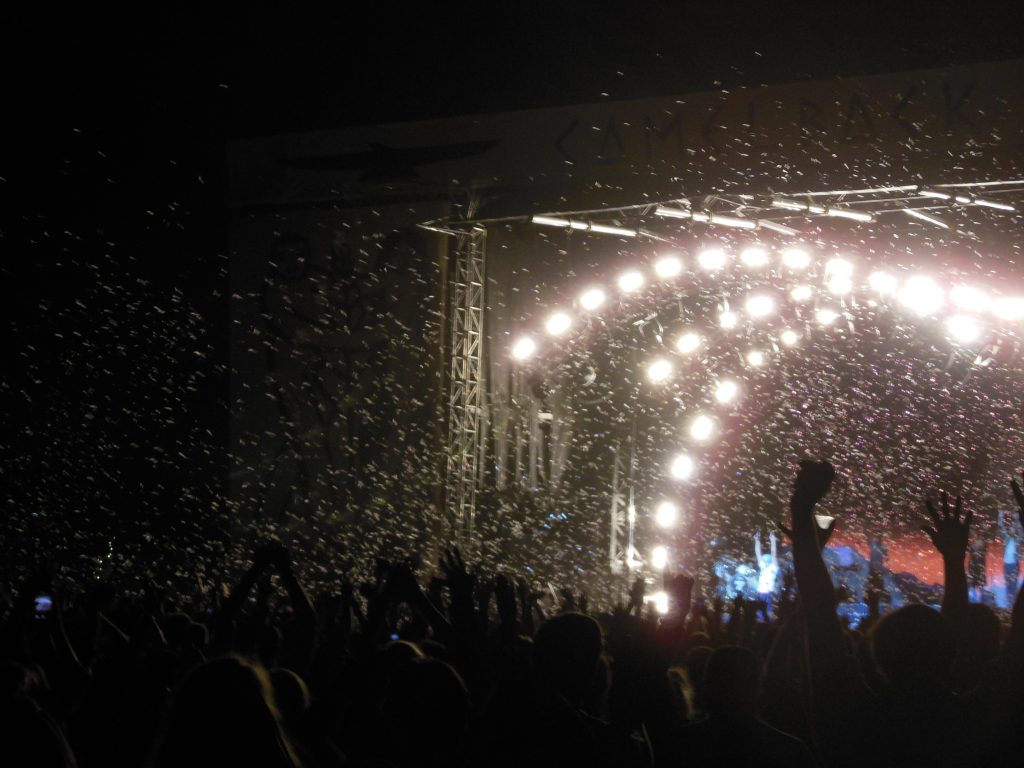 It was time for the grand finale and it was grand indeed. The entire reason my heart was set on catching at least Friday at Lost Lake was Chance The Rapper. Coloring Book was in my top five albums from last year and I was beyond excited to catch his act live. I could not have prepared for that show in anyway and I was utterly blown away by every second of it. I was prompted to take notes on his bits of wisdom as the show took on the tone of a modern day salvation show with Gospel harmonies and horns and some of the most impressive stage setting of the weekend. Chance said repeatedly, “I’m only here because of grace and mercy” and at that moment it felt universal, like it applied to everyone their witnessing this amazing show. I was in awe of his set, his music and his beautiful humanity. It was the perfect finale to a perfect day, highlighted by fireballs exploding from the lake on the way out to the tune of Grieg’s “In The Hall of the Mountain King.”