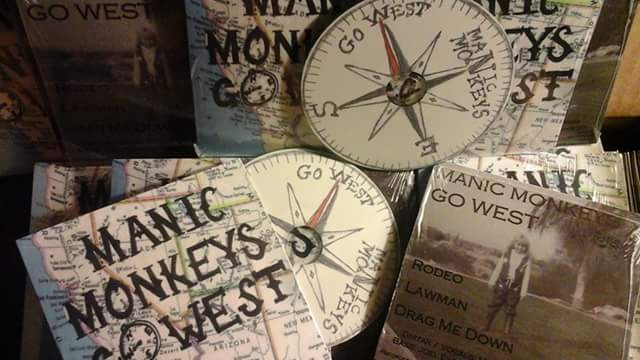 Just a year after their debut release, Manic Monkeys have dropped their second EP, Go West, and it shows how far a band can come in that time. While it almost seems like an extended single, with three songs that clock in under less than 10 minutes, it’s a solid effort. First off, it appears that lead singer Tiffany Hilstrom’s voice has truly developed into something great after a year of performances and a second swipe at getting it down on record. Mike Hilstrom’s guitar is better than ever, and with the rhythm section of Joel Ekdahl on bass and Derek Fernandes on drums, they sound almost like a completely different band from their initial release.

Also, the songwriting is simply stronger here. They are definitely still pushing American rock to the hilt, but they’ve matured a lot. “Rodeo” kicks off with some slow-burning blues, and is a song that is perfect for driving late at night in the desert.

Tiffany’s vocals come off as a bit of a sultry surprise, and Mike shows his chops on guitar—it’s pretty stunning.

Meanwhile “Lawman” comes across as almost ’60s-tinged garage rock, which is another surprise. Tiffany and Mike sing together on this one, and it’s a great mix. This could have come straight out of 1966, both musically and lyrically. If there’s a single, this should probably be the one, for the groovy vibe alone.

We return to bluesy rock for the finale of “Drag Me Down,” which is another stunner from Tiffany on vocals and Mike with some of the most impressive guitar he’s committed to record. I only wish there were more songs here. Three songs just get you into the groove and you want more when all is said and done. Let’s hope for a longer EP or a full-length album to follow this one.