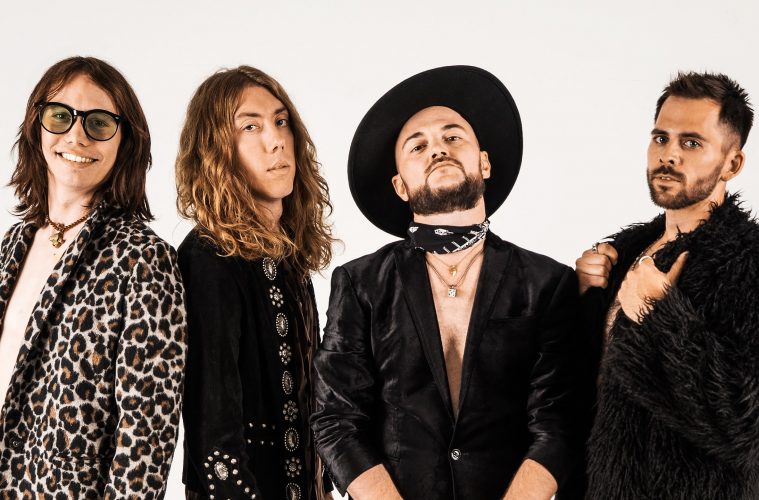 Wyves Climb to the Top 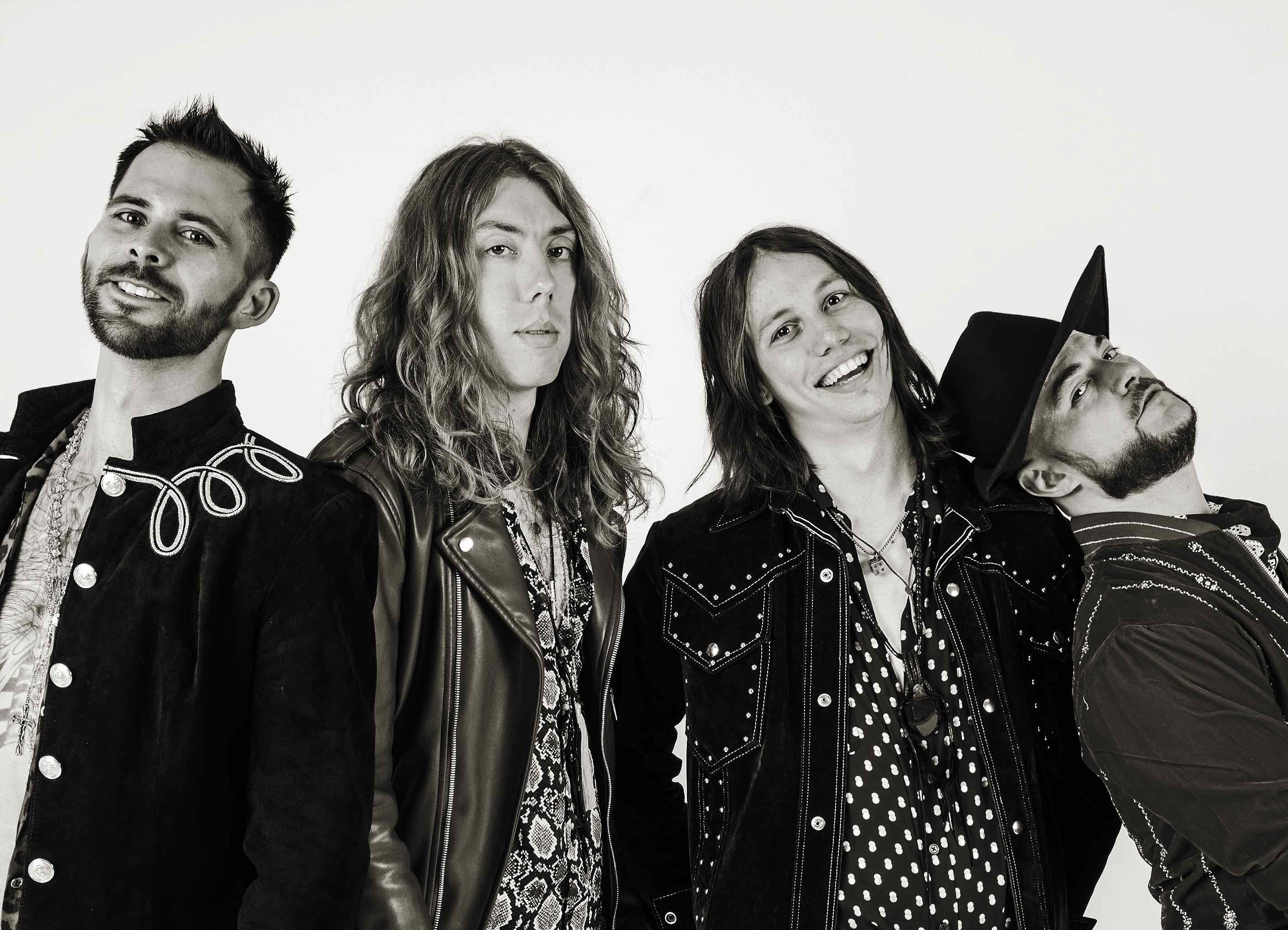 The word “rare” is defined in a couple of ways. Sometimes you’re talking about how you like your meat cooked, and other times you’re talking about a thing that doesn’t happen very often. Let’s use “rare” to describe the Phoenix band Wyves, as in “This is the type of band that doesn’t come around very often” and also, “Like a beautifully cooked steak, damn if they aren’t tasty.”

Wyves jumped on the scene in 2015 and have only gained momentum since. The quartet is made up of local music-scene veterans, which shows in both the polished performances they deliver on local and national stages and in their recorded output. Lead singer/guitarist Corey Gloden, 37, is joined by guitarist and vocalist Nick Sterling, 28, bassist Brenden McBride, also 28, and drummer Evan Knisely, 33, and the kinetic energy between them is palpable. Good-looking, talented and eager to please, it’s no wonder Wyves have gotten as popular as they have in their relatively short career.

The band’s sound is modern but steeped in vintage rock ’n’ roll, because these guys can really play, and vocalist Gloden has got the goods. Their new album, R U OK? is completely solid from the first track through to the last. To celebrate their recent release, we had a chat with the band about R U OK? and how they come up with their songs.

How did Wyves get started?

Corey: Wyves was all four of us being in the right place at the right time. We had all been coming off stints in other successful local Arizona bands, and the pieces just sort of fell together in no time once we all started jamming and writing. It was nice that we were all seasoned players in the scene – but it was even better that we had a clear vision of the music we wanted to make and had the right skills and capabilities to do so. The knowledge from our past projects and what we could have done better in previous endeavors was communicated and put into immediate action with Wyves. We hit the ground running with a full-length album shortly after starting playing shows around town.

You guys have a pretty storied history in the Phoenix scene. What bands were you in?

Evan: Corey was (and still is) in Dry River Yacht Club. Brenden and I were founding members of Sara Robinson & The Midnight Special. Nick Sterling was a young prodigy on guitar and released albums under his own name. He wrote an album with Sebastian Bach and toured overseas with him opening for Guns N’ Roses.

Where was your first show?

When did you realize you guys had something special?

Evan: We sold out the Crescent Ballroom eight months later for our first album release, Spoils of War. 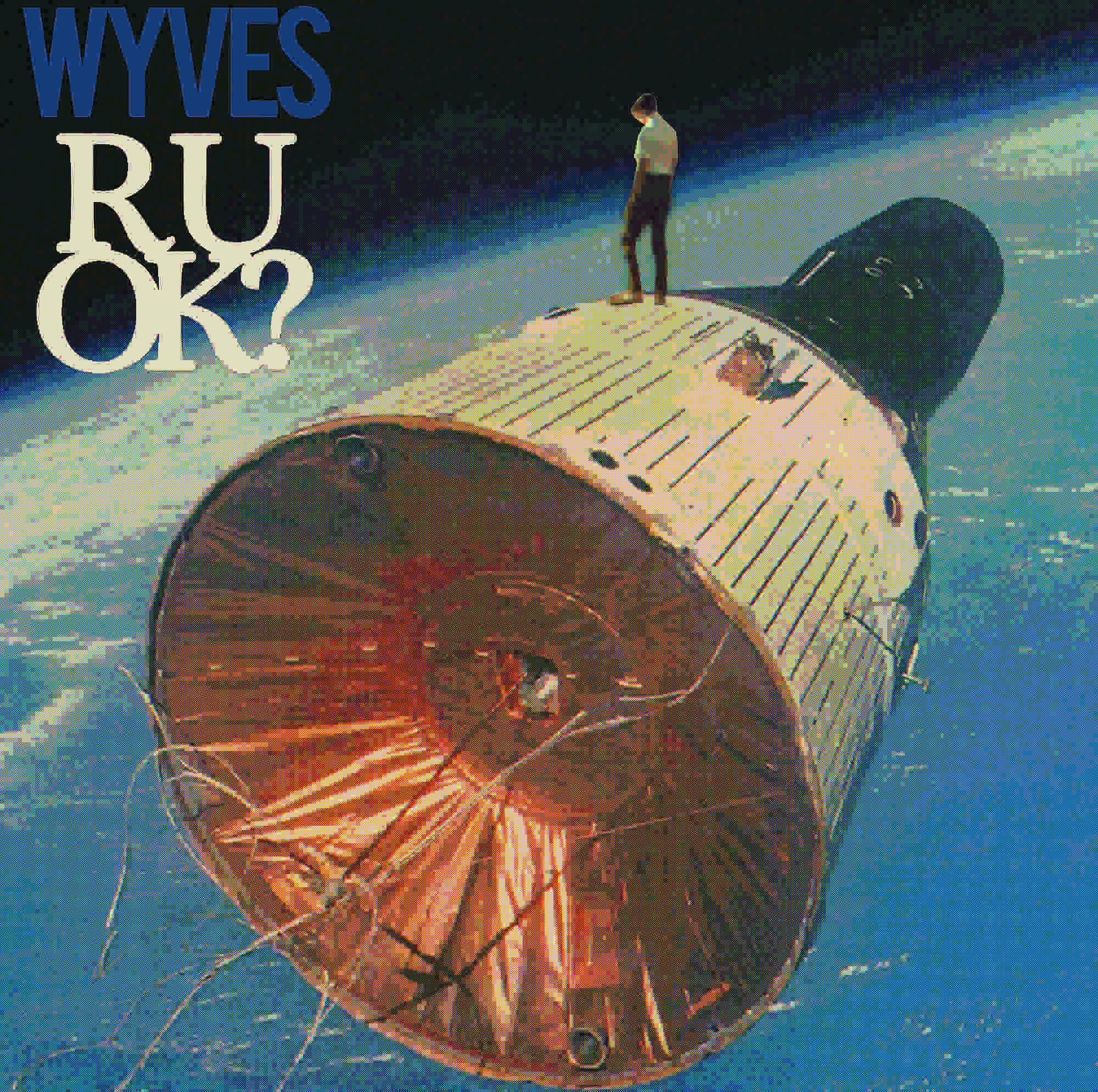 That’s awesome. How did you come up with the title for the new record?

Corey: The question “Are you okay?” is something I have found interesting since I was young. Sometimes there is a genuine concern, but often it seems condescending or a trigger to shine a negative light and ultimately create something that is not there. I believe that if the answer to the question is no, that is just as valid because it’s honest and everybody is dealing with something. The alternate title could be “Don’t dim my shine, motherfucker!”, which comes from the song of the same name (the epic second song on the record).

We all ultimately felt this title represents this collection of songs and the state of the times we live in, from current events to our private lives. The spelling is a poke at the texting era, and we also felt that’s how Prince would spell it.

Tell me a bit more about the title track.

Corey: Here is a quote from a classic George Carlin bit that caused me to finally write about my hang-up in a song: “No, not me. I’m not nice. I’m not fine. I’m not great. People ask how I am. I answer, ‘Fairly decent.’ No superlatives. Sometimes I answer, ‘I’m not unwell, thank you.’ That pisses them off ’cause they have to figure that one out for themselves.”

What formats will the music be available in for consumption?

Corey: R U OK? is available on limited-edition, 180-gram blue vinyl, pressed at Third Man Pressing in Detroit, Michigan [which is owned by the inimitable Jack White of White Stripes fame]. It will also be available on all live streaming providers (Spotify, Pandora, SoundCloud, etc.) and is available for digital download, with online distribution through Tunecore.

Fans should probably also check out your online store at ilovemywyves.com.

“Princess Excess” starts off with a cool guitar riff, a very “this is our new album” guitar riff. Is this song about someone in particular or more of an idea about a lifestyle?

Corey: Lyrically speaking, “Princess Excess” sounds like a party-girl rock song but is actually written about Lady Liberty and as an homage to the working class – the quickening of industry and technology and the unrealistic inflation/cost of living, et cetera. 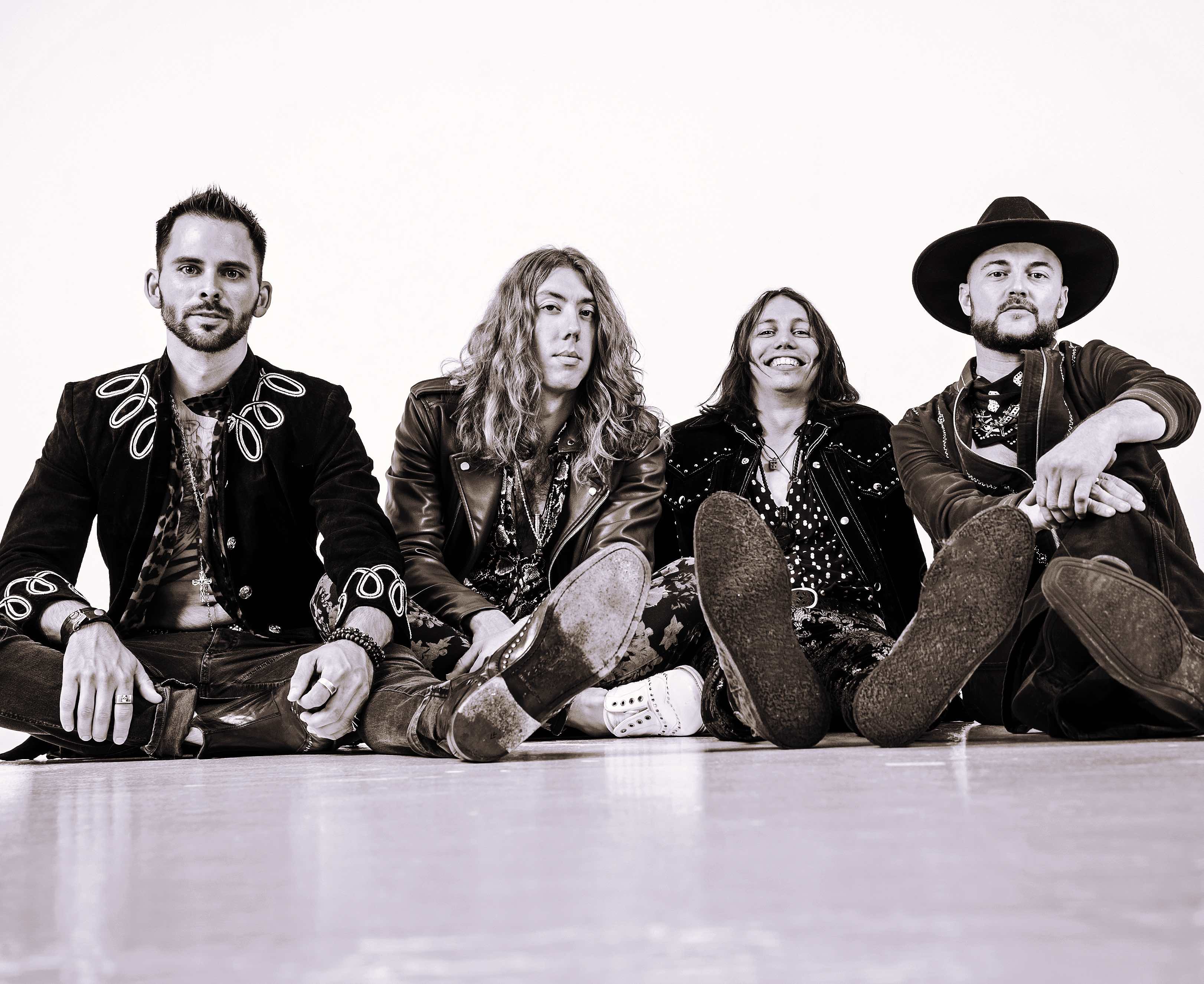 Nice! This makes me curious. Who is the primary lyricist in the band?

Corey: I am the lyricist. To keep as much relevance and urgency in the vocals, I continued to write and rewrite the lyrics for every song up until walking into the booth to lay them down. Big thanks to Bob Hoag [of Flying Blanket Recording Studio and one fashionable and slinky drummer] and the Wyves guys for allowing me this freedom. I like to bounce my ideas off of the guys up until the last moment, especially on material that has more political or touchy subject matter. Their feedback, support and comfort with the material in the lyrics are key to getting the best results.

How do you guys typically write, and does everyone bring songs to the table?

Evan: Corey and Nick will bring riffs and melodies into the practice room, where we all mold and craft the structures, polish and finish them off. We often test them out live and will go back and change what we think wasn’t working.

Corey: Brenden and Nick work tirelessly on their tones, parts and overall sound in pre-tracking leading up to the recording sessions. Evan went harder at his drum parts and supporting each song more perfectly than any drummer I have recorded with. Bob Hoag finished it off with his golden touch and advice, as usual. I heard a lot of different parts that could be played by horns, keys, string sections, et cetera, but we decided to do this ourselves. What we could not get with our guitars or synthesizers, we got with background vocals. Nick was in the booth for two days while we constructed this, with Bob adding his input and vintage effects. Along with everyone’s contribution and collaboration, the result is something we will be proud of for years to come.

What about “Mar-A-Lago”? Is this your attempt to win friends in the Republican party?

Corey: In the words of Bruce Campbell, “It’s a trap, get an axe.”

With its snowball effect, “Distractions” reminds me a bit of the old Trunk Federation song “Bad Dog-Reject.” How much influence do other local bands have on your sound?

Evan: We find endless inspiration from all the local bands in town right now to keep writing, pinpointing our sound and perfecting the live performance. We try not to pull too much from any of our favorites.

Corey: “Distractions” calls out the Orwellian nightmare that has gone on long enough: a manic song for manic times. 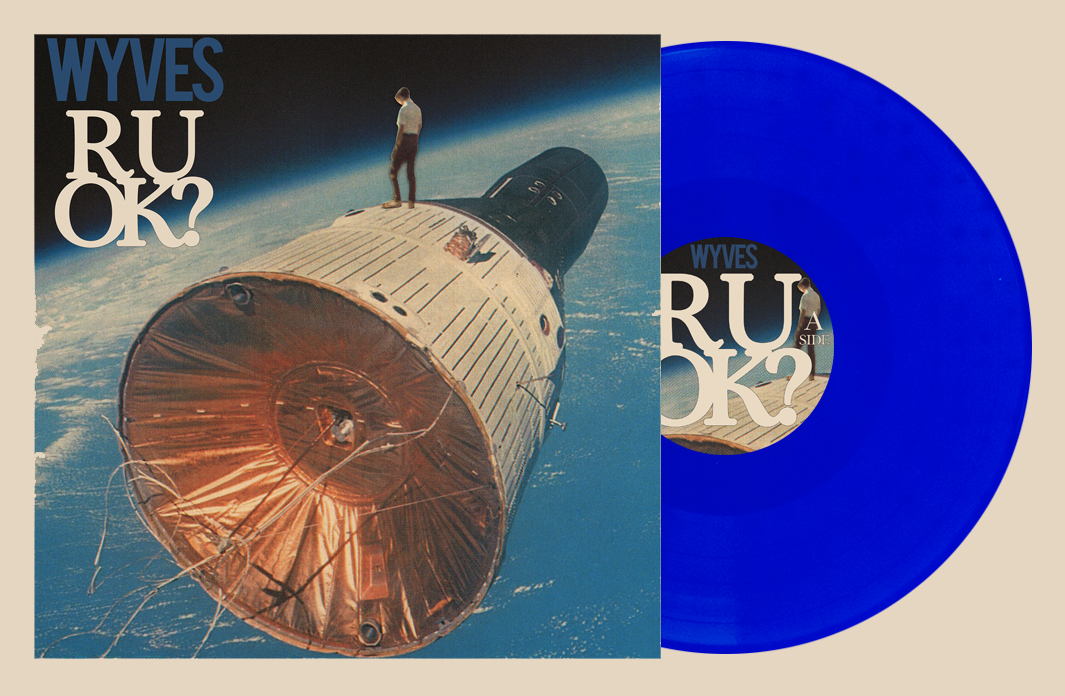 “The Speed of Sound” has another great (and big) guitar riff as an intro. I’d guess this one is fun to play.

Corey: “The Speed of Sound” is in first person narrative as Chuck Yeager, the day he reached Mach 1 and broke the sound barrier.

Nick: We’ve got a Sly Stone vocal line between Corey and I. It feels carefree in contrast to the heaviness of my guitar riff. I love playing this song live. I get to play the tambourine, which always gets the party started.

I really dig “My Gravity,” and I’m always a sucker for a great song with a killer bass hook. Who wrote this one, and what is the story behind it?

Brenden: Nick and I spent a lot of time making sure this song’s bass line is not just resting on the root notes, but instead moves around a lot. To achieve the tone, I used a P [Fender Precision] Bass, boost around 2k for pick click, sponge over the bridge, [and plugged] straight into the board, like Carol Kaye [the legendary session player with Elvis Presley, Sonny and Cher, The Monkees and more].

Corey: “My Gravity” uses Einstein’s definition of gravity in the chorus background to explain love/self-doubt/purpose. This song is a great example of how we all wrote together on the album. I brought in the basic chord progression and melody. Brenden and Nick wrote that bass line, Evan and I dissected the hell out of the drum part, and he created something dynamic, musical and full of drive. Nick created those swirling “oooh’s” in the bridge.

The night before I went in to sing it, a whole new melody, topic and title came to me when I was falling asleep. It was like the George Carlin bit: “The meaning of life? Don’t be crushed into the ground and don’t float away into space.” I went in and recorded it to the existing tracks without anyone hearing it and them trusting me.

“Shake Off the Day” has a really positive vibe at the outset and some pretty powerful lyrics. What was the inspiration for this one?

Corey: I had been sitting on this 75% written for years. It was taken from my early years playing in the scene as an out-of-towner, getting wrapped up in some random madness. The guys really liked it and were eager to finish it, adding some incredible elements to the arrangement. Bob encouraged me to write lyrics over a guitar break, which is now the chorus.

Why did you choose “Leroy” as the album ender?

Nick: We didn’t want to end the record going out blazing. We felt it was a nice bookend.

Corey: “Leroy” is a tribute to my grandpa, who I share the same middle name with and who passed away a few days before we released our first album. This is a band favorite. It was the first song we wrote for the record, and we all agreed we couldn’t end it any better.