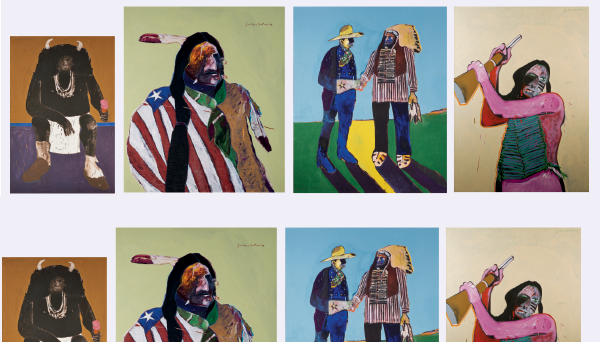 Fritz Scholder has a rich history. He began making art as a teenager in the 1950s, studying with high school teachers. While still in high school, he pursued additional educational opportunities, including an arts camp at the University of Kansas. Shortly after graduation, he moved with his family to Sacramento and began studying with proto-pop artist Wayne Thiebaud. His connection with Thiebaud evolved into the two men partnering in a cooperative gallery, along with a couple of other artists, and Scholder began to receive critical acclaim. From there his career continued on a very mobile trajectory, well into the future.

Super Indian: Fritz Scholder, 1967–1980 is on view at Phoenix Art Museum through June 6. The years of this exhibition’s focus are ones that were pivotal in Scholder’s career, gaining him substantial attention not only for his interesting style but also, more dominantly, for his subject matter. Through more than 40 paintings and works on paper, viewers get to see the work Scholder created when he began to examine and tackle prevalent societal stereotypes about Native Americans, including pieces from his controversial American Indian series.

Using a style that blended abstract expressionism and pop art, with big brushstrokes and captivating colors, Scholder was the first artist to paint Native Americans draped in the American flag, or with beer cans and cats, which stirred up controversy. Scholder picked a good time period to delve into the subject matter. In the late ’60s, television culture was starting to grow into the many-armed monster that it is today, and shows like Bonanza and The Big Valley were offering their own takes on history and Native life and culture. Unfortunately—and this remains true right up to the present—TV is a medium that sets and gives wings to perceptions, however inaccurate. Scholder’s timing was crucial, and his work played an important role in inspiring artists to challenge the media’s misrepresentations (or, often, exclusion) of ethnic groups.

“Matinee Cowboy and Indian” is a large-scale painting that shows the two named figures, each in traditional attire (one in a cowboy hat, the other an Indian headdress), engaged in a handshake. Even before you focus on the men themselves, the subtleties of the work highlight its true indictment. The men’s bodies cast a shadow that implies a setting sun, perhaps the united completion of an arduous day; the handshake solidifies the relationship. The scene easily recreates the sense of manufactured romanticism that movies employ in order to wrap up with a sentimental, cinematic happy ending, despite what reality they overlook in doing so.

One of Scholder’s legendary works, “Indian with Beer Can,” is loaded with an intensity that shakes you to the core. The figure that sits at the table is wearing dark sunglasses, along with a white shirt and a tall, black cowboy hat. A single can of Coors beer stands before him. A rich purple highlights the background. The way the man’s rough teeth edge through the opening of his mouth, combined with the blackness of the sunglasses, creates an endless black-hole effect. It feels as if you are being pulled into a swirling limbo. It’s haunting, and this work highlights the artist’s level of investment and sincerity. The exhibition concludes with Scholder’s Indian Land paintings from 1980.

Though Scholder created artwork that was instrumental in smashing stereotypes, changing the way Indians were portrayed in art, and further served as continuous inspiration to both Native American and non–Native American artists, not everyone was excited about Scholder being the messenger. That aspect was a bone of contention for some who seemed to feel that maybe the artist wasn’t “Indian enough” to be the one to draw attention to issues faced by American Indians and perceptions that existed about them.

The artist, who was one-quarter Luiseño (a California Mission tribe), never seemed to have a desire to self-designate his position as one of resounding authority. In fact, Scholder often stated that he wasn’t Indian but had a unique perspective from which he worked, offering his own point of view. In addition to bringing to the fore issues faced then, and still today, by Native American persons, Scholder’s work also serves to continue a conversation about the importance of information and how we assign, direct and even interpret relevance.

Scholder had a lot of ties to Arizona: he maintained a residence and studio near the historic Cattle Track artists compound in Scottsdale, exhibited around the state multiple times and received an honorary degree from the University of Arizona. Super Indian offers an opportunity to see work from a crucial stage in the artist’s timeline.