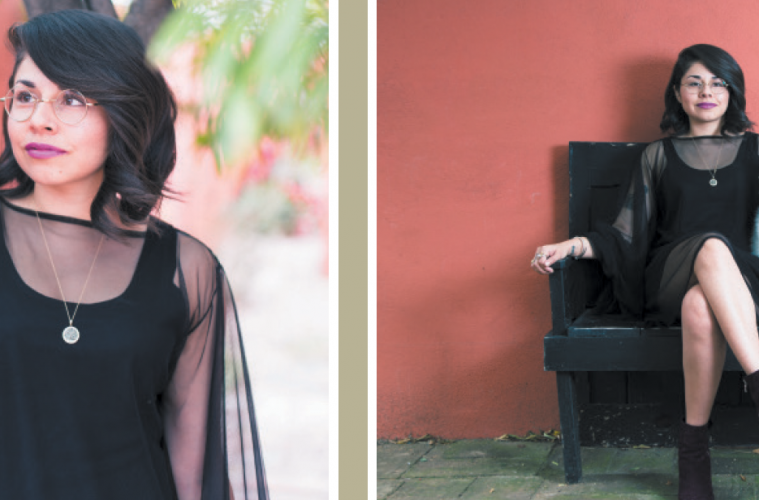 Jenna DuncanMarch 12, 2016
Fashion0 Comments
1
0
0
1
0
1
0
For Leonor Aispuro, making clothes and sewing is in her blood. She can remember learning to sew around age five, and working with her cousins and other female family members on creative projects. Aispuro took particular inspiration from her aunt, who was disabled. “When I lived in Mexico, my aunt would babysit me. She was deaf and mute at the time, and now she is, unfortunately, blind as well.”

Aispuro mostly grew up in Arizona, but when she goes back to visit her aunt, she is astounded to find her still crafting things with her hands. “At the time, there were no special schools for her, and so she never learned sign language. I think her way of expressing herself has been through creating. And that’s how she and I would communicate,” Aispuro says. “In many ways she was like a little girl, like my only playmate.”

“Then, as a teenager, I used to always make things for my friends,” she says. As she and her friends got interested in fashion in high school, they would sew skirts and matching handbags. She’s always loved making things with her own two hands.

She started the fashion program at Phoenix College in 2003, straight out of high school at age 17 (she is now 30). At the time, Phoenix College had one of the only college-level fashion programs in the Valley. Arizona State University didn’t have a program, and the Art Institute of Phoenix only offered fashion merchandising. Aispuro wanted to start at a place where she could learn more about construction along with the business.

“So I went to school there, and my cousin and I had started our own clothing line called Arte Puro,” she says. “We took parts of our last names and combined them. It actually translates into ‘Pure Art,’” she explains. The line came out of their enjoyment of creating accessories. At first, Aispuro and her cousin, Emily Uriarte, worked mainly with vintage fabrics.

“It was a huge learning experience, doing it all ourselves,” she says. “We got to learn a lot about the business side of things.” That was only the first step, professionally, though. Aispuro sought other, bigger opportunities in the industry.

In 2009, she moved to New York City. A couple of years later her cousin followed, and they continued building their clothing business. They sold items in a boutique in Williamsburg called Treehouse, on Grand Avenue in Brooklyn. She says they also sold at a co-op space in Brooklyn while simultaneously selling at Nostra Style House in Phoenix (formerly owned by Angelica Gonzalez).

While running their start-up business, Aispuro also worked fashion internships and ran around between various other jobs. First, she interned at Betsey Johnson and then at Marquesa, she says. She also worked at a children’s clothing company and handled corporate clients, such as Wal-Mart, and other department stores. She tried to absorb every aspect of the industry she could through her work experience—from design and planning to finally selling.

She’d moved to New York on a whim but decided to stay and keep it going for a while. While living in Greenpoint, she noticed the neighborhood undergoing a sudden, massive influx of young creatives. “It got over-saturated and kind of crazy. I didn’t know which direction I was going.”

After a few years of pouring in all of their heart, time and money, Aispuro’s cousin decided she wanted to leave the business. “We kind of broke up—not as cousins, but as business partners.” Aispuro moved back to Arizona and her cousin followed shortly after, but for her own reasons.

“I feel like I always need to be creating or working on something,” Aispuro says. “Otherwise, I would go crazy.” Shortly after she got back to Phoenix, she felt the timing was right to start her own business.

In New York, Aispuro went to FIT and completed a certificate in sustainable design. Taking what she learned and what bothered her about the “gigantic fashion industry,” she formulated a new line: Leonor Aispuro Private Collection. At first people who knew her from Arte Puro were confused or reluctant to embrace the idea that she was designing solo. But she wanted to make it clear that this was her independent line, so she gave it her own name.

A lot of the other students from her program were working in corporate fashion, for companies like Ralph Lauren and Tiffany’s. They were looking for ways to change the corporate structure, or were completely turned off and were seeking other alternatives. “In Europe they are more aware of sustainability and small-scale production. I feel like in the U.S. it’s taking a little longer,” Aispuro says. She predicts that sustainable fashion will spread worldwide, but it may be a slow movement.

“One thing I learned is that it’s impossible to be 100 percent sustainable,” she says. This is especially true in Phoenix, where places to buy supplies are limited. But Aispuro tries to buy from other local businesses whenever she can, and she has become very interested in working with natural dyes and earth-friendly processes. She also plans to do whatever she can not to outsource any of her work.

“I got so turned off by mass production and what most people think fashion is. After seeing how things were done, I got kind of depressed. I get that it’s a business,” she says. “But for me, at the end of the day, it’s more than that. I guess I tend to think more long term.”

Aispuro says it’s been healthy and reinvigorating to have the time to go at her own pace and make her own path. “It’s hard to explain at times. People just don’t understand unless they are going through it themselves,” she says. Though there may have been some small hurdles, she’s building the new business from the ground up and seems to be gaining momentum and positive feedback.

Aispuro did a live sewing event alongside Lawless Denim and GROWop for “Fashioned in America” at Phoenix Art Museum in 2014. “I like the idea of creating something that is for no specific body type, no specific age group—just something you could throw in a suitcase and then take it out and style it any way you want,” she says.

In her design process, she does a lot of draping. She also tries to utilize as much of the fabric as she has. She recently designed a black silk kimono-like wedding dress for a client. It was a unique order, she says, and she doesn’t always do formalwear. Aispuro’s last collection was based around a lot of lace appliqués, some sewn on top of others. But for next collection she is working on designs based around embroidery. She likes to embrace handiwork and create pieces with more of an artisan feel.

With Arte Puro, she and her cousin travelled to Oaxaca and studied hand-embroidery, natural dying and other more organic processes. In the garment district in New York she picked out smaller businesses and got familiar with the workers. “I tried to find little shops like G & R Fabric Inc. on 39th Street in New York. When I worked at Marquesa, they would send me to this place called Spandex World,” she says. “That is where I source a lot of the fabrics I am currently working with.”

According to a recent article in the Atlantic titled “Is This the End for Fashion Week?” many fashion houses are abandoning the concept of planning the release of designs around seasons. Many are also turning away from the authoritative dictates such as the season color and choosing to go with smaller-scale, limited runs and exclusives.

“At first living in New York during Fashion Week was fun and exciting, but after a couple years, it was like, ‘Get me out of here!’” Aispuro says. “I guess I consider myself a bit of a rebel. When I see what is going on, I’m like: ‘What can I do different?’ I always try to do my own thing.”
“I have a lot of repeat customers,” she says. She talks about working on a specific wedding dress and how the same customer then wanted something for her anniversary. “When I think about it, word of mouth is what has kept me relevant,” she says.

Aispuro doesn’t like to put out duplicates of garments cut from the same design or of the same color. She likes to change the cut or embroidery each time, so that each piece is truly bespoke. Finally, she says that true fulfillment for her comes from hearing that she has inspired other people. Circling back to the aunt who originally inspired her, she says she loves working with her young niece Sofia Taglienti, who is 16 and a student at Metro Arts. Taglienti sometimes works as Aispuro’s assistant while learning the ropes of the artisan fashion trade.

Lately Aispuro has been getting recognized for her hard work. Last year she was a finalist for a Phoenix New Times’ Big Brain award for local creatives. Her work was also included in Italian Vogue online, and she was recently profiled in Vogue UK.

Aispuro says that her plan for Phoenix includes a fashion presentation (not the same as a show) at the Fourtoul Brothers’ space later this year.