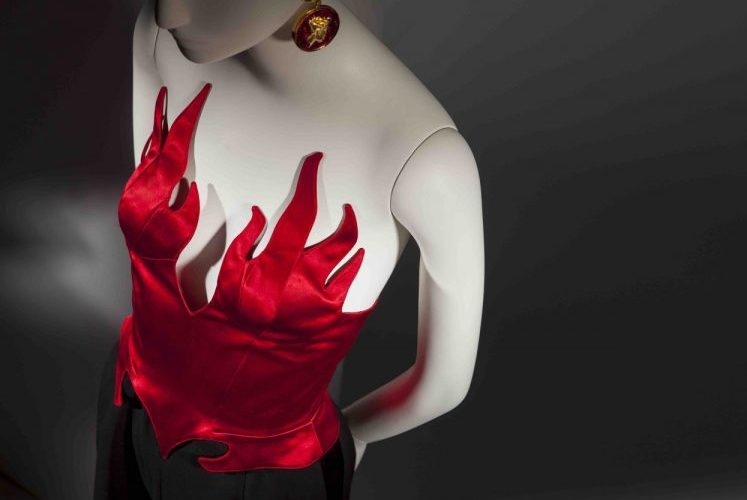 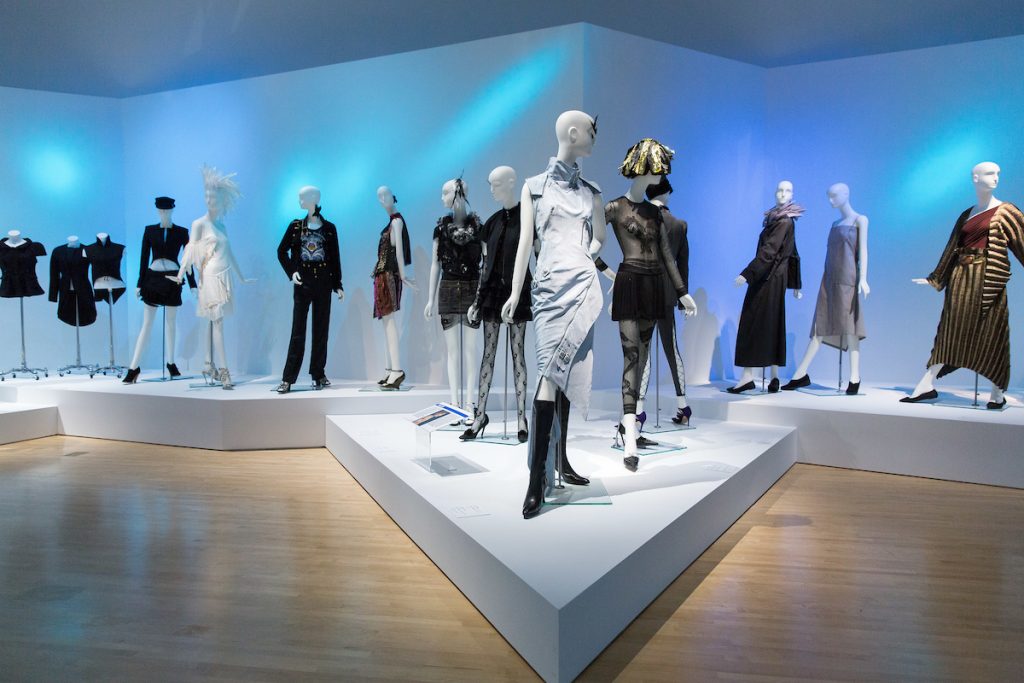 From 1963 to 2013, the fashion-loving couple James and Karin Legato operated their high-end, fashion-forward boutique Emphatics at One Oxford Centre in Pittsburgh. When the family announced that the 50-year-old boutique would be closing its doors, the community recoiled. Emphatics was highly visible and well loved, not just in Pittsburgh but in international fashion circles. Its imprint would be left on the world of fashion for decades to come.

So it was welcome news for many when, at the beginning of 2015, Phoenix Art Museum (PAM) announced that it would be acquiring the couple’s collection of garments and related ephemera, and soon runway and couture highlights from the 1960s through today would be on view in the museum.

“When they closed the store in 2013, they were advised by Eric Shiner, director of the Andy Warhol Museum, that they had a really important archive and they should place it somewhere,” says Dennita Sewell, PAM’s Jacquie Dorrance Curator of Fashion Design.

“It’s a capsule from a particular time period,” Sewell says. The collection begins in the late 1960s, when the Legatos were regularly traveling to New York City for buying trips. They began to acquire pieces for their shop by designers whose names were unknown to most shoppers at the time, people like John Galliano and Betsey Johnson.

The Legatos expanded their fashion purchasing forays to Paris in the late 1970s through the 1980s, Sewell explains. Emphatics was the first clothing shop in the United States to feature Jean Paul Gaultier. As a result, they began to draw a following of fashion worshipers from New York City and surrounding regions to their cutting-edge Pittsburgh boutique.

“That’s part of why it’s special. They had this very fashion-forward store in a very unlikely place,” Sewell says. The Legatos actively engaged and educated their customers about haute trends and high fashion. Shoppers at Emphatics did not simply come home with loaded shopping bags, they became immersed in a unique cultural lifestyle, as well.

Phoenix Art Museum had the opportunity to purchase the archive last year, and this is the first time that it has been on view in the United States. The museum had to make room in its storage vault for the many new pieces. Sewell estimates there are about 400 items in the collection, and around 80 percent is currently on view, she says.

At the entry to the exhibition, there is a small video-viewing cove that is plastered with images of Karin Legato, looking like a young, bleached-blonde Donatella Versace. The large, airy Steele Gallery is encircled by looks, with ensembles mostly grouped by designer. Most of the garments PAM acquired are unworn and many still have the tags on them. Also on view in the center of the room is an assortment of invitations, posters, perfume bottles and boxes, and other unique ephemera.

There’s a 1984 photo of Karin Legato with Azzedine Alaïa, who had been named fashion designer of the year, at the very first Oscars de la Mode, hosted by the French Ministry of Culture. The south wall is adorned with posters, including three very colorful ones from Issey Miyake’s 1994, 1995 and 1998 runway shows. There’s another poster autographed by Thierry Mugler (“’84 L.A.!”) and a Hitchcock-like parody by Alexander McQueen, titled “The Man Who Knew Too Much,” done in the style of a Vertigo movie poster. 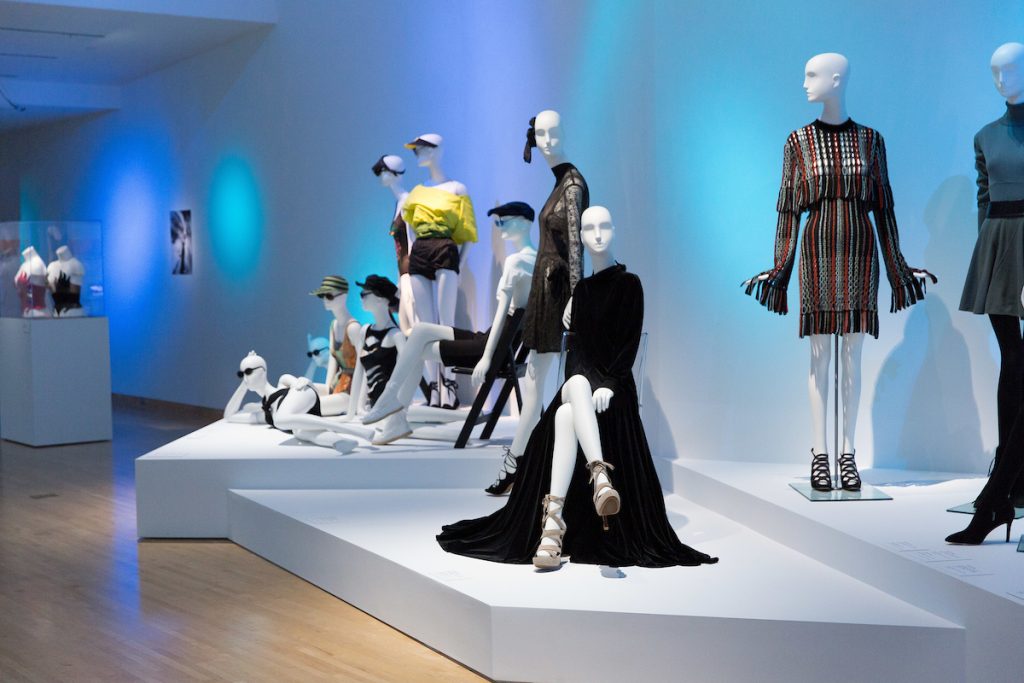 There are many runway videos available to view, including Balenciaga’s shows from the years 2000 through 2010 and Mugler’s shows from 1984 through 1990. Mugler’s late-’80s runway looks, with their poofy jacket sleeves, geometric parkas and tall, spiraling beehive hair, seem like period pieces today, and his iconic red and black “flaming” bustiers look like costumes straight out of a Bob Fosse musical.

In the mix are looks for all seasons, including outerwear and even swimsuits. One section of the gallery features more couture looks in black. An area devoted to Alaïa’s work includes everything from short and flirty pieces to more demure evening dresses. One grouping of mannequins looks like an updated, short-skirt-wearing gaggle of flappers. A gorgeous collection of avant garde black gowns stands nearby, created by Olivier Theyskens, dubbed the dark prince of Belgian Goth. Theyskens outfitted Madonna in her draping satin gown for the 1998 Oscars (think the “Ray of Light” video aesthetic).

Along the west wall are much more varied, high-amplitude color and pattern collections. There’s a small army of velvet blouses for men and women by Gaultier and some incredible deconstructed looks by some of the more obscure designers of the ’80s and ’90s. A very girly, highly patterned dress by Betsey Johnson is flanked by splashy, flashy and flirty ensembles by Norma Kamali. 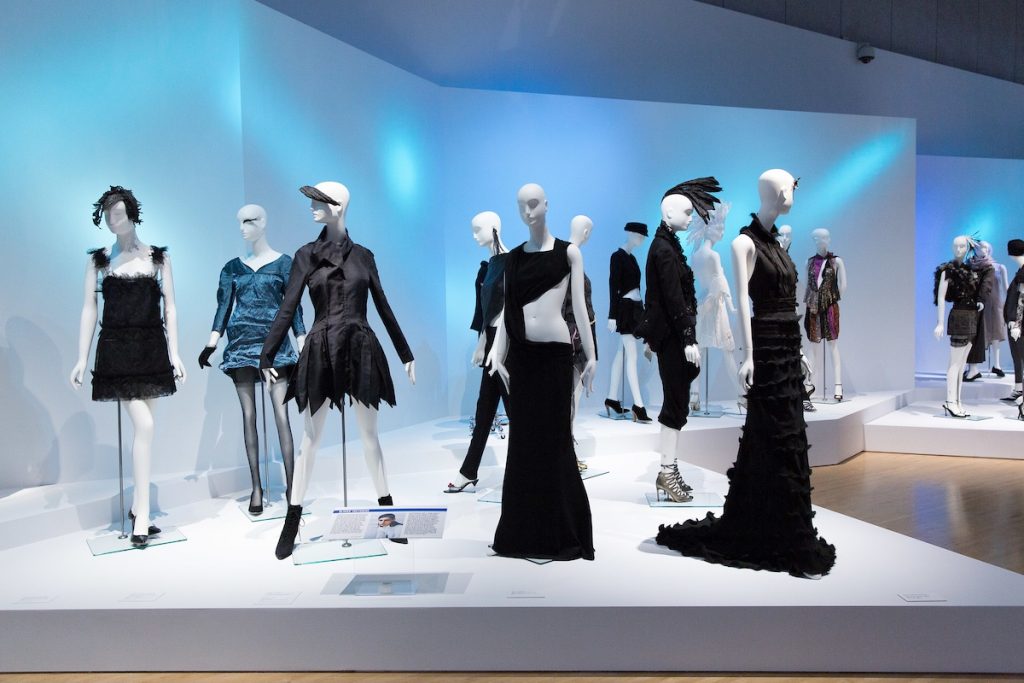 While viewing Emphatics: Avant-Garde Fashion 1963–2013, visitors will get a distinct impression of the highest in trends for each decade, as well as a sense of the most iconic and well-loved selections to grace the display windows of Madison Avenue and the runways of New York and Paris. And to think this collection once lived in the Steel City—the heart of America’s Rust Belt.

Emphatics: Avant-Garde Fashion 1963–2013
Through January 16
Phoenix Art Museum’s Steele Gallery
Admission for this special exhibit is $5 per person in addition to the museum’s regular admission
www.phxart.org/emphatics