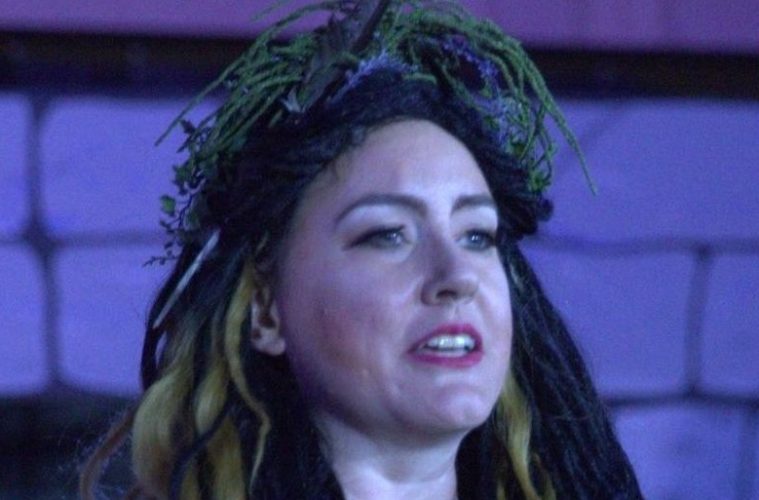 Ilana Lydia is one of the hardest working theatre artists in the Valley. When she isn’t writing plays, she’s directing them. And when she isn’t doing either of those roles, she’s performing. When she’s not on stage, you might catch her as a sound designer. On top of all that, Lydia is running B3 Theater and serving as the associate artistic director of Aside Theatre Company. One might ask, where does she find the energy? Lydia responds with a giggle: “Pig-headedness.”

Underneath a canopy of branches outside Urban Beans Bar & 24 Hour Cafe, Lydia – who has just finished performing in The Convent of Pleasureby Margaret Cavendish at Aside Theatre Co. – reflects on whether or not she marches to the beat of her own drum. Sunbeams descend through the trees off 7th Street. “I try. I certainly try,” she remarks pensively. “I think it may be more accurate to say that I push through, that there is stuff to be done. I do it. And I don’t get deterred easily.”

Lydia was born and raised in Phoenix. She describes the city of her childhood as having a great deal of life and energy to it. She also offers this description: “I found it antagonistic.” Geared more toward parochial-school memories and less toward the city, feelings of antagonism had an impact on Lydia’s artistic and intellectual identity. “I was a Hermione Granger type,” Lydia recalls. “I walked between classes with my nose in a book. I got roundly hated for it.”

A love for reading – for knowledge – was instilled in Lydia by her parents. “They provided me with an appreciation of kindness and a love of intelligence,” she fondly shares. Ilana describes her dad as “hard to faze, funny, and one of the most beautiful guys out there.” Lydia recalls her mom as sarcastic. “She would attack political things, especially local politicians.”

Lydia shares stories about how her mother attended rallies by Arizona’s former, disgraced governor, Evan Mecham, in the 1980s. Her mother would arrange simple, controversial photo shoots at the rallies that aimed to combat the governor’s vitriolic, racist remarks. “My mom was also very spiritual,” Lydia says, overtaken with a calm and reverent tone. “She was a cafeteria spiritualist.” Lydia describes her mother’s interests and passions for exploring all forms of religion and spirituality. “She ended up converting to Hinduism. It was just a very peaceful subculture – Western Hinduism. She found so much joy.”

Lydia’s parents also instilled in her a love of writing. “My father is a writer,” Lydia smiles. “He just finished his thirteenth book.” Lydia shares that her mother wrote poetry, political pieces, flash fiction, and plays.

“We went to Phoenix Theatre and to Tempe Little Theatre. They were the hip theaters when I was growing up.” But when did Ilana’s love of theatre truly begin? When did she find her life-long passion? She remembers when her parents took her to the now defunct Northwest Studios. “It was by the Metrocenter,” Lydia shares, warmly. “I saw a production of Godspell– of all things – and their Judas was so inspiring. I watched it and I came out and said, ‘I want to be a choreographer!’” It wasn’t until later that Lydia discovered what she actually meant: she wanted to be a director.

In addition to attending theatre productions, Lydia also enjoyed hanging out at Great Skate and Rollero. A die-hard fan of science fiction, she loved going to conventions. “I used to go to them before they were well attended. They were typically at hotels in Phoenix.” Lydia begins to chuckle as a memory surfaces. “One time, at a convention, somebody gave me a business card that said, ‘I am Dracula.’ He was wearing a cape, and he was waiting for my reply. I laughed and just walked away.”

Lydia started acting early on. “I was younger, in my teens,” she recounts with hesitation, “and I didn’t particularly like it. I thought, ‘I guess I better just stand here and say words.’” She directed her first show at fifteen – The Belle of Amherstby William Luce, about the life of Emily Dickinson. “There was another director attached to it, but he had the night shift at 7-Eleven. So he would just sleep. I directed it,” she shares with pride. The company that produced the show was called Arizona Contemporary Theatre – Lydia was a founding member. “It went really well. We traveled to teahouses in Phoenix. We even made a little money.”

After high school, Lydia attended Phoenix College for music, becoming heavily involved in the school’s choirs and choruses. While at PC, Ilana planned her next steps. “I did not do well in music theory,” she shares. “I decided to do something different at my next school.” Lydia had developed a connection to philosophy while at PC. One faculty member in particular, Dr. Sullivan, provided her with intellectual challenge and mentorship. “Dr. Sullivan – a staunch conservative, but socially liberal – taught philosophy. We had a merry war,” she says with amusement. “I would write – I realize now – some piece of garbage philosophy paper, and he would read it, mark it up, and tell me that I could do so much better.” With Sullivan’s guidance, Ilana would go on to attend University of Dallas for philosophy and drama.

Lydia describes the University of Dallas culture as intense and close-knit. Within that environment, there was an even more close-knit community of theatre students. Lydia describes it as an exciting time to think and to try new ideas. These positive memories of the theatre school provide a contrast to the philosophy department. “They did not respect me, because I was a liberal and a female,” Lydia recounts with disappointment. “If I had a point, they would never acknowledge me. If I raised my hand, it would go silent.” Lydia received her B.A. in drama and philosophy. “I got the highest academic award in the philosophy department when I graduated.”

Lydia left Texas and went straight to Utah State University as a graduate student in theatre arts, with an emphasis on directing. “There were a handful of us that were very driven people. And we pushed each other. We pushed and pushed,” she says with excitement. “Sarah Jane Hardy was my co-director on two different projects – individual plays that we paired together. I learned more from watching her direct than anyone else.”

Although Lydia had planned to receive an MFA, a family emergency prevented her from completing the degree. “I got my MA, and I did an adaptation of Crime and Punishmentas my thesis.” Upon receiving her master’s degree, Lydia returned home to Phoenix.

Many years have passed since Lydia returned to the desert. She has written picture books, two novels (a third is almost complete), and several plays, in addition to working with theatre companies throughout the Valley in all areas of production. A few years ago, Lydia received an invitation from Franc Gaxiola to join B3 Theater. She would quickly go on to run the company. B3 has produced Lydia’s Droppin’ Johns, A Woman on Stage, The Play of Endings,and The PreCog.Lydia’s plays have also been performed throughout the Valley at Brelby Theatre Company, Space 55, Laughing Pig Theatre, and Now & Then Creative Company.

Now in residence at Aside Theatre, B3’s next production is Empty Words: An Adaptation of Crime and Punishmentby Bryant Mason – a further developed version of the play Lydia directed while attending Utah State University. “The original work of Crime and Punishment tells the story of a former student who gets it in his head that he is extraordinary. And he thinks that he has permission to do violent acts.” Lydia describes the plot with intensity. “It’s the story of a man who is driven insane with guilt.”

Empty Wordsopens this month at Aside Theatre. One has to ask, given the dark nature of the play’s story and the typical approach theaters take for holiday programming, why would Lydia choose to produce such a grim story? “Last year, I looked, and every theatre in the Valley was doing a holiday show in December,” she said. Indeed, there are several adaptations of A Christmas Carolhaunting Valley stages this winter. “We need breaks during the holiday season,” Lydia shares with a humorous, yet pointed tone. “We need a break because the soul needs to breathe during all parts of the year.”

Empty Words: An Adaptation of Crime and Punishment by Bryant Mason performs December 6–22 at Aside Theatre Company, 3508 N. 7th Street, Suite 130B, Phoenix. Tickets cost $15–$20 and can be purchased at the door on in advance at asidetheatre.com. The play is directed by Ilana Lydia and features performances by Faith Decker, Ivy Worsham, Jesse Abrahams, Randy Rice, and Victor Arevalo.