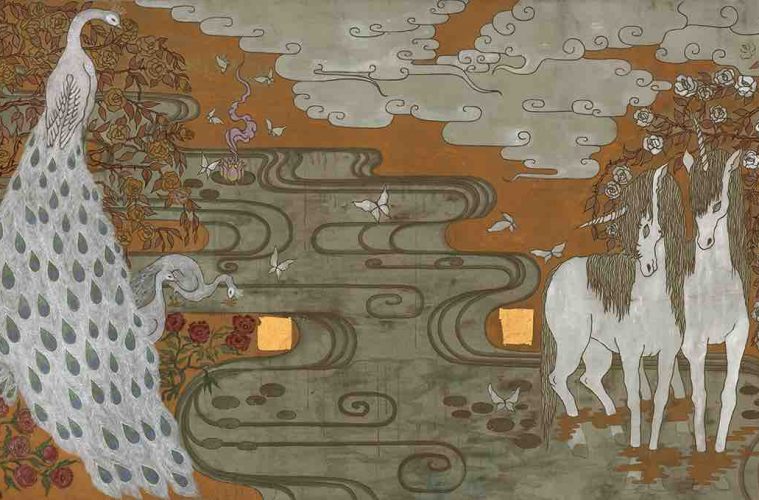 The Myths, Maps and Legends exhibition at the Tempe Center for the Arts (TCA) is yet another outstanding curatorial project by Michelle Dock. Incorporating printmaking, drawing, painting, sculpture, and digital art, it offers a feast for both the eyes and the mind. The idea of “legends” refers to the many pictorial keys that unfold before you as each piece reveals its hidden secrets. Whether this key turns out to be using your own intuition, making a closer examination of the intentions behind each work, or simply relaxing into the slower absorption rate engendered by the viewing experience, delving into the mysteries behind this exhibit is both rich and rewarding.

One of the first series of works you’ll come upon when entering the gallery is Kathryn Maxwell’s entrancing set of images of the cosmos, which give us a different way to experience the proportion of our own perceptions. Moving between bricolage and other models for experiencing the superimposition of elements, Maxwell’s elegant prints point to a feeling for transcendental states that comes from the relationship between all things.

Daniel Martin Diaz’s pieces are also works on paper, but they are all executed in warm auburn tones that give his project an aged feel, while the series overall feels fresh and a part of the contemporary moment.

Diaz is known for delving into esoteric themes but without being didactic. This is because his work is an alchemical mix of poetic inscriptions and imagistic allusions to otherworldly influences, with a specificity that lets you know every element in the composition was placed there with a story in mind.

By contrast, Jen Urso’s pieces seek to capture the kind of pathways that are associated with environments, interactions, subjective utterances, and more.

Her working methodology often consists of diagramming a call-and-response system that reveals how maps are part the meaning-making process as well as models for wayfinding. Urso’s ability to visualize complex cognitive cartographies is nothing short of a stunning artistic achievement.

The works of Heather Green and Taylor Edwards represent a collaborative form of mapping that investigates the rock-dwelling lizard known as the chuckwalla. By using diary entries, scientific descriptions, and fragments from real landscapes, they portray the ways the chuckwalla inhabits our collective imagination, while pointing to our shared responsibility to protect this desert dweller in the real world.

Unlike all of the aforementioned pieces, Lena Klett’s works aren’t to be found in the main gallery but are instead located next to the museum entrance in an exhibition case that announces the show. It’s safe to assume that this is because Klett has become known for her work mapping the interstitial places, objects, and experiences that are all around us by placing a pictorial emphasis on relationality.

While Klett’s contributions to this show highlight the visceral qualities that exist between discrete intension and artistic intervention, the digital prints of Xinyu Zhang take us into wholly other territories. His images show the seductive power of creating virtual spaces where the artist’s hand appears in the work as a delimited gesture.

Part labyrinthine picture maze, part computational morphology, Zhang’s large canvasses bounce the eye back and forth through visual puzzles that play with the space between embodied reflection and high artifice.

And last but not least, the paintings of Yuko Yabuki stand out as undeniable showstoppers in this exhibit. The sheer size and expressivity of Yabuki’s nearly wall length paintings of jellyfish, octopi, dragons, and unicorns reveal the hand of a virtuoso talent capable of colliding neo-expressionism with Eastern influences. Rarely have her works been given such an uninterrupted expanse for their display, and they shine all the more for it.

What the pieces in this show share in common is a contemplative measure that asks the viewer to do a little detective work. Be ready to ask yourself questions about what this kind of mapping means today, what fantasies or unconscious reactions they provoke, and why these myths have something just as urgent to say about the present as any set of images from the past.

Tempe Center for the Arts