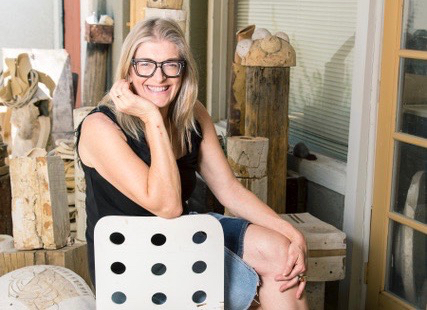 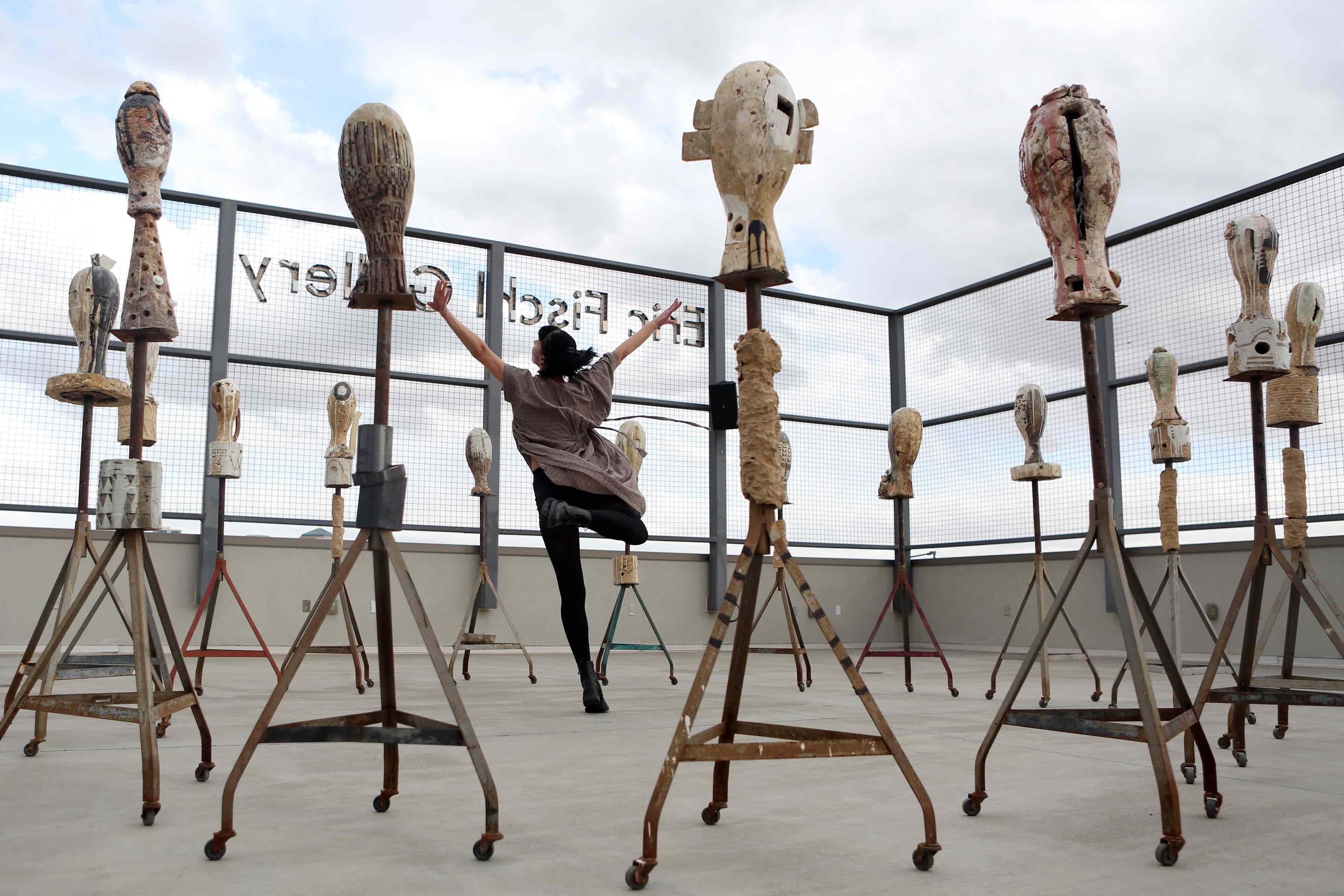 “Clay is the best material in so many ways,” Patricia Sannit explains as we sit in her North Phoenix studio. “It’s one of the few materials that archeologists use to track human experience. You can look at pots made eight thousand years ago and there’ll be fingerprints on them. That connection to our past and the way you can sort of track human technological developments through how they use material is really interesting.”

Sannit’s art practice is rooted in the materiality of clay, but her work transcends the corporeal to communicate broader ideas of time, humanity, and civilization. Her interest in both science and art infuses her ceramic pieces with the ability to incite the senses as well as stimulate the mind. “My work really is about connecting universal values and presenting those things to the world. I do think that art can change lives, and I do feel like presenting art hopefully opens doors and demonstrates the commonality between people.” 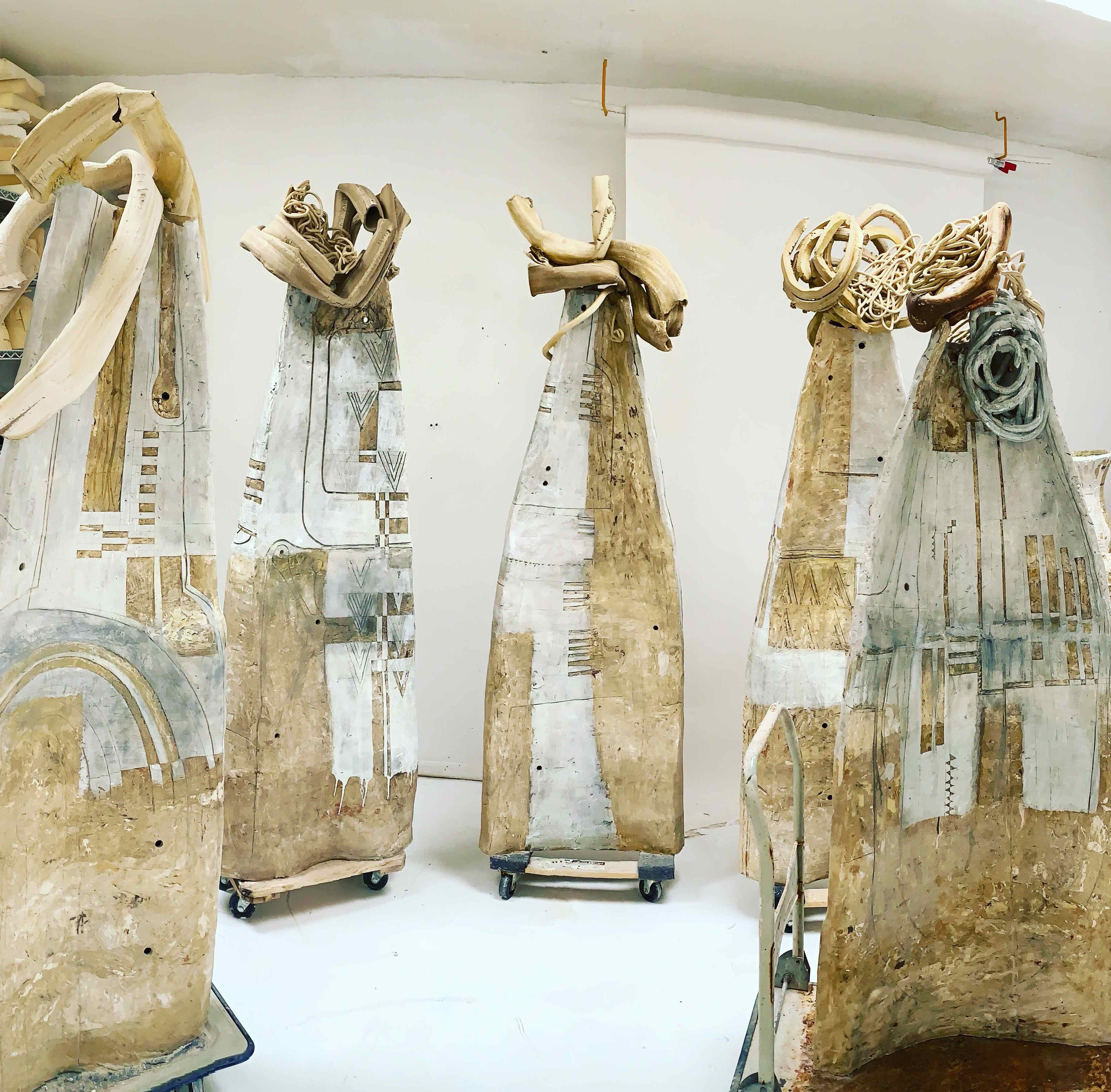 An only child, Sannit was born and raised in Cleveland, Ohio. She spent a large part of her childhood in Minnesota and was exposed to art and culture from an early age. Her mother is of Swedish descent, and her father had connections to Norway, so in high school Sannit participated in a student exchange program to Norway. “As soon as I went and lived in another country, I became more aware of the global perspective that comes when you live elsewhere. I had always grown up surrounded by Scandinavian textiles, weavings, and a lot of art. My parents were very generous with their support of my interest in art.”

Sannit had spent a year at a liberal arts college in Minnesota, but Norway made such an impression on the burgeoning artist that she went back to study fine art. There she was able to immerse herself in a ceramics studio for the first time in her life. She had always taken classes in clay; however, she’d never had access to a ceramics studio 24 hours a day. This experience would begin her lifelong devotion to studio work. To this day, she keeps up a studio regimen. “I’m someone who thinks it’s important to make a lot of work, because I learn best by making,” she said. “I don’t really draw out ideas. I write ideas down. I write more conceptually, but in terms of actually making things – that’s when I learn something. Things change during the making process, and then I know better what I’m doing and what I’m really interested in.” 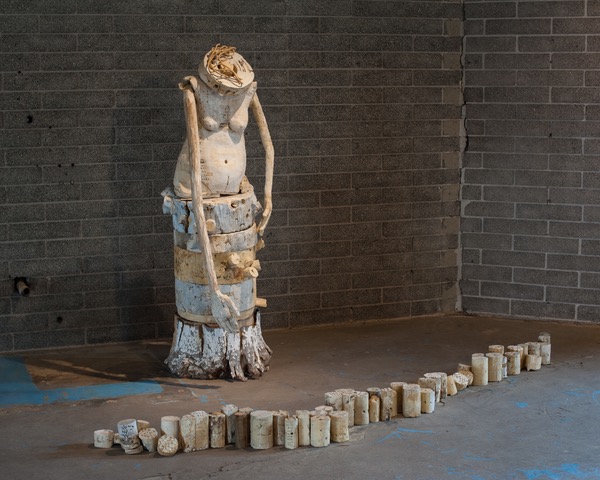 Although school would be beneficial for Sannit, life experience outside of the classroom was a more powerful influence on her work. She pursued her interest in history and, more specifically, archaeology during breaks from school by working in Syria and travelling to Israel. She fondly remembers digging at a significant archaeological site in Jordan called Ain Ghazal.

“Working in the dig with the clay, that was a wonderful experience. When you sit in the middle of an archaeological pit surrounded by shards from eight thousand years ago, you suddenly feel deeply connected to the entirety of the human experience, and you understand the depth of time. In many ways, it has informed what I’ve done. I feel like we’re all the same, even though I disagree politically with a lot of people. Most of us have the same motivations. We take care of our kids, we worry about our lives, we’re hungry, we’re thirsty, and those are the things most of us are concerned about. Maybe it’s naïve on my part at this point, but I feel like if we understood each other a little more, we wouldn’t be in such a crisis.” 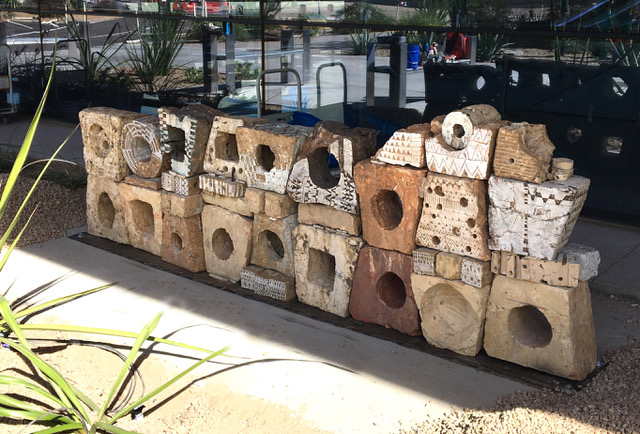 Working in this environment led to Sannit becoming acquainted with archaeologists, paleontologists, and others in scientific fields. She met her husband, Bill Kimbelcurrently the director of the Institute of Human Origins at ASU, when they were working in Syria years ago. “Because of his academic and intellectual background and his contacts with others around the world in the field, my own experience has been broadened multifold by people who research human origins in London and in D.C., across the world,” she said. “Scientists often come through our house. Jane Goodall was here a month ago. These people are part of the community that my husband operates in, so I have benefited from the common knowledge that the human species goes back millions of years. That has a big impact on what I do.”

Sannit has been awarded the prestigious Arlene and Mort Scult Artist Award and had a momentous show at the Phoenix Art Museum (PAM) titled Rise Fall Rise. Through the use of striking human-sized forms fashioned with upturned clay vessels and cylindrical shapes, she managed to speak about how civilizations flourish and fail, only to do it again and again. She made each form in reaction to both historic and current events, yet filtered the responses through her insightful artist’s mind. This resulted in a highly personal observation of something so profound as to be unfathomable. 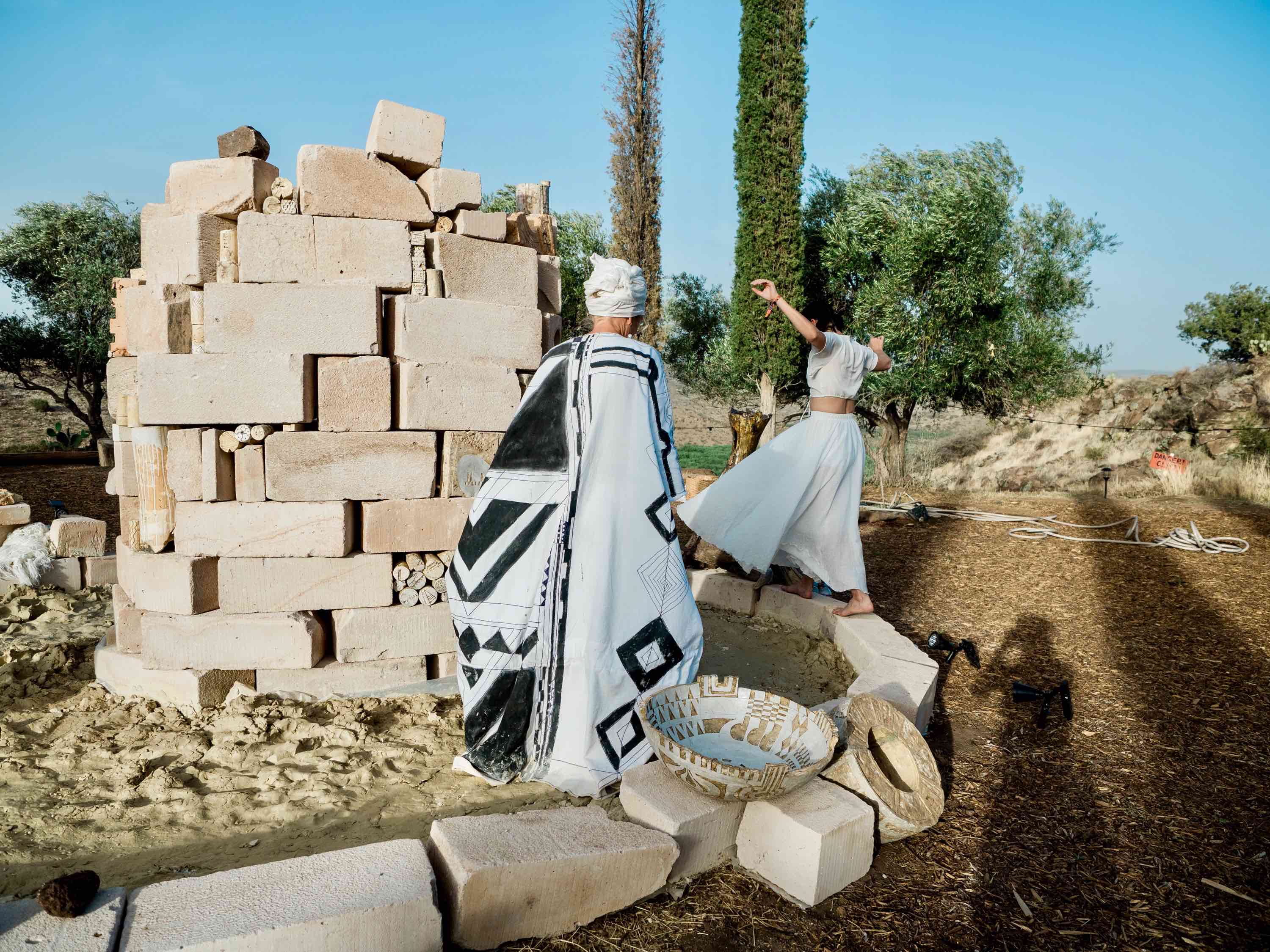 Sannit’s interests have gone well beyond making sculptures. She works to push the boundaries of what can be done with clay, both physically and conceptually. To further her work, she collaborates with artists in varying fields, such as dance and video. She collaborated with dance artist Nicole Olson to choreograph and perform within her installation at PAM. Sannit has had different iterations of an installation in which she walks on wet clay that has been laid out on the ground or floor in conjunction with her modular pieces. She’s been working with Mark Hughes to project moving text and images onto her sculptures, adding even more layers to her already complex work.

“Because sculpture is so static, I started finding individual objects boring, and just so classical. The interactive work that shifts and changes becomes much more interesting. With the video and collaborations, I really want people to interact with the work. Have it become somewhat temporal in a sense that things change through time. That’s like the deepest thesis of my work. Things change through time, but it all cycles back again. As humans, we build and then we destroy, and we build again and we destroy, and we survive. That cyclical nature of time has been the biggest theme in my work. So I want people to start interacting with that.” 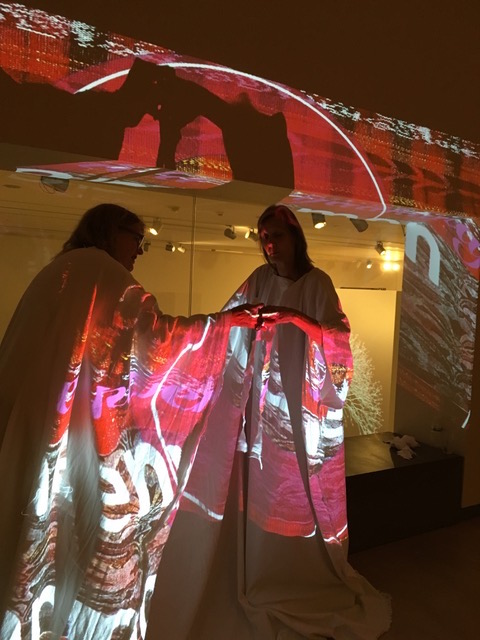 Sannit’s immersion in both scientific and creative endeavors has pushed her work in fascinating ways. Her overarching need to understand the human condition is delicately sustained with scientific rigor. Creative problems are always qualified with laborious research. However, the process of art making is always at the forefront of what comes out of her studio. “I like all material. To see what metal does or what clay does. I’m interested in ink and how it spreads. I like to see how things dry, crack, and erode with time. There is the French expression jolie laide– “the beautiful ugly,” which creates a tension that is interesting. I’m also interested in the tension between order and chaos.” 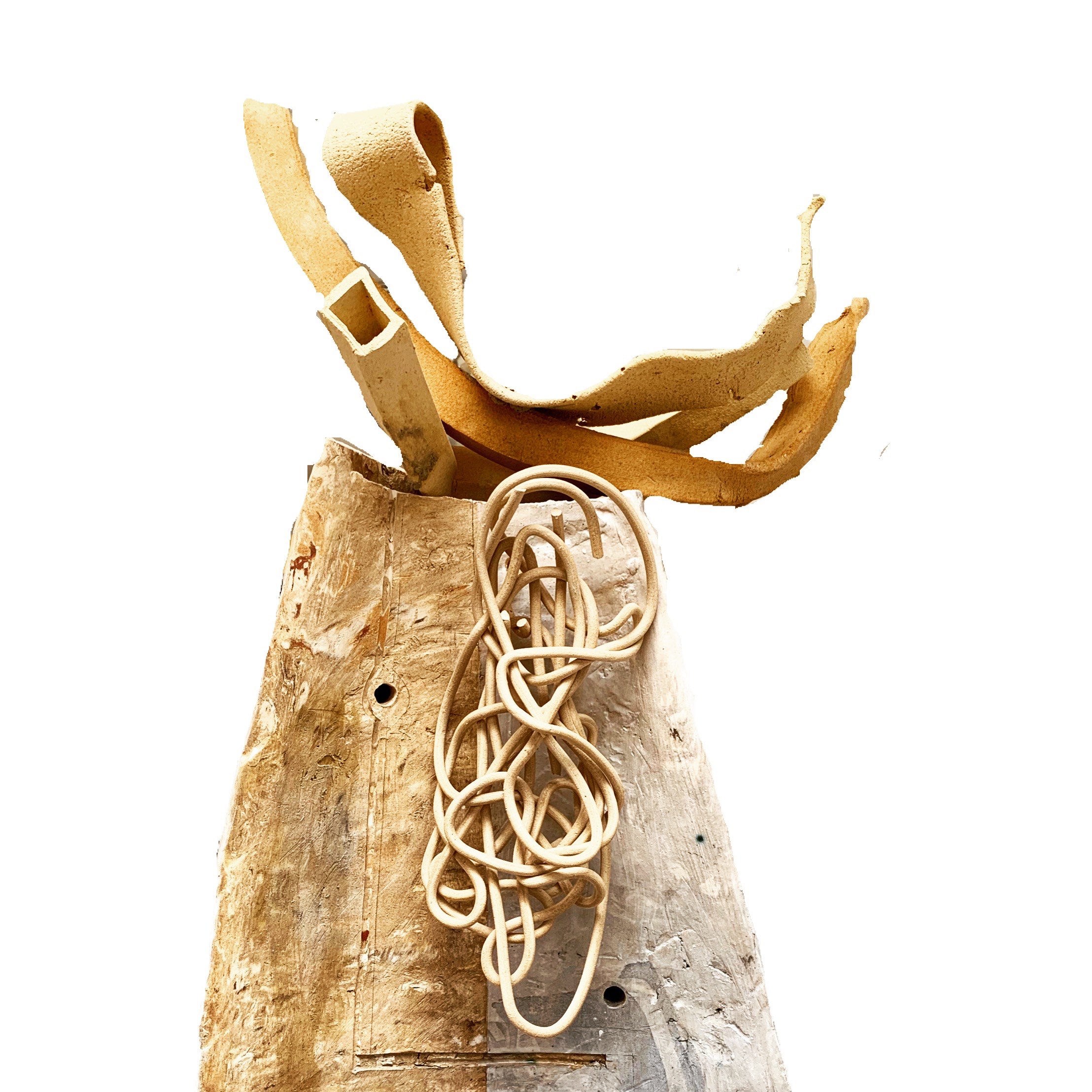 The drive to travel and explore has never left Sannit. This summer, she is in France teaching workshops at the Contemporary Ceramics Centre of La Borne, as well participating in a three-person exhibition. Recently, she finished three six-foot-tall sculptures and two slightly smaller pieces that were commissioned for a Marriott hotel in Texas. Soon she will be working on a commissioned piece that incorporates video with her trademark ceramic sculptures. She continues to show work and will participate in a show at the Joseph Gross Gallery in Tucson this fall.

Sannit’s art practice begins and ends with her medium. Her fascination with clay started when she took an art class as a young child, and her fondness for it has only grown. Ultimately, the success she has garnered is secondary to the work. 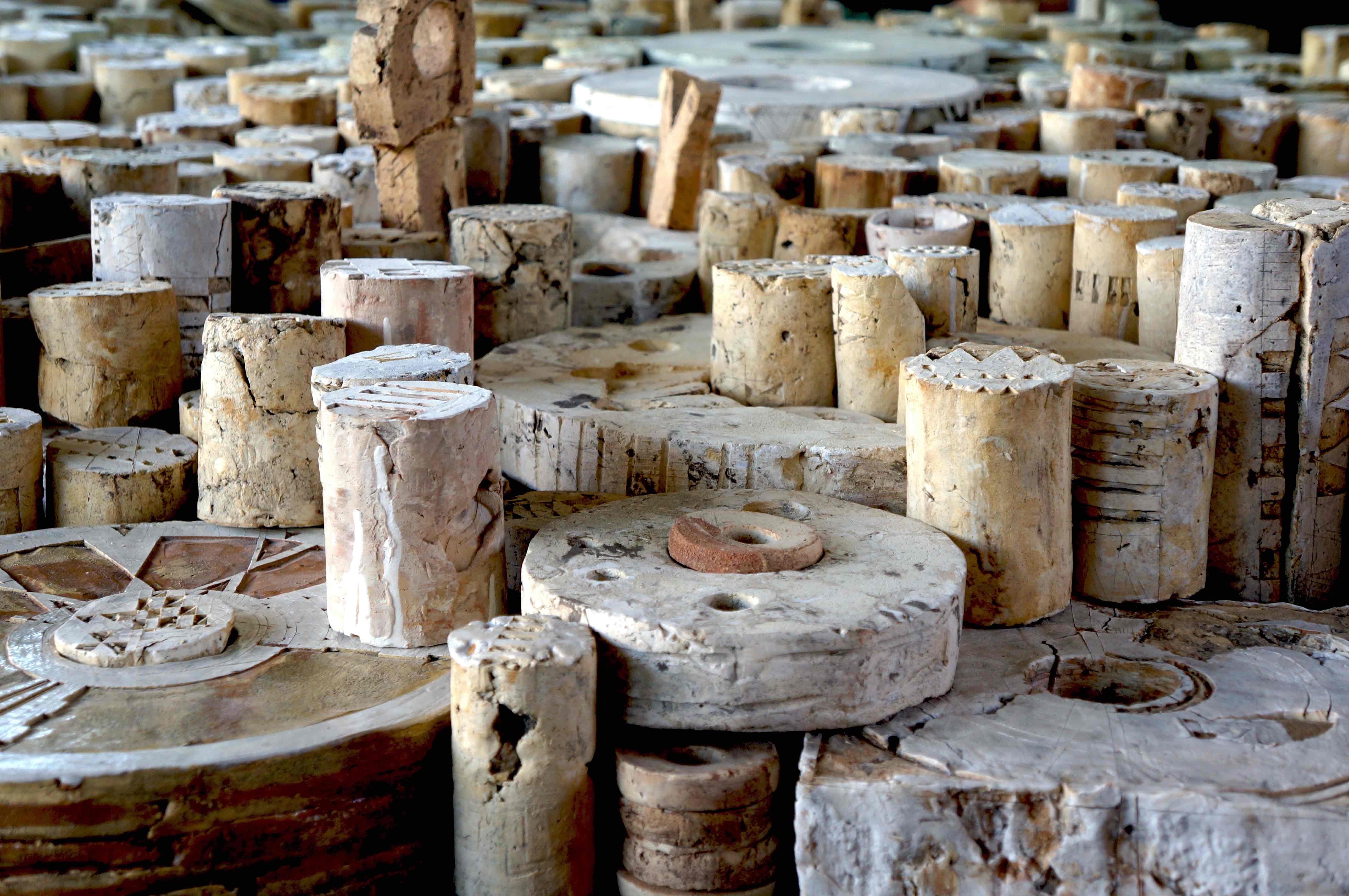 “Clay itself is a material that has a lot of integrity,” she said. “Something about me is just that way. I am who I am. I shun pretension, and I think the material and me are very well suited to each other. We’re both kind of messy and of the Earth, but connected to deeper things.”