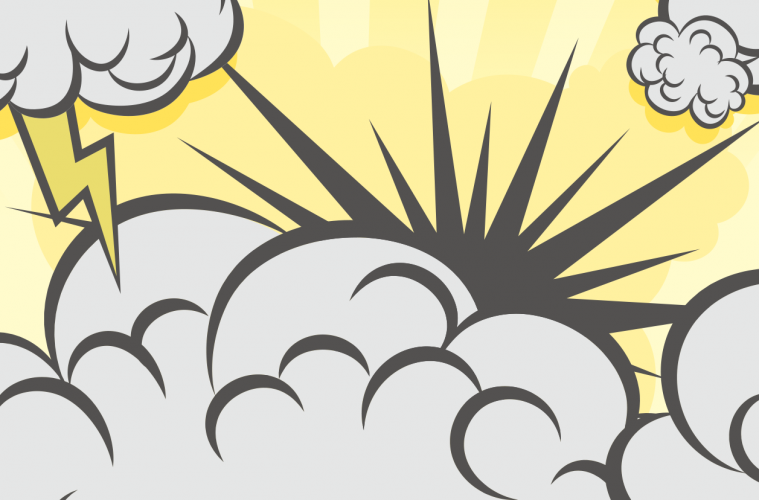 Well, I was in a little fender bender this week. I’m not too sure what happened because it was all so fast and so stupid, the way it went down. The whole incident was just unnecessary. Do you hear this, universe? That did not need to happen.

On the bright side, no one was hurt. And here’s the creepy part. I wasn’t afraid of being hurt from the actual accident. We were all clearly a-okay. But I was afraid that the person who hit me (or I hit him—whatever, Officer Shackleton) was going to pull out a piece because I busted the bumper of his sweet-ass 1990 Lexus sedan.
After impact I followed protocol and made sure we were all alive, and then I got out to see that the other people were okay. But they were just kind of sitting in the car, which initially made me think, “Oh no, there’s some brain damage over here.” But then, I saw the driver talking, looking around and being not dead and thought, “Great, he’s debating whether or not to shoot me.”

I gingerly crept up to the side of his car kind of waving and smiling—but a firm smile to let him know I didn’t think it was my fault. I didn’t have the shared cell phone with me, so I was hoping he would call the cops. I asked him like three times, “Are you calling the cops,” but he was waving at me and I wasn’t sure what that meant. So I asked a girl on a bike if she could call the cops. Do want to know what that b said? “Sorry, I’m late for class.” So, this is just a quick nutshell of modern day car accident etiquette: be scared of being shot and don’t ask anyone to make a phone call—they have to go to class.

After all this I got a rental car, which is way fancier than my car. It has many screens and turn dials and wants me to think I am driving a spaceship. It also wants me to think I am an old lady. I know this because I am a big fan of the scan feature. While on scan the LCD screen displays the name of the radio station and the song you are listening to. But, if there are no details of the station it only displays the genre.

I notice that it blows past any station labeled “contemporary” or “top 40” and stops at every station called “adult hits.” I know what that sassy

When I stopped at Fry’s to get my box of wine, I very thoughtfully pushed the car-off button, so I thought I was okay. But when I got back and opened the trunk, music was playing. My initial reaction is the kidnap scene from Silence of the Lambs—someone is in the back seat—but with a boom box.

screen is telling me: I’m listening to old people music! Even worse, the other day I was enjoying a little Eagles “Hotel California.” When it was over, the station’s trademark slogan played. It was “Even your kids like these tunes—they’re TIMELESS CLASSICS!”

My old car radio never said that to me! I think the spaceship has announcers specifically for the purpose of old-shaming. Here’s what I know, when a radio announcer tries to convince me that I’m cool because I like the music the kids like: I am definitely not in the cool crowd.

There is another feature of this car making me feel like I am reaching early Alzheimer’s. It’s the keyless start. Listen, I know I’m not the beacon of modernity over in my 2007 Hyundai, but I do have power windows and AC. The keyless ignition is just asking for trouble. All you need is to have that key near you and press a button and the car starts. Why? Was it so hard to get the key in there? Was it taking up a lot of time twisting that damn key back and forth, on and off with each ride? I just feel like there are other things that car people can be working on instead of the no key.

I have left the car on no less than five times since having the space car. I think it’s off. And then I think, even if it’s not off, it will turn off because the key is in my pocket and I am leaving the vicinity of the car. Clearly, I am wrong, and I’m terrified of having this car stolen, because I don’t know if my insurance covers a stolen rental car after an accident. So when I stopped at Fry’s to get my box of wine, I very thoughtfully pushed the car-off button and the key was in my pocket, so I thought I was okay. But when I got back to the car and opened the trunk, music was playing. My initial reaction is the kidnap scene from Silence of the Lambs—someone is in the back seat—with a boom box. Then I remembered the magic turn-off button that I can’t seem to master. All I’m saying is, it shouldn’t be that easy to accidentally leave your car on.

According to the auto body repair, I will be getting my antiquated, no screen, twisty key car back next week. I will miss the spaceship, though. I treat it so nicely and never leave orange peels in the cup holders. It’s like being a guest at someone’s house, being all neat and polite. I’m just waiting to get back to my car so I can be the slob that I am, coffee cups and bobby pins strewn all over, listening to adult hits without a rude reminder from that sassy screen.