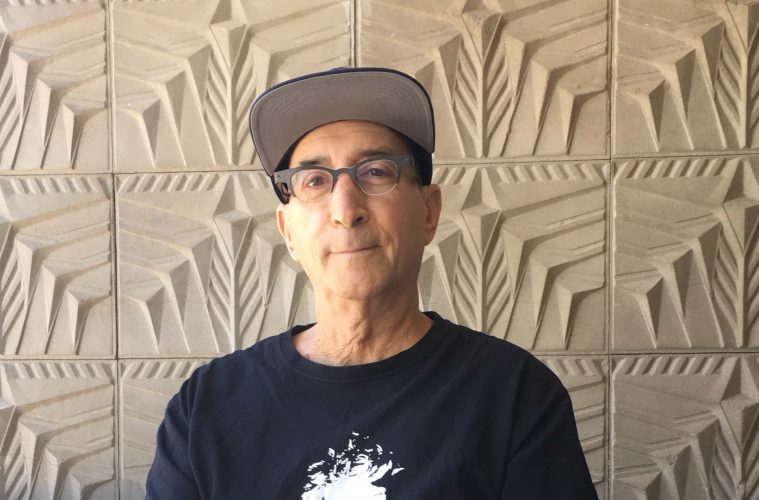 Vincent Saccento: In Remembrance of a Pioneering Spirit

On December 7, 2019, Phoenix lost one of its great creative forces. Vincent Saccento (Viné to anyone who knew him) was a man ahead of his time, anticipating trends in arts, culture, fashion, and community building long before they took hold. Over the years, Saccento wore the hats of a romantic and restless artist and ideologue – musician, restaurateur, salon owner, minimalist, and sustainable living pioneer among them – painting the picture of a larger-than-life force and perennial dreamer.

As friends remember him, though, it is not for his notable entrepreneurial endeavors and innovative thinking, but rather his love of music and good food, his nurturing spirit and supportive nature. He was a staple of Phoenix’s growing downtown scene in its nascent period, and saw his own contributions to that scene as incubators, places where thinkers and creatives could gather to work on their ideas, their passions, their art.

In a Facebook post lamenting Saccento’s passing, Wayne Rainey put it this way: “If you knew him long you knew Viné was an unforgettable and truly brilliant core Phoenician – really a completely unique and interesting man that was always interested in doing something original and rare. He was by no exaggeration a pioneer and a renaissance man. His presence and contributions will be sorely missed.”

Rainey, a pioneering Phoenician in his own right, initially met Saccento in the late ’90s (around the time Rainey opened the monOrchid), and they hit it off immediately. Saccento became a regular at Rainey’s salons, where a dozen or so guests would sit down over spaghetti and wine and discuss problems facing the community, brainstorming ways to make neighborhoods work in sustainable ways. “I hope we see more like him in regards to his willingness to collaborate freely and share an ideology that is about all of society winning – he was very much a ‘for the people’ kind of a guy.”

“He was a one-of-a-kind man,” says Gina Bell Madrid, a partner and friend of Vincent’s for almost two decades. Madrid met Saccento at Lux, where she was the café’s first barista, and the two became romantically and professionally involved soon after, establishing restaurant concepts The Table, Drip (one of the valley’s first organic cafés), and Toast. Madrid recalls Saccento’s obsessions with fashion, Vespa scooters, and Dixie Flyer bicycles – hallmarks of his youthful nature and timeless quality.

Madrid also credits Saccento with helping her on a path to wellness and fitness – a path that eventually led to the pair’s estrangement after being inseparable for years, though they reconnected following the first of two strokes Viné suffered, with Madrid moving into his Mod Box home to take care of him. At the time of his death, she remarked in a post, “My heart is completely broken. I lost a true friend, an old love, and the first renaissance man I ever met.”

Phrases such as “renaissance man” and “one of a kind” are commonly, easily, and lovingly attributed by anyone who spent time with Vincent Saccento.

“Every day we were together discussing ideas, critiquing things – it was very magical, I’ve never had a friend quite like that,” says Kristin Antkoviak, a landscape architect who reconnected with Saccento when she moved back to Phoenix to earn her master’s degree in the field from ASU. The two had initially met in the ’90s at News, a café where Antkoviak served Saccento his regularly ordered burnt bialy, unaware at the time that he was also the owner.

It was a shock to Antkoviak, having initially known Saccento as a bouncing, vibrant figure in his mid-forties, to run into him again all those years later after the strokes, the second of which had left him partially paralyzed, relying on a wheelchair for mobility, but she found his spirit and passion undiminished. “He loved to do things, and we would go everywhere,” she said, a sentiment reiterated by Phoenix hipstorian Marshall Shore. “Even though the strokes slowed him down and changed him, he still had that golden heart you could see right through.”

In 2010, Saccento established v100 Mod Box, a company manufacturing state-of-the-art modular homes that are highly energy efficient and can be assembled without the use of any tools in a matter of days. He chose to install the first three of these homes in a historically redlined area of Phoenix that had yet to capture anyone’s attention.

It was at this point that Shore first came to know Saccento and was impressed by his commitment to the Central Park community. “Really, at a time when there were only a handful of folks who gave a damn about the neighborhood south of downtown, he was one of those folks making it a more viable place and more earth-friendly.” Over the years, Shore and Saccento would continually run into each other, with Shore always being impressed by Saccento’s energy, light, and spirit.

Saccento remained passionate about pushing his Mod Box homes as an economical, environmentally friendly, minimalist lifestyle solution. In a video posted in 2012, he describes the 10 x 10 x 10 cubes as “a soundproof, studio quality box […] – no VOCs, no odors, no dust, and no maintenance. There’s no real risk involved in building this – you and I could build this box. I could hire local, build it anywhere on this planet, so it provides jobs and housing anywhere around the globe.”

Saccento also saw potential for the Mod Box’s use beyond a personal living space, including a small-footprint hotel, and thinking ahead to “the hospice of the future, rehab, hospital, school,” as well as seeing the possibilities from social and humanitarian standpoints. “People with special needs are displaced constantly – I want to see that go away. They need each other, so I want to build these communities where they have each other, and they stay there, and they own it, and it’s done.” As someone who self-identified as being on the spectrum, this was a particularly important part of Saccento’s motivation in promoting the importance and viability of the Mod Box.

“He never gave up on pushing the Mod Box forward,” affirms Antkoviak (who spent the last six years with Saccento in what she describes fondly as “a friendship and a loveship”). “He was always wheeling and dealing trying to push it forward, but it was such a big undertaking.” She also echoes Shore in highlighting the importance of where Saccento chose to install the prototypes.

“They did the prototypes of the Mod Box in the Central Park neighborhood, just south of Chase Field.” As he did this, he saw how much work needed to be done. “He was so instrumental in our neighborhood tree plantings and bringing the community to life.” Someone who himself hated clutter, Saccento fully supported and encouraged Antkoviak’s work planting and shaping the landscape of the neighborhood.

Everyone who shared remembrances of Saccento points to how much time and encouragement he gave them. “He always encouraged,” continues Antkoviak, “and he did this not just for me, [but] for a lot of people. I was thinking today – just that simple support, time and support, that’s his biggest contribution.” In conversation, Antkoviak drew comparisons between Saccento and Fred Rogers, citing the beloved entertainer’s quote, “In order to be an inventor, you have to be able to imagine something first…before you can make it.”

Imagination was clearly a quality Saccento possessed in abundance. Expounding on sentiments expressed by others, Antkoviak underlines Saccento’s unique, visionary intellect. “He never had to write things down; he would always say that he could see it all in his mind. He was amazing, very different than most. We lived in this atmosphere united by creative discussion and, above all, love.”

In the last years of his life, Vincent Saccento roamed the streets of the Central Park neighborhood, observing and feeling for its inhabitants, continuing to do whatever he could to improve the lives of those in the community, and the ideas never stopped.

Kay Thompson, a lifelong friend of Saccento, recalls that, no matter the circumstance, he always believed in himself – that it would all work out – and he was working right up until the very end, collaborating with people to create a Mod Box coffeehouse design, doing everything with incredible, undiminished energy and optimism. As Marshall Shore puts it, “He was an amazing character in the best sense of the term. There is now a dim light where he was standing.”

A Celebration of Life service will be held at Arcadia City Church (3250 N. 40th Street, Phoenix) on January 29 at 6 p.m. Donations can be made in Vincent’s honor to the Southwest Autism Research and Resource Center (autismcenter.org).