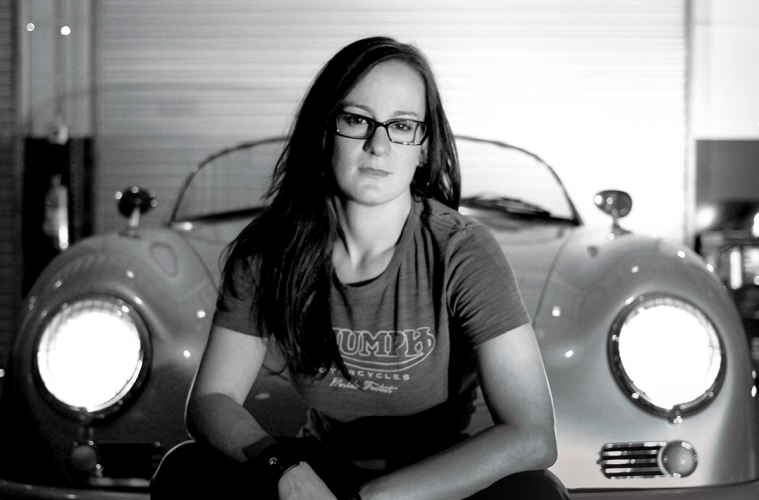 BOGI LATEINER | Have Wrench, Will Travel

To say Sarah “Bogi” Lateiner is driven is both an understatement and a lazy pun. The 38-year-old East Coast transplant is a well-respected mechanic, TV personality, poet and supporter of the arts. She’s focused on making the world a better place, whether it is through educating people about the often-messy world of auto repair, providing interesting space for artists to show their work, or just her way of interacting with other human beings.

Bogi may not be the tallest person in the room, but her presence is both commanding and entirely welcoming at the same time. To put it simply, you listen to her because you want to, not because you have to. For the past eight years or so, she’s been operating 180 Degrees Automotive in central Phoenix. As an ASE-certified mechanic, she isn’t afraid to get under the hood. She welcomes such opportunities and takes pride in owning a shop that provides the opposite (hence 180 degrees) of what people might expect when dealing with a mechanic.

Visitors to Bogi’s shop will quickly notice how different it is. Even though 180 Degrees caters to women, it is not “girly” in any way. If anything, it is gender neutral and appealing to anyone looking for a comfortable and engaging space to wait for their four-wheeled baby. There is art on the walls, and not just any art—good art. Even the counter is an elaborate concrete piece created by her friend Christine Cassano. Like Bogi herself, the space is open and pleasing to the eye, an excellent reflection of the gifted woman who runs the show.

AVA: How did you get the nickname Bogi?

Bogi Lateiner: I got it when I was living in Hungary as an exchange student in high school. It stuck for various reasons.

J: Let’s say you’re sitting at the airport and a friendly person sits down next to you. You smile and they see this as an invitation to start a conversation. When they ask you what you do, what do you tell them?

BL: I generally keep it vague to start. I say that I’m a business owner in Phoenix and do some consulting work with other small businesses. I don’t like telling people about the [television] show (is that weird?), at least not right off the bat. It feels egotistical to me. In business settings, it sounds a little more like: I’m a master mechanic and I own a predominantly female-operated shop in midtown Phoenix, where we specialize in education and making the care experience less scary, dirty and intimidating. I also teach classes to other shop owners to help them provide better customer service, have better employee relations and to help them fall back in love with their businesses.

It’s only if they express interest in what I’m doing that I bring up the show (or if they appear to be doubting that I could possibly legitimately be a mechanic), then I’ll let them know that for the last four years I have been one of the three hosts of the TV show “All Girls Garage” on Velocity channel.  It’s a 30-minute D.I.Y. show focused on education.

J: What brought you to Phoenix?

BL: I landed here after I graduated college. I had decided not to go to law school after all [Bogi graduated from Oberlin College in Ohio with a double major in Law & Society and Women’s Studies, with a minor in Political Science, in only three years], and did some research on automotive trade schools that had a good reputation. I found Universal Technical Institute and it looked great. I knew nothing about Phoenix other than the fact that it was in the same state as the Grand Canyon. I had gone there with family when I was a preteen and I remembered it being beautiful.

I arrived knowing nobody and little about the city or state. I actually moved to Tempe originally and hated it. I moved back to New York after school and never planned on coming back. But life, a boy and other stuff happened, and three-ish years later I ended up back here because I knew the boy would like it. We lived in the West Valley and I was miserable, but then I discovered midtown and downtown, and it fit.

Ten years ago, when I set up shop in central Phoenix, there was this great energy and entrepreneurial spirit. It was like downtown hadn’t really grown up yet and there was this cool sense of becoming. I loved being a part of that (versus living in New York City where everything has already been done). Now 15 years later, I don’t think I’m going anywhere anytime soon (smiles).

J: Where did you grow up?

BL: I was born in Flushing, Queens—but I mostly grew up in North Jersey, in a town called Montclair, about 12 miles west of Manhattan. I feel like I got the best of both worlds. Grew up in a medium-sized town with tree-lined streets and a park down the way, but could hop on a bus and be in Times Square in 20 minutes and enjoy all the vibrancy and diversity of culture in the city.

J: What do your parents think of what you do?

BL: My parents are hippies. They raised us [she has a sister, Jenny] to fight the status quo and stand up for what is right. There was definitely some resistance at first when I decided not to go to law school, though my mom doesn’t like to admit that (smiles). I got the “Guide to U.S. Law Schools” as a gift for at least two years after I made my decision not to go. Gotta love moms.

J: Assuming this is not off limits, are you married, attached, any children? If no children, want children someday?

BL: I am not married, and no children. Though I do have an amazing “niece” (child of a friend who is like a sister) who I love to bits and pieces. I enjoy kids and would love to have one someday, but it’s not going to kill me if I don’t. With my travel and work schedule, I’ve made it pretty hard to date or be in a relationship. But I would definitely like to find “my guy.” It just doesn’t seem like it’s in the cards for me at this point. I can’t complain—I have amazing friends and a fantastic community. And my employees are family—I feel like they are my kids.

BL: Well, my best friend owns Pizza People Pub, so I’m there a lot. I spend a lot of time at Lux, my “other office.” Then it depends on my mood:  Shady’s to Hanny’s, Crescent Ballroom to Valley Bar, and everything in between.  It’s really more about who I’m with, than where I’m at. To be honest, since I travel so much, hanging out at home is pretty darn appealing these days, which is probably why I’m single.

J: Passions outside of cars?

BL: Who said I’m passionate about cars? [Bogi’s smile is infectious.] I’m not what one would typically describe as a car person, and I never thought I’d grow up to be a mechanic. But I love fixing things and building things.

I am trying to find some balance and spend time on other interests, like writing, enjoying the arts, building and supporting community, exploring Arizona on my motorcycle, spending quality time with friends, enjoying great food and wine, raising chickens, doing D.I.Y. projects around the house, and travel that doesn’t have to do with work!

J: How do you like being a TV personality?

BL: Most of the time I love certain aspects, but there are challenges. It has definitely been a huge growth experience. The benefits outweigh the negatives, but I’m not gonna lie—being criticized by “trolls” [on the Internet] can be hard on me. I let it get under my skin more than I should. I’ve experienced the double standard for women in media and how critical and hurtful people can be. I don’t know how really famous people handle it. I’m learning not to look and to laugh it off.  It’s definitely been an interesting journey and one I never expected in my life.

BL: My favorite story is about a sweet little four-year-old girl who “works” on cars with her dad. He does some really fun pictures and videos with her. She was in a car magazine recently and her dad had some shirts made up for her “brand,” Ava’s Mopar Moments. He sent me a shirt and a copy of the magazine. I took a picture of myself wearing the shirt and holding up the article and sent her a wrench ring, like

the one I wear, along with an autographed photo. When she got it, her dad filmed a video of her saying that I’m her hero. Totally made me cry, and I watch it whenever I have a bad day or am doubting myself or feeling like “what’s the point.” She is the point, and all the other little girls (and boys too), whose lives I get to be a part of, in some small way. I hope I help them believe they can do whatever they want when they grow up, no matter what anyone says.

J: What is it about art that grabs you or speaks to you?

BL: I admire the talent of artists and their ability to bring a vision to life. I appreciate when people allow themselves to be vulnerable and expose their souls to the world. Art does that; it touches people in a way that words can’t. Sharing our vulnerability inspires and gives permission for others to be vulnerable, and be who they are.  It’s a connector in a world of so much disconnect.

J: How do you choose the art for the lobby of your shop?

BL: It’s been very organic. We change the art out every three months. Our next show is super cool. The first installation was the Women Mechanics Calendar Project. We had big blown-up pictures. We also had my dad’s art and have had several others. We kind of made the decision that this would be the stepping stone kind of place where someone maybe just starting out can have an opportunity. It’s been very word of mouth. My assistant manager and I make the final call on what to show. I don’t think we’re a place where people come just for the art, but it’s getting there.

J: You teach folks about how to maintain their cars?

BL: I do a lot of different teaching, including a two-hour basic car care class for women.

BL: I tried doing classes for men and women together, but this strange thing happens. The men start taking over and the women drift to the back of the class. Men are really cool and women are really cool, but together they start acting really stupid. It happens automatically, even subconsciously. The whole point of the class is about empowerment, about facing something that intimidates you.

J: What makes a good teacher?

BL: I think empathy and a willingness to reveal and share vulnerabilities. There are not a lot of things I feel comfortable bragging about, but teaching and coaching are things that I’m really good at. I’m not entirely sure what it is: patience, a stubborn faith in humanity, an understanding that we all have stuff that gets in the way of what we want in life. I love seeing the light bulb go on and people start believing in themselves.