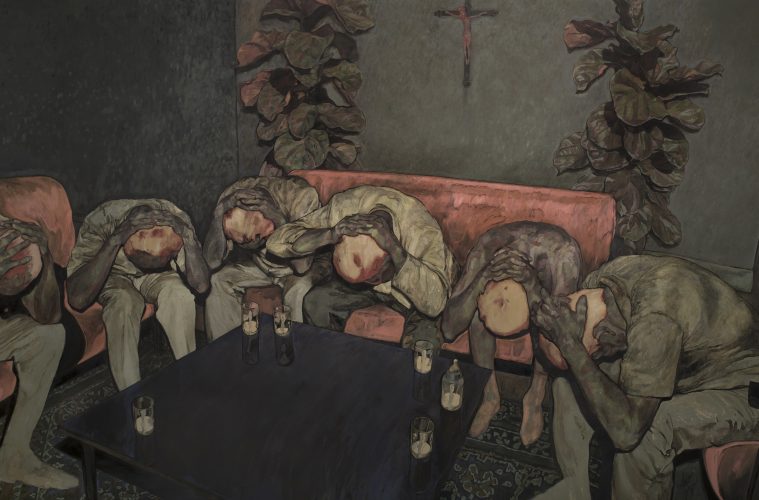 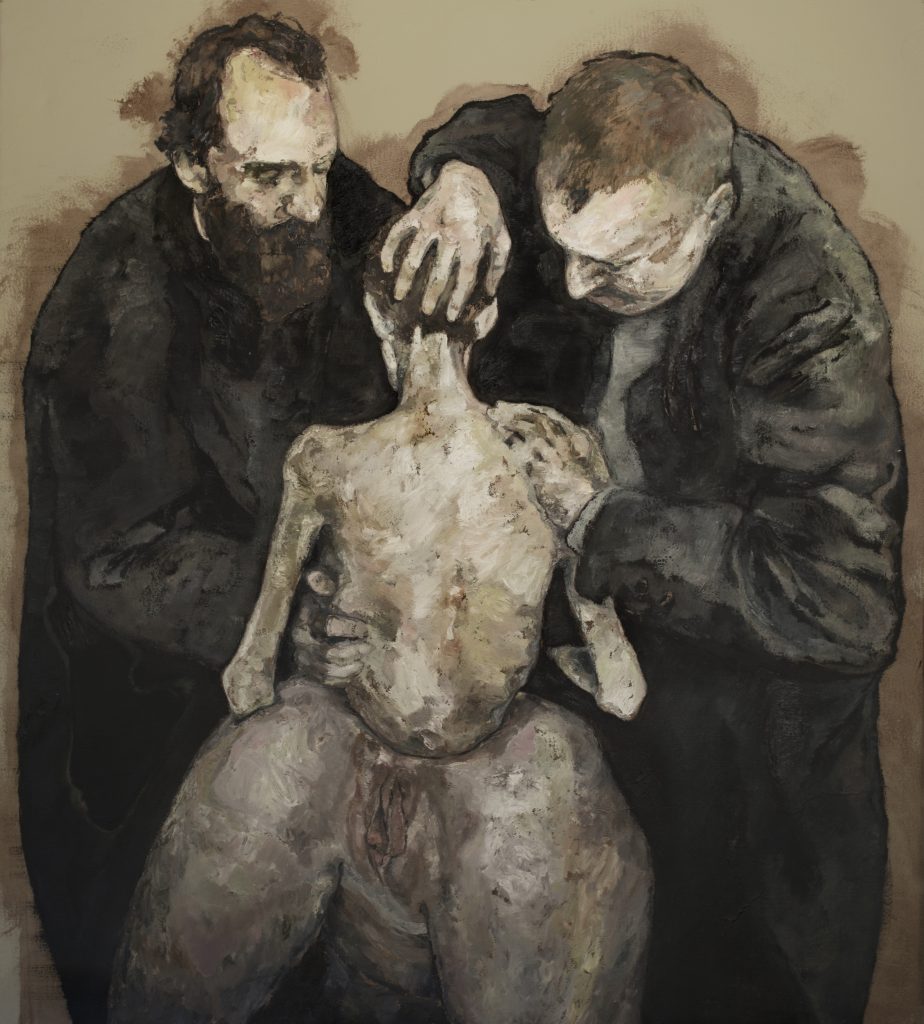 A couple of years after closing and relocating a controversial show in Bisbee, Arizona, painter Eric Kasper continues to produce new works and seems to be growing even braver and more confident in his career.

During this year’s Art Detour, Kasper will open his studio space at 15th Avenue and Pierce to the public for the first time and show completed works and works-in-progress. 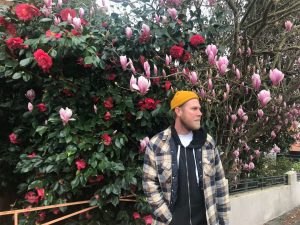 “I will probably open the studio every Third Friday,” he says. “First Friday seems kind of unrealistic for me because of the amount of people who are out and who are not necessarily there for the art.”

Kasper grew up in the Valley and took art classes at Centennial High School. He says he took “all of the art,” but never tried painting until his teacher, Chris Buhrmann, challenged him to try it. 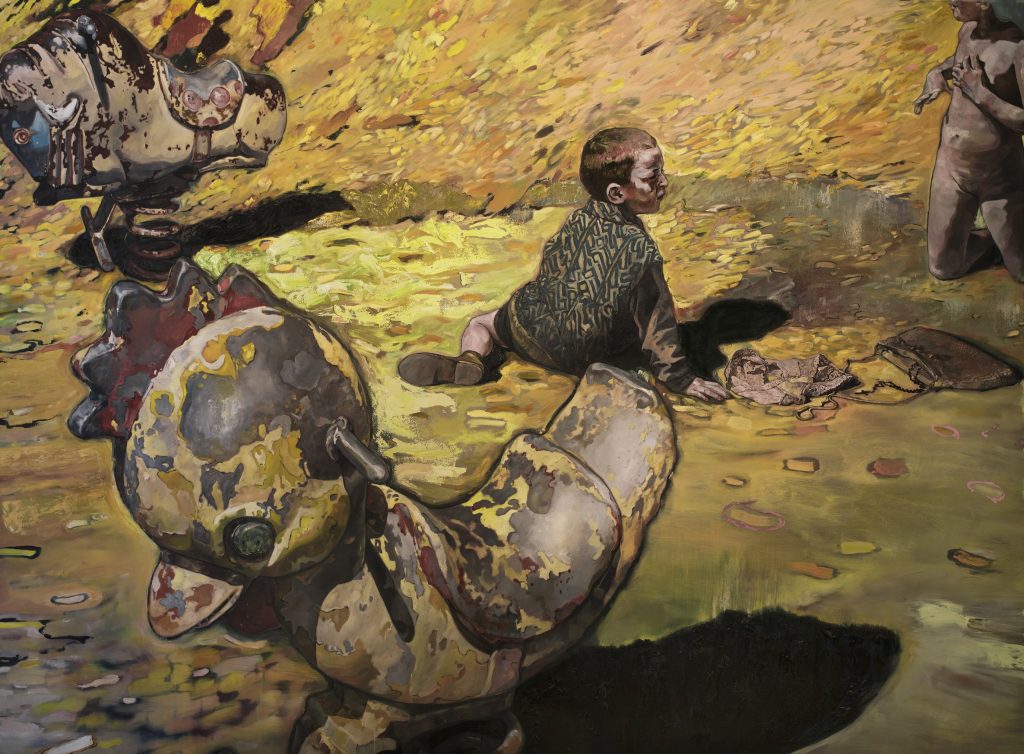 What Kasper says really inspired him about Mr. Buhrmann is that he allowed Kasper to explore different subjects without censoring him.

“He pushed me to learn things on my own, explore different things and figure things out,” Kasper says.

As a high school senior, he tried oil painting and discovered a passion for it. “It was super new and different,” he says. “I didn’t understand it. After high school, I knew it was something I really wanted to keep working at.”

Kasper started working and chose not to go to college, but to continue to work on his art independently. He says that he worried college classes would smother his creativity. 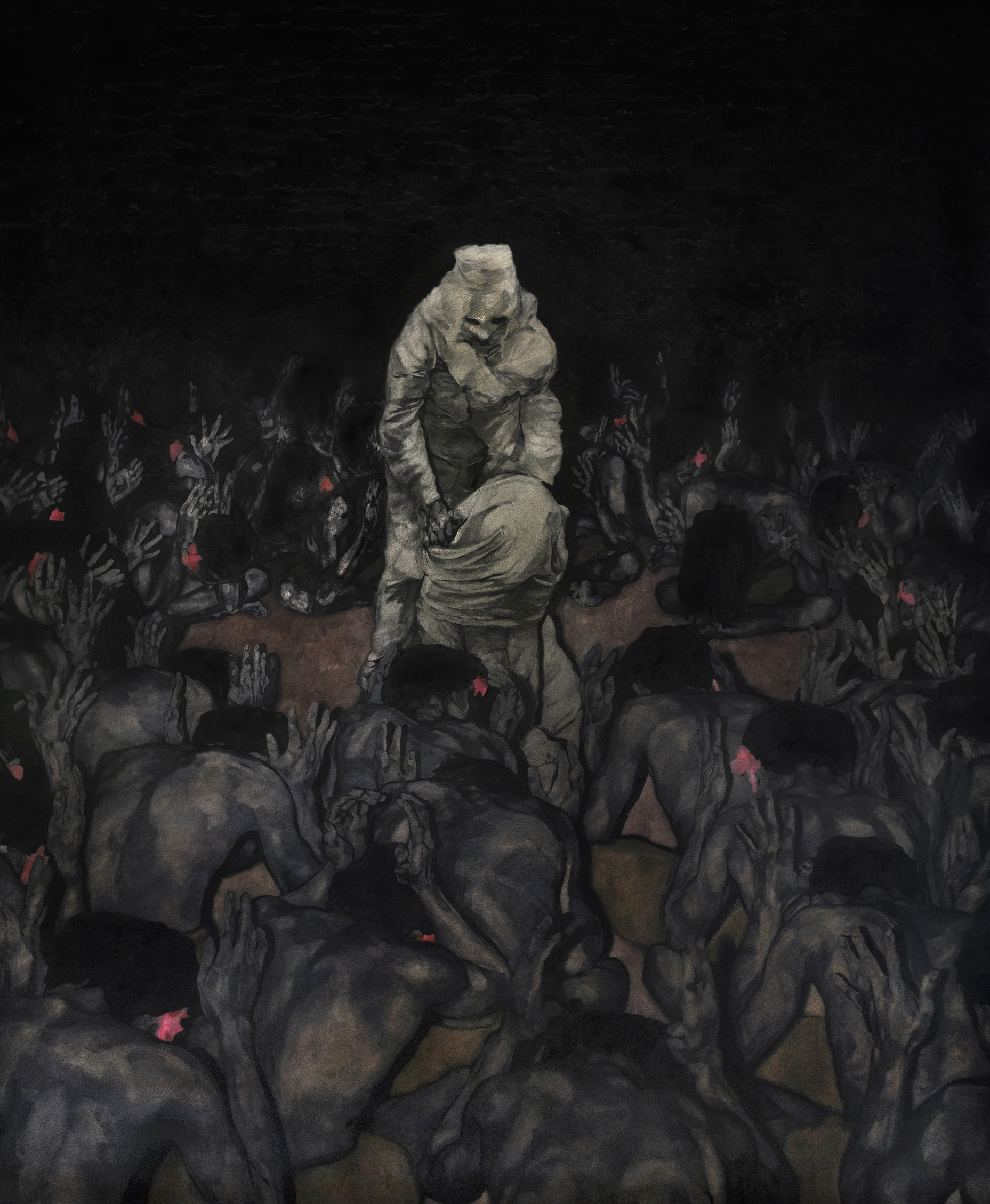 “I am not the kind of person who likes to have projects assigned to me. That’s why [Mr. Buhrmann] was such a great teacher.” Kasper says his teacher gave him assignments, but always allowed Kasper to take them in his own direction.

Kasper has been painting for 14 years. When he opens his studio for Art Detour, he will show seven new paintings and one work-in-progress.

He says it has taken him some time to fully emotionally recover and reset after some of his work received criticism at the show in Bisbee. “For about a year I was really making some bad art. I was overthinking everything. I was fighting with my own visual language that I had developed for 10 years prior to showing that in Bisbee,” he says. 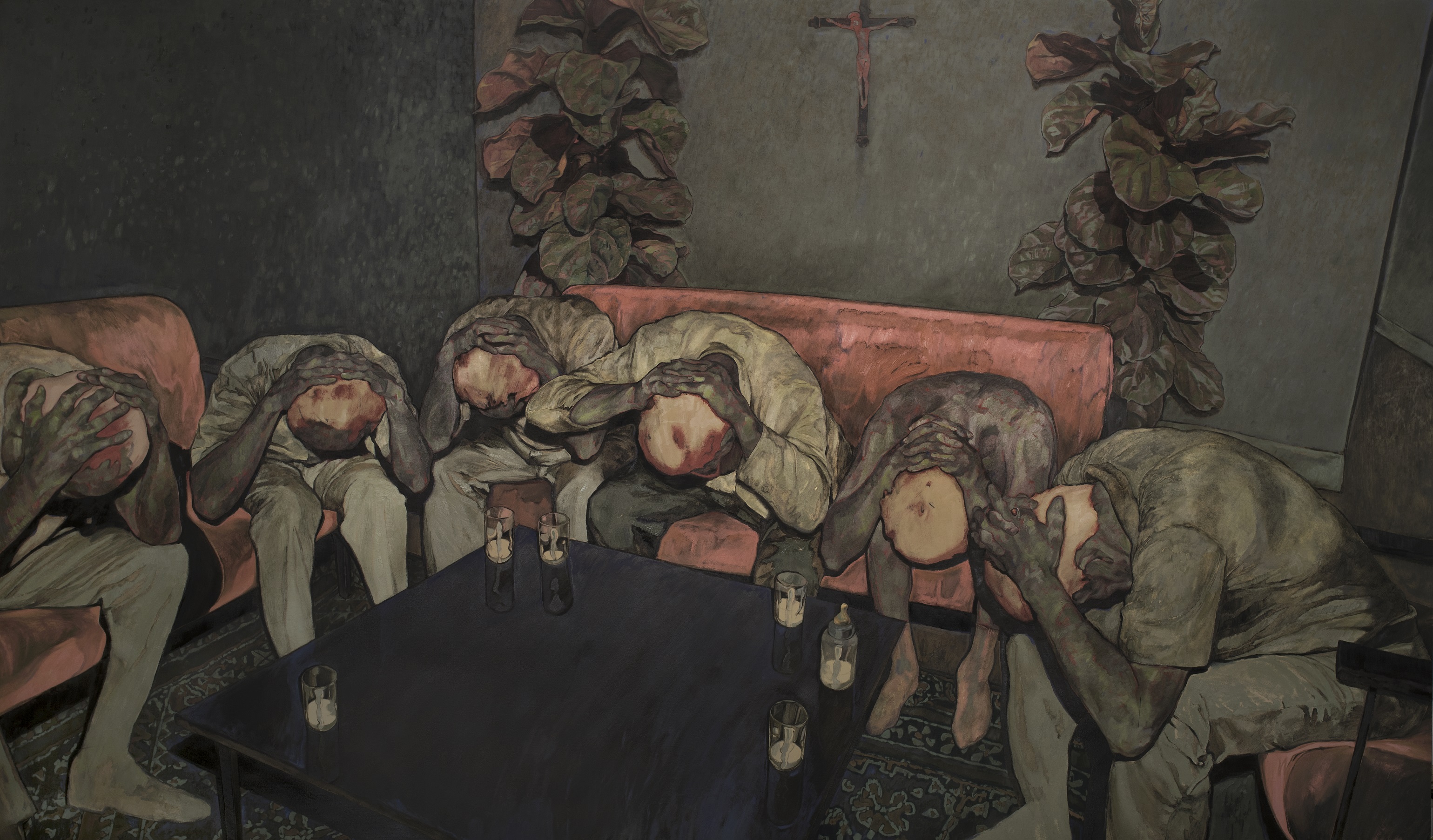 His show was originally closed in the fall of 2015 at Windows Gallery in the Copper Queen Plaza after someone complained that one of the images was lewd. Kasper then moved the show to Sam and Poe. But he says he internalized that reaction and it impacted his work for almost the next whole year. He describes the effect as a sort of self-censorship, prohibiting him from exploring the sometimes edgy subjects he likes to paint. He says he felt the extreme criticism was an attack on his own morals. But through that difficult experience, he was able to gain something new.

“Bisbee was the thing that really helped me realize [what] I need to explore,” he says. “There was a negative reaction to a painting. And just two nights before, I witnessed a person who sat down on the floor, crying, tears of joy. And that person thanked me and told me what that painting meant for them.”

“I had to go back and revisit the whole experience. And that’s how I remembered the really positive experience there.”

These conflicting and almost opposite reactions were a puzzle. But Kasper decided that what he likes to do is produce an image that invites contemplation. He does not intend to explain each piece or assign meaning, he wants each viewer to take away whatever they will take from the work. 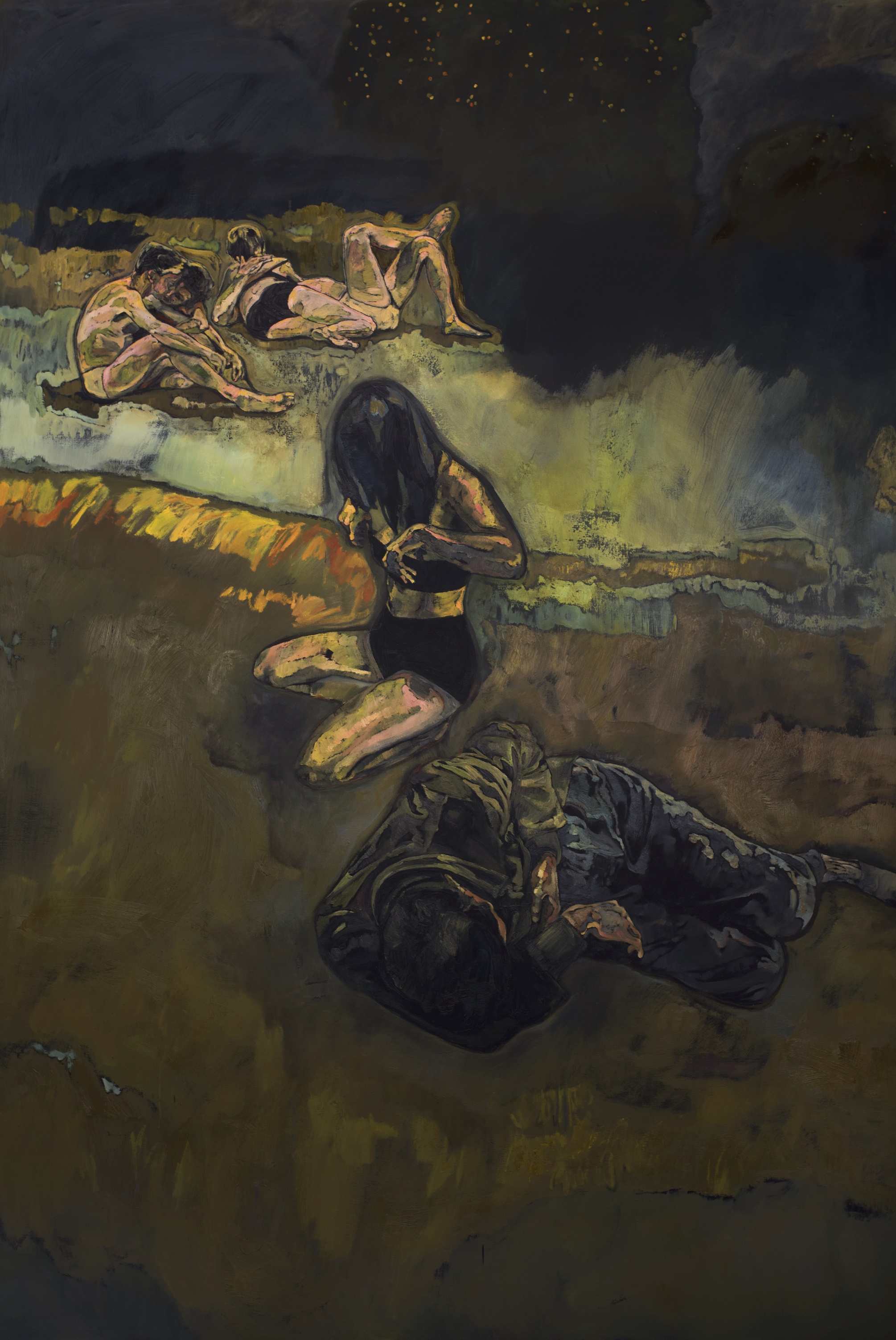 “Everyone brings their own baggage with them. Whether it’s entering a new relationship or going into a gallery and seeing a painting on the wall,” he says. “I like that so much—the interpretation.”

Kasper recently made the decision to quit his job in order to do art full-time. He jokes that it hasn’t quite paid off, yet. He does not have representation, but says there are a few local galleries he would like to present his work to.

“It’s been a nice few months just being in the studio all day,” he says.

This will be the first time he shows a work in progress. Kasper says he feels a little vulnerable opening his work space to the public, but he says he’s also optimistic.