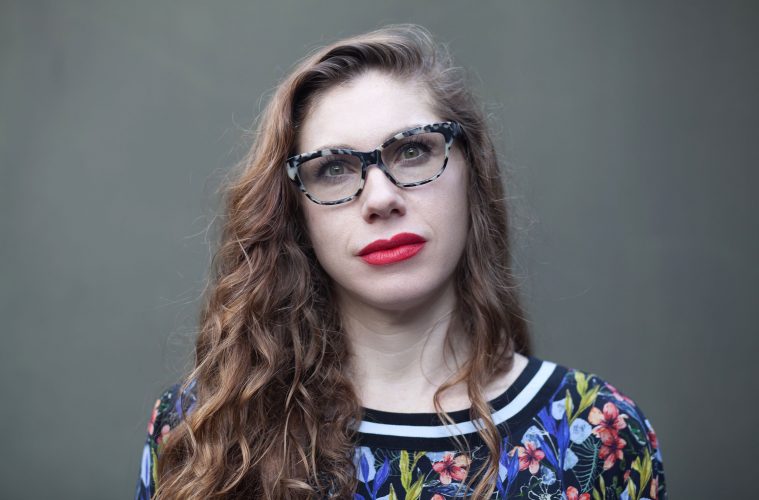 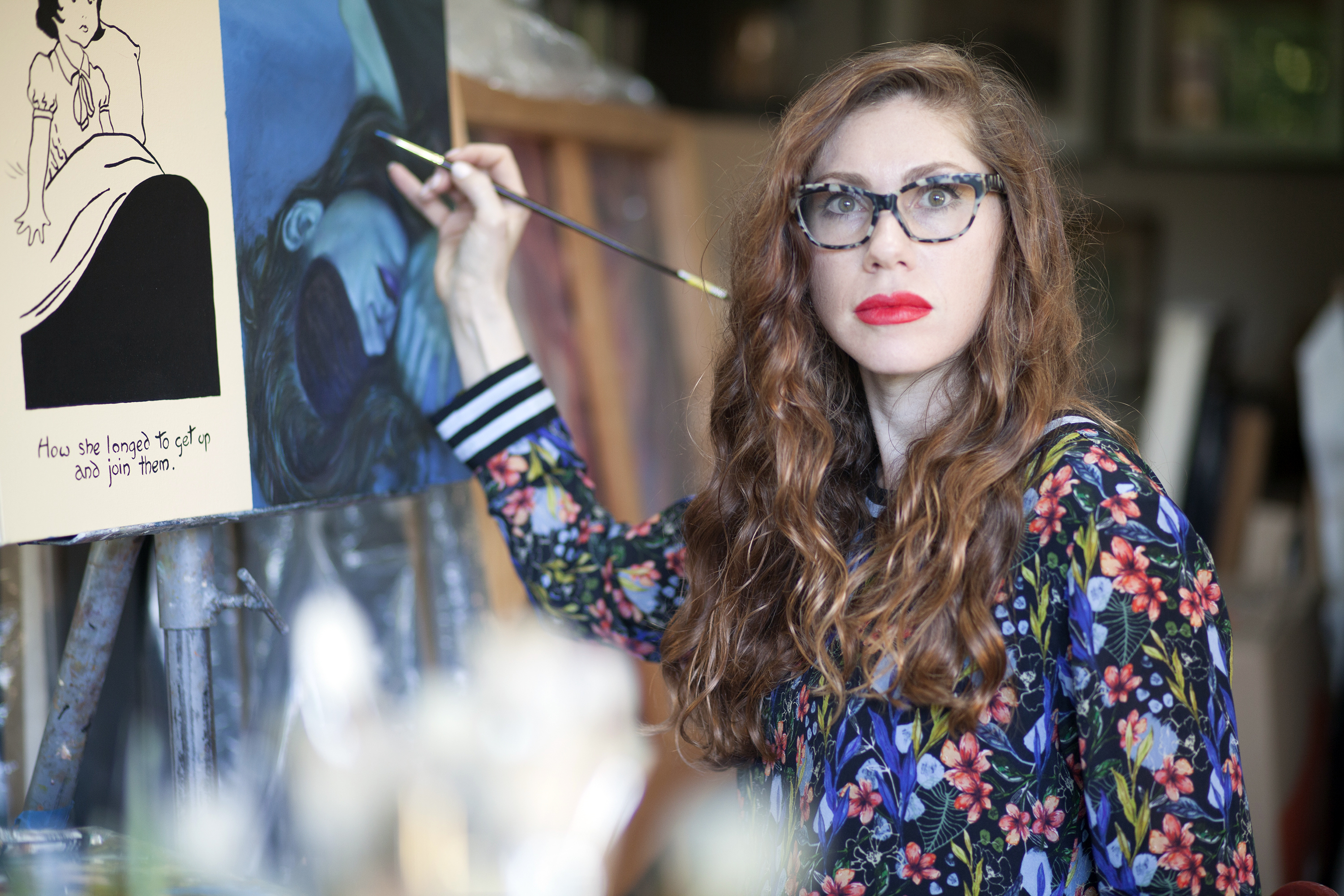 The most memorable art exhibit in the last several years in the Valley was not in a gallery or a museum, but in a former hospital. The show, produced by artist Forrest Solis, was titled L+D, which stood for labor and delivery. It featured large-scale oil paintings depicting the artist in psychologically tinged scenes relating to experiences of childbirth. It was an impactful show, with the immersive environment producing a fitting context for the work.

Since then, Solis has continually created works that deftly touch on women’s issues. Her paintings are not only aesthetically well crafted but also thought provoking. She founded a multi-media project that creates an inclusive space for women to talk about their experiences of giving birth. Meanwhile, she has gained tenure as an art professor and has advanced through the administrative ranks at the School of Art at Arizona State University.

Solis was born in Houston, Texas, and her parents divorced when she was an infant. Solis’ mother took Forrest and moved to a suburb northwest of Chicago, where she remarried. Solis attended the prestigious Chicago Academy for the Arts High School. This early experience would put her on a clear trajectory toward the arts. “It was kind of like the movie Fame, where there were performing arts, creative writing, theater and dance, where every floor had a different art scene,” she said. “At that young age, I learned what it meant to be dedicated to a life of art. There was nothing I would not have done to pursue my life’s path.” 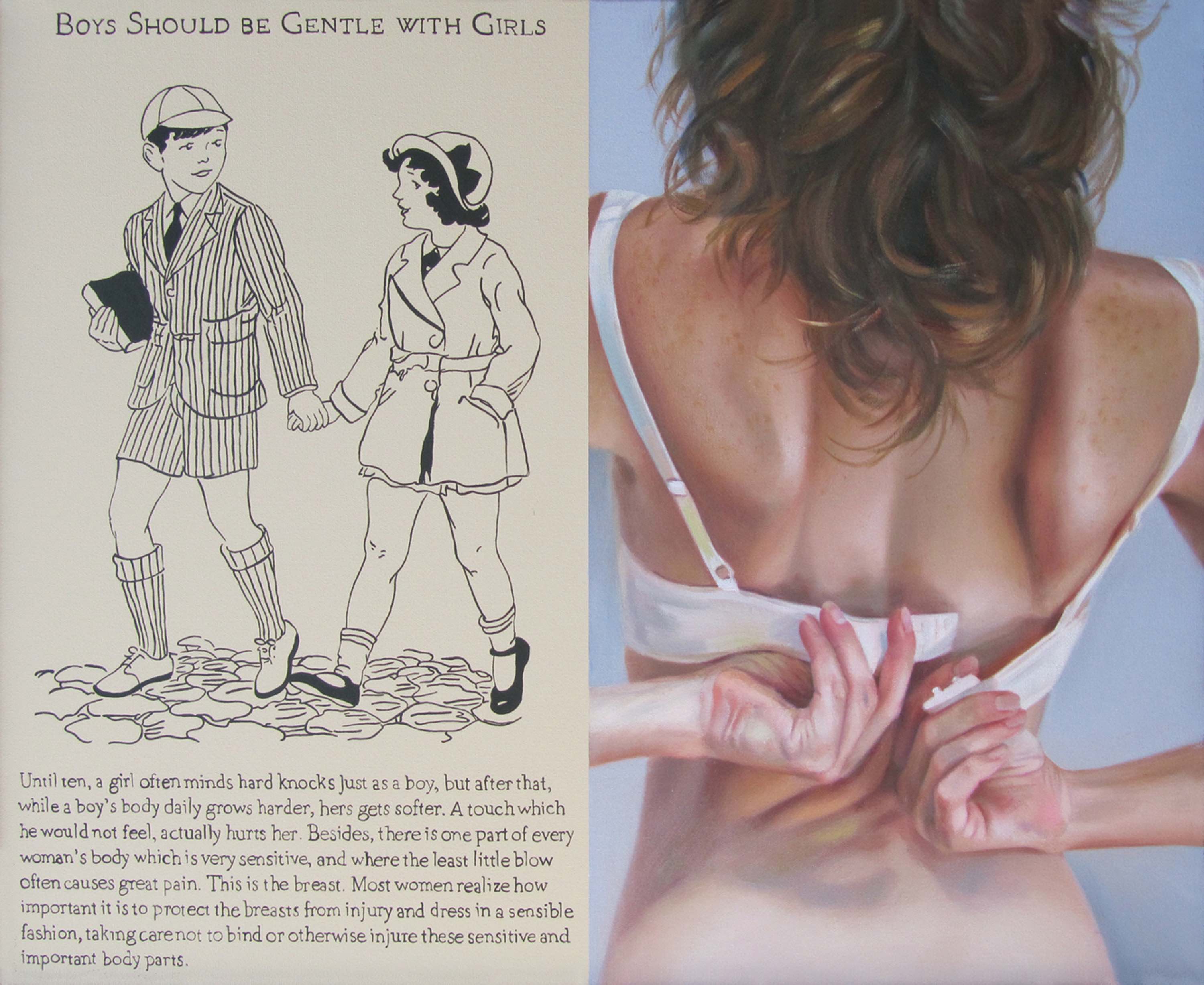 At the same time Solis was flourishing at school, things at home became volatile. Her mother’s relationship soured and became abusive. “Domestic violence is definitely something I’ve experienced, and I was old enough,” Solis said. “I was really aware of what was happening. That definitely made an impression on me, seeing my mother, who was a role model, and who I thought was really strong and assertive, in a situation where she didn’t see a way out because she had three kids and no professional skills other than being a secretary. So she really didn’t see a way out. Then finally it got to a point, like when he broke her nose on Mother’s Day, where she was like, ‘That’s it. Whatever it takes, I will do whatever it takes to get us out of this situation.’ And she did.”

Solis’ admiration for her mother grew, along with her interest in visual art. She’d always had an aptitude for drawing and painting and would find her muse early on. “I was really honestly obsessed with figures,” she said. “I didn’t just draw things, I drew people, at a young age. I almost had an obsession and admiration for my mother. She was gorgeous, very different looking than I am. She was really stunning to me and really smart, graceful, elegant and all those things. I spent my youth in her shadow just admiring her, and I started to really look at women and think about the performance of being a woman, the spectacular nature of it.”

Solis studied painting, earning her BFA at the Kansas City Art Institute and her MFA at Indiana University. After graduating, she taught at a small liberal arts college for three years and then came to Arizona to pursue a tenure-track position in the School of Art at ASU. Solis didn’t see herself as a teacher at first, but she had always admired her teachers throughout her education. It took some time to adjust, but she was determined and has now been teaching courses in figurative drawing and painting for more than a decade. “I work with undergraduate and graduate students,” she said. “I feel privileged to be teaching at ASU, a place that values providing access to a high-quality education. The students are sincere in their desire to learn. Many have overcome challenges to be at ASU, and I have to live up to that responsibility each time I set foot in the classroom.” 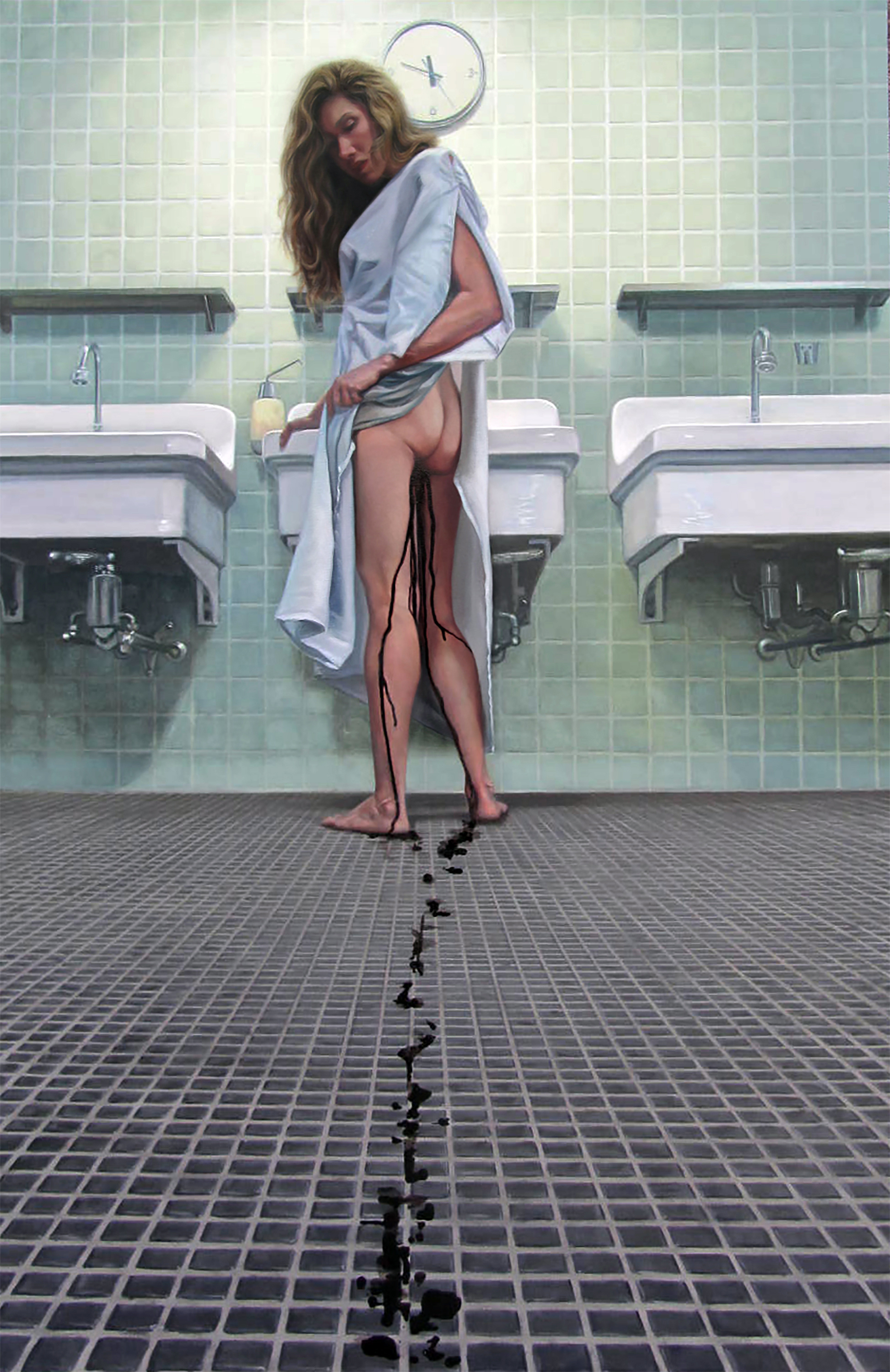 Solis’ admiration for the art program at ASU has grown, and so has she, having been promoted to Associate Director of the School of Art at ASU. She handles matters related to academic affairs and curriculum scheduling along with her regular teaching responsibilities. “Now I’ve really started enjoying administrative work,” she said. “I just find it hyper stimulating in a way that teaching isn’t. Teaching is great because you have to be constantly responding to something in real time. You have to really think on your feet and be insightful. But administrative work is like running five households with ten kids or something. There’s just so much to do simultaneously, and it’s all very important. It is meaningful when you get something accomplished, so it’s stimulating in a way that I find very fulfilling.”

Solis has been creating engaging paintings throughout her career. An early body of work juxtaposed passages from old books on how to act like a “proper” woman with contemporary scenes. Another body of work delved into her interpersonal psyche through uncanny dolls and toys. Through it all, she has been obsessed with the human form, in particular her own.

“People would ask, ‘Why do you paint yourself?’” she questioned. “Historically, men have been painting self-portraits for centuries. But when women paint self-portraits, it tends to be associated with vanity. There are tons of historical paintings of women looking in the mirror, women observing themselves, and they are all basically allegories for vanity. It is an interesting experience to really look at yourself critically to paint. You’re no longer really seeing yourself as this subjective being. You’re looking so hard to see the form and color, and I’ve found that to be really liberating.”

“I’m talking about ideas that many artists talk about, they just use different subject matter,” Solis said. “They might use animal images rather than the self. They might use landscapes or objects, but the essence can still be about the spirit, religion, or psychological spaces. You can do all of those things. Many artists just pick a particular subject to explore their ideas, and I’ve chosen self-portraits.” 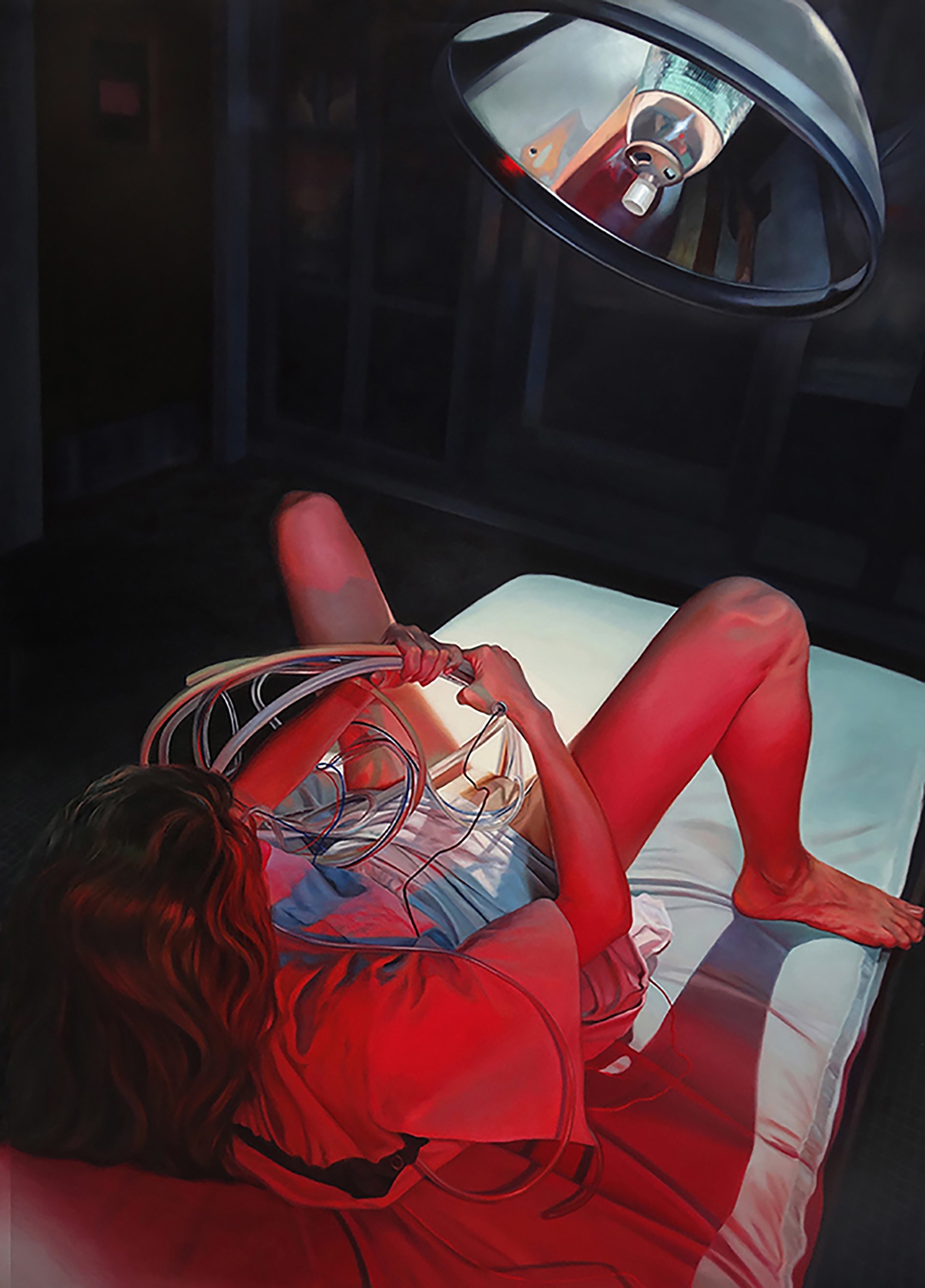 During her time at ASU, Solis became pregnant and gave birth to her son. This life-changing experience led her to establish the multimedia visual art and oral history project Creative Push. “I wanted to make a body of work that was about my birth experience,” she said. “It was pretty intense. So the paintings were supposed to be like horror film stills and were large-scale, really ambitious works. But I also wanted to be able to have other women make artwork about their birth experiences and to also, in the meantime, record those stories. There are all kinds of stories. We’ve recorded everything; we have well over a hundred stories now.”

“We’ve created a film, had a podcast and a few group exhibitions,” Solis said. “So Creative Pushhas really grown. But I just wanted to create a space where a woman could go and listen to lots of different stories with no particular ideology behind them. To just have a space that respects people’s experience as a whole, and then respects artwork about this really challenging topic.”

Solis continues to pursue that mission every day. Her most recent project is 10 Artists/2000 Speculums, wherein 10 women artists were given this medical tool to incorporate into their work somehow. It all started when a local ob-gyn group offered Solis a large batch of speculums. The exhibit, curated by Solis and Lauren R. O’Connell, showcases some of the strongest women artists in the Phoenix area, such as Saskia Jordá, Ann Morton, Cydnei Mallory and Malena Barnhart. 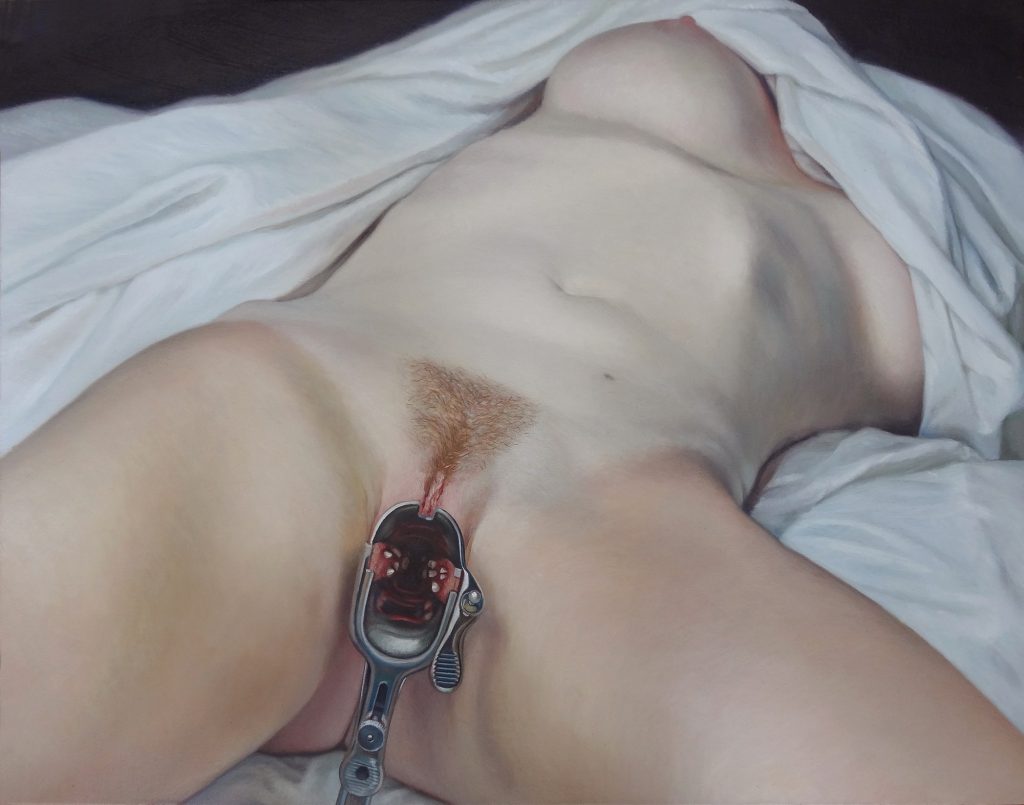 Forrest Solis, “Origin of the Other” (after Courbet’s “L’Origine du Monde”) 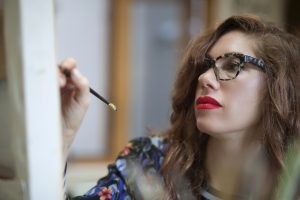 Solis’ painting for the show references Gustave Courbet’s work L’Origine du Monde  (Origin of the World). She has painstakingly recreated the once controversial work, but her self-portrait, titled Origin of the Other, features a golden speculum opening up her own vagina with teeth, representing a kind of vagina dentata. It is part of a body of work that reconstructs Courbet’s paintings, altering their original meaning, as Solis imbues it with her female point of view.

Solis’ work has never been overtly political, but in the era of #MeToo and Time’s Up, one cannot help but see her work as subversive. The act of creating is political statement enough. “I’m not really making work in response to a political situation,” Solis said. “So I feel like I just happen to be in line with something that’s very timely, because I’ve always made work like this. I’ve always made work that’s really assertive. It asserts my femaleness. I really like being female and I feel very powerful as a woman.”