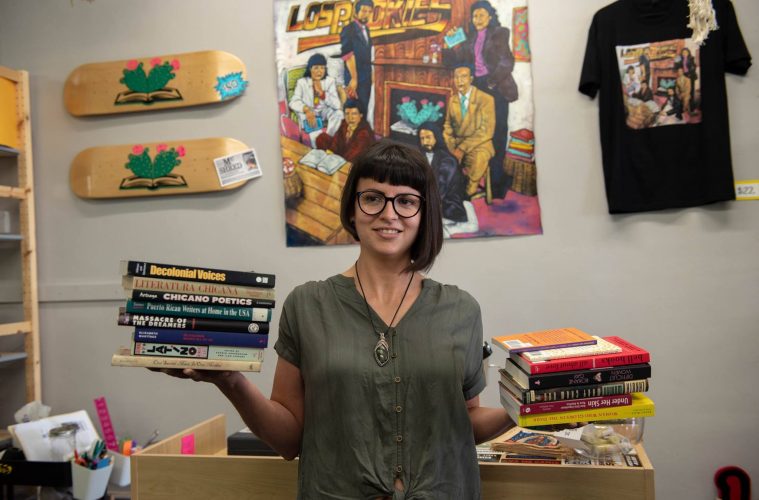 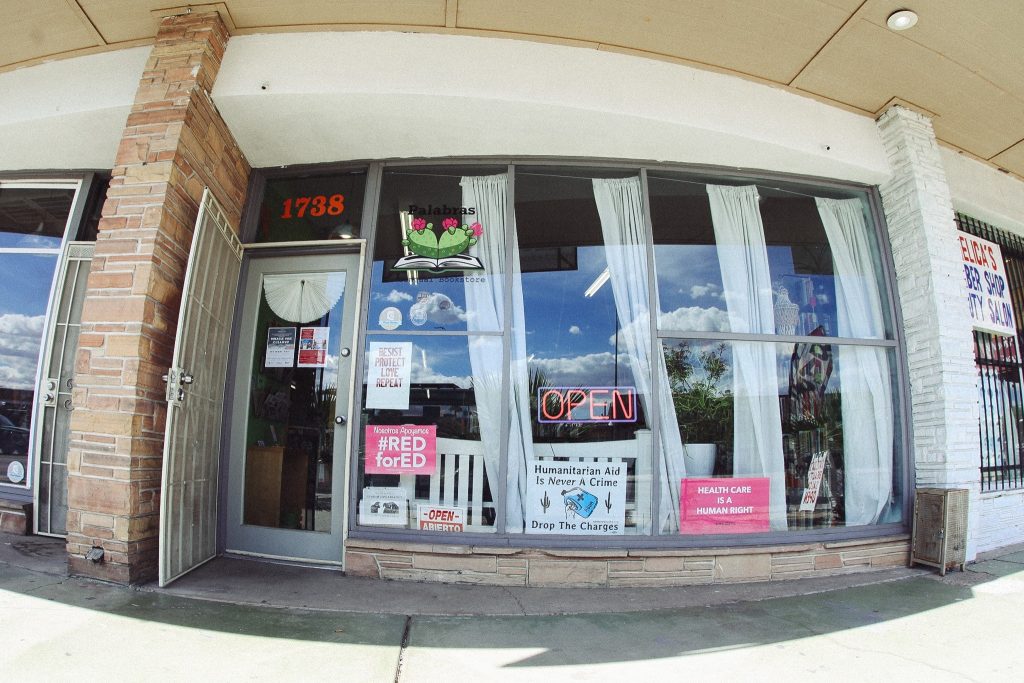 From Miguel de Cervantes’ more than 400-year-old comedy Don Quixote, to the more recent brooding meditations of Roberto Bolaño, Spanish-language literature inspires readers and influences culture across the globe. Despite the rich and growing canon of Spanish letters, for the roughly one-third of Valley residents who speak Spanish as their first language, finding books in their native tongue was almost impossible – until Palabras Bilingual Bookstore opened in late 2016.

Now hosting a slew of events such as “POC It To Me,” Cartonera Collective gatherings, and First Friday art shows, Palabras is a perfect example of how art can change the world. Rosaura “Chawa” Magaña was inspired to establish the bookstore after visiting Librería Donceles, a travelling exhibit by artist and educator Pablo Helguera. Named after a street in Mexico City
famous for its many used booksellers, the installation is a pop-up Spanish-language bookstore meant to expose the gap in the literary landscapes of major US cities. Magaña’s visit left her scratching her head, asking why a city as large and diverse as Phoenix didn’t have a Spanish or bilingual bookstore. 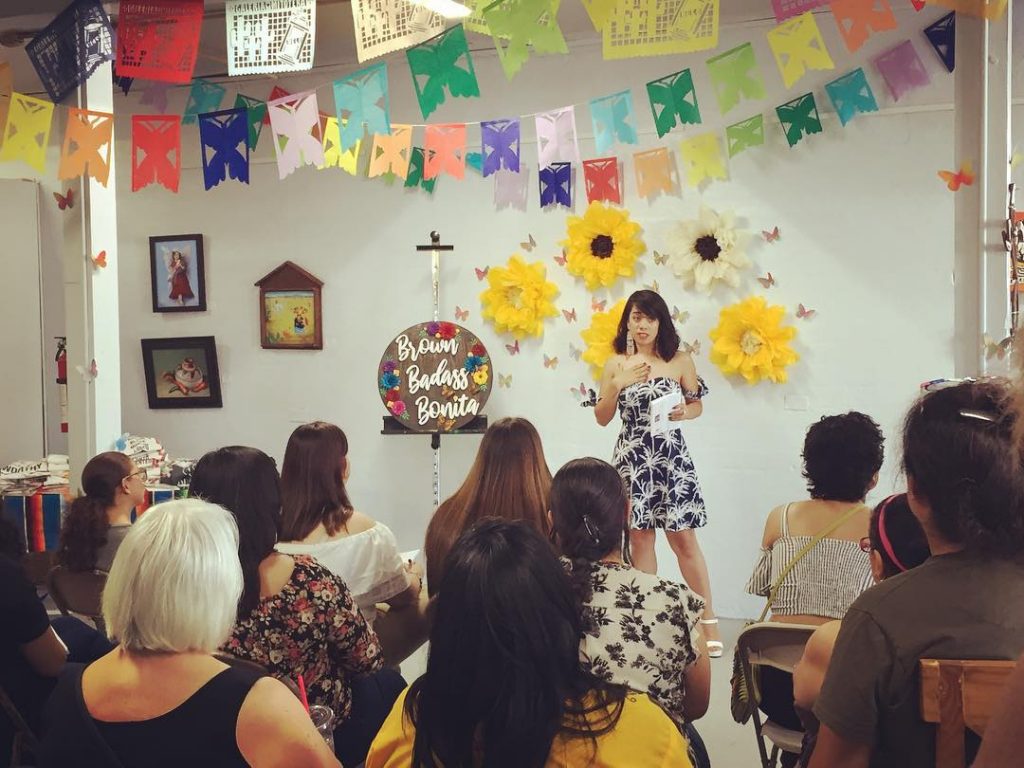 “The concept started out initially about language,” Magaña explained, “but has become much more than that; now it’s more about cultural representation.” As Magaña reached out to people, she heard over and over that Hispanics, Native Americans, and other communities of color in Phoenix felt underrepresented, especially in the literary scene. More than just a repository for books, Magaña wanted to create a platform for marginalized voices to gather and share their stories.

When her friend Elizabeth Kennedy Bayer, founder of music non-profit Oh My Ears, approached Magaña about sharing a space in the turquoise-hued La Melgosa building on Grand Avenue, she didn’t hesitate. With a location secured and clear goals, Magaña was only missing one element necessary for any successful bookstore: books. With just a dozen or so titles on hand, including Love in the Time of Choleraand a text on herbs, Magaña reached out to friends and community members for donations to help build the store’s collection. With the help of local media, the word spread. People came out of the woodwork to donate books, express support, and inquire about hosting events in the space. From the very beginning, Palabras has truly been a community effort.

A visit by Diné artist Jeff Slim proved particularly fortuitous, garnering the store – and Magaña herself – a new partner. It was the classic tale of artist meets independent bookstore owner – and cute enough to be worthy of a John Green romcom. Slim has been making art since he was a kid dreaming of becoming a comic book illustrator, while learning the creation stories of his people from his father and other family members. 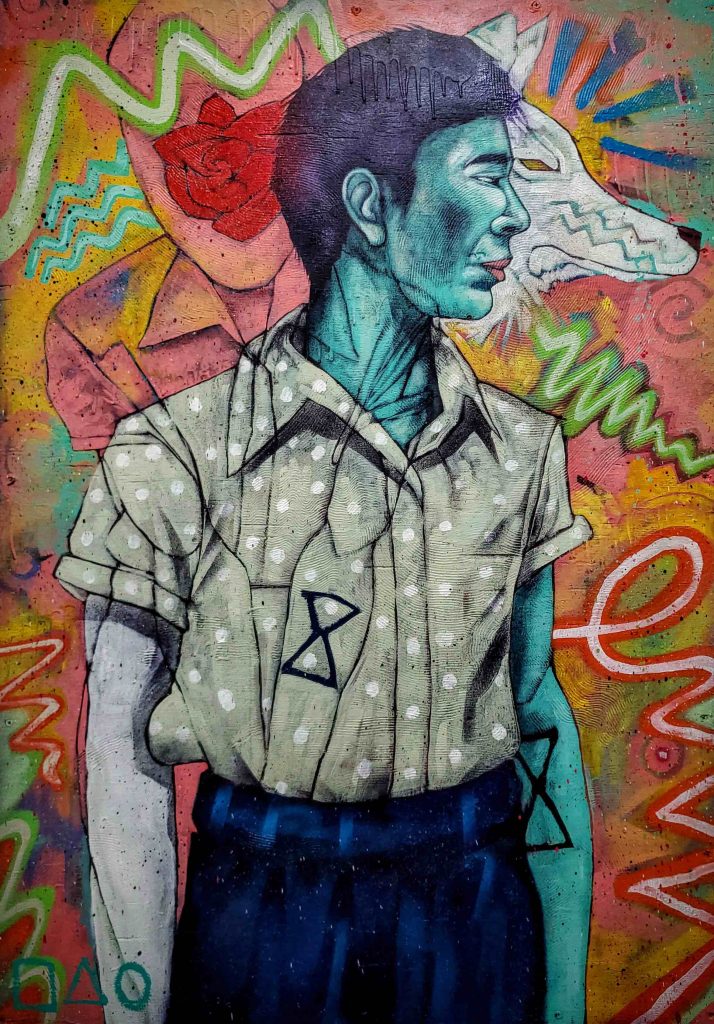 Like many artists, Slim started out by going into coffee shops, bars, and restaurants to ask who curates the art. He also obtained some early shows by slightly more subversive means, like the time he got into a gallery on Roosevelt after someone noticed his hand-painted flyers wheat-pasted around town. At 21 (he is now 33), Slim was invited to join Black Sheep Art Collective, a group of multiple generations of Native artists collaborating on workshops and public art projects and creating art for groups such as the Black Mesa Water Coalition. Traveling across the Navajo Nation one summer and into the fall, Slim had the chance to work on numerous murals. “That’s when I learned how to paint on a larger scale,” he explained.

By the time Palabras moved into La Melgosa’s storefront, Slim was already an established artist with a studio in the back of the same building. Wanting to support Magaña’s work in the community, Slim offered to paint a mural for the store. At least, that is how he recalls it. Magaña’s account is slightly different, with her proposing the mural. But regardless, Slim painted his first – but far from last – mural for Palabras. Though he refused to accept payment, wanting to donate his time to what he saw as a worthy cause, he did accept Magaña’s offers to share meals. “Because we were spending all this extra time with each other, eventually we became really good friends,” Magaña recalled, as she began to blush. “We realized we really liked each other more than friends, so here we are, years later, and now we share two cats.”

Partners in life and business, the two are now Palabras co-owners, which – after a move to a larger location on McDowell Road in 2017 – continues to expand its inventory, events, workshops, and other activities. One of their most successful events has been “POC It To Me,” a monthly open mic showcasing a variety of works from people of color (POC), everything from storytelling, poetry, and stand-up, to music. The only rule is no hate speech allowed.

The idea emerged from those early discussions Magaña had with people who felt alienated from and undervalued by the wider artistic community. She wanted to create a safe space for people of color to share their stories. Magaña initially cohosted the event with her friend Amber McCrary, a Diné writer and zine maker. When McCrary headed out of state to pursue her MFA at Mills College, poet Yolatl Perez served as cohost for a time, though now Magaña mostly hosts on her own. “It’s helped people be more open and share their work and get out of their shells,” Magaña said. “It’s the same thing for me too, because I’m totally an introvert. It’s helped us all grow as a community.” 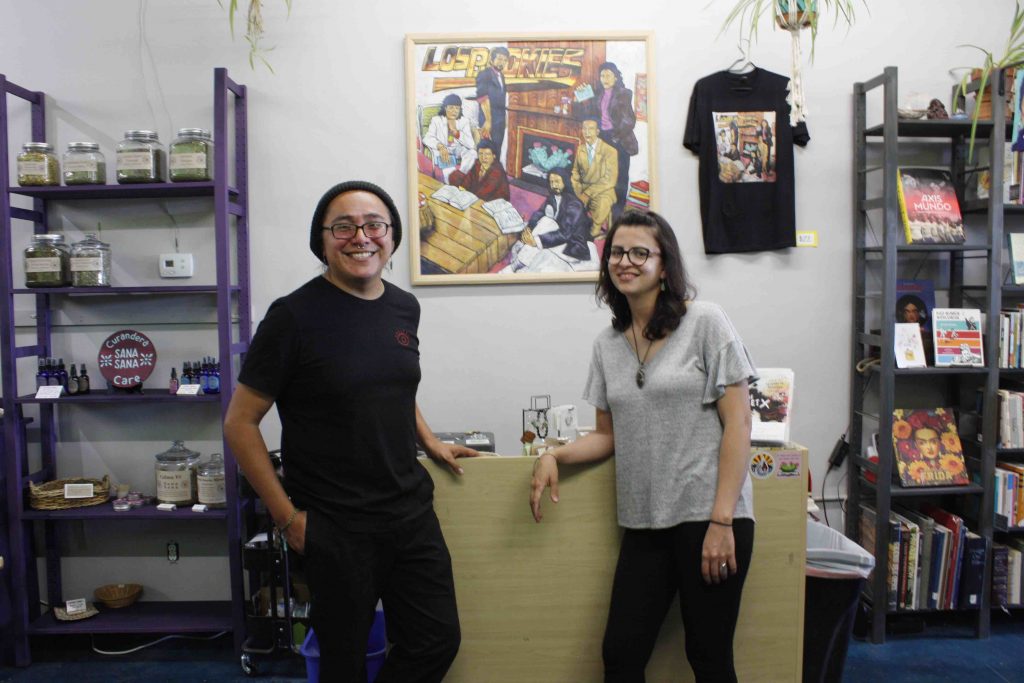 Palabras also hosts art shows for First Friday, with Slim taking the lead on these. Slim usually integrates music and other performances into his art openings, a tradition he continues at Palabras. For June’s First Friday, they will be hosting a show of photography and a series of musical performances honoring the memory of Jake Hoyungowa, a filmmaker and photographer.

Slim first met Hoyungowa, who was of Hopi and Diné descent, while the two were growing up in northern Arizona. While Slim made his name as a visual artist and muralist, Hoyungowa pursued photography and worked on films focusing on the life and rights of indigenous people, with his film The Rocket Boypremiering at Sundance in 2011. Having recently reconnected, the two had planned to showcase Hoyungowa’s photography before a sudden tragedy last month took his life. However, the show will go on, as a memorial honoring Hoyungowa’s work and memory.

Truly a third space, Palabras hosts a dizzying array of events organized by nonprofits or community members – such as Cardboard House Press, which publishes bilingual collections of writing, art, and contemporary thought from the Spanish-speaking world. They assemble their books in the store through their Cartonera Collective. 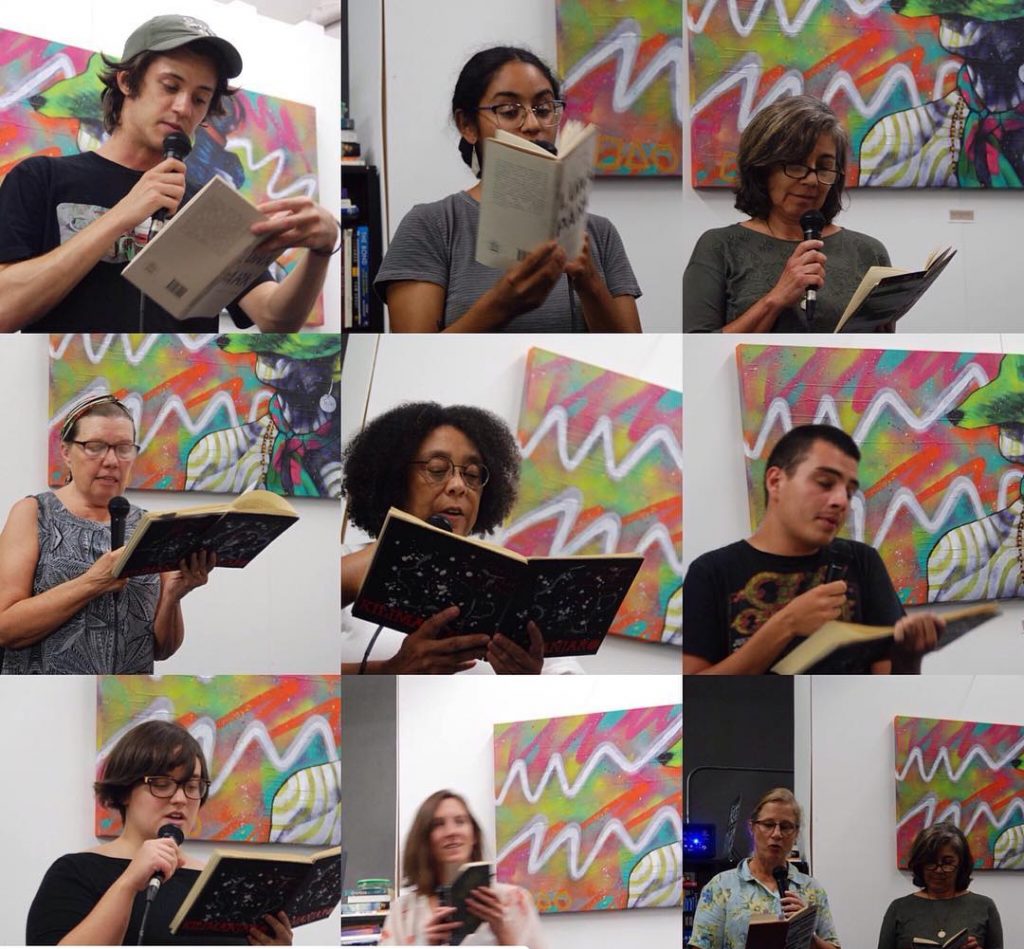 Trans Queer Pueblo, an organization that provides a range of vital services to LGBTQ+ migrants of color, hosts a writing group called Creatures of Our Dreams. Last Valentine’s Day, they held an event where they wrote letters to incarcerated individuals. William Ross, whose company Ashe International provides immersive tours of Cuba, hosts a number of events, such as a discussion of mental health in communities of color, as well as a monthly book club reading featuring the anthology Boricuas: Influential Puerto Rican Writings. The list goes on, including book launches, a Meet-up group for people interested in learning Spanish, and even self-defense classes. “We’re providing a platform for people,” Magaña said.

Palabras also helps Magaña share her other passion in life – plant medicine – through a small but growing wellness section. Her company, called SANA SANA Curandera Care, sells a range of physical and spiritual plant-based healing products such as a creosote salve, essential-oil sprays, and a range of dried botanicals. Magaña uses knowledge gained from studying herbalism at the Southwest Institute of Healing Arts as well as the teachings of her mother, who learned the folk plant-based healing known as curandero from her own mother and from nuns she lived with in a convent in Mexico. “It sounds sort of bizarre, I know, but it’s a true story,” Magaña explains with a laugh. “Growing up, it was really normal to have my mom take us out to the fields to gather malva plants for a stomach flu, especially in the winter. We’d harvest its roots and boil it for tea or put the root on a towel on our stomachs.” 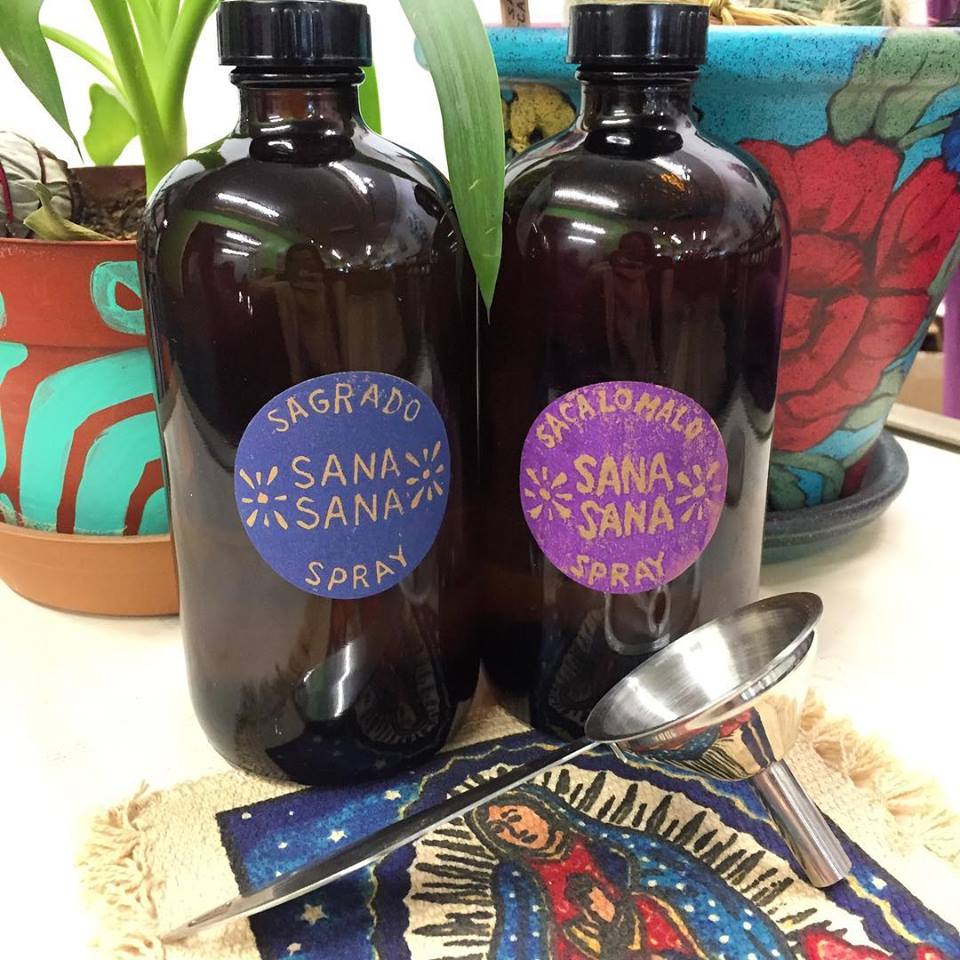 Much like the paintings by Slim adorning the bookstore’s interior – featuring the artist wearing a coyote mask while bathed in prisms of light, perhaps chimerically paying homage to David Bowie – everything Palabras does weaves together the ancestral, traditional, and modern. Whether through words, herbs, or art, Magaña and Slim work tirelessly to foster a space where people of diverse backgrounds gather to learn, create, and heal together.