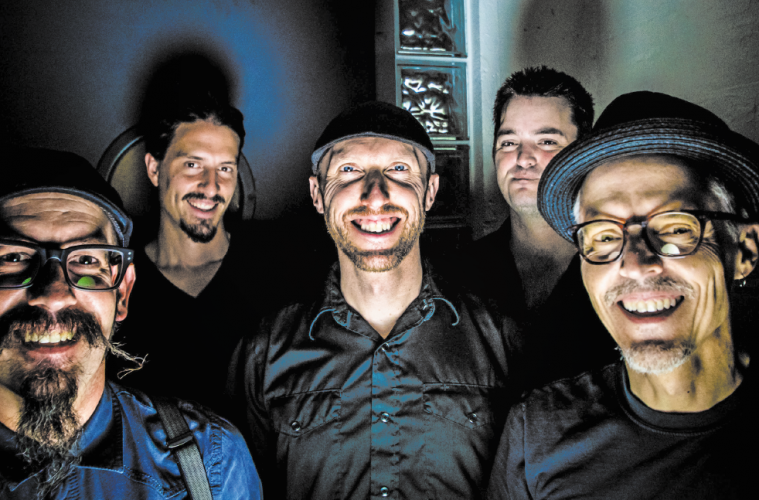 Since their inception in 2009 The Haymarket Squares have become practically an institution in the local music scene. They refer to their music style as “punkgrass,” as if punk rock and bluegrass danced together in a frenzied mosh pit. But that doesn’t tell the whole story. The Haymarket Squares also come across as something akin to liberal anarchists in their lyrics are clever commentaries on politics, modern life, religion and nearly any other aspect of our world that needs some shaking up. Every song is delivered with a telling grin, healthy cynicism and wit.
Their music is boisterous and fun, steeped deeply in American traditions of the late 19th and early 20th centuries, and delivered with the speed usually reserved for bands who incite slam dancing. It’s quite a combination whether on record or, better yet, live on stage, where the audience goes wild. They just released their fourth full-length, Light It Up, which follows perfectly in line with their previous efforts of Righteous Ruckus (2013), Dancing in the Streets (2010) and Punkgrass for the People (2009).

The Haymarket Squares are John Luther Norris (vocals, guitar, kazoo), Marc Oxborrow (vocals, bass), Mark Sunman (vocals, mandolin, accordion, piano), Mark Allred (vocals, slide guitar, harmonica) and Jayson James (fiddle). Together they make some of the most unusual and socially relevant music around today, and not just in Arizona. With the folk revival having blossomed, they are primed to garner an even wider audience with this album. Musically speaking, it’s their best effort yet and is lyrically up to par with their previous work.
In 2009 some folks might have been scared away by Haymarket Square’s bluegrass and folk roots, which now have new people flocking to them. Although they are fighting the good fight and every song is a social commentary, it never really feels like they are shouting from a soapbox. Maybe they are; maybe I just feel at home at this particular hoedown.

Light It Up opens with “Heaven,” a deceptively titled number shrouded in revivalist clothing. Musically it’s something straight out of a travelling salvation show, but that’s where the similarity ends. With lyrics like “There ain’t no heaven, got to make one here, No father, no son, no heavenly choir, Just hearts and hands and our desire” you can see where this one is going and what side of the atheist fence these chaps reside on. The more telling and more hilarious line is “There ain’t no party, let’s have one here, Let’s load a bowl, pour some wine, Read a book about Palestine.” It’s a great introduction to the album, and it’s only the start of their irreverent agenda.
“Horrible Inventions” is a fantastic commentary on the “border patrol industry.” It also has some true humanist wisdom: “You see ‘them’ as separate from ‘us,’ And don’t believe that we are ‘one,’” and later, “Don’t ask how many of them have to die, Because they crossed a line That’s only in your mind.” They make valid points for compassion, all with a beautiful bluegrass backdrop that makes it easy to swallow.

One of the topics that is close to their hearts is the plight of the workingman, which makes sense considering they are called The Haymarket Squares. (Go ahead and Google the Haymarket Riots if you are unclear on this.) This topic is first approached on “Working Reward,” with the refrain “You’re worth more than they’ll ever pay you.” The song also includes a super clever nod to the finale of the Talking Heads classic “Road to Nowhere,” but it’s executed so well you may miss it. The reference is intriguing on many levels, since they are talking about a dead-end job.
Continuing on the labor issue, “Let’s Start a Riot” is the first single from the album. It’s about stewing in your own juices in your 9-to-5 cubicle and simply hating everything about it. This is a new anthem for disaffected office workers everywhere, and it’s as true as it is funny: “We’re gonna have a party for my buddy who just lost his job, We’ll be mixing up some cocktails, My favorite is the Molotov.”

“High Demand” begins with a bit of New Orleans jazz and stays soaked in the sound of classic Dixie. This song addresses the private prison industry. It’s a complete indictment of the corrupt private prison system, law enforcement and the enormous industry that has swelled around these things. It tackles nearly every aspect of this serious problem without fail, but it’s best summed up by these four lines: “Welcome to the greatest country on the earth, For prison population we come in first, There’s only one group we don’t prosecute, The banksters that made you destitute.”

You would think that with a title like “Jump the Border,” this song would be another tale about border issues, but once more there’s a twist. This salsa-influenced number is one of the most adventurous musically on the album. It is actually about packing up your things and getting out of America before it’s too late. Throughout the song they mention options, like Canada, Mexico, Iceland, Costa Rica, Germany, North Africa, Bangkok and so on. Yet still they beg America to “move from your mirror and see the world spinning” before it’s too late.

Up next is the amusing “King Me,” which uses the guise of a monarchy to make commentary about the oligarchy we now find ourselves in, where money is the real ruler of all. It’s a portrayal of anyone with a thirst for political power and no regard for our personal rights and privacy, slowly slipping away. The song itself has more of an Appalachian feel and backwoods country vibe. It would sound great sung loud from a back porch somewhere in Georgia.
“No Such Agency” is a hilarious, swooning love song to you from your new best friend, the NSA. It’s a hilarious romp and a wonderfully danceable waltz all in one. Every moment is tongue in cheek, with lines like “Type it or talk it or sing it or sign with your hands… If you ever feel like there’s no one to lend you an ear, Never fear, I’m right here.”

There’s a complexity to “Gritty City” in that it expresses both all that is wrong with Phoenix and an actual love for the city at the same time. Many people I know have a love/hate relationship with Phoenix, but despite all the bad, it is still where we call home. That’s the crux of this song: when it comes down to it, we live here because we love this gritty city too.

“Part of the Problem” follows with the self-reflective notion that even though you are aware of all the issues and are even rallying about them, you may still be part of the problem. The entire sentiment of the song is summed up at the end perfectly: “Well it’s easy to stand on a soapbox, And tell the world what’s going wrong, But in court or the street, in this miserable heat, You need more than just catchy songs.”

One of my favorite songs to catch live is their cover of Creedence Clearwater Revival’s “Fortunate Son.” I always hoped they’d record it someday, even as a giveaway, but they actually included it on the album. This has always been one of my favorite protest songs, and I absolutely love their punkgrass treatment.

The album concludes with the poignant “Goodbye,” about how the human race has pushed the planet to the brink, and it won’t be long before Mother Earth decides her children are no longer worthy of attention and will shake them off like a wet dog. “Well goodbye, mother earth, Life-giving ball of dirt, We whored you and we raped you and we never put you first, And now we get what we deserve.”

One of the things that stands out about Light It Up is that, while this album is just as socially conscious as all of Haymarket Squares’ others and certainly just as irreverent, this one seems to have a more timeless quality. Some of these songs would have been relevant a century ago and some might be meaningful in hundred years—though I hope not. The band belongs to a lineage of folk singers and rockers that have fought the good fight, the likes of Woody Guthrie, Pete Seeger and Joe Strummer.