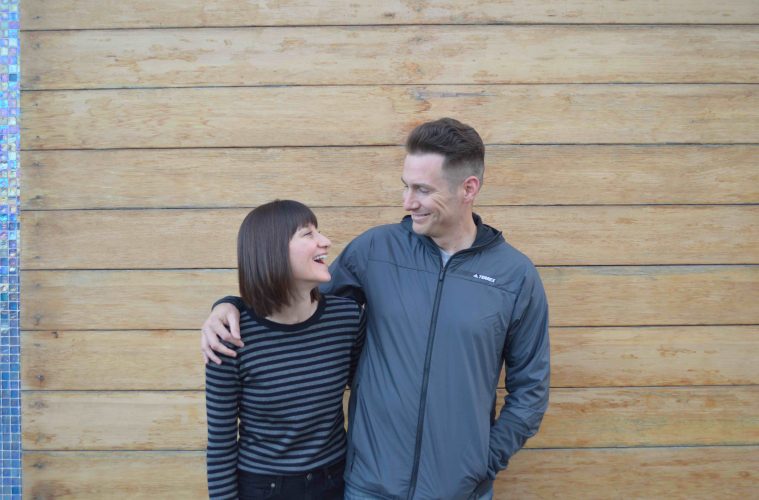 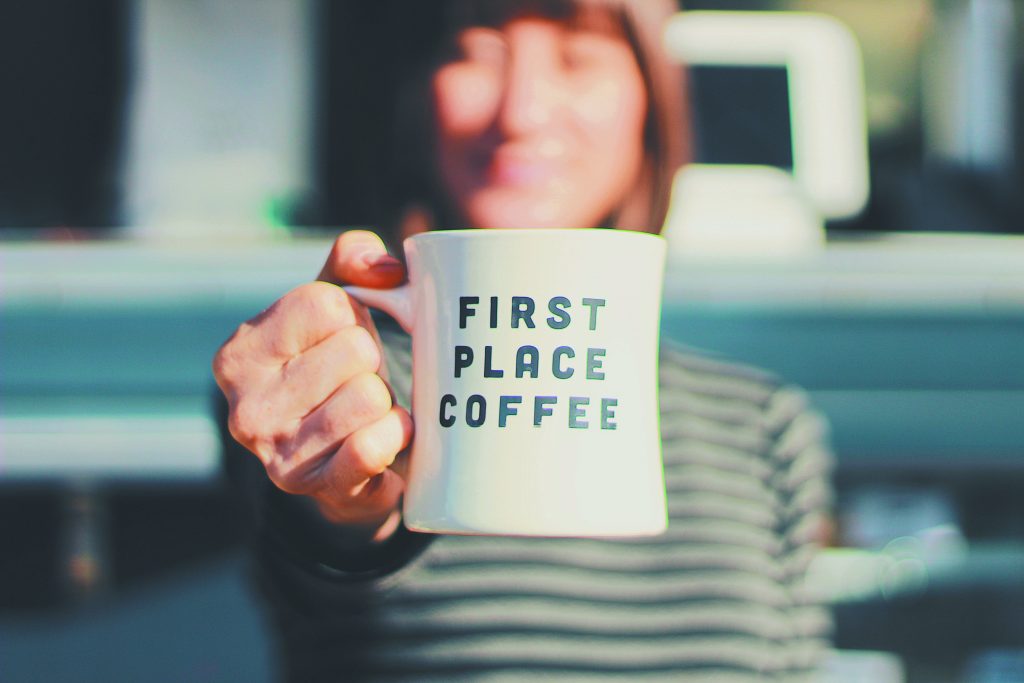 “Take me on an adventure” is one patron’s request at First Place Coffee on a cloudy Saturday in January. Parked outside Phoenix General and Framed Ewe, the coffee truck draws the curious, eager to try something new, as well as regulars who track down the truck daily for their usual.

The request for adventure is fitting for the truck’s owners, Terrence Murtagh and Devon McConville. Not only because you won’t find this coffee shop in the same spot two days in a row, but because it’s a resolution set by the couple, who rejected their comfort zones and now manage four businesses that they would rather consider fun hobbies.

The bright-red-and-navy coffee truck frequently parks at Rebel Lounge on Indian School near 24th Street and at the WebPT headquarters in the Phoenix warehouse district. First Place Coffee has also served drinks at such diverse locales as the FORM Arcosanti festival and more recently the Willo Luminaria fest. The business just celebrated its first anniversary on February 2. McConville canbe seen behind the wheel and counter of the truck four to six days a week serving unique drinks and cool vibes.

In addition to co-owning First Place, Murtagh is probably best known for Heavy Pedal – an apparel and equipment brand that has been serving the bike-riding community, both locally and globally, since 2009. Murtagh has two more companies: Brand Overture, a web design business, and Self Champ, a personal development venture. While they might seem dissimilar, both are about helping Murtagh’s clientele to improve and optimize. 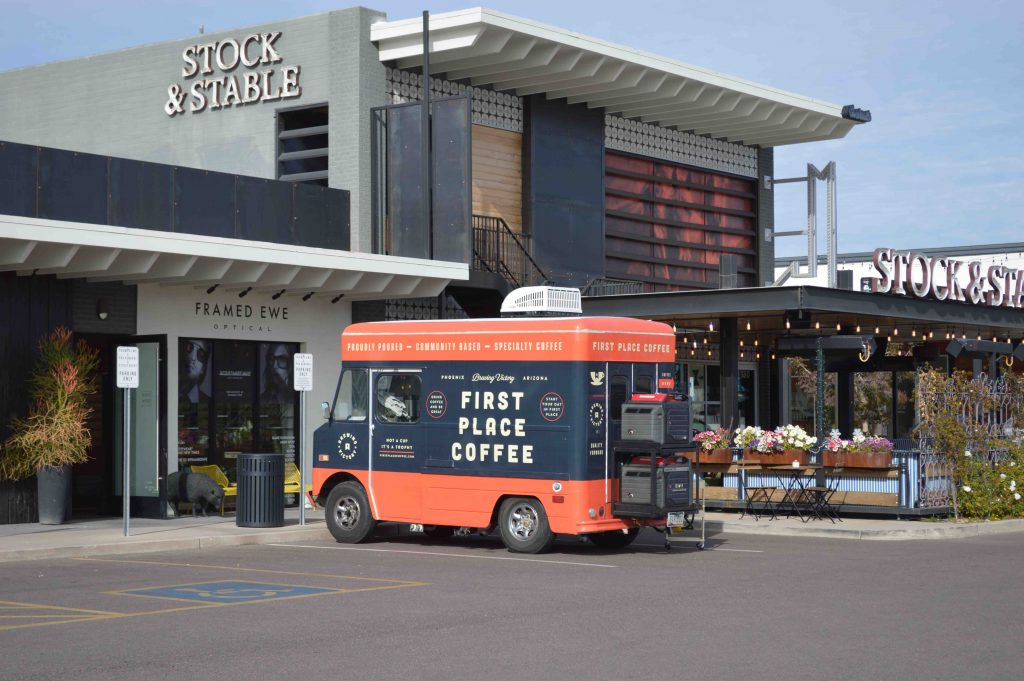 McConville defines herself as a leader, loyal and positive. Murtagh echoes this, saying she is dependable, reliable, strong and smart. You can see these traits in how she runs First Place Coffee. She is unwavering, cool, calm and collected, yet shares constant warmth.

She describes her fiancé as adventurous, brave, hilarious, determined, spontaneous and entrepreneurial. Yet when asked, he prefers different adjectives: studious, a learner and also a teacher.

You can see McConville’s description of Murtagh in his brands: just check out Heavy Pedal’s social media or his Self Champ website. Entrepreneurial seems like an understatement. His energy is present throughout his multiple businesses. But you can clearly see Murtagh’s description of himself behind his professional front – and when he’s near McConville. Next to her, he is attentive, quiet, listening, looking to her for information and confirmation, while giving her time.

McConville and Murtagh complement each other: Murtagh brings big-picture thinking and entrepreneurial spirit, McConville, attention to detail and practicality. In their collective businesses and in their relationship, Murtagh is the writer, McConville the editor. Murtagh prompts a grand vision, McConville makes it fit with the business model. They use their strengths to support each other in their ventures when it is most needed, as well as in the small daily tasks that often go unseen. 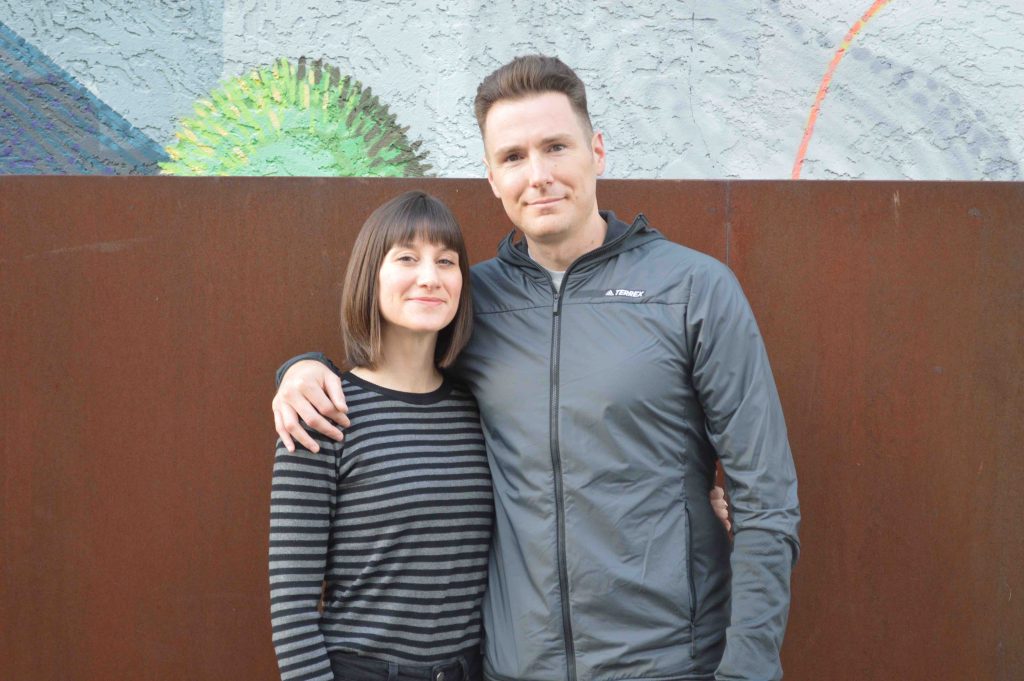 The couple has known each other for at least fifteen years and have been dating for eight. They met while Murtagh was writing (legal) graffiti near the now-closed Alice Cooperstown, and McConville watched him transition from a bike junkie and graphic design student to the entrepreneur he is now.

Their romantic relationship started as a long-distance one after Murtagh moved to San Diego to work for a bike company. He returned to Phoenix to start Heavy Pedal one year later. While he moved dynamically through life transitions, McConville exhibited stability in her employment with a position in finance.

They’ve both had plenty of experience in supporting each other’s start-up businesses. At the beginning, McConville provided the security cushion for Murtagh to start Heavy Pedal – as well as her name, under which the company was legally founded. She played a tremendous role in setting up the first brick and mortar shop, as well.

She also helped keep things afloat when Heavy Pedal was drawn into a lawsuit for violating a non-compete agreement, with unfounded claims of stolen trade secrets. Although Murtagh and his brand ultimately won the lawsuit, the deposition and legal proceedings halted Heavy Pedal’s sales for a year. 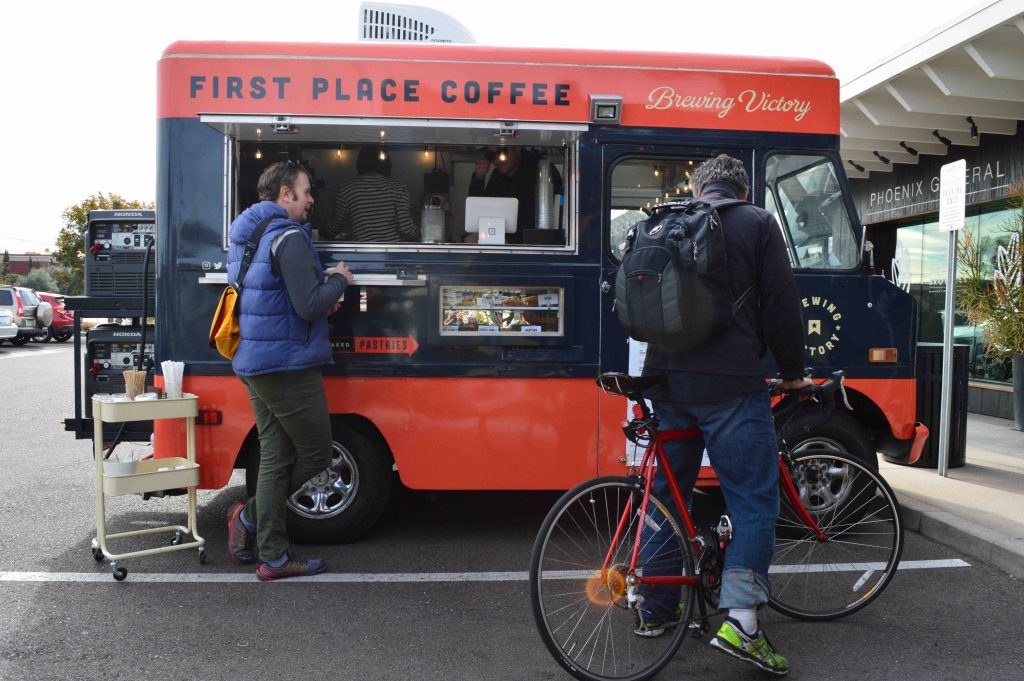 Murtagh couldn’t forgo an income during that time, so he started working for a local company doing web design and online marketing, and wound up in a rut. He was tired of building up companies that weren’t his and wanted to use his skills to help others. From that, Brand Overture was born, and Self Champ followed to help people with more than just their website.

McConville serves as the editor for all of Murtagh’s written work, reviewing and refining his stream-of-consciousness ideas for public consumption. Meanwhile, during her eight years of working in finance, McConville suffered from a lack of fulfillment. The highlight of her workday was her trip to the coffee shop, and one day it finally lit a spark. She took the first leap “away from the misery” and joined the team at Royal Coffee Bar in 2015.

She became enamored with the coffee business and connecting with passionate people. She put her heart and soul into learning the craft, and it wasn’t uncommon for patrons to assume she was the owner. Like Murtagh, though, she strived for true ownership, and knew she was capable of achieving it. So after a few years, she took the leap.

When McConville was ready to start First Place, it was Murtagh’s turn to provide the financial support, with Heavy Pedal going strong for almost ten years. Like his fiancée, his role wasn’t just financial stability (she insists he contributed more to First Place than she had to his ventures). Most important, he provided much-needed motivation for McConville to take her first serious plunge into entrepreneurship. 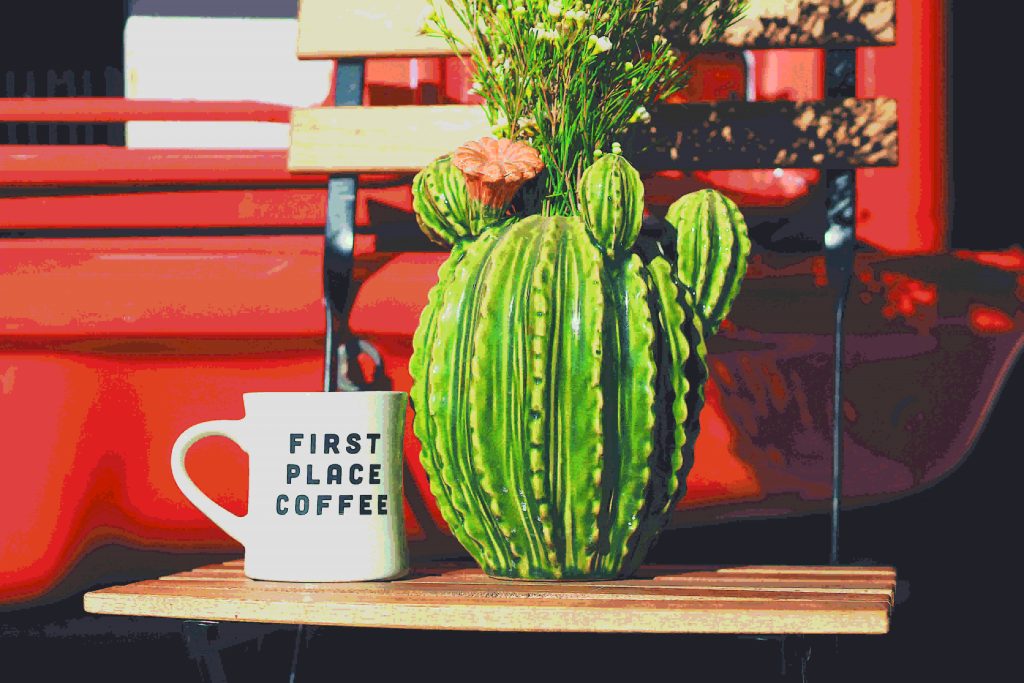 Murtagh not only pushed her to just start something, he helped her define her vision, and used his client work and Heavy Pedal audience to help fund their progress. (They discovered that the cycling community and coffee go hand in hand.) They worked together every day building the coffee truck after acquiring it from their friend Ariel Bracamonte, who owns Cobra Arcade Bar. Together they turned a cute but out of service Chevy P10 into a completely functional specialty coffee shop on wheels.

They worked hard to get First Place Coffee onto the streets, and Kickstarter got them through the final stretch. Murtagh then set out to handle the design, marketing and social media for the company. He works mostly in the background of First Place, which makes sense since he has his own businesses to run. “I’d just have to hire someone,” McConville says to her partner with a laugh, when asked what would happen if he was no longer involved. “But if you weren’t around in my daily life, that’d be really sad.”

“We really had this desire to create community. That was always really important to me; that was my main focus,” McConville says. She maintains that First Place has been and always will be a community-oriented venture to promote happiness through coffee.

Murtagh’s professional purpose seems at first a little more internalized. Heavy Pedal is a way to access his loves of fashion and cycling, while Brand Overture helps him constantly sharpen his axe. All his business concepts arose from a personal passion or need for fulfillment. But he is anything but self-centered. He wants to help others and connect with his community. Self Champ, particularly, is his way of giving back, by offering coaching and techniques learned from years of overcoming adversity and depression.

McConville wants First Place to go with the flow in 2019 and establish their retail sales, but her fiancé also hinted at finding a brick and mortar location for the business. Ultimately, McConville made her great leap in 2018, and this year, as they celebrate First Place’s anniversary, they want to step back and really let it sink in. 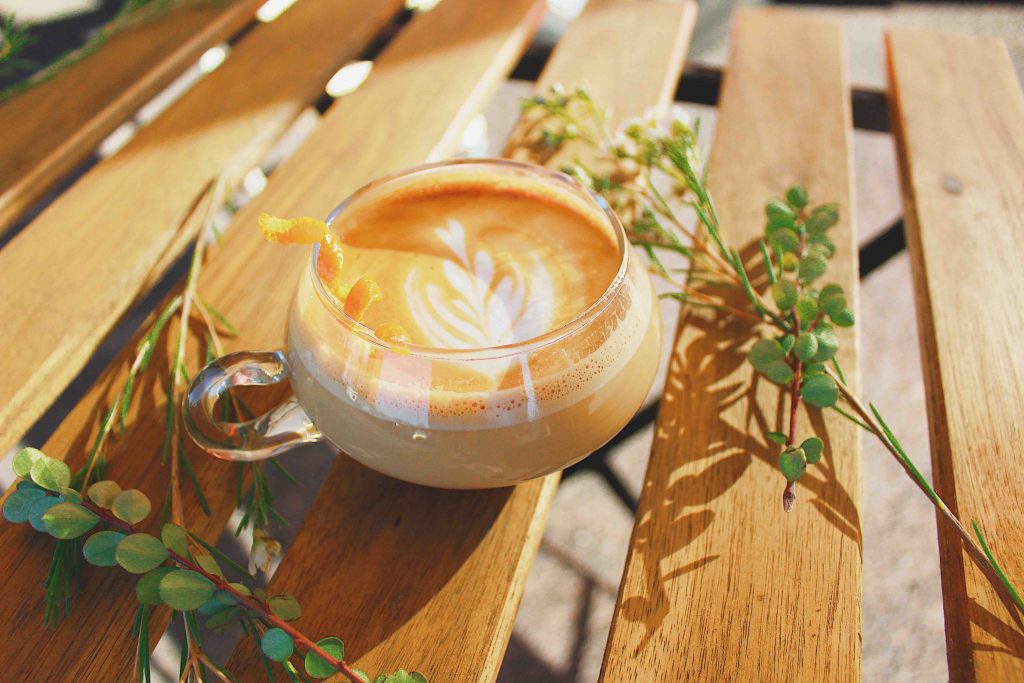 Whatever struggles have arisen from their endeavors, the couple maintain a steady mantra of not thinking about their jobs like they’re jobs. “We’ve been focusing on trying to make every aspect of the truck a fun thing: fascinating, instead of frustrating,” Murtagh says. McConville confirms, “It’s important for us to have adventures and fun – that’s just how we are, and it naturally translates to the way we want to run our business. Coffee, especially, should be fun.”

One of McConville’s resolutions is to perfect the balance between hard work and well-being. The couple injects their daily life with adventures, which can take many forms, like horseback riding on the first day of the year, not sweating it when the espresso machine breaks down, taking semi-spontaneous trips, and driving around town to manifest a shop location. Most important, adventure comes in the form of being completely open to where this business venture takes them.