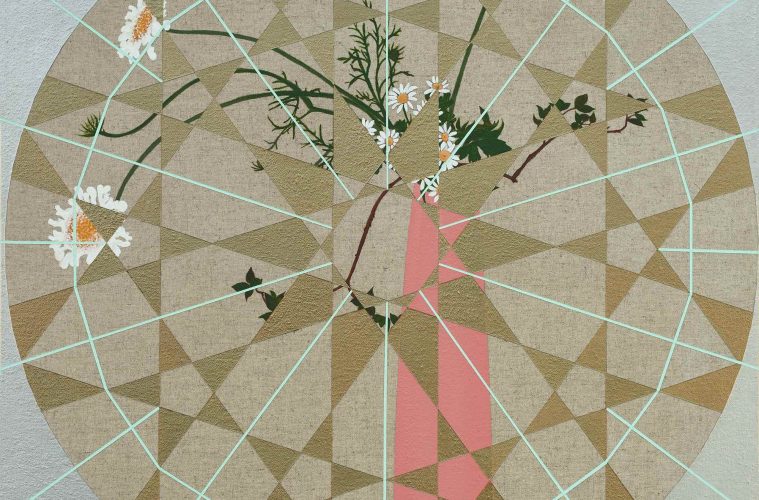 Carrie Marill has seen her art star rise over the years with every new person who encounters her work. Her exhibitions are unlike anything else that you’re likely to see in the artworld today, and her current show, Protective Vulnerability, is no exception. Moroccan-inspired patterns, shifting geometries, delicately rendered still lifes, and subtle allusions to spirituality all abound in this solo show about an intimate passage in the artist’s life this last year, one that included the loss of a parent. So, when we see the radiant golds and selective touches of silver mixed with the motifs of nature morte, we know that this exhibition is about the vicissitudes of how we experience our mortal coils.

After all, we are inextricably interwoven into one another’s lives from birth, both by pattern and design, and this seems to be the starting point for understanding Marill’s recent body of work. This can be seen in the diptych “Profound Mystery Forever,” which shows us a series of geometric shapes overlapping distinctly different flower types. One of the largest works in the room, it serves as a key that unlocks the ways we can interpret the rest of the exhibition, mixing folded isomorphic models of sacred geometry with naturalistic representations of figures in bloom. It is perhaps no surprise, then, that an image about duplicity and design, archetype and variation, universality and its singular forms of expression is itself situated on two mirrored canvases, making the union of form and content seamless.

Thus, when we happen upon paintings like “Alchemy,” which has a radiant pyramid overlapping the profile of a woman’s silhouette placed within a starburst pattern, we are quick to connect this particular image with a similar design from a second painting in the gallery, “Show What’s Hidden.” This is because the center of the spirit, often associated with the pineal gland in humans and the seed in plants, is obscured or subtracted from both works. Instead, it is concealed by geometric formations that point to an unseen center that abides in all life and forms. It’s the animating principle, or that substance which is the proper subject of all alchemical operations.

By contrast, when we encounter a painting that does reveal unabridged forms, it often uses the same pictorial strategy in reverse. Rather than being overlaid with graphic elements, these pictures of plants evidence a series of blossoms that have been replaced by touches of golden firmament in the abstract. With titles like “Every Experience in Us” and “Learn How to Fall Apart,” one cannot help but feel that they are metaphors for a life lived and the golden memories that are interwoven among the foliage, however sparse, disparate, or fleeting.

Works like “Heart Shield” tell something of a different story. While nearly everyone has had to adopt a protective disposition during certain periods of life, the iconic power of this work transmits the feeling of a withdrawn passage perfectly. Composed with a gold and brown X transposed over a grid, it is a symbol of absolute censure. No permissions are granted in terms of moving into the image, either pictorially or emotionally. Here, the strategies of the overall, the grid, and the strike-through are combined to make a pictorial experience about distance and delimited presence.

The painting “The Love Inside” strikes a completely different note in the show. Pinks, greens, purples, and blues pop out from this canvas in what feels like a fractal unfolding. Crisp contours make the counter-punctual composition feel more active and expansive. The secret of the show may be that this small but energetic work is really the centerpiece of the exhibition, acting like a hidden gem whose geometries permeate the other configurations on display. As an image that is equal parts diamond and daemon, it functions like an allegory about the impenetrable part in each of us that allows everyone to thrive and survive, or to be withdrawn from unnecessary pressures before we break.

When placed alongside the rest of the works in the show, it becomes clear that Marill has given us a suite of images that play with the delicate pictorial dance between subject and substance, representation and abstraction, geometry and naturalism, by helping us to read between the lines. And maybe the very best parts of both art and life are about just that, learning to read between the lines – between things said, pictured, and felt – a little more carefully.